As much as I enjoy trying new marks, there’s always that fear of blanking, knowing full well that you can pretty much guarantee a catch at another mark. I’d kind of got myself in a rut this past year so it’s been good to venture further afield, testing out some new venues. The previous day had proved quite fruitful so I decided to try another spot in the Bristol Channel. As expected the water was very muddy, a combination of spring tides and being further up the Channel itself.

I took along a good selection of bait, hermit crab, mackerel and unwashed squid. I keep my bait frozen, only taking out what I need. This usually means that there’s a handful of squid, a single mackerel, etc, in my bait box at any one time. I can happily keep bait frozen for several hours, taking home and re-freezing what I haven’t used.

Below is a photo of my ‘working box’ which is situated between my legs at all times. It contains a selection of baits, bait elastic, knife, baiting needle and an assortment of weights to cater for the every varying tidal flow. 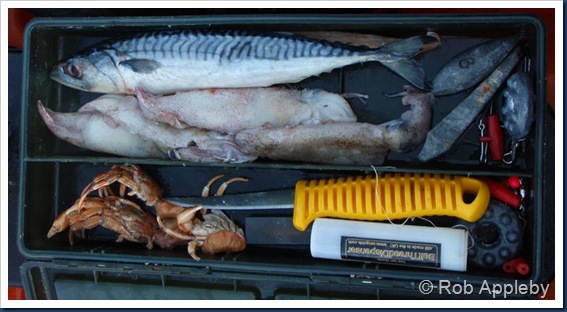 The fishing was quite slow to begin with, though eventually a couple of smaller sized Thornback rays came to the kayak. The tide flow was strong hence retrieving even the smaller dogfish was quite hard work. 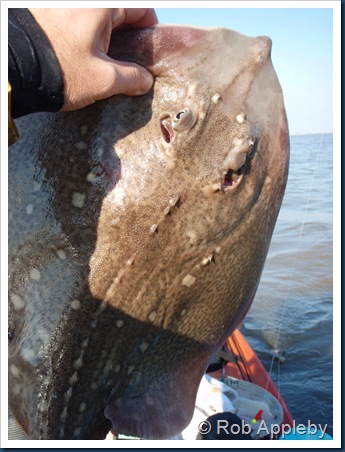 As per the previous trip there were some very small Tope caught, pretty to look at, though not the big adults I was hoping for. 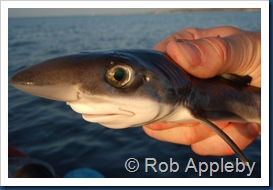 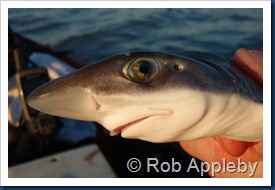 The Dogfish were once again being a real nuisance, it really does amaze me what they manage to ram into their mouths. I can’t possibly believe that they can actually chew what they attempt to eat, surely the chance of succumbing to a slow death as a result of trying to eat these baits must be a real possibility. Here’s what I mean……… 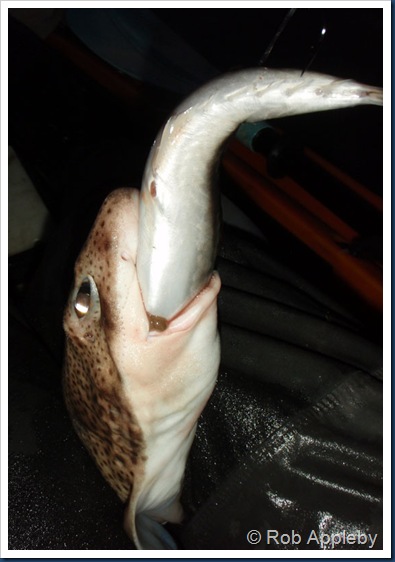 There were some small but firm taps on one rod. I knocked it into free spool and let the fish take some line before tightening up and setting the hook. Whatever is was stripped line from the reel at a steady pace. Every time I managed to recover a metre of two of line a few hard runs saw several times that taken from the reel. The tide was still running hard and from the strong head shaking I was fairly sure it was a Conger eel on the hook. My concern was that i was only using 80lb monofilament and the longer this fight went on the higher the chance the line would part. After ten minutes the fish was under the kayak, well 20 metres under the kayak.

It eventually appeared on the surface and it was a really good size. It still had plenty of life in it and went under the surface a few more time before I finally got it alongside. Despite being a somewhat ugly fish, it was a beauty!… very pleased 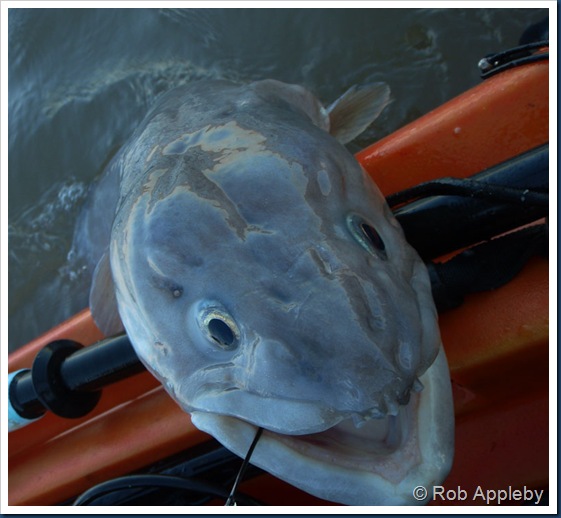 I lost a few fish during the session including a couple more decent eels during the slack water period, no complaints though. I watched the sun go down and waited for the tide to turn onto the ebb before paddling the half mile back to the beach. 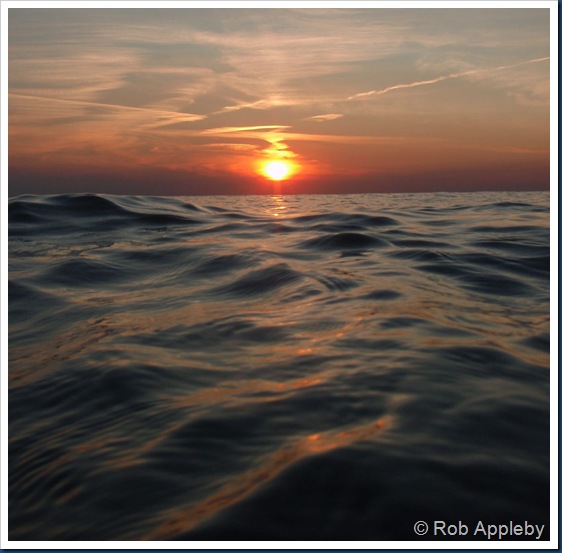 Another enjoyable session, I didn’t catch the large Tope I’d been looking for though I wasn’t in a position, nor mood, to complain about it !

Excuse my ignorance, but what is the big deal about the Tope? Are they tasty? Hard fighters? Also that eel looks huge! How long was it?

Tope are a small shark that grow up to 60-70lb, though exceptionally they have been recorded as reaching 100lb. They are very hard fighters!. During the summer months they can be caught in multiple locations around the UK within easy reach or the kayak, even by the shore angler.

The eel was a good size, I'd guess around 30-35lb, hard to say. Length?, not sure, maybe 5'. They are fantastic fighters, and their ability to swim backwards makes for some interesting fun, especially once next to the kayak.

Hard fighters are good! I caught some shark around here yesterday for the first time and it was fun at first but then they got boring and kept breaking my rigs off. I was targeting tarpon. I saw several.