Swanage Bay - A day of Rays

As last week had progressed I'd finalised plans with Ian Harris to meet up and spend a day fishing around Swanage Bay. The forecast was good, exceptionally good for this time of year in fact, with temperatures forecast up into the mid-twenties!. I've only fished Swanage Bay once before, it's a very picturesque location that's well known for producing many species of fish. It's one of the UK's better known Black Bream hotspots as well as having a reputation to producing sizeable Undulate Rays.

I've never caught the latter species so I'd planned to target rays with the hope of connecting with an Undulate Ray. My other main target was the Black Bream, a 4lb+ fish would have gone down a treat!

I'd originally planned to arrive there at around 0730, it taking the best part of two hours for me to travel there by car. However, Ian called me the night before suggesting that we get there for around 0530... yup, that was going to mean a crazy early start!. But hey, those early morning sessions can be some of the best, so I begrudgingly set my alarm for 0300 having packed the car with only the kayak left to load. I think I woke around 0230, watching my clock work it's way towards 0300, I knew I was going to suffer later in the weekend for this.

By 0330 I was driving, awake, awake enough to drive safely. Fortunately it was mainly a highway cruise with the roads being very empty, relaxing. That said I was getting down a dip along the New Forest section of the highway. As I rose up from the dip the headlamps illuminated the rising section of the road and there was a deer stood on the central lines, literally 15-20m ahead of me!. I had no real time to react, though fortunately it remained motionless as I shot past at 70mph!. It could have easily bought my fishing trip to a rather premature end!... I was 110% awake by that point.

I arrived at Swanage just after 0500 and started to rig up, with Ian arriving just after me. We rigged up at a leisurely pace, hitting the water a little later. This truly is a cracking venue, beautiful to look at, steep hills around the corners of the bay, dropping down to the old resort of Swanage in the middle. It just screams fish and reminds me of the old stories within the fishing books written by Hugh Stoker.

It was a rather slow start to the session. I'd initially begin to drift the rougher ground for the Bream, fishing a two hook paternoster rig with small squid strips attached to size 4 forged hooks. I missed several aggressive bites which I assumed had to be small Bream. I eventually hooked up with one of the culprits which confirmed my suspicions. 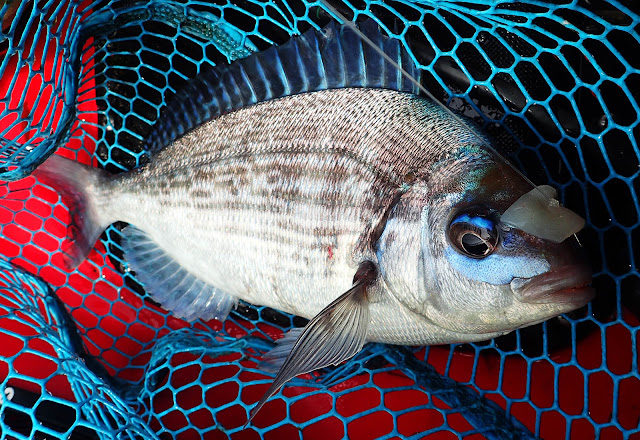 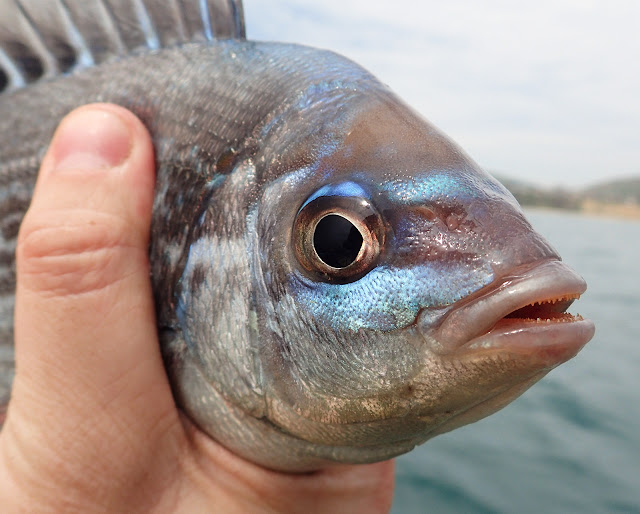 Though they clearly weren't there in any numbers as I really struggled to locate any further fish, missing the odd hit over the next hour or so. My enthusiasm began to wain somewhat with only a small Pollack to show for several drifts, so I changed tact and anchored up so I could fish with ledgered baits. I decided upon an area immediately down tide of a reef, fishing straight onto clean sand. The thinking behind this was that any 'food' being washed of the reef would arrive here first.

I fished two rods, one baited with whole sandeel, the other with half a fillet of mackerel. Both were rigged Pennel style to size 3/0 Sakuma 545 hooks. I do love these hooks, not only are they strong, they are extremely sharp. Trust me, I have fingers like pin cushions that will testify to this!.

I didn't have to wait long before my sandeel stirred up some interest. A Spotted Ray took a fancy to my bait and was another species for the day. They are very pretty to look at, always nice to catch. 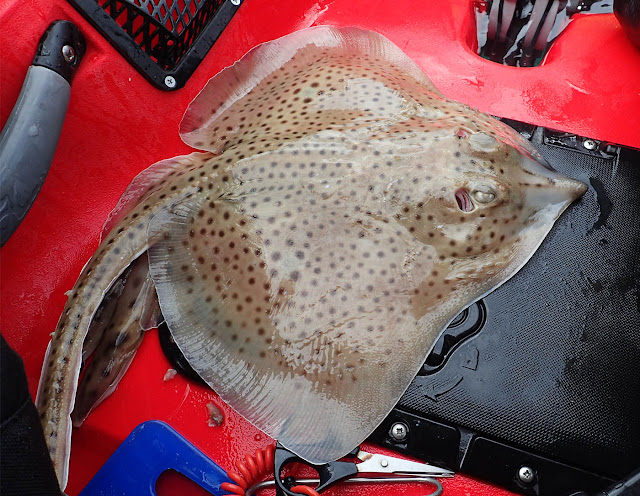 The next half hour was ominously quiet, though one rod tip began to nod in a typical Ray fashion. I picked up and immediately felt the weight of a decent fish. It certainly fought far better than any ray that I've caught in the past. As it surfaced I could see that it was an Undulate Ray!, though it had second thoughts and ripped line from the reel, straight back down to the bottom!. My 6-8lb Shimano Beastmaster rod was bent right over at times, this is fishing at its best.

With it safely aboard it was time to briefly admire this beautiful ray, though my wife later commented that it was butt ugly. I guess that beauty is perhaps only the eye of the angler. I guessed the weight of the fish to be 13-14lb. 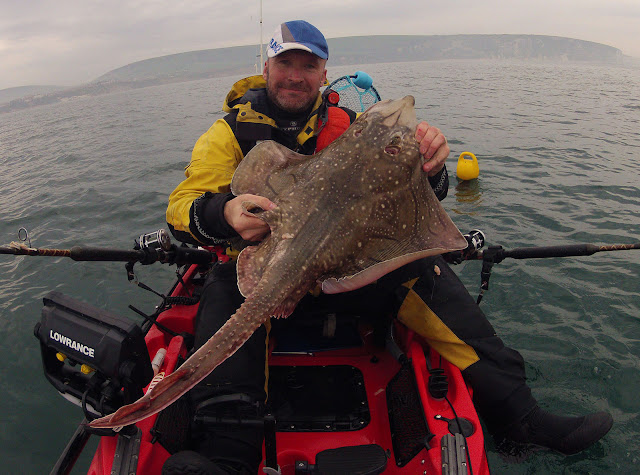 Halfway through bringing that ray to the surface the other rod pulled hard over, another ray, double hook up!. I slackened the drag on that reel, retrieving it one the first fish had been safely released. It was another fine Undulate Ray. Moments earlier I'd never caught this species, then I'd clocked up two in as many minutes.

After a short flurry of dogfish that refused to leave my mackerel bait alone, I found myself hooked up into yet another ray, another Undulate to be exact!. As it came up to the kayak I made a leisurely grab for the fish. Just as I touched it the hook pulled out and the fish slipped out of my grasp. That's fishing and it made me chuckle. I'd touched it so I'll claim it.


I gave Ian a shout over the VHF to let him know that I was having some good success. He pulled anchor and headed over to my location just in time to see me catch my fourth Undulate Ray of the session. Thank you Ian for the photo! 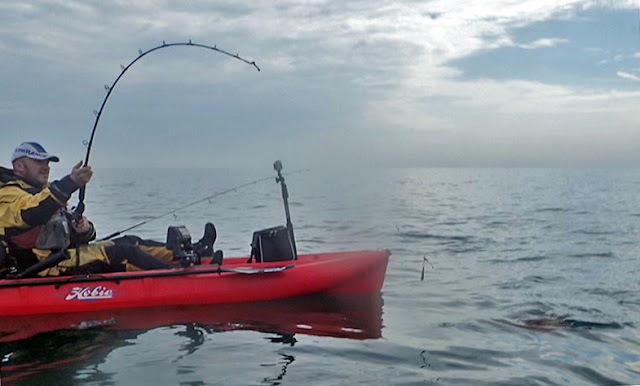 I guessed the weight at around 12lb, though Ian had his scales handy so I gave it a quick weigh, it coming in at 11lb 12oz. 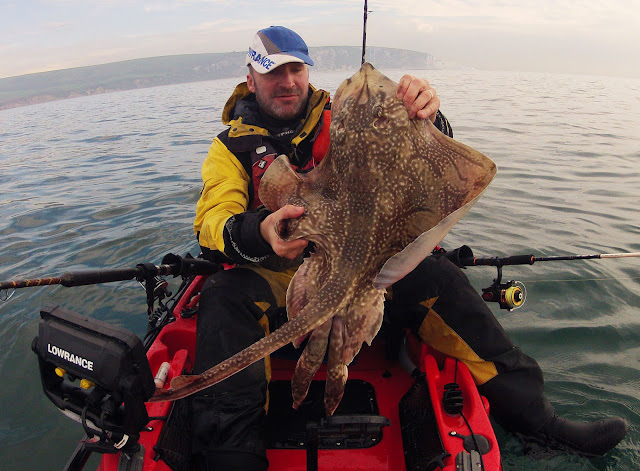 It then went rather quiet, I blame Ian, though it may have been due to a slackening ebb tide!. After a while I found myself getting bored so I pulled anchor and headed northwards, anchoring on the uptide side of a reef. I fished my two hook bream rig with a light weight, allowing it to drift onto the reef.

Below is a screenshot from my Lowrance HDS7 with StructureScan selected with the reef clearly visible. It clears towards the top as I'd passed over it prior to dropping anchor. 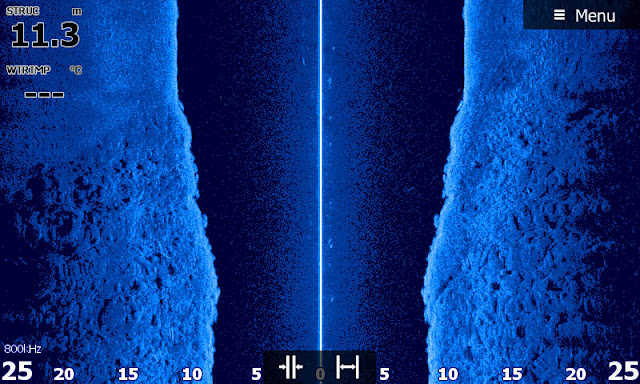 Despite a couple of small rattles it was slow, though I did eventually hook up into a better sized Bream. Once safely netted and aboard I took a couple of photos before watching it swim away strongly. I know these make good eating, but I'd rather they breed and live to fight another day. 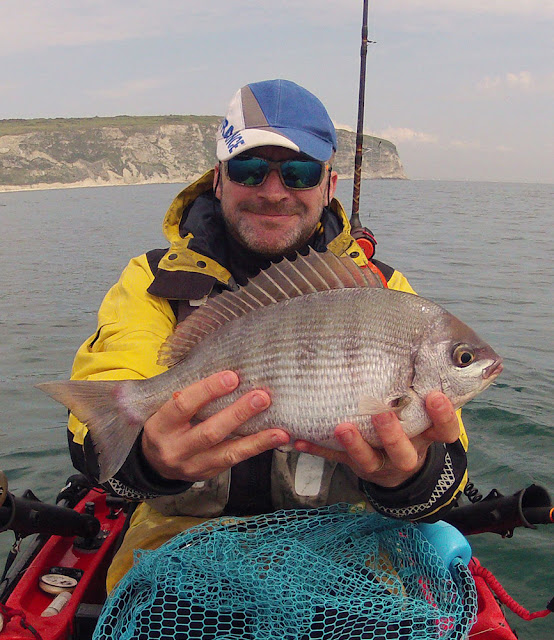 Below, a slightly premature release as it was clearly keen to get away! 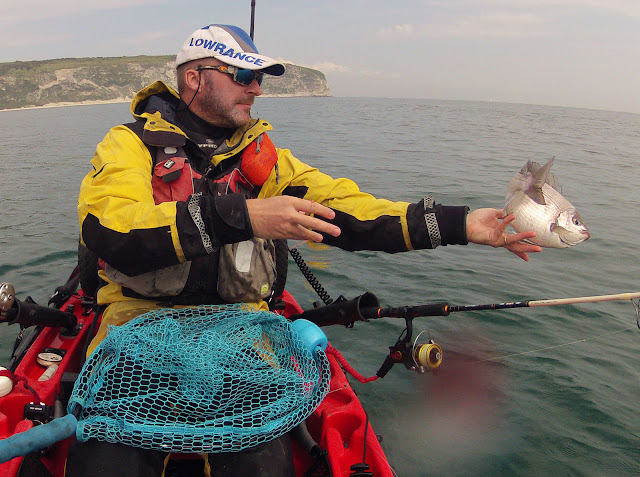 That was the only Bream I caught from that mark so once again I pulled anchor and decided to drift over a wreck off to the Northwest. There was a little structure with some small fish returns. They were indeed small with me only managing to catch a couple of pouting. Still, another species for the day. 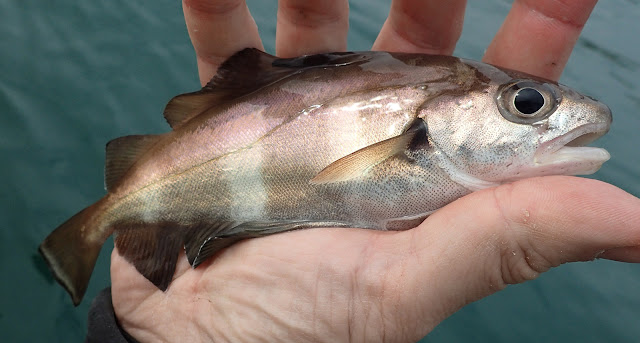 Clearly the structure was holding no sizeable fish, at least nothing that wanted my bait, so I headed further North to Ballard Point where several boats were already fishing. I drifted around for perhaps an hour without so much as a tap. 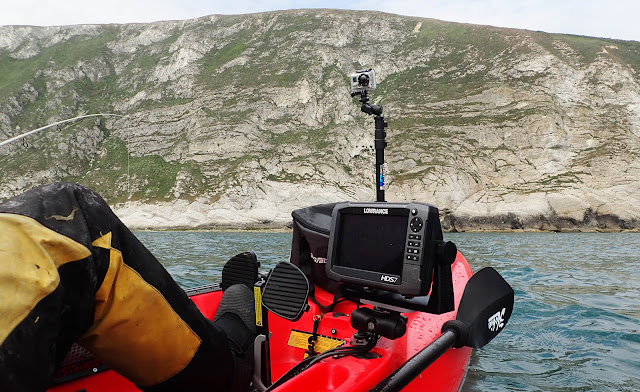 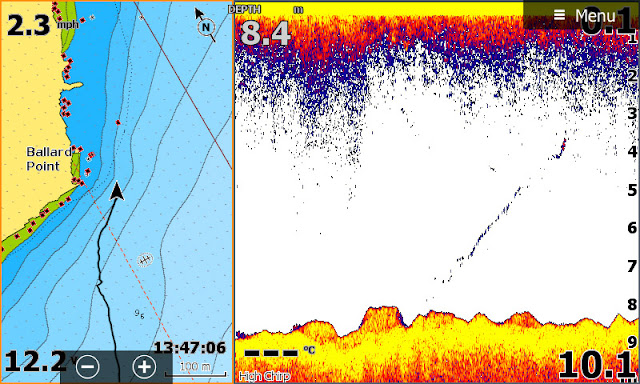 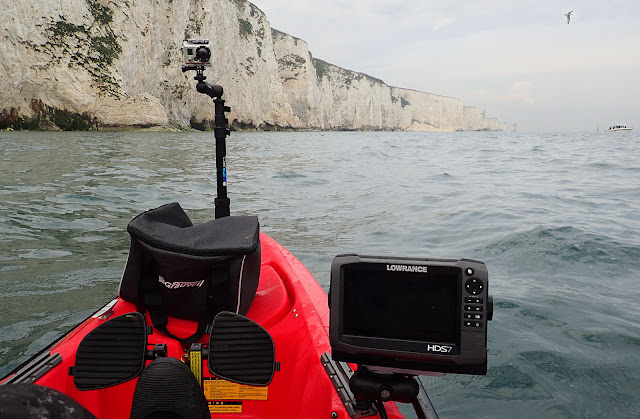 The sea became increasingly choppy so I decided to had back into the bay. That turned out to be a wise decision as it was somewhat unpleasant for a couple of hundred metres as I came back into the bay itself.

I resumed bait fishing, tying myself off to a large pot buoy. It was desperately slow, though I did manage a couple more Spotted Rays and some Dogfish. 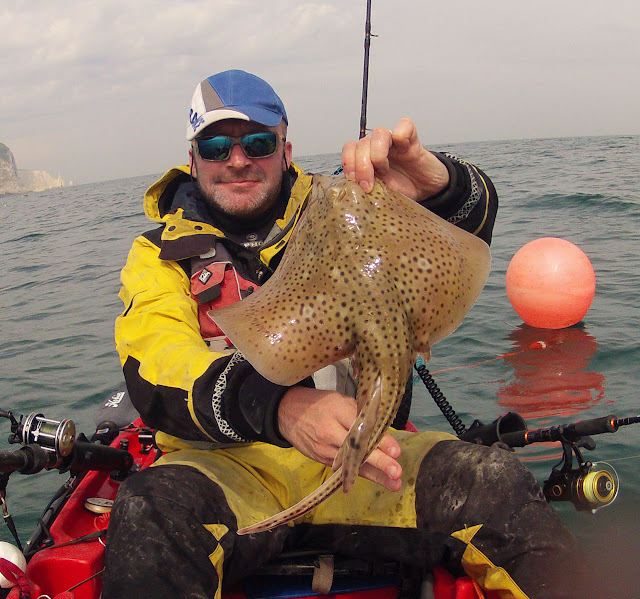 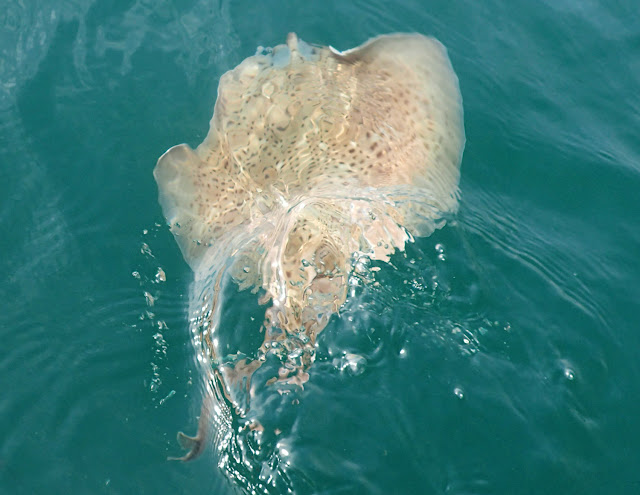 By this time I'd been afloat for around 10 hours and with the sport getting slower by the hour I decided to quit whilst I was ahead. After a lazy pedal back across the bay, just enjoying the scenery I was back on the beach. The beach however is soft and stoney and the trolley dug in halfway up. Fortunately a couple of holidaymakers gave me a hand to pull it up the beach, otherwise I would have ended up partially de-rigging it. I did make a mental note to take my beach trolley with the large floatation wheels next time I choose to fish this venue.

It had been a great day, both fishing, company and weather wise, I'm sure I'll be fishing Swanage again quite soon!
No comments:
Email ThisBlogThis!Share to TwitterShare to FacebookShare to Pinterest
Newer Posts Older Posts Home
Subscribe to: Posts (Atom)