I have a small dive reel that holds approximately 90m of 2mm cord which I use as my anchor reel. The photo below shows my current setup. 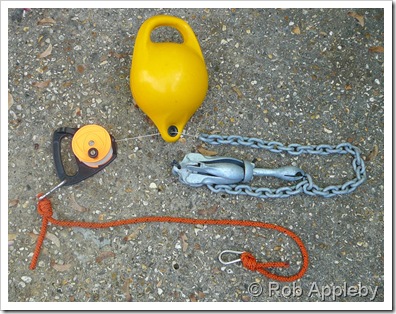 Due to the fairly strong tides that are experienced in the area that I tend to frequent, that tends to limit my maximum fishing depth to around 20-25m. That’s working on the theory that I let out three times the depth in anchor warp once the anchor has touched bottom. I.e, if I’m anchoring in 20m of water, I’ll let out an additional 60m to ensure I hold bottom in a strong tide. That’s 80m of warp for anchoring in 20m of water.

Most of my fishing takes place in 5-20m of water so my current setup has always proved more than adequate. However, in the summer I had an opportunity to fish the deep water lochs of Scotland in an attempt to catch a common skate. That trip didn’t materialise in the end, though I did prepare fully, which resulted in me producing an anchor reel suitable for deep water anchoring.

I’ve seen several setups over the past few months to cater for deep water anchoring, none of which seemed totally ideal, though they did what the owner required.

There was an article on a forum in which someone had purchased an electric fence reel for this very purpose. On the face of it, it seemed just about perfect, my only reservations being the all plastic construction of the item shown. Sure, it’s great for corrosion resistance, though I felt what with aging over time, and being under stress, it would eventually fail. However, the idea was still pretty sound, so I did a little more research and came up with a similar reel, albeit constructed a little heavier. 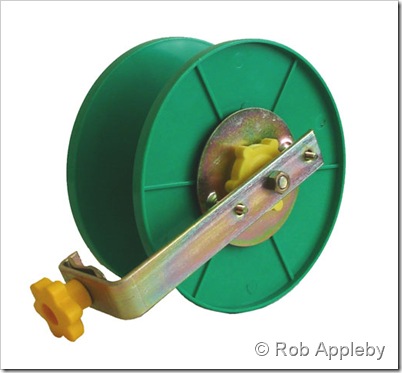 The spool is plastic and 8” in diameter and holds almost 300m of 2mm cord, suitable for all situations I intend to put myself in. There’s a locking brakes on the side, chunky enough to use with gloves and the reel locks solid. The bracket is steel, though plated to resist against corrosion. I stripped the reel and coated all the spindle and associated parts in a copper grease to give some lubrication whilst preventing corrosion in the long term.

One area of concern was the spool itself, or to be more precise, the lack of a line guide of some description. I felt that with the reel in the water, there was potential for line to spool off over the side and that would be far from ideal.

I visited the local supermarket and purchased a cheap stainless steel potato masher. After drilling out a couple of spot welds, removing the mashing head and then welding on a stainless ring from the local chandlers… I had a line guide. This was bolted onto the reel using the existing fittings. 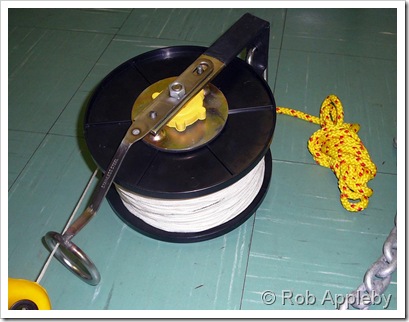 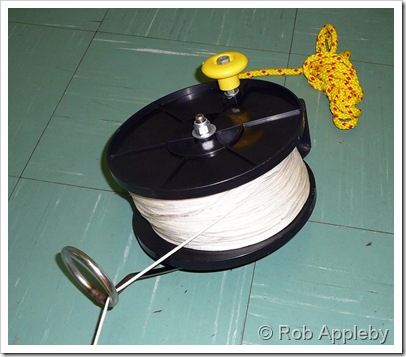 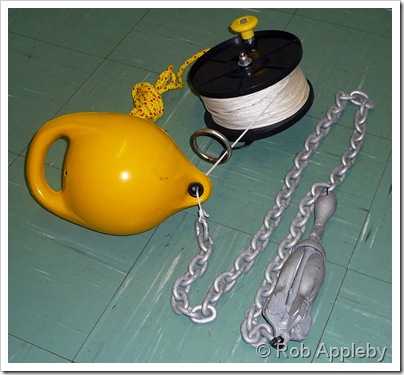 I added some padding to the bracket in the form of a few layers of string, over the top of that I added some heavy duty heat shrink tubing. This had the result of producing a reasonably comfortable handgrip. Time will tell how this fares.

To the hand grip I added 4m of floating rope (removing the existing knurled knob left a perfect attachment point). This can be threaded through the ring on the anchor trolley and tied with a slip knot to the kayak lifting handle adjacent to the seat. A quick pull and the kayak is released from the anchor, leaving the whole setup in the water, though supported by the buoy to allow easy recovery to the anchor as required.

Adding up the coast of the reel, warp, rope, anchor, buoy, etc, the whole setup cost around £40, which I consider pretty good value!. Ok, it’s something that’s rarely going to be used, though it’s there ready to go should the need arise.

Hi,
What's the strength of your 2mm anchor line?
Kinda scary if you got your anchor stuck on the seabed....

That's one big sinker to loose...lol

Hi,
the 2mm anchor warp will have a breaking strain of 100 kilo or more. On the anchor itself there's a small nylon weak link which when broken (a good hard pull) causes the anchor to invert... hopefully getting you out of trouble!

All that said, my first choice would be to tie off to a buoy of some description if one was available.

Hi with the smaller reel was it not difficult to wind the anchor and line in? Tried my the other week end and it was a nightmare. Perhaps i need a big handle?????-Cheers Karl in NZ

I've not had any issues with using a small reel, sure, you're turning it fairly fast when retrieving line.

How do you haul your line in?.

I pull my line hand over hand and dump it overboard on the other side of the kayak with each handful. I end up with a huge loop on line running behind the yak in the tide.

When I'm about to lift the anchor off the bottom I jam the anchor line between my foot and rudder pedal/footstop and reel in the majority of the loose line that's trailing behind the kayak. There's no weight on the line so it's nice and easy.

The reason I do this is that when you break anchor and start to drift, all the line that's loose in the water tends to sink and may become tangled. Once I have that loose line back on the reel I raise anchor onto the yak, then reel in the remaining loose line.

snap. thats how i retrieve my line and anchor.
great way of doing it. ive never had and problems using this method.

Ok, I'm disabled with one arm only. So, winding in line is a great pain in the butt. however though. am wondering if anyone has one of these & whether it's possible to take out the centre bolt/spindle in the winder then replace with another longer bolt & spacer to allow fixing to kayak on a permanent basis? any thoughts would be great. Tony

It's a pity you don't have a donate button! I'd
definitely donate to this fantastic blog! I suppose for now i'll settle for book-marking and adding your RSS feed to my Google account.
I look forward to new updates and will talk about
this blog with my Facebook group. Chat soon!