Well after yesterdays bonanza, I met up with Jim and headed off to fish a new mark east of Watchet in the Bristol Channel. Unlike the glorious weather of yesterday, today was very overcast, though the wind was light and the fishing conditions were as good as you could hope for. 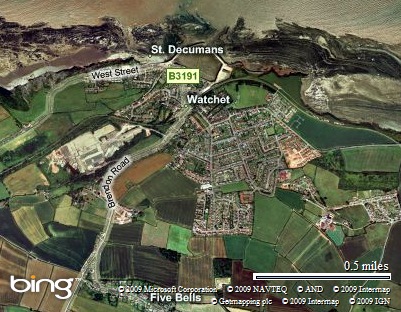 We dropped anchor a couple of hours before high water, the tide was still running, though not particularly strong. I fished two rods, both with pennel rigs on a running ledger, 6/0 hooks to 80lb mono. One baited with double squid, the other with a full side of mackerel.

Unlike yesterday where the flood failed to produce, I only had to wait five minutes today before the rod tip bent over, a decent thornback ray being the result. 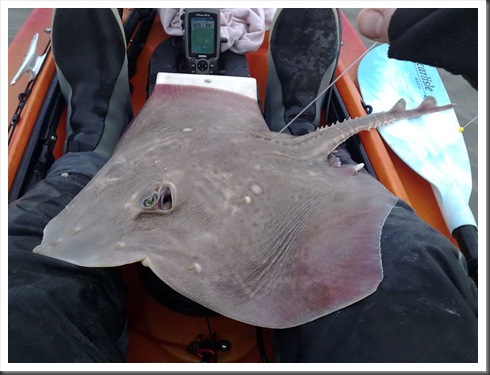 It was then only a matter of minutes before the conger eel started to make an appearance. I found I’d finish re-baiting and cast, out only for the other rod to start nodding. By high water I’d had five conger to about 20lb and two rays to 8lb 2oz (those I’m happy to weigh!) 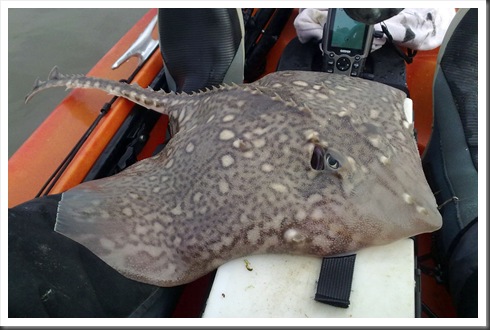 Now normally I’d expect slack water to be absolutely dead, however, the fish just kept coming. For a short period of time I was fishing a wind over tide situation which resulted in the baits being below the yak, not a way I like to fish unless the water is deep.

The mackerel rod produced a couple of firm taps so I tightened up, striking into the next firm pull. The rod went heavy and the fish took line steadily, there was little I could do. Several times it came 3-4m off the bottom only to plunge down again. Eventually it came under the yak, and I saw my first glimpse, it was huge!. I’ve never seen a head so large, a real brute. It was only just lip hooked, hanging on by a thread. I didn’t know what to do, though I wanted a decent photo so I gloved up and tried to bring it out from under the yak (the 6lb outfit didn’t offer and assistance!). Just when I thought I had a chance of getting it out for a decent photo it made a plunge. I couldn’t let go quickly enough and the hook pulled free…. GUTTED!, obscenities filled the air!

The fishing never stopped, again I was fishing two rods, though despite keeping them spread and fishing the baits at different distances, I still managed a couple of bad tangles. Large conger being the culprit on both occasions. Braid was cut as the eels had wrapped themselves up good and proper Despite the loss of tackle it was the only way to release the fish quickly, unharmed. The photo below is actually one of the 'smaller' fish, a decent double all the same. 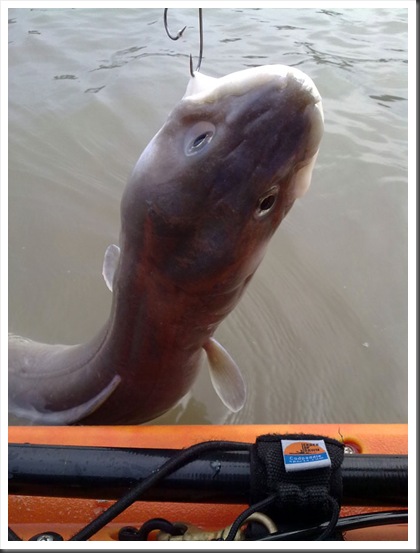 As the sun set the weather started to deteriorate, though it was still fishable, and we were still catching. The wind lifted to 15knots, gusting 20knots from the south west and the swell grew considerably.. oh, and it started to rain steadily. Despite all of this, it was still great being out there.

I hooked into something decent, I was hoping it was another big eel. I could do absolutely nothing with it, it kept taking line and then just hung in the tide. The tide as this point was pulling hard on the ebb, around 3 knots. After 15 minutes of being unable to get any line back onto the reel I decided to unclip the anchor and get myself on top of the fish. This changed the game totally and I soon had to fish to the surface. It turned out to be a cracking thornback of 11lb which had clearly being ‘kiting’ in the tide to great effect. 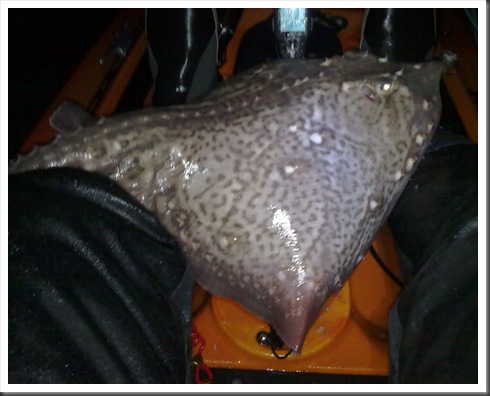 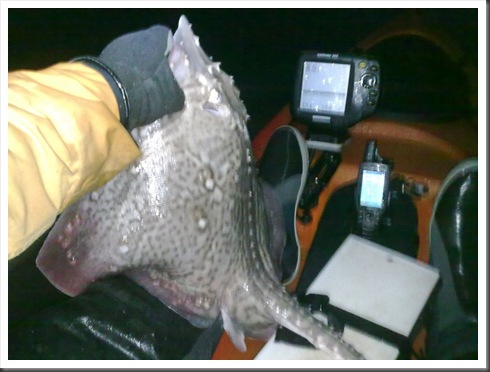 Apologies for the lousy photos, I’m still using the camera phone until I can retrieve mine from home this weekend, plus the sea state was getting rather heavy.

I’d drifted a few hundred yards during this time. It was dark, raining, and the swell was as bad as anything I’ve yet paddled in. I headed back towards Jim and made for my anchor point using the GPS. At one stage I was thrown of balance by a large wave coming up behind the yak at a 45 degree angle to the stern. A bit un-nerving, though I stayed on just fine.

I just couldn’t find the yellow anchor buoy. The heavy rain being swept by the wind made my powerful headlamp rather ineffective. After 5-10 minutes of looking I’d resigned myself to the fact the tide must have pulled the whole lot under. At the point of giving up I spotted it so I made a bee line for it. Retrieving it in the heavy swell and tide was a bit tricky, it really didn’t help when it wrapped around the rudder!!. Not wanting to hang about I left the loop around the rudder, dragged the rest on board and paddled towards the launch point.

Bar a few waves coming over the side, the front hatch going under water on a few occasions, the return was uneventful!

So what was the final tally?. About a dozen conger, a couple around 20lb and the biggie that I reckon was around 40lb. Five thornback ray ranging between 5-11lb. In total I reckon I must of had around 150lb of fish in a four hour session, no complaints!

That's some serious fishing Rob, what a result. Can't tell you how envious I am in land-locked Derbyshire!!!

Isn't there a canal that'll get you to the sea? :)

I really enjoy reading your blog!

"I think I'll stick to sunshine, calm winds and flat seas here in Florida!"... YEAH YEAH, I hear you! :)

Got to be honest, I'm hoping to get out to Florida next summer. I'm really wanting to try and catch a tarpon and snook from a yak, as well as anything else that fancies my bait!