It was hard work…

I was sat at work yesterday morning spending far to long checking and re-checking the weather forecast. The winds for that day were predicted to be 4-5mph, so why were they sat steady at 13-14mph!. I was flicking from website to website, checking buoy date, live weather stations and it was all doom and gloom. ENE wind, force 4 with white caps in the Bristol Channel, it was disappointing.

Around 3pm I phoned my local tackle shop at Watchet on the Bristol Channel and asked him how the sea was looking. The answer was ‘flat as a mill pond… been like that all day’. I couldn’t believe it, within five minutes I’d left work and was cycling back to my pre-packed car. After grabbing some frozen squid from the freezer I was soon on the A303 heading in the direction of Watchet. I made it to the shop in the nick of time where Steve had my lugworm wrapped and ready to go, top service!. I have to say, his fresh bait really is top notch, I’ve not seen blow lug of that quality since I used to dig it myself as a lad. 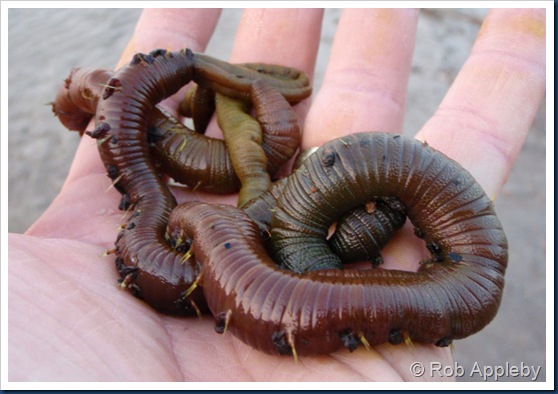 Once at the Blue Anchor I was soon rigged up. The tide was a long way out again which meant that an early launch would require crossing the reef once again. As much as my BucketBoy trolley was up for the task, I wasn’t. I chose the steaming cup of coffee with a few Oreo cookies option instead.. whilst watching the sun go down of course. 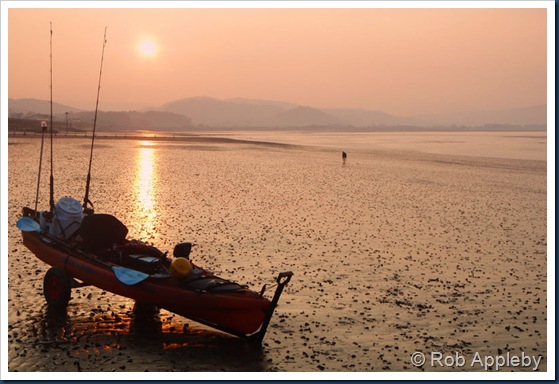 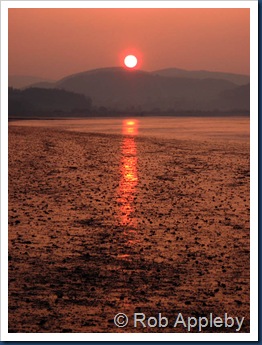 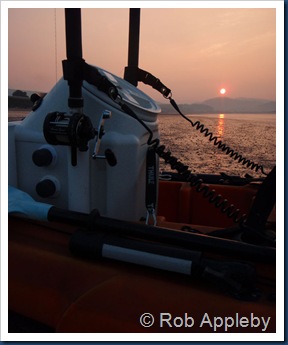 The tide was taking a little longer to flood over the mudflats than I’d hoped, still, there are worse ways to spend an evening. Armed with my camera and time to burn I messed about a bit whilst waiting for the tide. 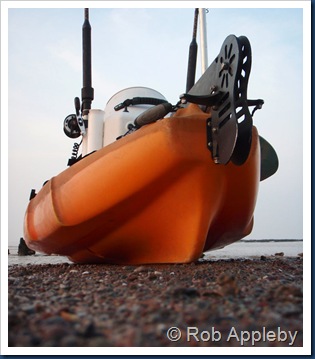 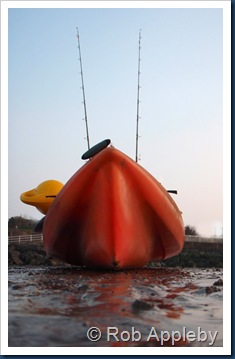 It was well after 6pm before I finally launched into the Bristol Channel and I headed out into deeper water before turning east towards Watchet. The tide was already running hard and it took no effort to hold 5mph as I covered the two miles to my chosen mark.

There was quite a bit of mist though visibility was still about a mile. I did find myself wondering whether or not there’d be a repeat of the fog from the evening before. I was really hoping that there wouldn’t be, though it wasn’t going to change my fishing plans either way.

A charter boat was anchored about 300m from where I finally settled at anchor. It was a little surprising as I normally have the area to myself on a weekday. No big deal, though the amount of noise coming from the boat was a little disappointing. That amount of noise does travel some distance underwater and I couldn’t help but feel it was not going to help the fishing.

The first baits went down about 7pm, double squid on a 6/0 pennel rig, tipped off with lugworm. I keep my trace at around 3-4’ of 70/80lb nylon. I use the heavy nylon as conger eel are a regular catch in this area. I tend to crimp these traces as the heavy mono creates a large knot that can making threading bait onto the trace quite awkward, especially with worms.

I only had to wait about three minutes for the first catch of the day, a plump codling of about 3lb. Then it went quiet, very quiet. The laughter and shouting from the charter boat just kept on increasing and I was totally convinced that it wasn’t helping matters. I was getting a few bites, though they were incredibly gentle, barely noticeable at times. I’d occasionally hook into one and a small codling was always the result. A couple of these fish were deep hooked so I was forced to keep them.

As slack water approached I started to pick up a few conger eels, though again these were all small at around 5-8lb. I managed 5-6 over the slack water period, though it’ll be nice to see the larger eels appear as the year progresses. There were also a few thornback rays, again they were small at around 5-6lb, though some were even smaller ! 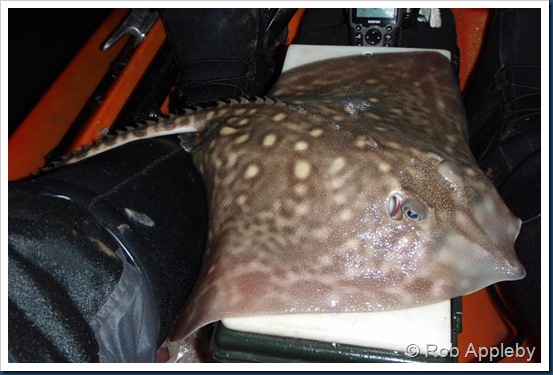 The dogfish came onto the feed as the flood tide slackened off, perhaps an hour before high water. They were relentless, no sooner than you’d unhooked one and lowered a fresh bait down, the tip would start to rattle once more. I regularly had both rods rattling away at the same time. They varied in size from tiny to large, though they all has the same goal in life.. to destroy my baits within seconds of hitting the channel floor. 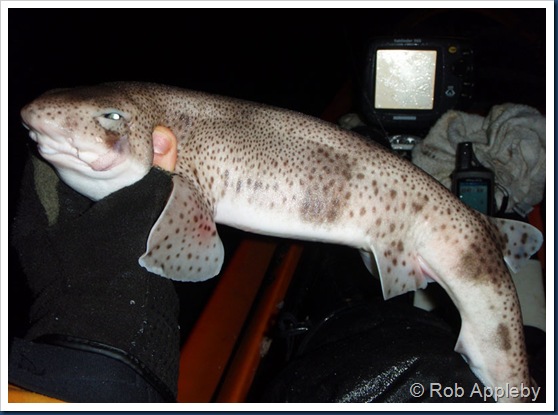 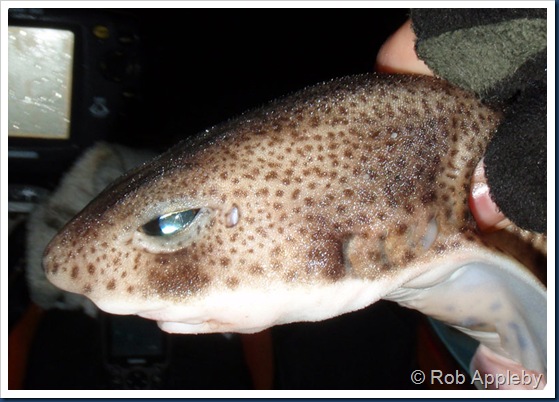 How many did I take?, well it was probably a couple of dozen within 90 minutes and my bait supply was all but decimated. I’d given up on loading up with fresh bait, I was either leaving on what I could salvage or picking scraps out of the foot wells and using them.

I was hoping that as the tide turned onto the ebb the dogfish would go off the feed.. I was wrong. The tide was running hard about 90 minutes after high water. Despite the mill pond conditions it sounded like a river behind me as the the flow was disrupted by the anchor buoy and the kayak itself. 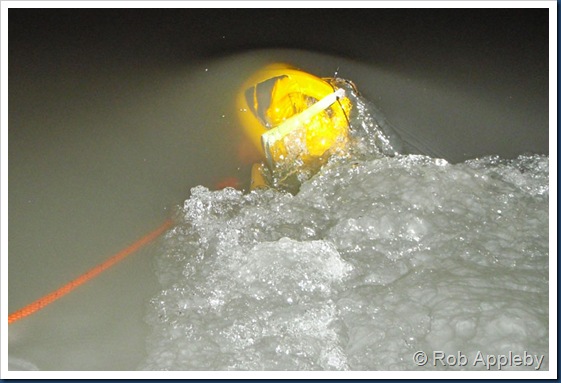 Note that I have a Cyalume fitted to the anchor buoy. Should I disconnect at night for any reason it makes relocating the buoy so much easier. Even with a GPS and a decent headlamp locating your anchor buoy at night, especially in a choppy sea, can be quite difficult.

With the tide running hard I reloaded my hooks with the remainder of my squid and fresh lugworm. Within minutes it’d been destroyed by the dogfish and that left me clean out of bait. It was pushing towards midnight anyway so I was quite happy to call it a day. You have to be rather cautious recovering the anchor in an ebb tide here as it really does race through, especially on the spring tides. With the anchor recovered I sat on the kayak having a general tidy up,stowing equipment and de-rigging rods as required. I may not have been paddling, though with the ebb tide in full flood I was being pushed along at a shade under 3mph. 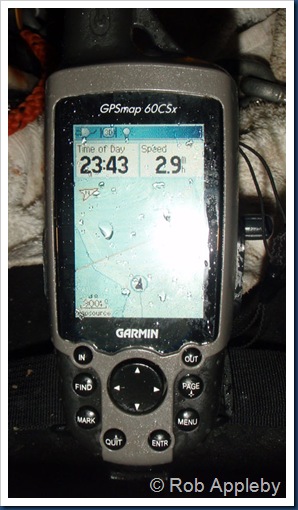 It’d been a cracking evening on the water with no wind, clear star filled skies and quite a few fish. There’d been a handful of meteors streaking across the night sky, though my wishes for a 30lb cod fell on deaf ears. I landed back on the beach sometime after midnight and took the opportunity to clean and fillet my catch. 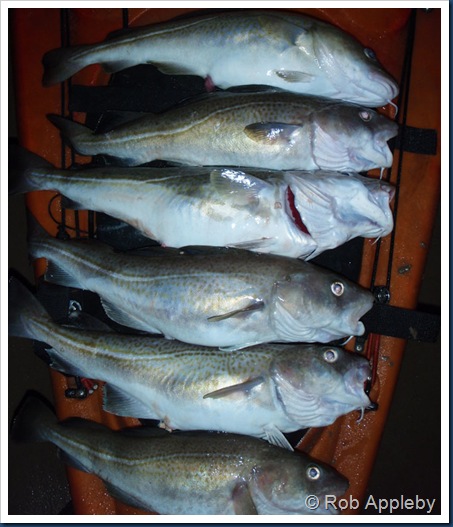 I emptied the freezer at work today and bought home 40lb of cod fillets and steaks. Needless to say my wife (fishing widow) was more than pleased. It’s not often that my wife gives kayak fishing the thumbs up, though today was one of those rare occasions.

Gotta hand it to you Rob - you deserve everything get - which is plenty!! Great stuff again and report to go with it..... think you'll need to find a large potato field now for all the chips to go with that cod!!

Cheers mate, nothing like a bit of Omega oil to keep the family healthy :). Guess what we're having for dinner tonight?... you got it, pizza !

Nice one Rob.
Do you still use your grapnel anchor when it's ripping through like that? I've had trouble with mine on the last two trips here in Southend : -(

Hi Mick, good to hear from you !
I'm using the same grapnel setup. I use the 1.5kg anhor with a metre of chain. Anchor down onto the sea floor then an additonal 3-4 times in depth of anchor warp depending on the tide flow. In the Channel where I fish the HW depth is 15-16m and I generally let out a good 60m of extra warp once the anchor touches bottom, hence 75-80m of warp is deployed.