A couple of years ago I was having serious doubts as to the suitability of the C-Tug kayak trolley to do its duty of moving my Prowler Big Game kayak from car to launch site. In the space of a couple of months the trolley had tipped over on slight inclines, or even when bumping over a stone sticking out on a sandy beach. The results were cracked rod rings and one angry and embarrassed kayak angler. The greater width of the Big Game over other kayaks mean that the Big Game, or other similar sized kayaks, do not sit well on the C-Tug trolley. I’d given some thought to making a more suitable trolley, though to be honest I just couldn’t find the time to pursue my thoughts.

On the ‘Anglers Afloat’ forum one of the users, ‘Bucket Boy’, produced a truly excellent piece of design. His trolley was based on a dingy trailer, though lighter in build and collapsible. He also own a Big Game kayak and is fully aware of the limitations on the C-Tug trolley. I was extremely intrigued and decided to go ahead and make one for myself. There were a few minor changes/enhancements which I’d decided upon, though it essence it was a straight copy.

Below is a photograph of it fully assembled and ready to go. 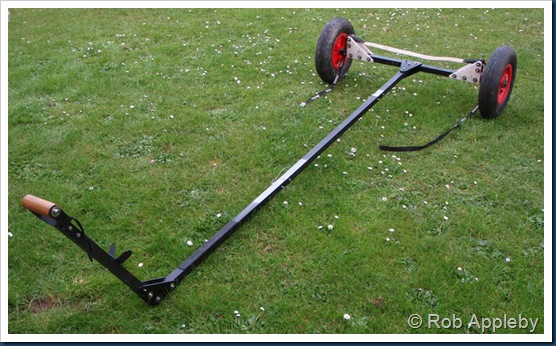 It breaks down into three main sections and two wheels, all of which fit into the front hatch of the Big Game kayak. You need a couple of trial runs to get the stowage correct, but basically the largest sections go in first and are pushed aft, the wheels go in last. Despite the tyres being considerably bigger than the C-Tug (4.8/4.00-8), they fit into the front hatch without a problem. 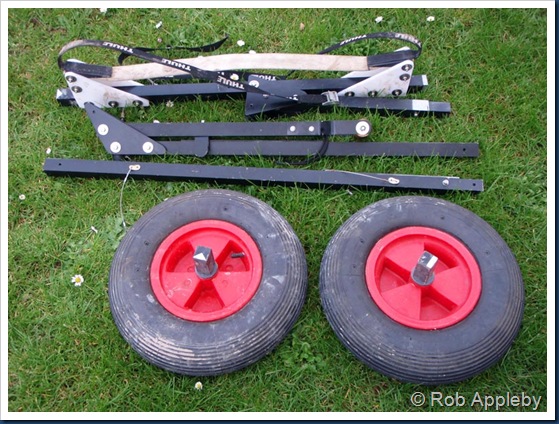 The rear axle section is basically the business end of the trolley and it’s here where the real manufacturing work takes place. 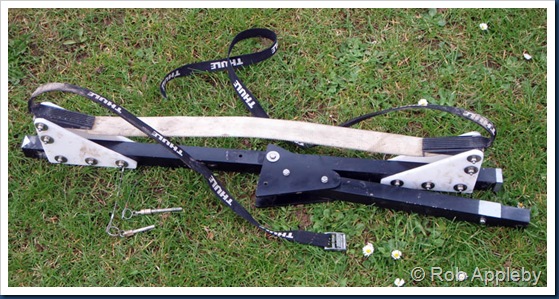 Triangular brackets are bolted to either end of the aluminium box section axle with hinged aluminium wedges to which a canvas support strap is secured. This strap is bolted to the underside of the wedges using countersunk screws. They not visible in the above photos due to a protective/gripping rubber strip being glued to the upper side of the wedges. A Thule strap was stitched and glued to the underside of the canvas strap. This is of a suitable length to allow it to pass around the kayak securing it firmly to the trolley. What’s amazing is that once strapped to the trolley, the kayak does not move at all, unlike the C-Tug.

Once required for use the hinged section is swung forward and locked in position using a ‘pip pin’. 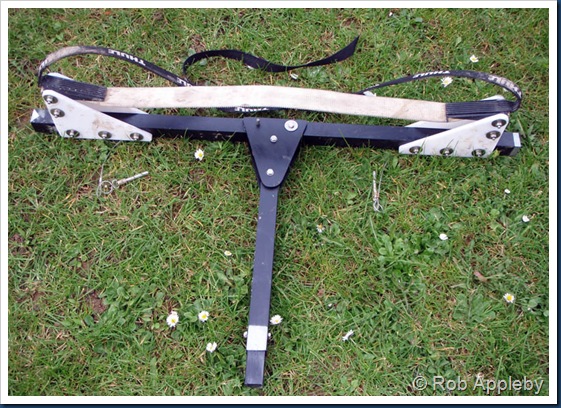 The bracket plates were made from machined aluminium, though heavy gauge plate would also do the job just fine. I used aluminium opposed to nylon board as an elongation of the holes would prevent the pip pins from operating correctly.

The centre section is plain aluminium box with a machined locating spigot at one end. This slides onto the rear trolley section and again is locked in position with the use of a pip pin. 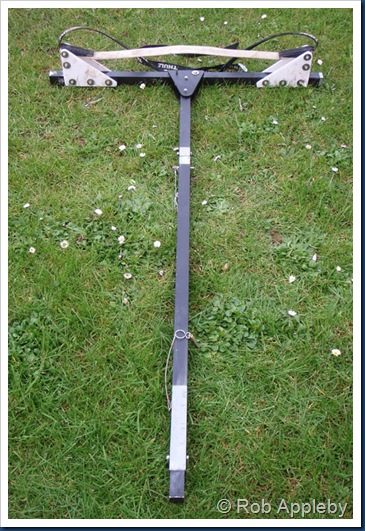 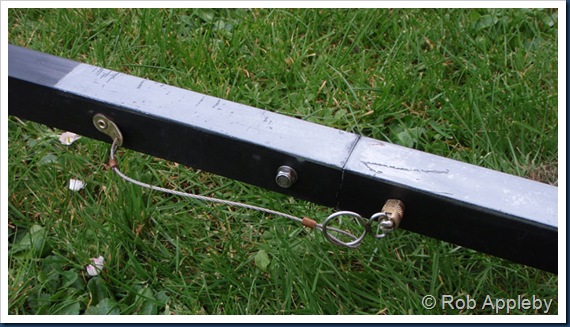 You can see various silver markings on the trolley, long and short painted sections, triangular marks, etc. These allow me to fit all sections correctly as all holes were drilled to suit during the manufacturing process.

The front handle section is also collapsible and is constructed from two sections of aluminium box, two brackets and a handle assembly. Again a pip pin allows the section to be extended and locked into position. 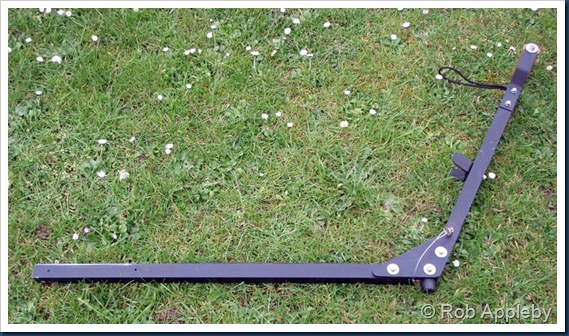 This final section is then attached to the trolley and locked in place… with a pip pin. 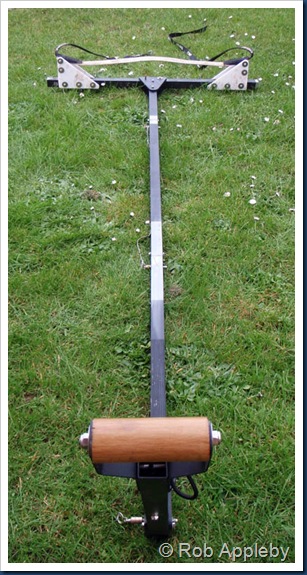 At any point during the assembly the wheels can be fitted. It’s perhaps better to fit them at an early stage, though it doesn’t make a huge difference to be honest. 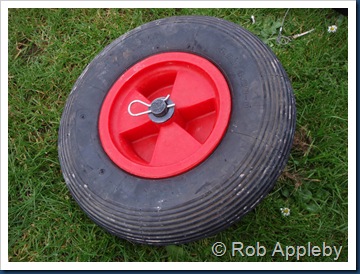 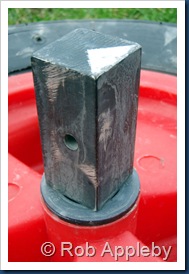 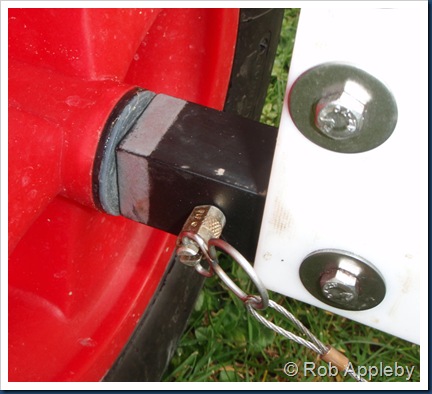 So with it all connected and secured with pip pins the trolley is fully assembled and ready to go. 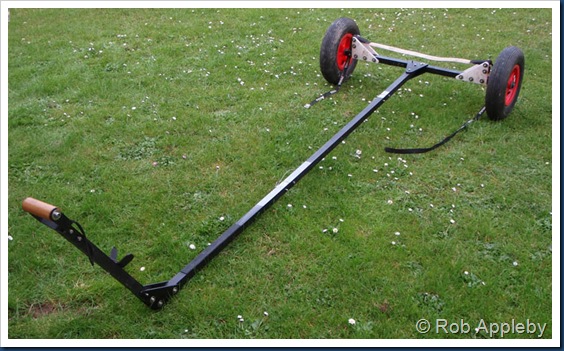 Loading the kayak takes seconds, it’s merely a case of lifting the kayak onto the rear axle followed by swinging the nose onto the trolley. There’s an angled bracket on the handle upright in which to locate the bow of the kayak. I fitted a rubber strips in various location to help keep the kayak correctly located at all times.

So what’s it like in use?. When it’s very well balanced with little weight on the handle when lifted. This can be fined tuned during the build process by ensuring the centre of gravity of the fully loaded kayak is positioned on the rear support strap. It’s a pleasure to pull the kayak along either smooth road, sandy beach or rough ground. What I really love is that you can happily traverse very uneven surfaces and steep side slopes without being concerned about the security/safety of your kayak.

The oversize wheels allow it to be taken across terrain that would see other trolleys faltering. Is it a pain to assemble/disassemble and to stow in the kayak?. It takes approximately 1 minute to strip into its component parts and another minute or so to stow within the front hatch of the kayak. It is bulkier than the C-tug when disassembled, though its advantages far outweigh this one disadvantage. 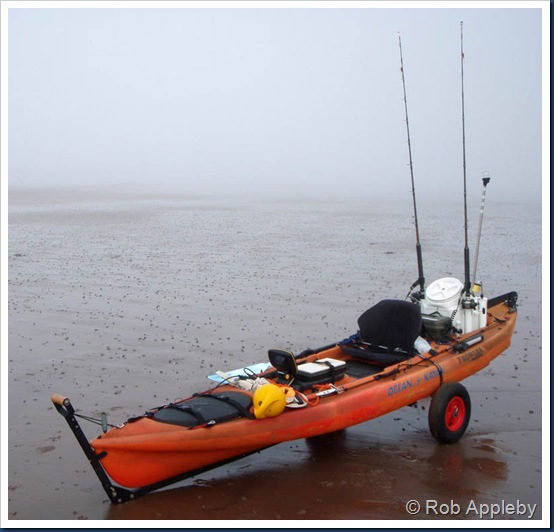 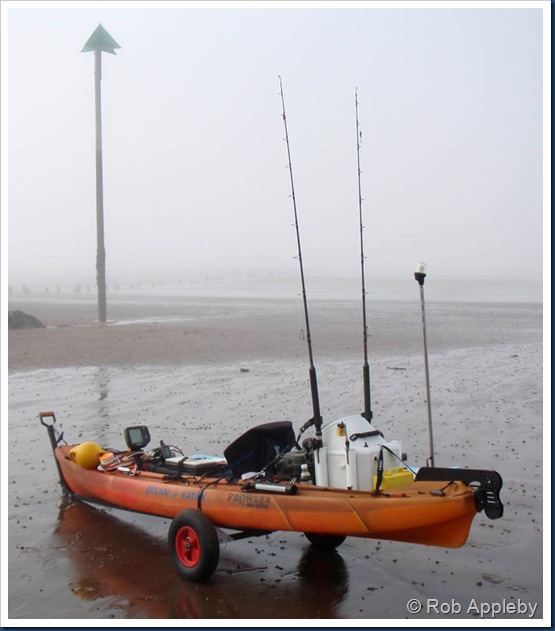 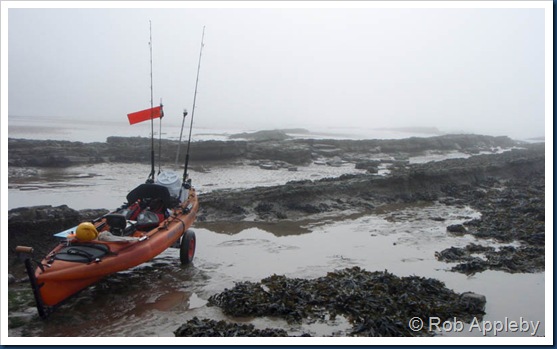 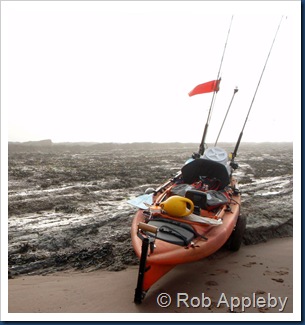 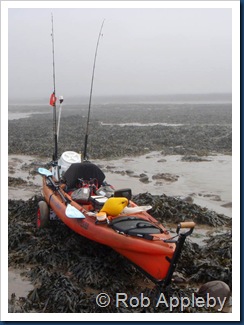 I do still use the C-Tug for short distances and on surfaces that are hard and flat, it’s just convenient. It is smaller and lighter and doe have its uses. However, should the trolley journey be long or arduous there’s only one trolley that I’d trust to undertake the task…

You must be working in a metal shop or you are a DIY genius! I know, the C-Tug is a nice cart but can also cause some headache, especially on rougher terrain.
The "Bucket Boy Cart" should be produced in series!
As what I can see, it shouldn't even be any problem to attach wheels with balloon tires for those people, pulling the cart over dunes and in soft sand. Great post and thanks so much for sharing this.
Tight Lines
Rick

That is a fantastic trolley, but my god it looks a lot of work. Guess you don't have kids eh?!

Haha. I have two kids, a son and a daughter, 3 and 7 years old respectively. The aluminium spigots and plates were made at work. Putting them to one side, the trolley took 3-4 hours to build from scratch.

With suitable materials, a grinder, files, hacksaw, drill ,etc, the trolley could easily be manufactured within a working day.. perhaps an extra hour or two if the kids invade the workshop :)

Technically quite nice, but is the extra length and added complexity of the entire front-section and under-hull 'bar' really of any benefit?

Wouldn't just the wheel-section (just like a normal trolley) be sufficient? The yak has a grab-handle on the front, so I'm not sure why you'd need the rest...

That's an interesting comment. As it stands the trolley is totally stand alone from the kayak. With wheels/axle only, once strapped on it becomes part of the kayak.

What does this mean?. For example, my experience with the C-Tug is that it'll slip and twist when going over rough terrain, worst case scenario it'll result in the kayak tipping over. If it had been mounted through the scupper holes, the weight of the Big Game allied with traversing rouh ground is likely to put a lot of stress on the scupper holes, not a good thing.

How heavy is my fully loaded big game?, 40-50kg?. Using the front toggle, which is attached with a piece of cord to two small threaded inserts, puts a lot of stress onto that part of the kayak. Perhaps the toggle will break off, perhaps the inserts could pull out.

If you look at some recent reports you'll see that I've dragged this trolley over some very rough ground in order to launch the kayak. There's no way I'd have attempted it with a C-Tug, or with a 'wheels only' trolley strapped to the kayak. The likelihood of the trolley slipping or the toggle assembly failing would have been far higher.

With a far lighter kayak you may get away with a different, more simplified design, though this design certainly suits the Big Game. I've used the C-Tug for a few years and this trolley for a few months. The trolley design has proved itself as bring very effective and well suited to the abuse it regularly receives.

So to summarise, the design means that the trolley cannot possibly slip. There is zero stress on the scupper holes and front toggle assembly. When traversing difficult terrain that requires much dragging/pulling, it is the trolley that it actually being manoeuvred over this terrain. It's the trolley that it taking all the stresses. The kayak is just along for the ride.

hi rob,
what did you use for the axle inserts?

The 'wheel end' was turned down on a lathe to get the cylinder for the wheel to slide onto. The other end was made square to insert into the square box section of the axle itself. Perhaps a bit over-engineered, though I had the facilities at work so it was easy enough to do.

What size bolts did you use for this build?
Size and length would be great to know.

I just finished my self-made rudder, thanks to your routing on the ropes that raise and lower it. This trolley is my next project.

The bolts were 6mm stainless, length to suit, though often cut to length as required. Washers were generally repair (penny) washers. The 'pip' pins were whatever I managed to get hold off to be honest, though I think that they're also 6mm items.

I used 8mm stainless threaded bar through the wooden handle, nyloc nuts were used throughout the build.

Great review I also have a ctug and also had problems with my 2 man fiberglass yak slipping off, and the folding stand hardly helps at all to keep the trolly upright usually it falls over trying to put the yak on top.
In the end I used sum old inner tubes cut to the size of the straps and threaded the straps threw it stops the yak slipping if you don't have inner tubes ask a cycle shop they allways have used ones you can have for free.