Big Ray from the Bristol Channel

The good weather seems to be hanging around, and long may it continue. I’d originally planned to fish locally, though after a bit of a chat with a yak fishing mate we packed the car and drove north west towards the Bristol Channel.

The weather forecast was for a light southerly breeze which is absolutely ideal for this northerly facing mark. Conditions were expected to be almost perfect and on arrival we weren’t disappointed. The water temperature is rising and the conger eel are starting to move back to shallower waters once more, which is great news for the kayak angler.

Armed with a bag of mackerel and a few squid, we rigged up with high hopes of thornback ray and conger eel. 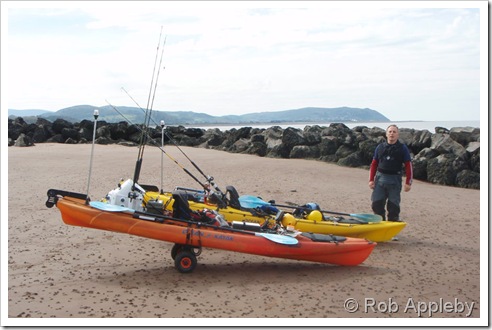 We were soon settled on the water and it was only a short wait before my mate was into the first fish of the day. 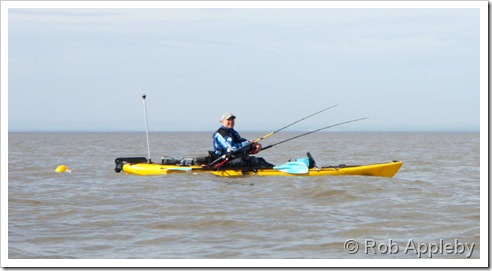 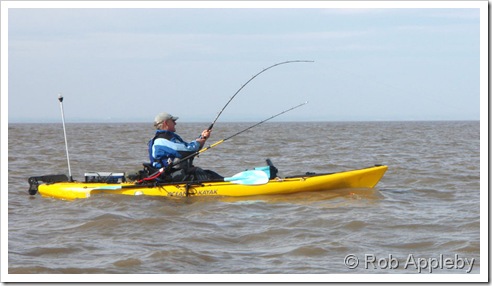 Unfortunately it dropped off as it broke the surface, it was a good fish, probably a conger. Unusually for this mark there were high numbers of dogfish which were happily impaling themselves on the half fillets of mackerel mounted onto our 6/0 pennel rigs. They are without doubt incredibly greedy fish!.

The light southerly breeze which was forecast do fall as the day progressed, took a change for the worse. The wind swung to the west and was blowing a steady 20mph at times. This caused a swell to build and white horses crested into the yak on an all to regular basis as a result.

This mark has never fished well for me with a rough sea and today was to proving no exception. The fishing all but died with only the odd bait thieving dogfish making an appearance.

However, there were soon cheers from my mates yak as he hooked into another conger eel. It was no monster, though they’re a powerful fish, this allied to a strong tide provides great sport on light tackle. 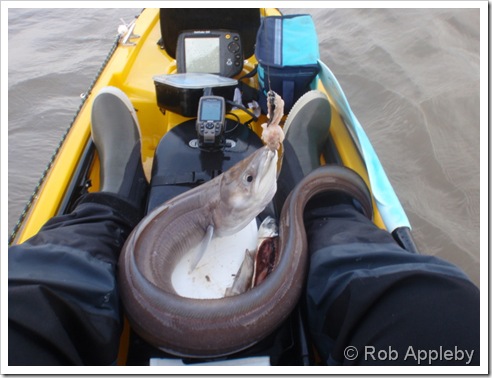 Now this was great news for my mate, his first conger eel from the kayak. It was also bad news for me as we had £5 riding on the best fish of the day. I was happily clearing the Bristol Channel of dogfish, though I’d yet to make contact with anything else.

I re-baited with fresh lashes of mackerel and down they went. On one rod I let the lead hit the bottom, then under control I let the bait run down tide away from the kayak. It’d only gone a few metres when the line started spooling hard out from under my thumb. I applied some drag and I was immediately rewarded with the weight of a good fish.

More line was being stripped from the reel and my 10-15lb boat rod was arching over nicely under the pressure. 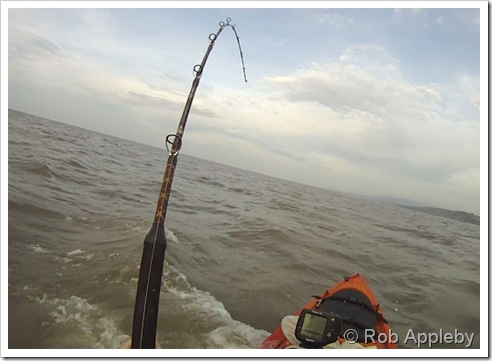 I slowly made some headway, though the fish made several hard dives back down to the sea floor and it was using the strong tide to its advantage. I was fairly certain that it was either a conger or a good sized cod. 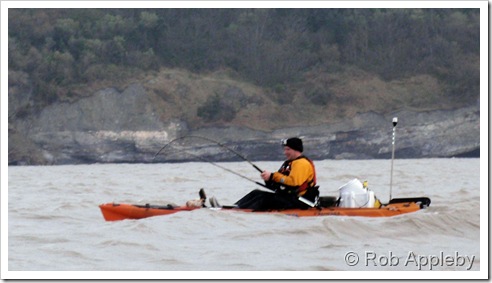 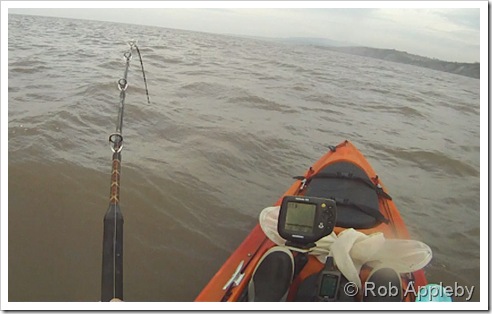 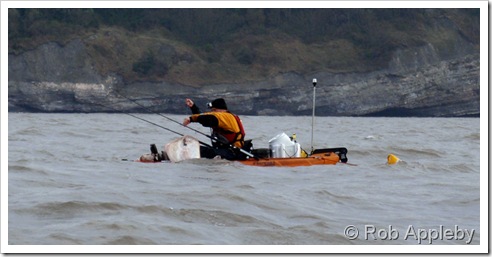 However, I was wrong on both counts as it turned out to be a very good sized thornback ray. When I saw it alongside the kayak my initial guess put it at 12-14lb, though on lifting in out of the water I realised that it was far heavier!.

A few large swells rolled through which made weighing it rather difficult, the scales were moving between 16-24lb as I rose and fell on the waves. There was a settled spell where I managed to achieve a steady weight, oscillating very slightly either side of 20lb. Needless to say, I was absolutely chuffed, by far my biggest thornback to date. 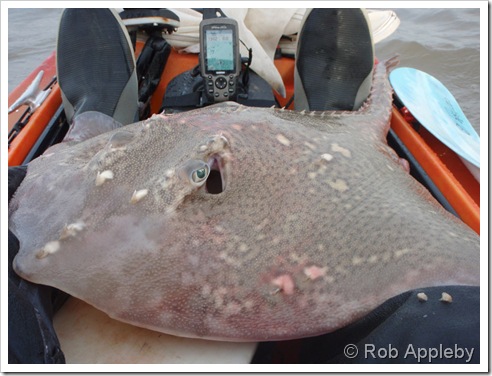 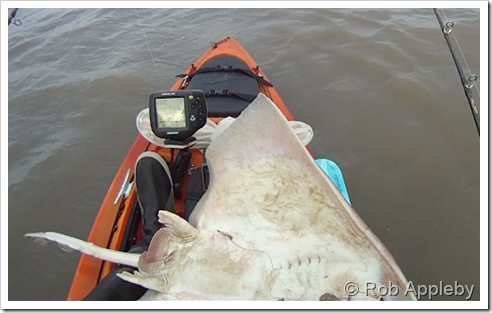 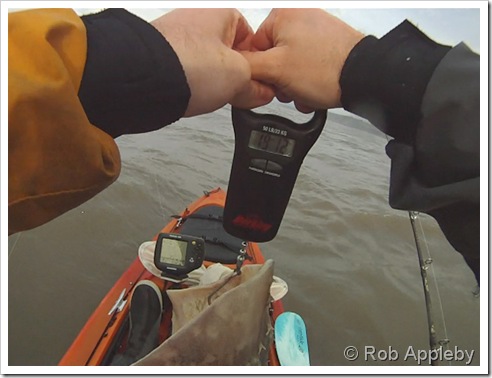 It was an incredibly thick fish, similar to a stingray in build. It was quickly photographed and returned to fight another day.

I took the opportunity to try out my new dry box/ livewell combo, though it was purely rigged for dry box duties. I have to say that it’s exceeded my expectations. It’s so easy to access, and the coarse threaded lid makes opening and closing the box a two second operation. Ok, it’s not as organised as the Yakmate, though I’ll place a couple of decent sized plastic containers inside, this should prove to be an good solution. 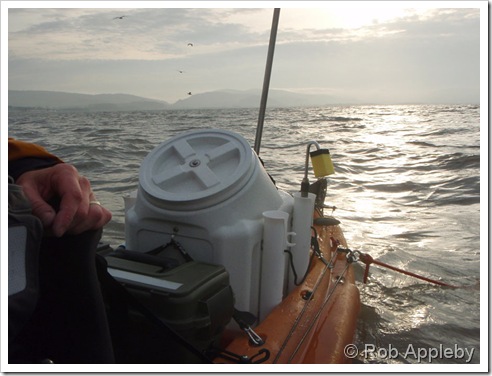 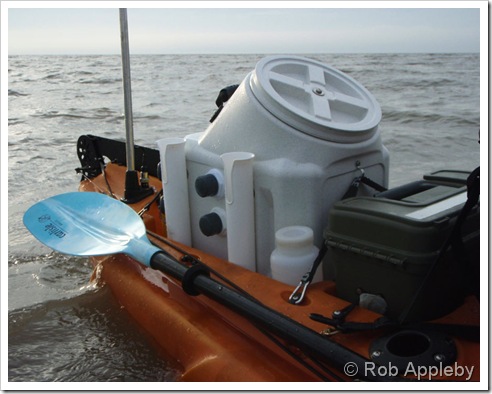 The wind eased quite suddenly, in fact it dropped to barely a whisper. Within thirty minutes the sea had flattened off and the evening was a very pleasant one. We sat there watching the fog build on the hills and roll down onto the sea, cracking stuff. 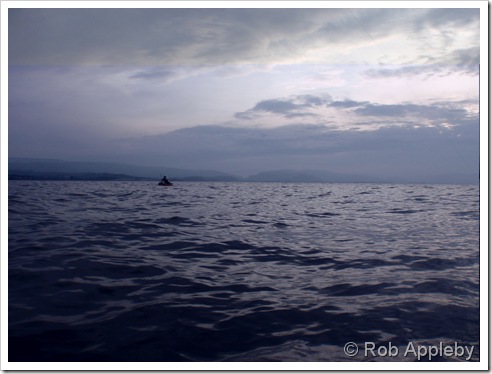 As dusk fell we paddled back with the tide, heading back to our launch area. Despite the couple hours of very poor weather mid-session, it turned out to be an enjoyable day on the water with a good few fish to show for it.

Here’s a video from the day shot with my GoPro HD. I had the head cam pointed up a little too high, though it’s still reasonable. The quality and size has being massively reduced on You Tube, though I’m also experimenting with Vimeo which allows videos of a larger size and quality to be uploaded.

Earlier in the post I mentioned that I found my new dry box somewhat disorganised compared to my Yakmate. I decided to tackle this issue sooner rather than later and I produced three pieces of slotted wood. These can be slid inside the box and assembled within seconds providing 6 good sized compartments. 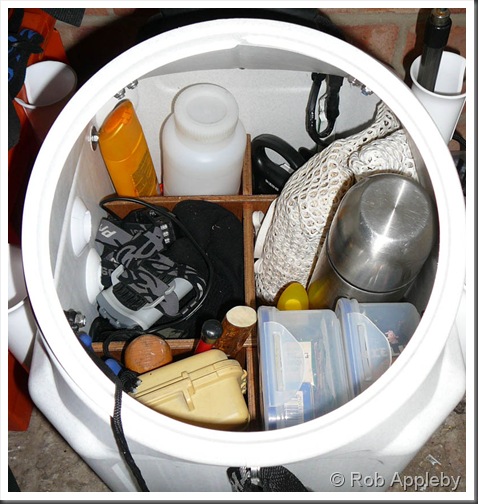 One effectively houses and protects the pump, the others allow a good level of organisation. They can be removed in seconds should the container be required as a livewell. Where’s all the gear going to go then?, well, there’s my marine box behind the seat and the centre hatch stowage. It seems like a good solution to the problem, I just hate having to rummage around for gear.

Way to go Rob, that's the sort of fish to make it all worthwhile! Is that your biggest so far?
Paul

Hi Paul, it's my biggest Thornback to date. I heard off a Bristol Channel fisherman that it's 6lb short of the Channel record. Well pleased, I doubt I be beating that any time soon !

Nice one Rob, looks like you had a good day and many more to come with the better weather mate.

Cheers for the comments fellas !