Camping and fishing at Ringstead Bay

I know, I keep harping on about how incredibly poor the weather has been for these past couple of months, and for good reason. Myself and a couple of friends has considered a going camping and fishing over the Easter weekend only to find ourselves sat at home drinking wine whilst listening to the rain lashing against the windows. Ah, how we love the British weather!

No further plans were made, though the following Friday saw a somewhat unexpected break in the weather. Hasty plans were made in order to depart on Saturday evening, make camp in readiness to fish on the Sunday.

A couple of frantic phone calls soon highlighted the fact that fresh bait was in rather short supply. One shop came up trumps and the bait was ordered. Sadly, when I turned up to collect it the condition of the worms left rather a lot to be desired. Still, it only had to last 24 hours so it was wrapped in fresh paper and covered in cool blocks. First lesson learned, ensure all cool blocks are first placed inside a plastic bag, or vice versa with the bait.

I’d like to be in a position to say that the trip was organised with military precision, alas it was not. Though we eventually hit the road and made the ninety minute journey down towards Ringstead Bay.

We pitched our tents at Rosewell campsite, it’s located within Osmington Mills and was quiet and spacious. Note the rather unhappy tent pictured below! 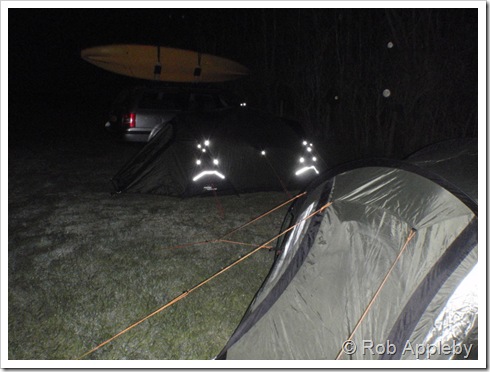 Camp was hastily made and we took a very short work to the local pub, the Smugglers Inn. Good food, good drink and good company, what more could you ask for ?. The view at night towards Portland Bill was cracking, though it had a close rival in the shape of the adjacent view of the pub. 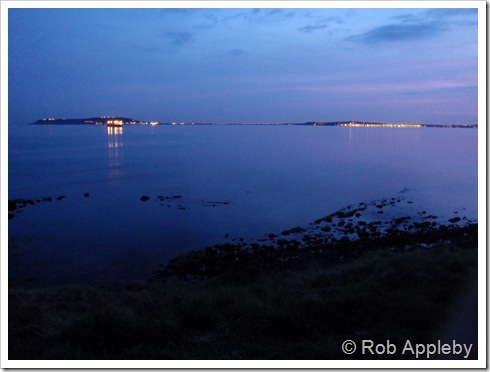 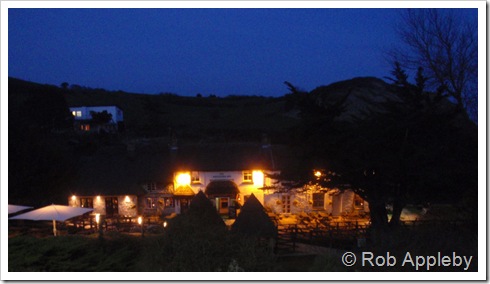 The trouble with enjoying a few drinks is that at some point later in the evening you’re going to feel the need to eat a horse. No horses were to be found so we settled on some sizzling bacon buns before getting our heads down. 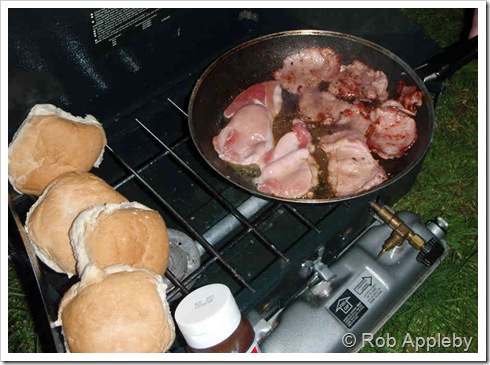 The following morning saw a rather leisurely start, though a couple more bacon buns and a cup of steaming tea saw us driving the short distance to the car park at Ringstead Bay. Parking here is about 100m from the beach (£5/day) and trolleying the kayak to the beach is no problem. However, the shingle is very loose so help may be required when recovering your yak/trolley back to the slipway.

I mentioned earlier about keeping the cool blocks in a plastic bag. I didn’t and the bait that was wrapped in newspaper was absolutely soaked and was all but dead, not good. 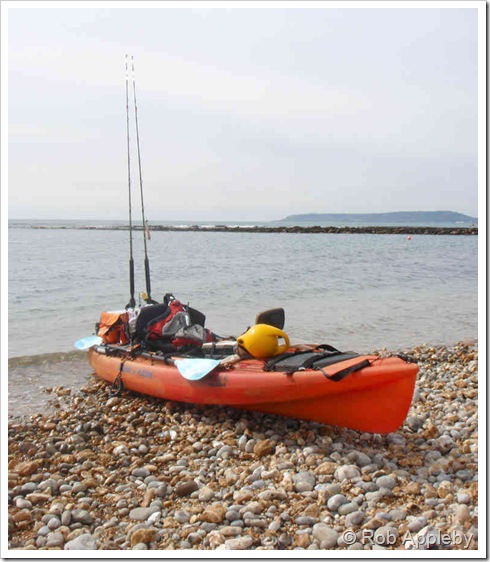 There was a bit of wind, ten gusting fifteen mph, nothing too exciting, though once into the bay there was a steady swell. We were soon out and into the bay trying a couple of different marks. We’d been hoping for some Plaice and perhaps an odd Thornback Ray or two. In reality the fishing proved to be painfully slow though I eventually managed three Dogfish. Nobody likes to catch Dogfish, though when there’s money in the pot for the best fish of the day they were welcomed aboard the kayak. 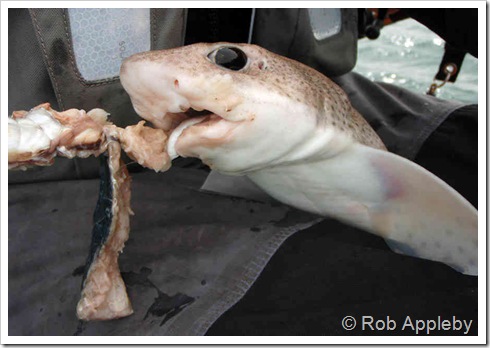 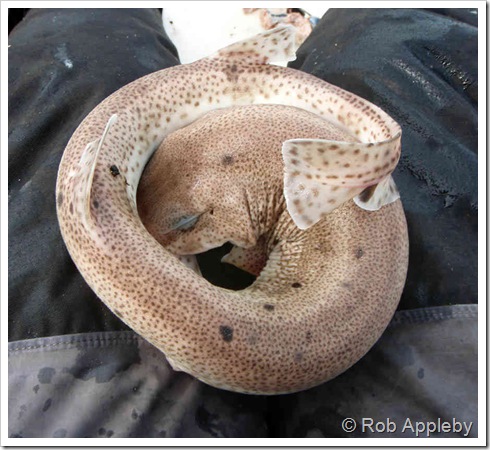 After a couple of hours on the water, especially with things being rather slow, we paddled ashore and another brew was soon on the go. 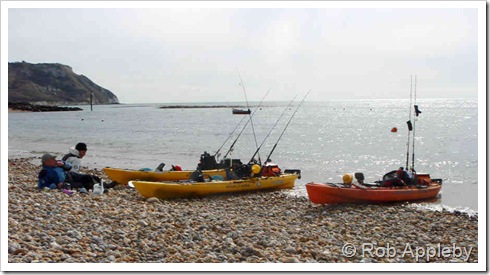 After a refreshing wet, and a large slice of Walnut cake for myself, we were soon paddling out again in the hope of some better fishing. There are some reefs very close to the shore here, at high water there’s a gulley about 20m wide between the beach and the reef. I’m sure that if fishing from the beach at night with a fresh lash of mackerel you’d be in with a good chance of a nice bass.

I paddled out over the shallow reef which was strewn with kelp, occasionally bumping the rudder over rocks as I progressed, it really is a picturesque location. 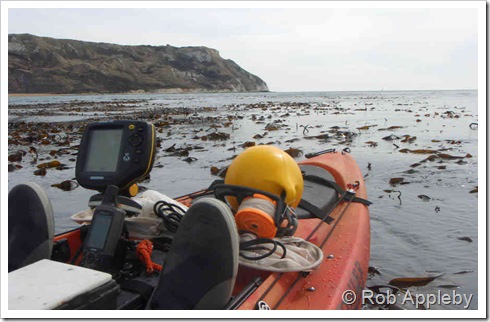 We paddled off towards the headland where I initially tried some deeper water, though I soon moved in and fished as close to the weed covered rocky floor as I dared. Sadly the fishing was basically rubbish. Perhaps it’s still a bit too early in the season. 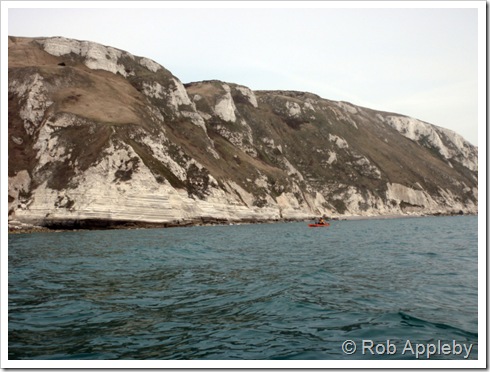 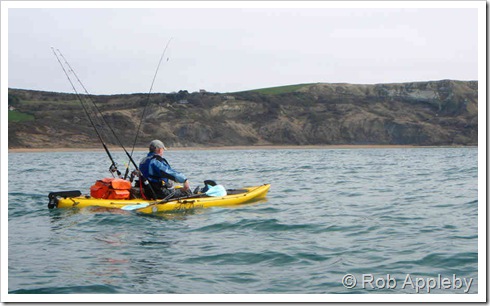 Despite our best efforts the best we could manage was four measly dogfish between us, though it’s always better than a blank.When paddling back in the rising tide had covered the reef resulting in a few nice waves. I took the opportunity to ride a few waves, just keeping in practice for when I need it most!. There was a chap playing on the surf in a plain Prowler 13 kayak, he must of thought I was mad joining him in my fully rigged Big Game.. perhaps I was, but it was fun.

So after a pleasant day on the water I caught the last of the swell and came ashore. 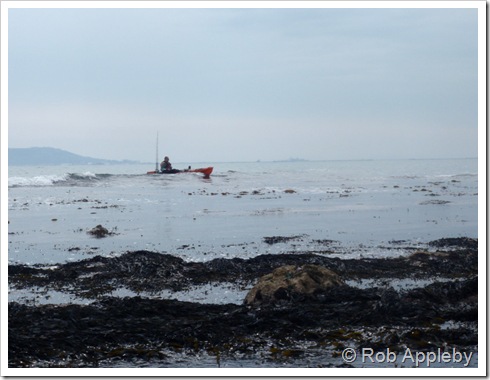 We paddled five miles around the bay in the search of fish, even a bit of drift fishing over the weed beds in the latter part of the day. Despite the lack of fish I’ve no complaints, it was a cracking night away with some good company and a pleasant venue at which to wet a line.

The beach, which is mostly shingled but with some patches of sand, stretches around the bay in both directions. The formation is really amazing.

Surely, a beach can be the best place to spend a vacation in a caravan with your family.