Last year's big road trip had been hugely successful and I'd planned a similar trip for this summer. This year I was to show Ronald Traas( aka 'The Dutchie') some of my favourite marks and to hopefully land some big fish onto our kayaks.

Sadly this year wasn't to be a repeat of last year. I do have huge reservations about booking such fishing expeditions so far in advance, as whether you like it or not, you're at the mercy of the weather. As a saltwater kayak fisherman I'm all to aware just how much a trip can be dependent upon the weather, something that's often far less of a concern to the majority of freshwater kayak fisherman.

In the week running up to the trip it wasn't looking too hopeful, but we all know how unpredictable the weather can be and that forecasts are changeable at best!. Sadly this wasn't to be the case and the wind to cause havoc with the planned fishing. Virtually all of my chosen marks were made unfishable, or quite unpleasant for the whole trip. We found ourselves having to fish marks that I had little or no experience on, something that also affects one's confidence when fishing.

We traveled to Cornwall first, purely as no other of my chosen locations were fishable at that time. With the wind averaging 20mph or more the first fishing trip saw us head up into the tidal waterways in the hunt of Gilthead Bream. During my previous trip I'd been warned that the numbers had declined sharply due to commercial netting, though I still caught several fish. What did concern me though was the effect that the stiff westerly wind could have on the fishing.

Fishing was my usual setup for Giltheads, a light running ledger, 1oz with a 3' 20lb flurocarbon trace. The hook is all important here, with a strong sharp hook being a must with the 1-1/0 Sakuma Chinu being a favourite of mine. What there are at this venue is plenty of 'school bass' and as much as they're fun they get to a fresh bait intended for something else all too quickly!

I lost count of how many of these fish were caught and returned, but they weren't the target fish and the Giltheads had yet to make a show. I knew from previous experience that I'd enjoyed my best sessions from the mid-flood tide and that time had yet to arrive. 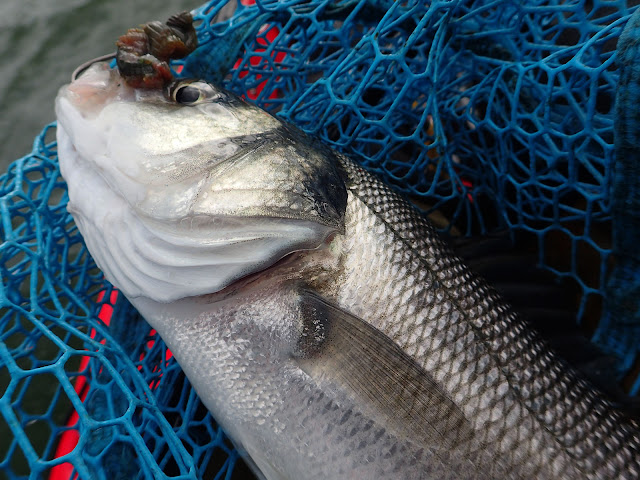 There's rarely mistaking a Gilthead Bream bite and when my rod tip pulled over hard and line was being ripped from the reel I was in no doubt as to what I'd hooked in to!. It was actually the best run I'd had off any Bream to date and it gave a great account of itself. The surprise was when it came to the net, it was considerably smaller than I'd expected. There's no doubt about it, they fight exceptionally well. Not the PB Gilthead Bream that it initially felt like! 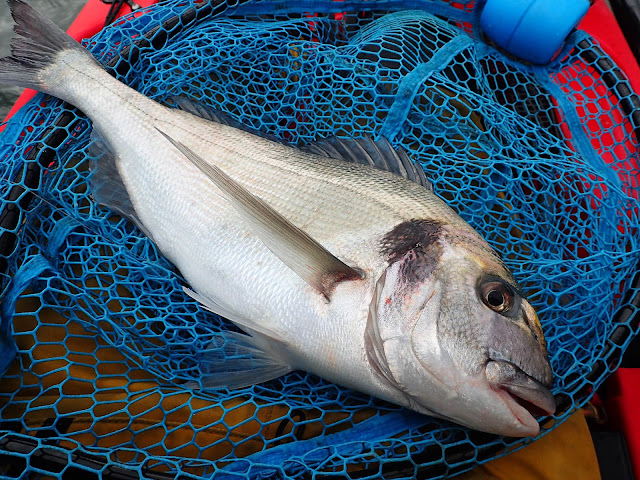 Though I can hardly complain, many people fish long and hard in the hope of catching a Gilthead, so I consider every one that comes aboard a special fish. Disappointingly it was to be the only fish to be caught, Whether that was down to netting, the weather or just bad luck on that particular day, who knows.

The weather continued to be against us and the chosen Pollack grounds were unfishable, I'd also wanted to fish Sennen Cove, but again the weather made that venue impossible. I decided to launch from Porthoustock in the hope of finding some mixed species. Again the fishing proved very tough with only a few small Pollack and Wrasse being caught.

The next day saw us launch from around the corner at Porthallow. The venue looked promising but again it was proving to be difficult. I resorted to drifting with baited feathers, allowing the wind to push me across the bay. After a couple of quiet drifts I found a few mixed species. Nothing exciting, though a pretty Ballan Wrasse was worthy of a photo. 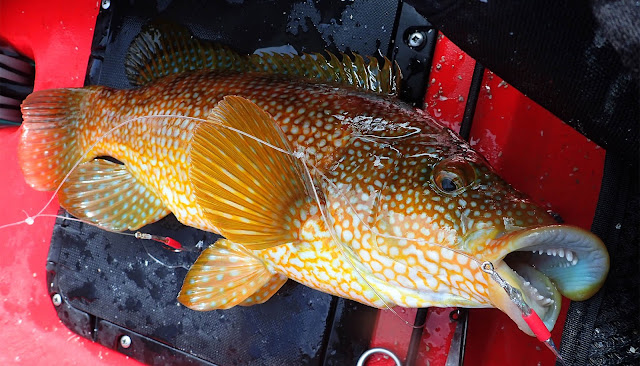 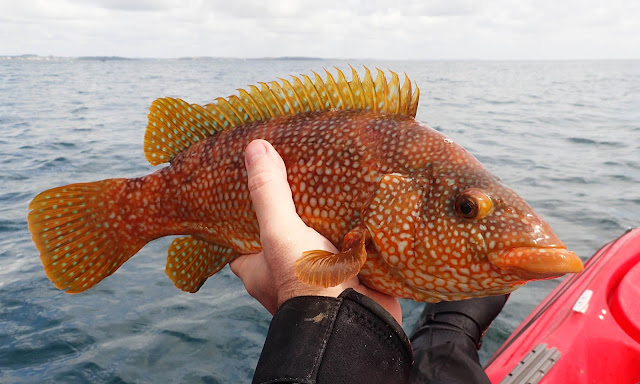 As much as it was enjoyable, it was also terribly frustrating. Yes we were fishing, but not where I wanted to fish, not on grounds where I really knew exactly where and how to fish. But it was a case of fish where the weather permitted, or don't fish at all.

We left Cornwall and heading towards Pembroke, driving past marks around Lynmouth and Watchet that I'd really wanted to fish, again, the weather was wreaking havoc with the plans. I've fished off Southwest Wales before for Tope and enjoyed some great success and I was truly hoping that this trip would produce the goods once again. The weather wasn't ideal with a stiff offshore wind being present for the majority of our time there.

The first day was really tough with me only having a run from one fish which I failed to hook into. The next day was somewhat better, for me at least, with three Tope being caught with another three being lost. Ronald was sadly not so fortunate. 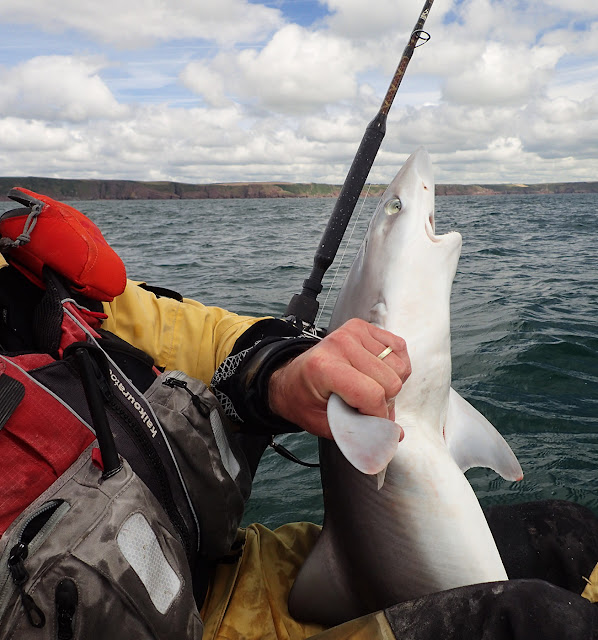 They were all smaller males, but good fun nevertheless on light tackle. I take two rods with me for Tope, though I only fish with one at a time. Fishing for Tope with two rods is asking for a disaster, whether it be a nightmare tangle or a double hookup, neither bodes well.

I use a lighter 6-8lb Shimano Beastmaster with an ABU 6500 when fishing with weights up to 5oz. If the tides dictate the use of a heavier weight I switch over to my 10-15lb Shimano Beastmaster with a Shimano Charter 1000LD. The rig is a simple running ledger, with the trace being 4' long, made up of 3' of 80lb monofilament with around a foot of 80lb wire with an 8/0 bronze hook crimped to the end. 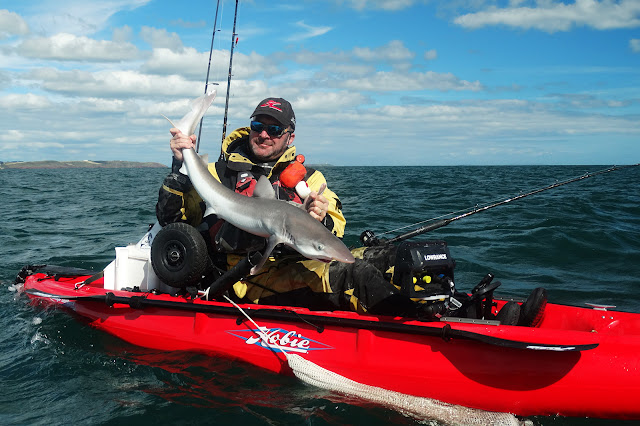 Note the bag lying in the water night to the kayak. It's a military laundry bag that's actually perfect for keeping mackerel and other bait fresh in whilst fish, alive for several hours at time in fact. It does produce quite a big of drag at times, something to be mindful of when anchoring in a strong tide. It could well be enough to cause you to pull/drag anchor. Though it's useful for this type of fishing.

Yes I caught fish, but it was hard work. As mentioned I also lost fish so it had been a great improvement over the previous day. Below is a Mackerel bait that had been dropped by a Tope, note the teeth marks, there's no mistaking what had been holding the bait!

To be continued in Part 2...
3 comments:
Email ThisBlogThis!Share to TwitterShare to FacebookShare to Pinterest 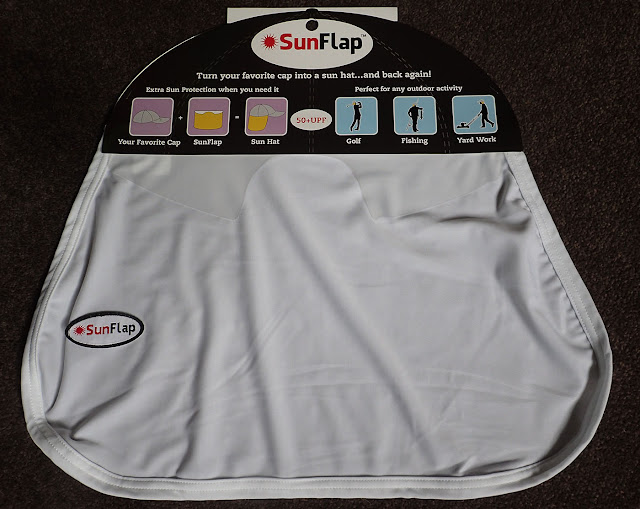 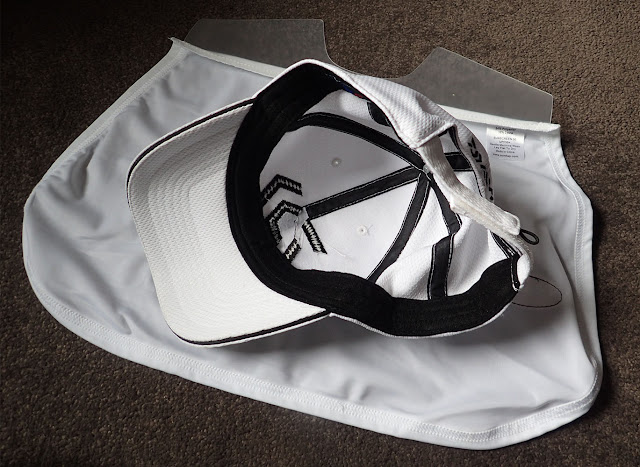 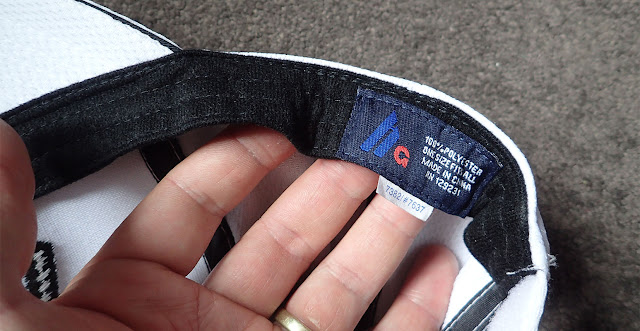 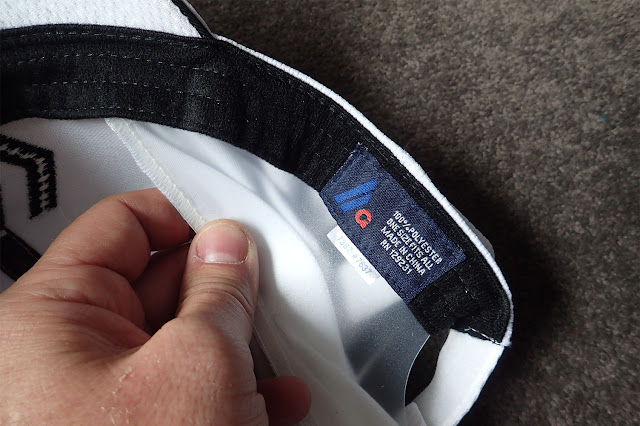 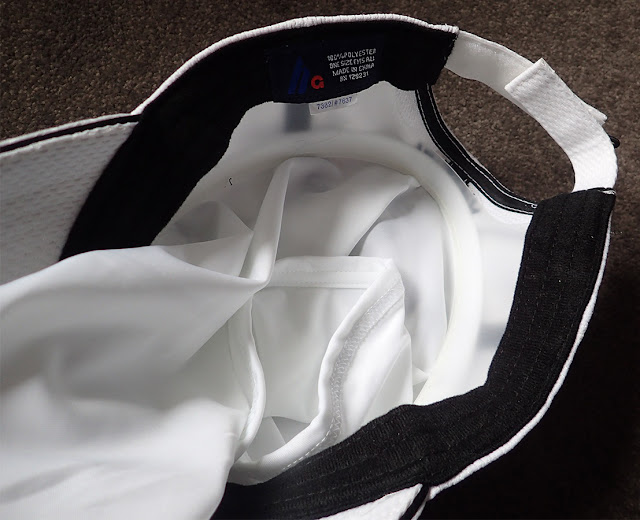 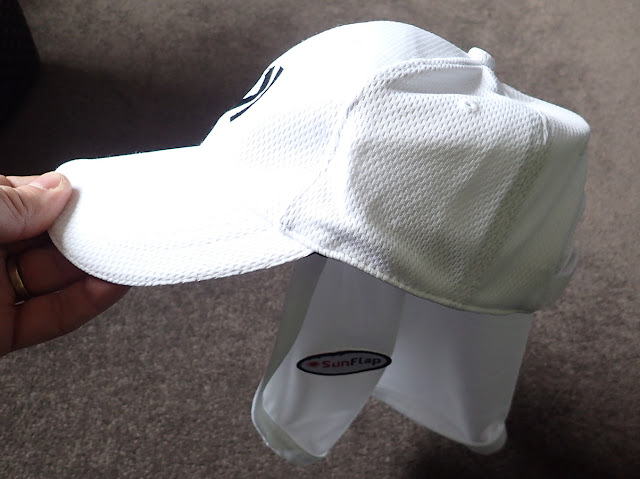 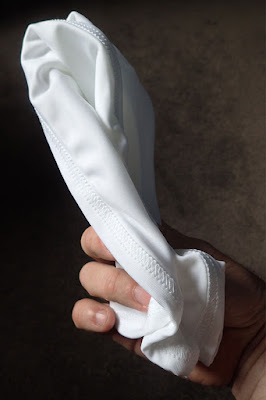 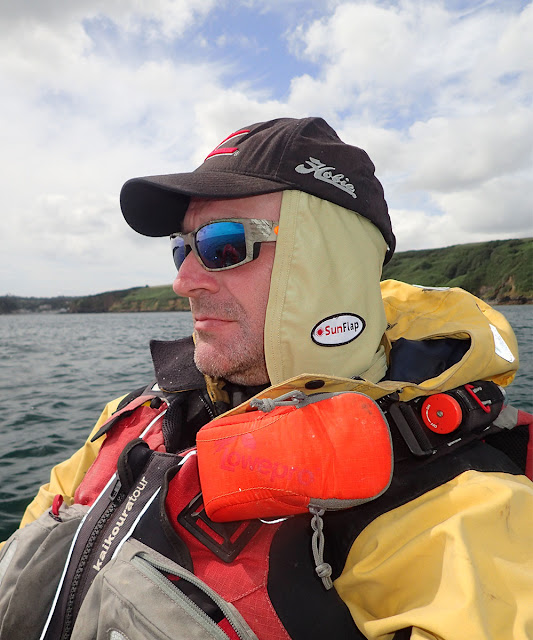 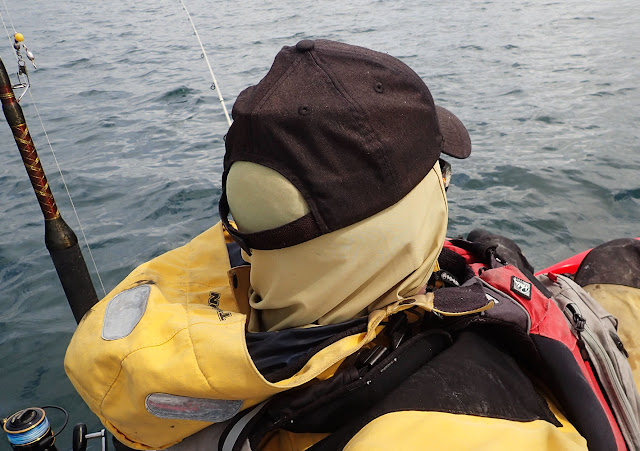 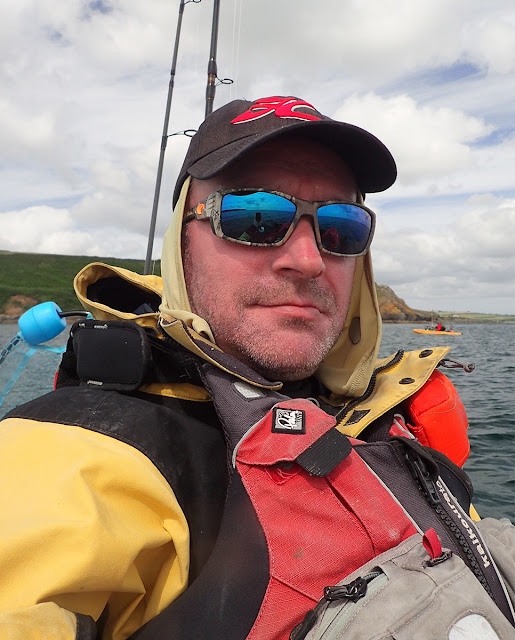 It seems pretty resistant to dirt, the micro fibre material looking as good as the day that I first shoved it into my tackle box. So would I buy a replacement when the time come?, for $15... definitely. It's a great to have accessory. Yes, you can achieve similar sun protection with a buff, but as they're up against the skin I doubt that it would have the cooling effect.
2 comments:
Email ThisBlogThis!Share to TwitterShare to FacebookShare to Pinterest
Newer Posts Older Posts Home
Subscribe to: Posts (Atom)