For a couple of good reasons I didn’t publish much about a ten day August road trip that I enjoyed with my good friend Daniel van der Post. Though I’m sat here, and the weatherman has forecast another wet and windy weekend, the third in a row!. It’s been over a month since I was last afloat so I’ve decided to see what I can recollect from our August trip.

I’ve visited and fished with Daniel several times in his own country, the Netherlands, though he’d yet to visit and fish the saltwater here in England. He’d read my reports over the years and finally made the decision to cross the English Channel and sample what I’d been taking for granted for several years. As much as I’d really been looking forward to this trip, it put a little pressure on me as I naturally wanted Daniel to enjoy some good success and leave with a smile of his face.

Over a few weeks, I did my research, whether it was on the web or mailing a few friends for some additional information. It was important that we’d be able to fish regardless of the weather, whilst ensuring that we were fishing venues that were likely to produce some memorable fish. I also wanted to put as many different species on his kayak as possible, as many of the fish that are readily available here in UK waters are a rarity, or simple don’t exist in Dutch coastal waters. One thing was for certain, we were going to be covering quite some miles in order to satisfy all of my wishes.

That said, I didn’t want to spend 10 days on the road neither. To that end, I’d decided that we’d potentially fish from South West Wales down through Devon and Somerset, to Lands End in Cornwall. Daniel was very keen to fish for Tope, so that was my number one priority.

Daniel arrived in the UK, via the cross Channel ferry, making it to my house before dark. He was to use my old 2011 Hobie Outback for the duration of the trip, it being well kitted out for the task of saltwater fishing. We spent the evening organising tackle and packing the car, it really is amazing what goes into the car for a 10 day fishing/camping trip (way too much!).

The forecast was quite favourable for the first 2-3 days, so the decision was made to head directly to the Tope grounds located in Pembrokeshire, South West Wales. As much as I’d read about how productive this area can be for Tope, I’d never visited the area myself, so I found myself relying on some information from a friend. As it turned out, the tips were good!.

We made camp on a local campsite, located reasonably close to the fishing grounds. It meant a drive every morning, though there was a beach within a stones throw distance which provided an enjoyable evening stroll.

I had packed a cool box with frozen mackerel and some sand eel, though this was only to last a couple of days at best. We were soon on the beach, checking rigs and other niff naff prior to launching. As exciting as it always is to fish a new location, there’s always the big question mark over whether or not it was going to perform. There’s no substitute for fresh bait, so the frozen bait was taken afloat, though the mackerel feathers were quickly deployed. 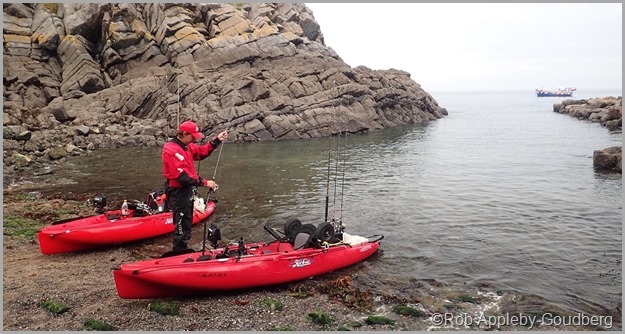 I think it turned out to be harder to catch mackerel than anything else!, though one by one we amassed sufficient fresh bait throughout the day to keep us fishing. We initially chose to fish towards the centre of a large bay. The ground was fairly clean, though not featureless. As the tide flow was not excessive I chose to fish with my lighter 6-8lb class road, a 6000 sized reel with a running ledger to a 5/0 Sakuma 545 hook. The trace was tipped off with a few inches of metal trace as there was a strong likelihood of hooking into some toothy fish. With anchors down we commenced fishing, the breeze was a little firm at times, but conditions were pretty good. All we needed was some fish! 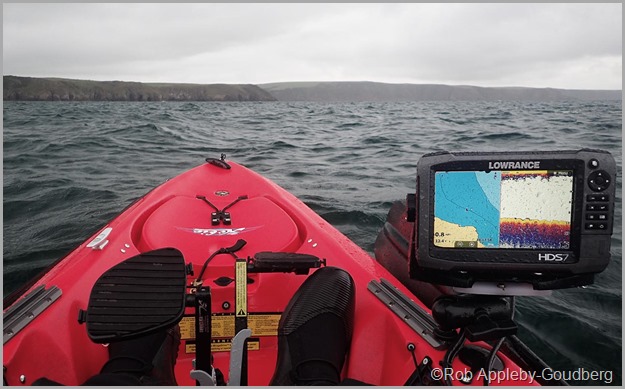 As it happened we didn’t have to wait too long to find some fish. We started to catch one tope after another and it was great fun. Though these were ‘pack Tope’, smaller fish  between 5-10kg that tend to shoal together, though on light tackle they still provided very enjoyable sport. It’s important to strike early with these fish to prevent a deep hook up. It used to be the ‘norm’ to strike on the second run, though I tend to tighten into the fish within 3-4 seconds. Occasionally the fish will drop the bait, though if left, the Tope regularly return and pick it up once more, often within seconds. I probably land 3 out of 4 Tope that take the bait, that’s a hook up percentage that I’m more than happy with, whilst minimising the risk of a deeply hooked fish. 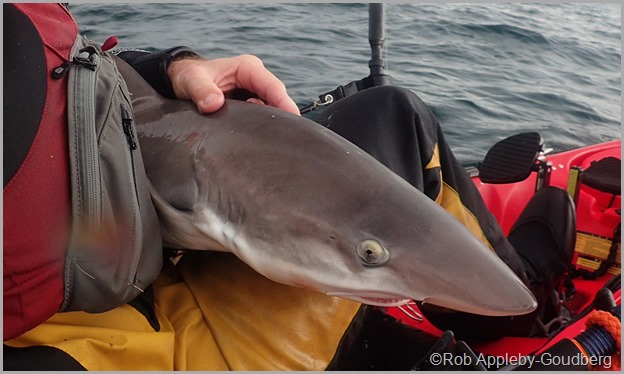 Daniel was also catching, the fishing was good, we were having a great time!.

Though after a couple of hours things went quiet, almost dead in fact, so the decision was made to move to another mark. I took us to a nearby headland to fish some deeper water.

I was concerned about the tide, though it didn’t appear too bad so once more the anchors disappeared into the depths. Both kayaks were equipped with a full length anchor trolley and a ‘clip on’ anchor setup. The latter permitted easy release of the anchor and featured a buoy so it could be left in the water to allow you to photograph the other anglers fish, etc. 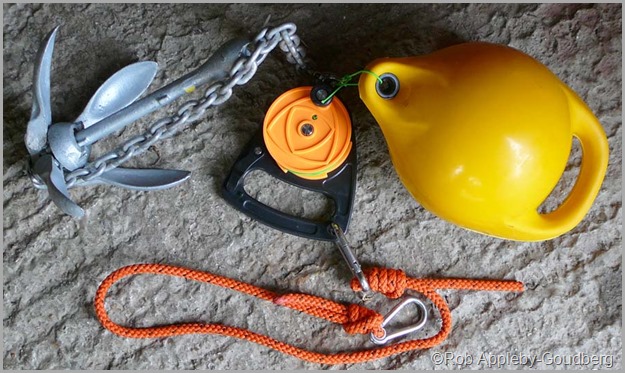 I’ve used this setup for years and it works extremely well. Returning the the anchor it was merely a case of clipping back on and swinging into the tide to fish once more.

We anchored up in much deeper water which also enjoyed a stronger tidal flow, though certainly nowhere as near as I’d feared. This was monitored throughout the session. I would have certainly had no qualms about relocating should it have become too strong. With another whole mackerel on a dedicated Tope rig (8/0 de-barbed bronze hook) I was soon fishing again. I must say that the scenery around Pembrokeshire was stunning, catching fish was honestly a bonus. Again, we didn’t have to wait too long before the baits were found and the reels began to scream. 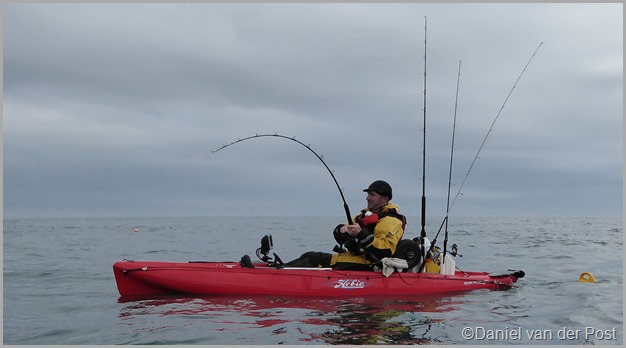 With Daniel hooked up into a fish, I simply recovered my bait, unclipped the anchor and pedalled over to take some photos. This is where the clip on anchor system comes into it’s own.

We fished as light as possible given the tide, with minimal lead used to hold bottom at all times. We were also equipped with lure rods in the hope of finding some Bass and Pollack later in the day. 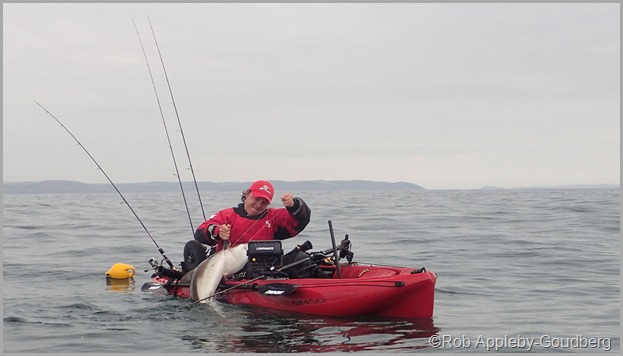 The easiest way to bring a decent sized Tope aboard the kayak is to grab a pectoral fin pull the fish onto your lap. 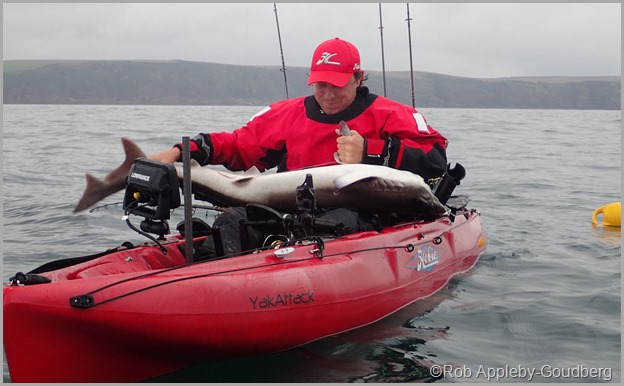 With the Tope on board, they often settle down quickly when positioned on its back (tonic immobility). Though it doesn’t always work! 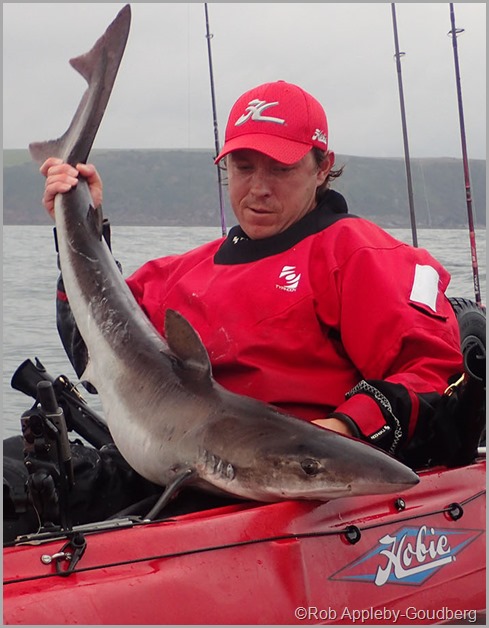 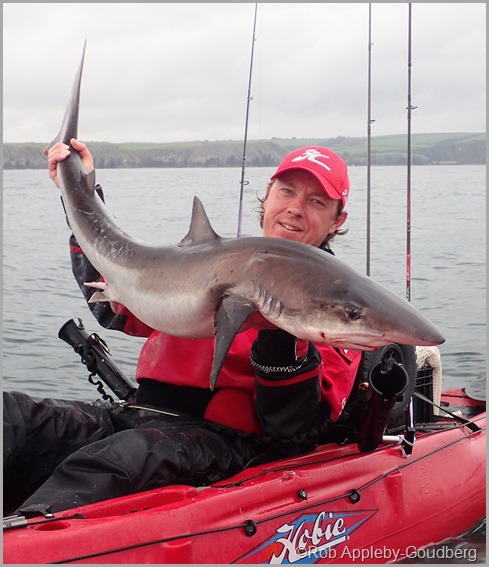 All fish were quickly photographed and returned, apart from a few cod and bass for the table, I very rarely keep any fish these days. 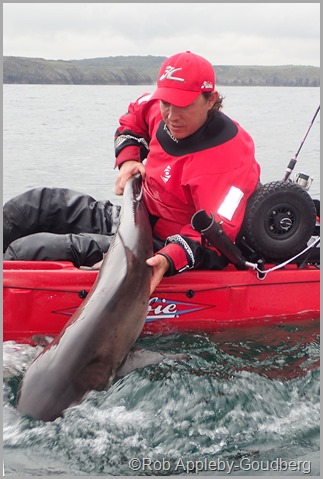 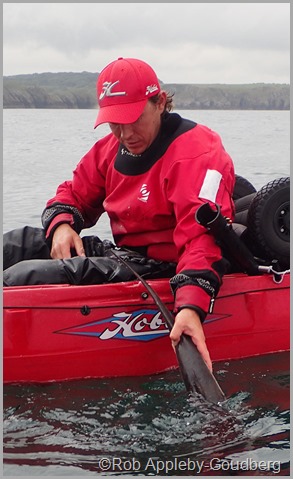 I hadn’t taken my GoPro with me so I relied quite heavily on Daniel to take the occasional photograph for me. I’ve caught quite a few Tope over the years, but it’s always nice to have a couple of photos from every trip. Just to show that I didn’t blank if nothing else!. My biggest fish of the day ‘was released early’ before Daniel made it over to my yak! 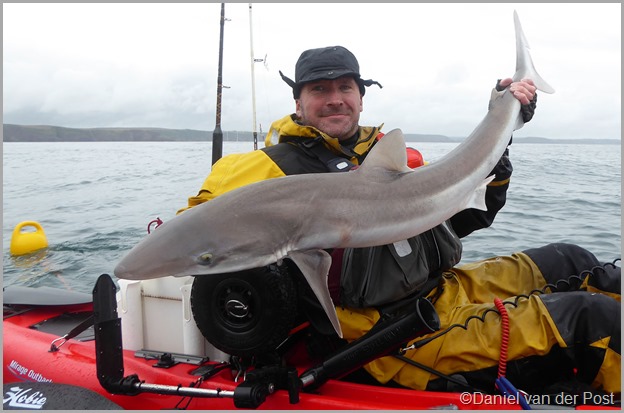 We fished this mark for a couple of days, managing 22 Tope between us which I consider to be extremely successful. Daniel was certainly pleased, the No.1 target had been caught!. Other species were caught including Bullhuss, Gurnard, Ray, Launce, Dogfish and some Bass & Pollack to lures. 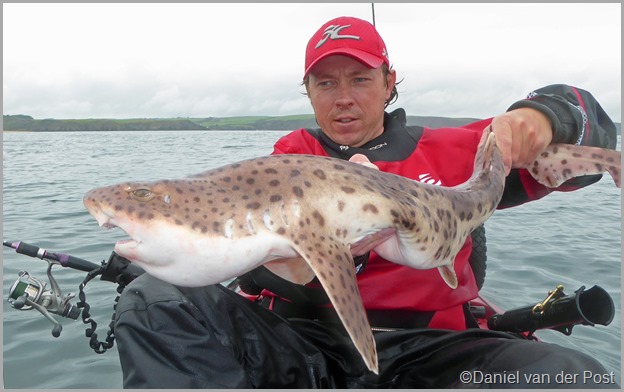 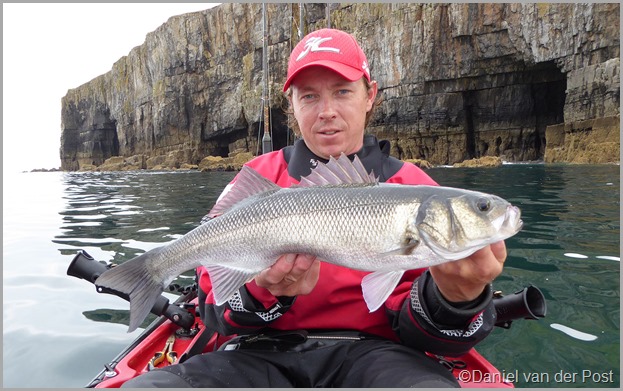 It had been a cracking start to the trip. Though the weather had began to turn with the South Westerly winds picking up to a point where it was getting rather uncomfortable to fish. We’d done well, so with the camping gear packed we headed around the Bristol Channel, leaving the northern side and heading to the southern side.