Rigging the 2015 Hobie Outback and Adventure Island for Structure Scan

I’ve fitted the Lowrance HDS 7 Gen 3 onto my 2015 Outback and it came with a Structure Scan transducer. Structure Scan combines down scan imaging and side scan imaging. It’s certainly great technology to have on a kayak, some would say an overkill, but I’m really enjoying having such enhanced capability on the kayak.

However, it comes at a slight cost, that being extra equipment in the shape of a rather large transducer with associated cable. The Structure Scan uses it’s own transducer in addition to the standard transducer that covers CHIRP, Broadband and Down Scan. The real downside with this new transducer is that it needs to be mounted externally, direct into the water beneath the hull of the kayak. This isn’t an issue on a boat when it’d be mounted aft on the transom, but on the kayak it’s more of a headache.

I originally purchased a RAM transducer arm though I didn’t find it rigid enough, I could shake it about an inch at the base when locked onto a RAM ball. I wanted something far more rigid. It was also quite chunky, with the plastic tubing running down the arm looking like it would create quite some drag. Another issue with the RAM mount was that from the seat it was hard to tell if it was actually locked in the vertical position. I didn’t like it at all.

Despite having paid good money for the RAM arm I decided to go down the DIY route, something I should have probably done at the outset!. It needed to be solid and fully retractable. Oh, there was one other VERY important requirement, it needed to be easily transferable to my Adventure Island as required. The budget was also very limited!

Here’s the result followed by an explanation of how I did it. The biggest issue was getting a lockable hinged joint that was going to stand the test of time around saltwater. After much surfing of the internet I came across an umbrella mount that was designed to fit onto large seat boxes as used by river & lake fishermen. They came in varying lengths, so I picked the one closest to my requirements. 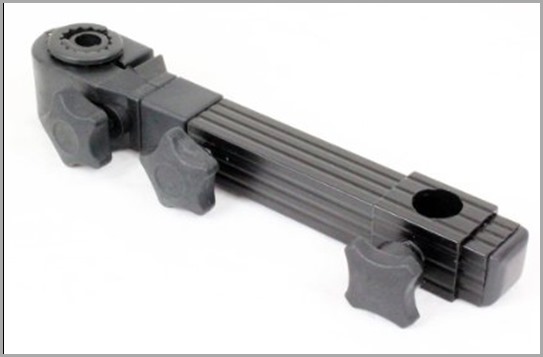 This featured a fixed hole mount at one end designed for an umbrella and a lockable rotating joint at the other end. The rotating end featured a couple of rubber adapters to permit it to be fitted to differently shaped mounting legs. I could see the potential of mounting the fixed end to a mounting pillar on the kayak and the rotating end to a transducer arm. If I was to have similar fixed mounts on both the Outback and AI I’d be able to swap the arm between them (theoretically!). A plan was forming…

Next up were kayak hard points onto which I could mount the swing arm. I ended up using some pieces of stainless that I had lying around. Utilising some plate and tube, I welded them up into a suitable pillar shape. The base plates differed to permit a mounting option for both the AI and the Outback. Here’s how they looked after painting. 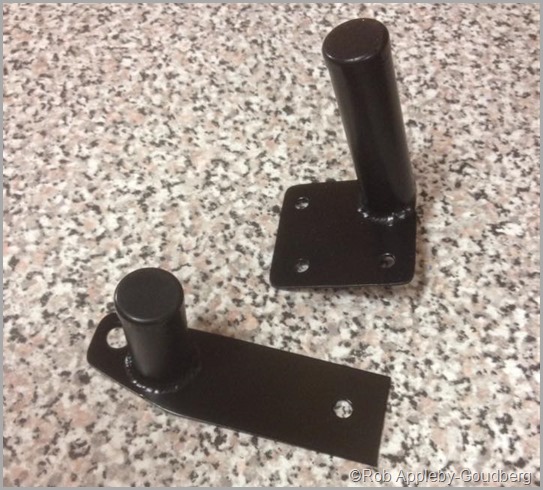 The top one was for the Outback. There was also a bolt hole in the post of each mount to ensure a rock steady fix to the kayak hull. Any flex would only occur via hull flex. Here’s the mounts as fitted to both kayaks. 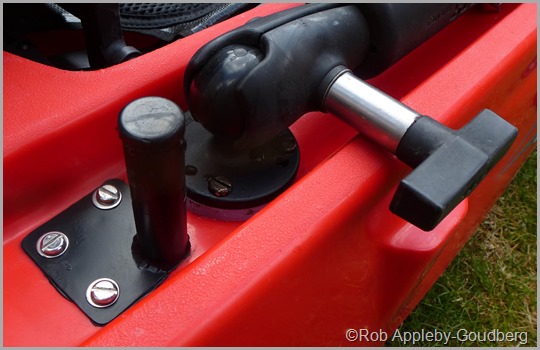 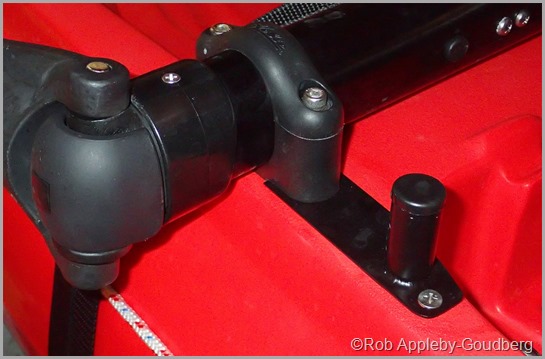 On offering up the umbrella arm I’d decided that it was too long, I wanted the vertical arm for the transducer to be close to the side of the kayak. I cut a 2” section out and TIG welded it back together. Here’s a photo of the shortened arm, weld clearly visible.

For the vertical Arm I used a length of 12mm A4 stainless tube, cut to a length that would suit both the Outback and the AI. To mount this into the swivel section on the modified arm I made a tubular sleeve out of thick nylon board. This was an interference fit for the stainless tube and was firmly drifted into place with a hammer!. This permitted the clamp on the swivel end of the arm to be tighten around the sleeve on the stainless tube. If you look closely in the above photo the blue sleeve is only just visible as I coloured it in with a blacker marker pen purely for aesthetics!.

That left the transducer itself. I needed some sort of plate to mount the transducer to the stainless arm. I ended up taking the plastic one off the RAM transducer arm and fitting it to the end of the tube. I’d thought of this much earlier on to be honest which somewhat dictated my choice of 12mm tube. It certainly made for a neat solution as it was made specifically for the LSS1/2 Structure Scan transducers. 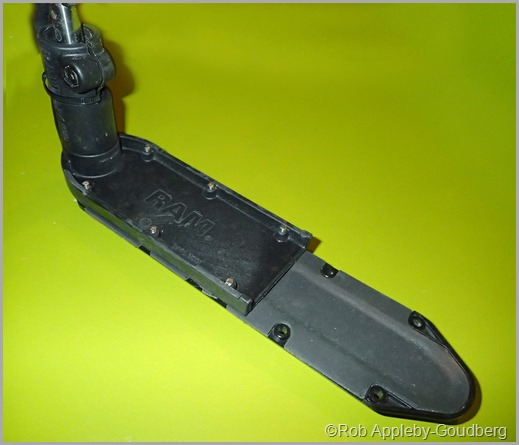 That was basically it, the retractable transducer arm was complete. To ensure that the rotating joint locked securely in both the horizontal and vertical positions effectively every time, I filed two flats onto the spigot that the locking screw tightened down onto.

Here it is, the retractable and transferable transducer arm. 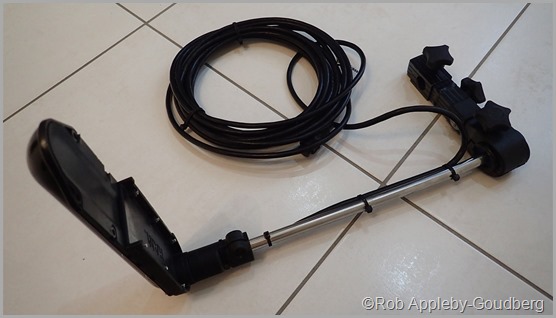 The spare cable was left coiled and sits beneath the seat of the AI and Outback. With careful routing the cable it’s quite unobtrusive and doesn’t pose a snagging hazard. 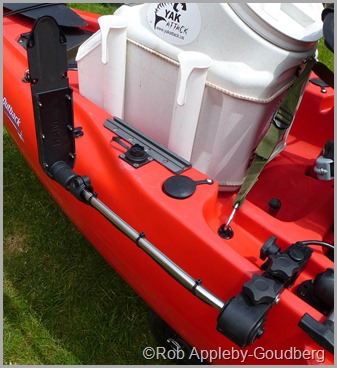 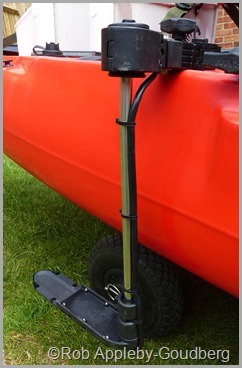 Fitted to the Outback 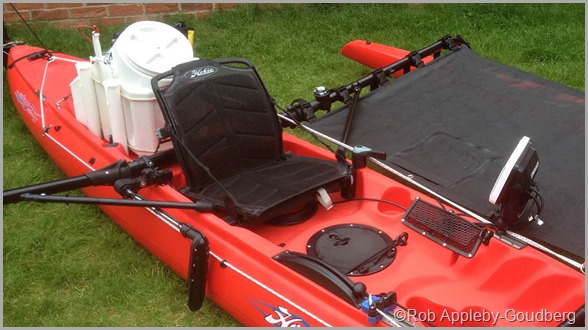 Fitted to the Adventure Island

It’s easily deployed and retracted from the seating position and due to the flats I filed onto the swivel arm spigot, it doesn’t take much effort to lock it securely into the correct position. Fitting the arm is simply a case of pushing it onto the kayak mount and locking it at a right angle to the side of the kayak, it literally take seconds to fit and remove. Most importantly it’s solid, something the RAM arm was not. Yes, it has the potential to be a pain if it fouls something underwater, something to be considerate of. Though not really much different to the Mirage Drive, etc.

I’ve used it a few times now and it works exactly as I’d hoped. Sure, Structure Scan is not a cheap upgrade, though I’m really enjoying using it. The imagery is excellent and I being able to view underwater features both directly beneath and well away from either side of the kayak in great detail is tremendous.

I actually moved it beneath the hull as per my Outback. I’d never been a fan of swing arm
Transducers.