It’s been a while since I rigged the Adventure Island for fishing. Well to be honest it’s not quite finished, which is why I’ve not posted a rigging article on it yet. Almost there!

I’ve a 10 day road coming up later this month and I really want to take as much frozen mackerel as possible with me. The freezer is currently empty so I had only mackerel in mind when I launched at the weekend. Obviously the AI isn’t as convenient as the Outback when it comes to launching, plus I would be taking the trailer, hence planning requires a little extra consideration!.

I decided to launch into the mouth of Langstone Harbour from the Hayling Island side after a little advice from my friend Jamie. Parking was easy enough early in the morning, though it’d clearly be a real pain later in the day on these summer days. Launching towards high water could be achieved by dragging the AI over a bit of a hump and straight down to the water, though the wet sand was softer than I'd have liked! 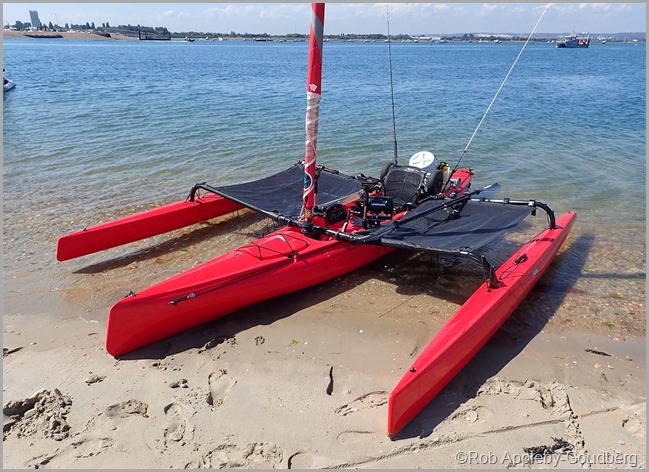 Another consideration with the AI is of course wind. The forecast was for very light winds of 4-6mph, though this would potentially push me along at pedalling speed. That said, experience has shown that the wind in the Solent is often stronger than predicated.

I deployed the trampolines as I wanted to see how effective they’d be to fish from, otherwise it was my standard fishing setup, combo fish finder was fitted, with almost everything else contained within my dry box. I also planned to do a little trolling so I fitted a pair of Scotty rod holders on extenders ahead of me.

There wasn’t enough wind to sail to begin with so I pedalled out of the Harbour on the ebbing tide and out into the open sea. I trolled as I went, though there was no activity to report. 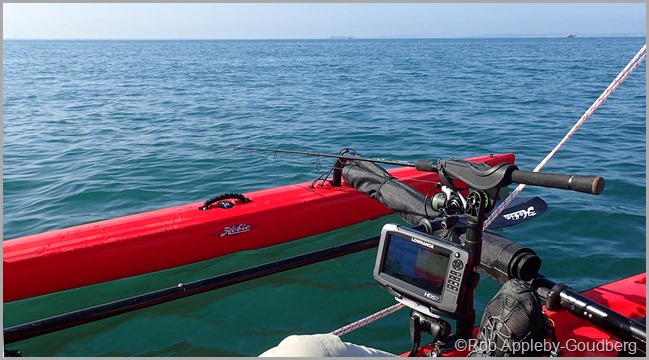 I’d arranged to meet up with Jamie and after a brief radio call I headed off to his general location a mile offshore. He was with a couple of other kayak anglers and they’d managed to bag a few mackerel, though not the hoards that I'd hoped for. I decided to head off to the Solent forts, into deeper water where I hope there’d be a few shoals moving about.

The Solent Forts were built as part of the British sea defences designed to protect the port of Portsmouth against seaborne attack. They are popular marks for mackerel as well as attracting bass. The plan was to circumnavigate the three forts, Spitbank, No Man’s Land and Horse Sand. 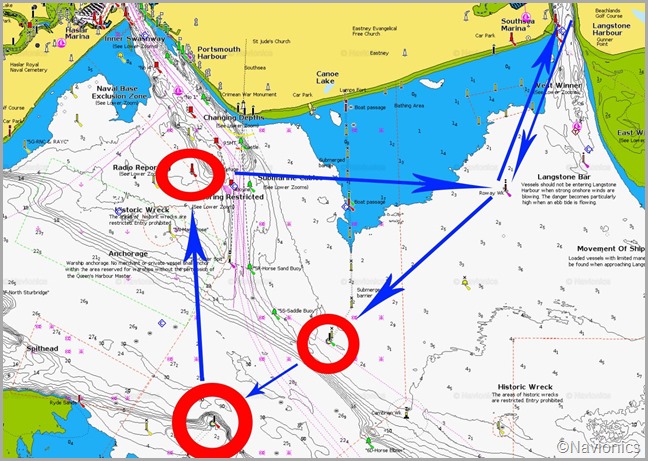 Fortunately the breeze picked up very early on, and despite being light I was pushing out directly towards Horse Sand fort at around 5.5mph, quite respectable considering the conditions!.

It was too fast for trolling, though I could have furled the sail to sloe things down. Instead I just chilled out whilst tweaking the rudder to maintain a steady course. Despite being 2.5 miles away I was there in 30 minutes, it certainly beats pedalling or paddling! 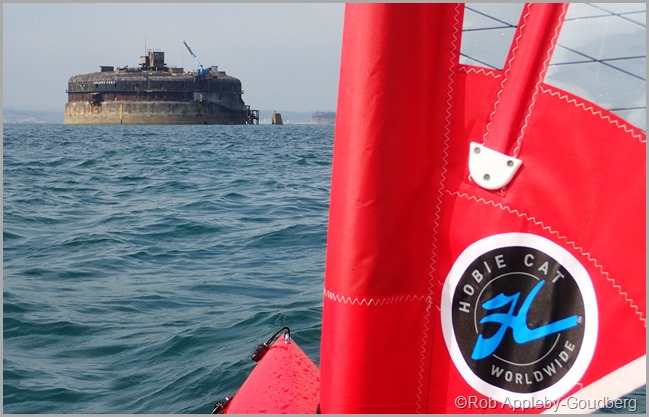 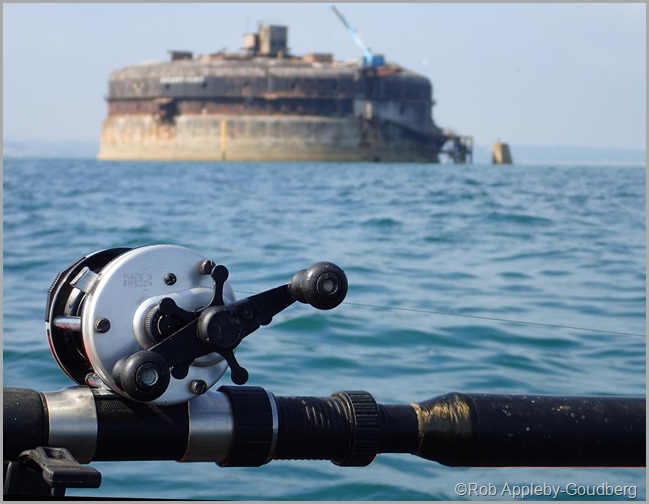 I circled Horse Sand fort a couple of times though I was unable to locate any definite shoals of mackerel, despite having sailed over a couple of small shoals on the way out. After 20 minutes of feathering I was getting a little frustrated so I decided to move further out to No Mans Land. I could see that there were a couple of boats already fishing the fort close in, so I was hopeful that there were mackerel in the vicinity.

It was only a mile or so to the next fort and the breeze had freshened a little more, so I was making over 6mph, not bad for such calm conditions.

I eventually found the odd mackerel here and there. No shoals on the finder to speak of, just feathering in likely areas with the odd fish to show for it. It became clear all too quickly that I was unlikely to be catching the numbers that I’d hoped for.

Despite the lack of mackerel around No Mans Land Fort, the presence of two or three boats attracted more like flies. Within 15 minutes there were about a dozen boats drifting around in close proximity!. I saw one mackerel caught during this time, it was time to move on.

I headed in the direct of Spitbank Fort and as I passed over the far side of the main channel, the drop off was holding a few fish. The feathers went down and I was soon into a multitude of small mackerel. Big enough for bait, so they were kept for the freezer.

Spitbank Fort was equally as fishless as the others so I headed back towards Hayling Island after a short time. I managed a somewhat disappointing 21 mackerel for the session, I’d been wanting 50+. I’ve since heard that they were there in numbers a couple of days later, typical.

That said it was a thoroughly enjoyable trip on the water. It’s the first time that I’ve seen all three forts close up, the weather was good and I had a small bag of fish to show for my efforts. I hope to repeat the trip this weekend in the hope of completing the re-stock of the freezer.

The trampolines are a great addition to the AI, though as much as they happily support my 92kg weight, I didn’t find them ideal to fish from, I want a hard platform to sit out from the cockpit. I’ve always planned to build a set of bench seats (Hakas) for the kids to sit on as well as other plans that I have. That project is now top of my list as I can really picture myself sitting on and fishing from them. Watch this space.