The Hobie fishing kayaks (bar the Pro Angler) come fitted with round hatches. I’ve never been a huge fan of these, if for no other reason that I much preferred the practicality of the rectangular hatch that I’d fitted to my Big Game. From about 2014, Hobie had flattened the area on the Outback around the centre hatch to permit fitment of the rectangular hatch from the Pro Angler as an optional upgrade. This obviously didn’t help me on my older 2011 model Outback so I’d been stuck with the round hatch. I did greatly improve it’s effectiveness by fitting a large hatch liner, something I’d copy during this upgrade.

Below is a photo of the finished product… followed by an explanation of how I achieved it. 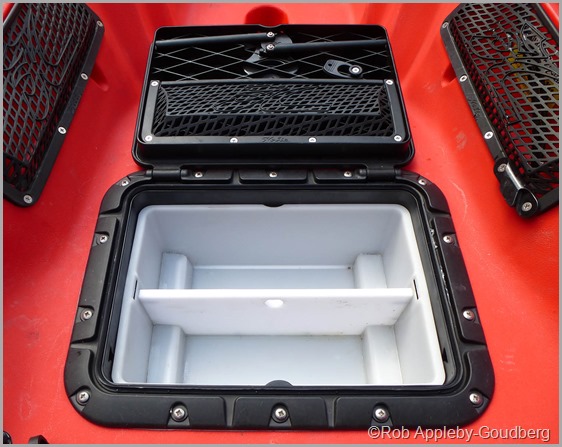 The hatch kit was ordered from my local Hobie dealer, this consisted of the hatch itself, an internal securing bracket and a foam seal. The screws had to be ordered separately. The hatch is a very study affair. It can be seen below next to the round hatch for comparison. 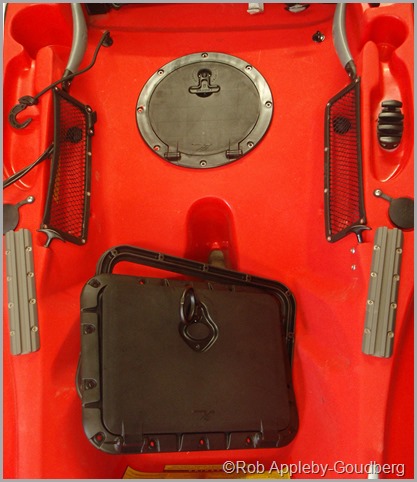 Fitment is actually really straightforward, though it’s really is a case of measure and check 2-3 times before making a cut, this is not something that you get a second chance at!.

The round hatch is held in with 8 screws. Remove these and the round hatch lifts straight out, remove the foam seal and recover the securing bracket from within the kayak. Keep them as spares as they’re identical to the rear hatch.

The hatch can be mounted in two positions as shown below. I chose the standard ‘across’ fitting. It’s a personal thing, sit in the kayak and try both, see what works best for you. 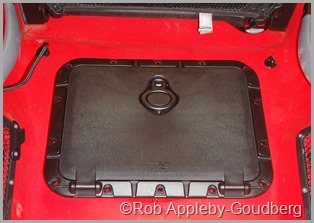 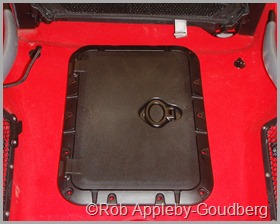 Once that decision had been made I marked out the cutting area using the back plate as a template. It’s always best to remove too little and take more away as required. Again… CHECK several times before you begin to cut. I drilled a couple of access holes in the corners to permit me to use a jigsaw. 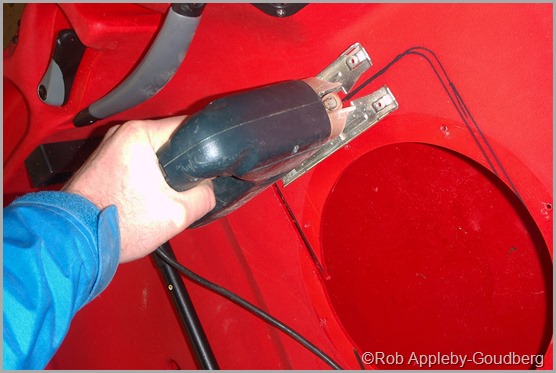 That’s the hard part done!.You might find that the hatch doesn’t drop in at this point. Fear not, look to see how much it’s out and remove additional hull material as required. I’ve found rotary sanding wheels mounted into an electric drill ideal for this. Finally, clean up any rough edges using some sandpaper. 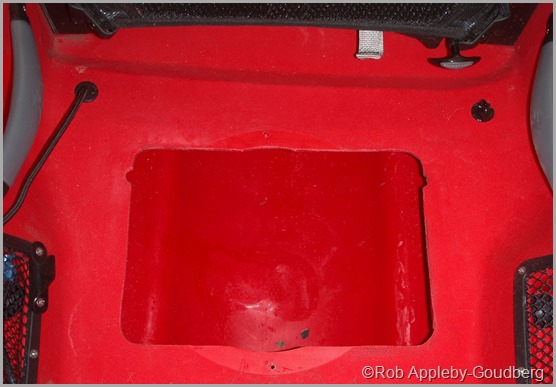 With the hatch placed into position mark up and drill out the screw holes. It’s simply just a case then of sliding the rear bracket into the hull, offering it up into position and screwing down through the hatch hole into the back plate (don’t forget the hatch seal!). A third hand may prove useful at this point, though once the first couple of screws are in, it’s plain sailing. Just nip them up, don’t over tighten them as it’ll potentially result in stripping the threads in the back plate. If that was to happen, I’d drill the back plate holes out slightly and fit nuts and bolts.

So here it is, the rectangular hatch upgrade, perhaps an hours work. 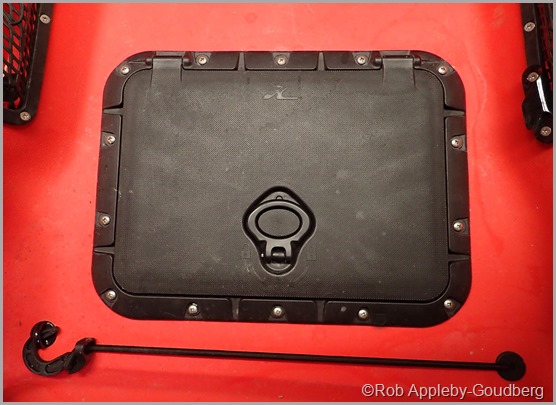 You can order the hatch with a tackle box cantilever system that’ll permit the fitment of two Plano tackle boxes. This wasn’t something for me, I really wanted as much useable room within the hatch as possible. As I mentioned earlier, I had decided to incorporate a hatch liner as per my earlier model Outback. For this I sourced a large size heavy duty rubberised dry bag designed for military backpacks, etc. It’s about 120 litres in size.

Here it is, shown against the Outback to give an idea of its size. 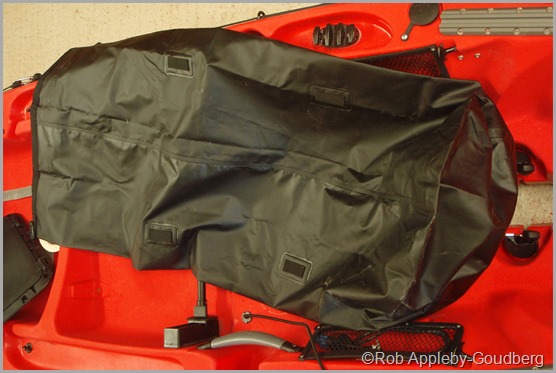 Using the backing plate as a template I made a cut out in the bag. Once that was done I used Marine Goop to glue the backing plate into position. This was really easy to do. Once dry the backing plate holes can be felt through the rubber material of the dry bag, I punctured these with a spike to make fitment that little bit easier. 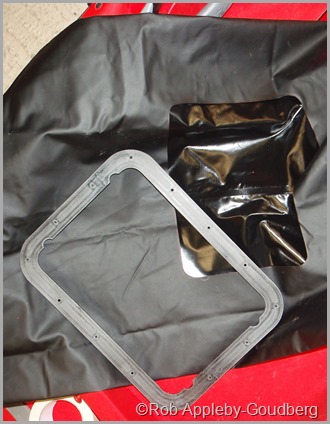 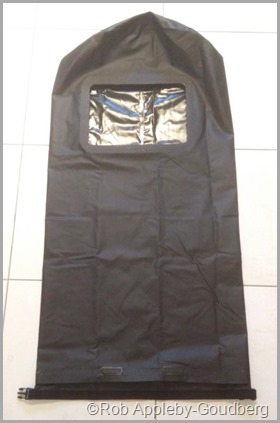 I ‘pre-measured’ the bag by lying it is position on top of the hull. This permitted me to gauge how much I needed to roll up prior to securing it around the transducer scupper. With the bag inserted into the hull it’s quite an easy job to get your hands back and clip the rolled up bag around the scupper tube. With that done, drop the hatch into position on top of the seal, lift the mounting bracket up against the hull and screw it all up.

It created a really large useable storage space, far better than the hatch opening up directly into the hull. The picture doesn’t do it justice. This space extends from the rear of the Mirage drive well back to the transducer scupper, as well as several inches either side of the hatch opening.

Was it straightforward?, yup!. Below is the finished hatch bag installation. You can also see that I’ve upgraded all the mesh tackle pockets with the rubberised versions from the Pro Angler. It’s well worth doing, no more tangled hooks! 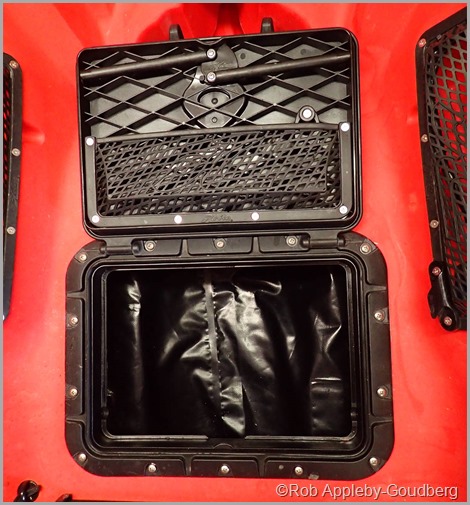 Well that’s not quite the end of the story. I also purchased the tackle insert for the rectangular hatch, a while plastic affair. I believe that is came with a removable fabric strap, though I lost before I got around to using it!.

With the hatch all fitted I dropped the tackle insert into the hatch… it didn’t fit!!!. The insert appeared to be too high. I got straight onto the internet and it quickly became apparent that it’ll fit some new Outbacks, and not others?!. The tolerance for fit is quite tight and when a kayak hull is removed from the mould it can move by up to 5% as it cools. This apparently accounts for the inconsistency of fit. Not ideal, but as mentioned this insert is meant for the Pro Angler.

I’m not one to be beaten easily so I set about modifying the new tackle insert. The corners were removed, inverted and glued inside of the tackle insert. It was the corners that had been fouling the hull so this modification overcame that. 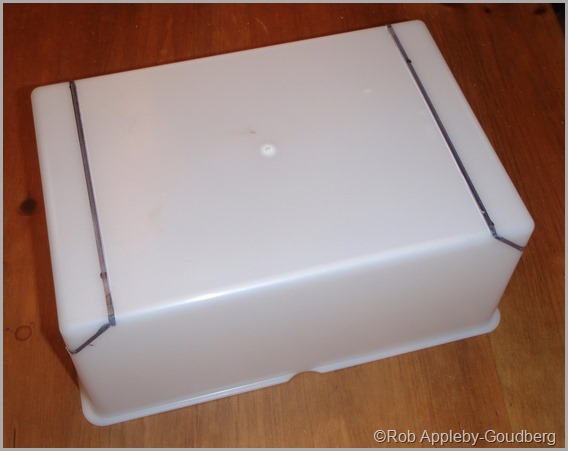 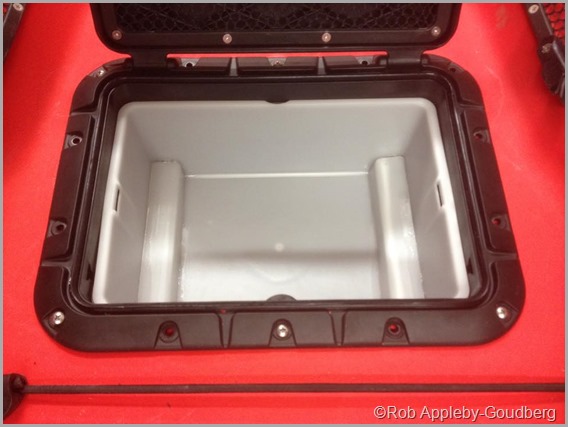 I then made a centre divider which was secured into place using stainless screws and Marine Goop. All joins were then fully seal to create two watertight compartments. The result?, a removable tackle/bait tray.

As all seams are fully sealed I can use wet baits without the juices leaking into the hull or cross contaminating the adjacent compartment. Adding the centre divider really stiffened the whole tackle insert up and made it far more effective. A finger hole was drilled into the top centre of the divider to enable it to be easily removed. 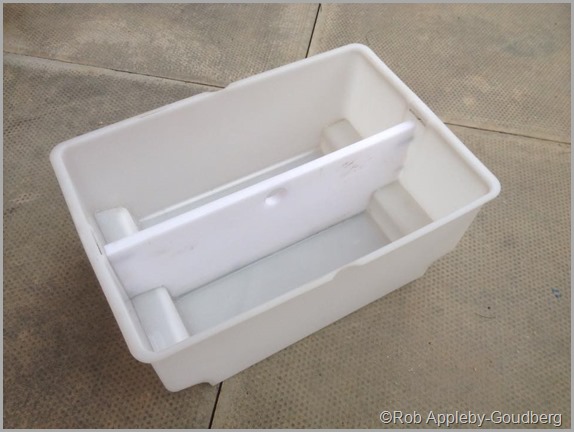 Even with the modified tackle insert fitted into the rectangular hatch, there’s plenty of room to fit small tackle boxes around it. Definitely one of the best modifications I’ve done on my new Outback. 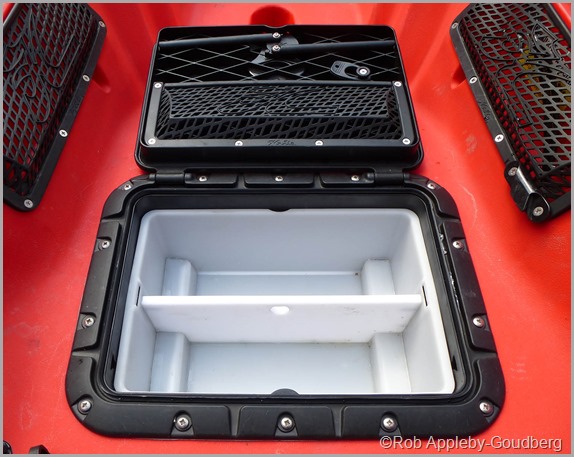