Rigging the Lowrance HDS7 onto a 2015 Hobie Outback

I’d previously used the Lowrance Elite 7 HDI on my older Outback, though with the arrival of the 2015 model Outback I was going to upgrade the electronics fit to the new Lowrance HDS7.

I’m often asked if the 7” head unit is too large for the kayak. I have it mounted on the side of the Outback where it’s readily to hand, though importantly I’m not really having to use a paddle, only rarely when I launch/recover. With no paddle the mounting position is less of a concern, though throw a paddle into the equation and things become far more difficult!. Now that I’ve used a large screen for quite some time, I’d not willingly return to a small screen unit. That said, I’d not really want to go larger than 7”.

The new model Outback has some real improvements over the old model. For now, the one that’s of most interest is that it’s Lowrance ready!. It has a dedicated scupper hole in which to mount the transducer and there’s also wiring glands to permit a quick and neat installation. 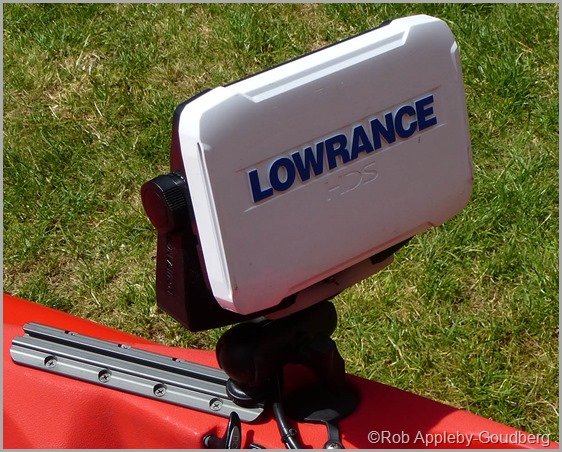 As mentioned I’ve experience of this sized unit on an Outback. My previous rigging had proved successful so I wasn’t going to attempt to re-invent the wheel as they say. It was going to be side mounted, I was going to use a length of Geartrac as it’d also permit the fitment of a rod holder, sailing controls, camera mount, etc when needed.

There’s a wiring gland in both side pockets as well as one positioned just aft of the transducer scupper beneath the Vantage seat. The Outback comes with a wiring adapter kit to allow fitment of different sized cable glands as required. First job was to fit the transducer.

Access to the transducer scupper is gained from beneath the hull. Here there’s a cover that is retained with three crosshead screws. Remove these and the cover and you’re good to go. 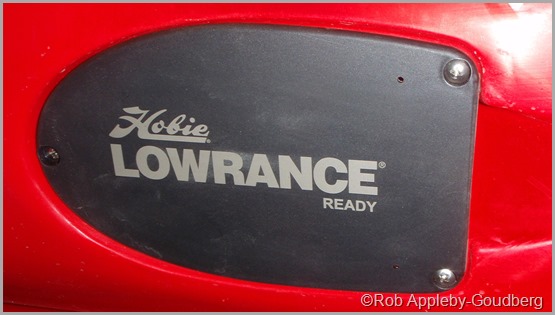 The 28/200Khz transducer is mounted to the back of this cover plate as per the Hobie installation manual. It’s quick and simple taking only a couple of minutes. All parts required are within the supplied Hobie kit. NOTE: it’s highly unlikely that the 50/200Khz transducer will fit! 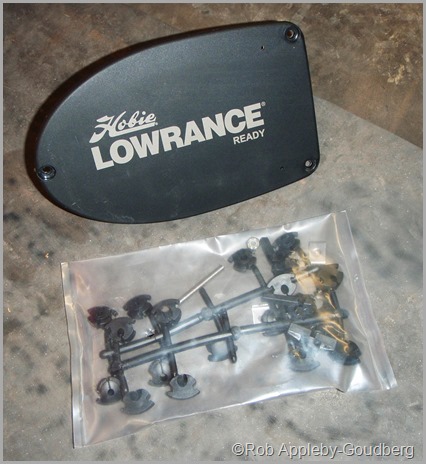 Below is the mounted transducer ready to fit back into the kayak. note that there’s a 3-4mm gap between the base of the transducer and the mounting plate, as per the instructions. 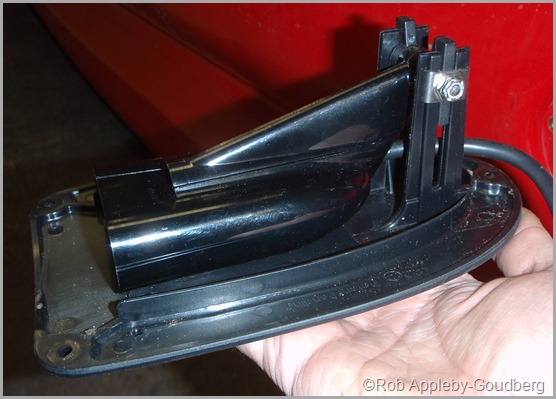 The transducer cable is threaded up into the scupper hole and pulled through, the transducer plate assembly is then secured back into position into the hull of the Outback using the three crosshead screws. 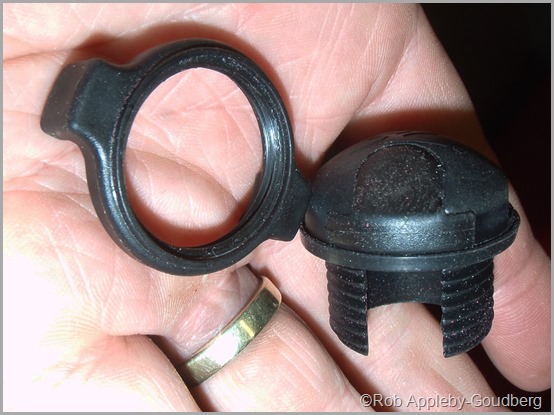 The correct gland adapter needs to be selected from the fitting kit and passed down over the cable so it sits up against the mount. This can be a little fiddly, some soapy water may help with fitment. With all the cable slack passed into the kayak and the gland correctly positioned, it’s ‘simply’ a case of passing the securing nut over the transducer cable plug, feeding it along the cable and screwing it up from within the kayak to lock the gland into position. This is again a painful stretch!

The finished cable installation should look like this, very neat.

From within the kayak the transducer cable can be routed forward. There will be a lot of slack cable on completion of the installation so it’s worth keeping it neatly coiled to permit the spare coils to be secured to the transducer supper with a ty-wrap, etc.

I decided to fit the head unit to the right hand side of the kayak, so I fitted an 8” length of Geartrac 175 just ahead of the flush mounted rod holder adjacent to the side pocket. The hull in this area is several millimetres thick so I mainly used the supplied self tapper screws, substituting two for nuts and bolts with penny washers fitted internally for additional security. 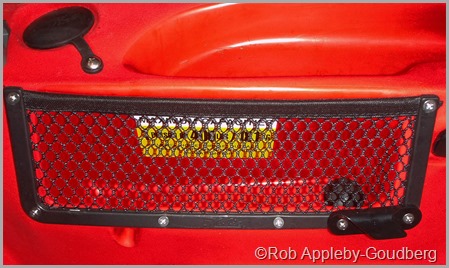 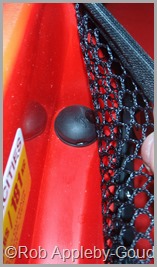 A different cable gland adapter (twin hole) needs to be selected from the installation kit for the next stage as both the power cable and the transducer cable are passed through the hull in the side pocket. With the head unit positioned in my chosen position the correct amount of cable can be passed from the inside of the kayak, through the cable hole and fitted to the head unit. By fitting them it’s far easy to produce a neat installation by not having excess cable present. With both the power and transducer cables in position the cable gland can be secured using the same method as the rear one.. though its much less of a reach!

Here’s a photo of the looming fitted and attached to the head unit. 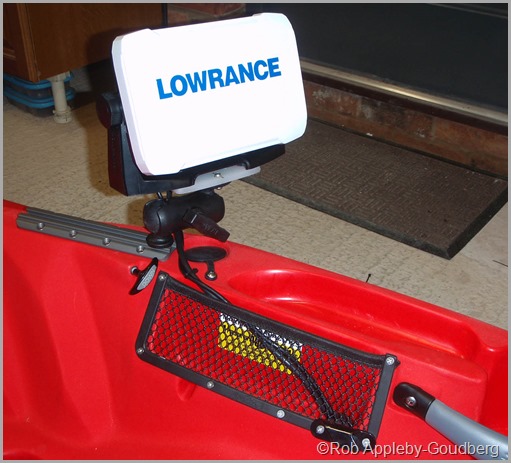 The side pocket can also be used to stow the cables when the head unit is removed, it actually works really well. 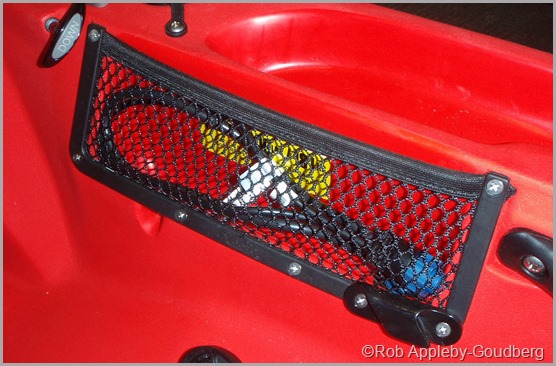 Obviously the unit requires power so the power lead needs routing to a suitable 12v source. I’m currently using a 12v 12Ah SLA battery which is giving me 12-16 hours of useable battery life on the water, enough for a couple of sessions. This is housed in a durable dry bag with waterproof electrical connectors, I’ll post an article up on this at a later date.

good review article, this fish finder is good for kayak and small boat

amazing review friend. Thanks for pointing out such stuffs.