For a couple of years now I’ve fancied having my own livewell on the kayak. I did have a half hearted attempt a year or so back with an old cool box, though that was deemed a failure in the very early stages.

There’s another issue, just how often am I actually going to use the livewell?, perhaps a dozen times a year at best I reckon. The last thing that I wanted to construct was something that was just going sit on a shelf in the garage taking up valuable space. However, if I could produce a lightweight box that was suitable for general kayak use as well as the occasional use as a livewell that would be good news.

Basically I wanted something:

As much as I like my Yakmate 3, after a couple of years it’s starting to show a little wear, though it still has a lot of life remaining. The downside of the Yakmate is that it’s not dry. The base is full of drain holes so when the tankwell is awash with water the Yakmate is getting wet internally. If it rains the Yakmate will take water in along the upper fore and aft edges.

Yes, I know, kayak fishing is a water sport, though having dry storage on the kayak is advantageous. I’ve never fancied a pure kayak crate modelled on a milk crate, I like to keep my gear dry when possible.

I’ve spent considerable time surfing a couple of US forums as well as the videos on Utube. I’ve seen a handful of livewells that utilise a pet food container, this being watertight in its own right was a good starting point. It was also rigid as well as being lightweight. I decided to go down this route and purchased the model that seemed best suited to my needs. 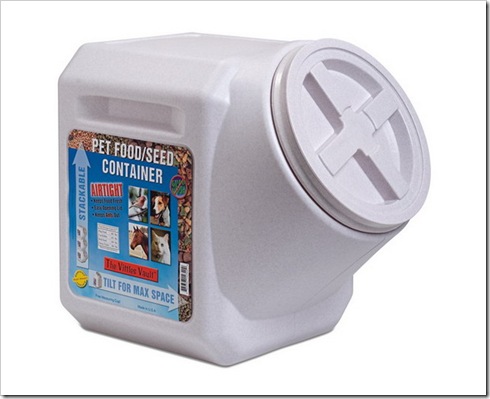 The lid has a coarse screw so it’s easy to remove and refit even with cold hands. Positioned with the lid uppermost and facing forward (not as shown above!) it provides an excellent view into the container when sitting side saddle on the kayak.

As mentioned, I wanted this container to double up as an everyday tankwell unit (crate of sorts), as well as an occasional livewell. This blog entry will concentrate on making it into a dry box, though you will see items pertaining to the livewell fitment during this article. I intend to cover the livewell components in more detail in a later article. 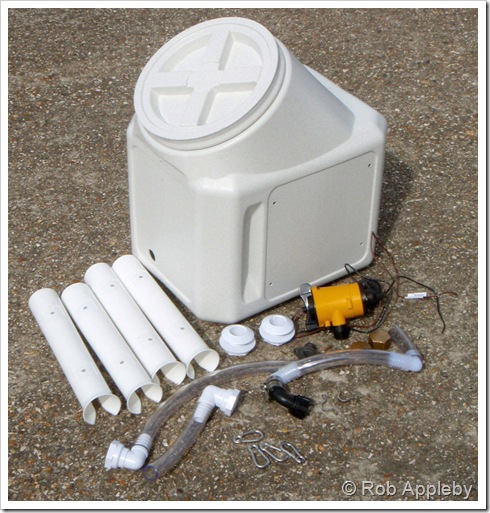 As can be seen above the box has already been drilled to accommodate the rod holders. Also visible are overflow outlets (through hull connectors), aerator pump, carbine hooks, etc. Below is a photo showing the rod holders fitted as well for as for and aft securing points. Also visible is a drain on the forward lower face. 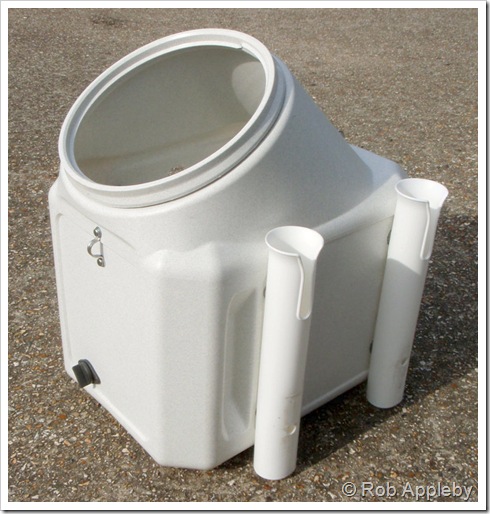 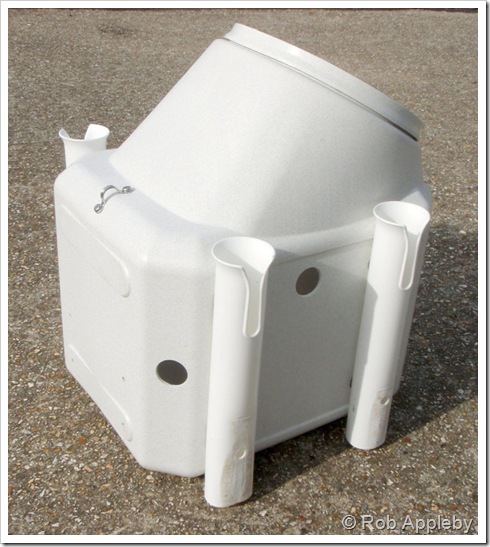 There was a lot of head scratching when deciding how to secure this container to the kayak. It may well contain a considerable amount of water so strong attachment was deemed important. However, I was strongly against screwing/bolting additional fittings to the yak. I eventually settled on a design which will feature later in the article.

The lid had to be secured with a lanyard to prevent inadvertent loss at sea. This was achieved using bungee buttons. One was attached to the the inside on the container to a rod holder bolt, the other to the inside centre of the lid. This allowed easy attachment of a cord lanyard. 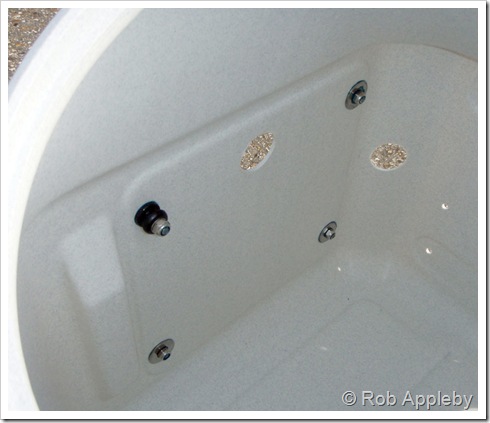 The two large holes visible above are the overflow holes. Through hull fitting were fitted later in the build. These are blanked externally with screw on caps with an o-ring seal to maintain watertight integrity.

The smaller holes visible above are for fitment of a watertight dive box to the rear wall of the container to facilitate fitment of a battery to power the livewell. A kayak carrying handle was added to enable easy carriage of the container. Also visible below the the aerator pump inlet (the black one), again this is blanked for everyday use. 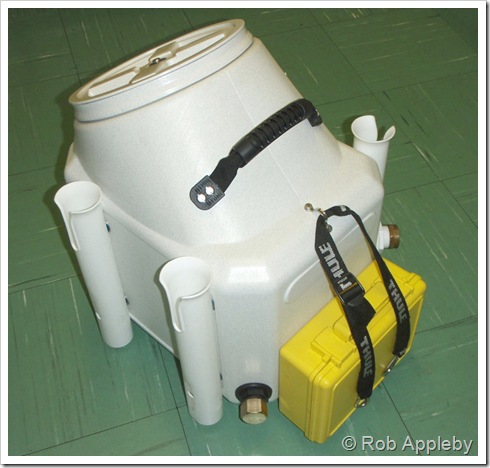 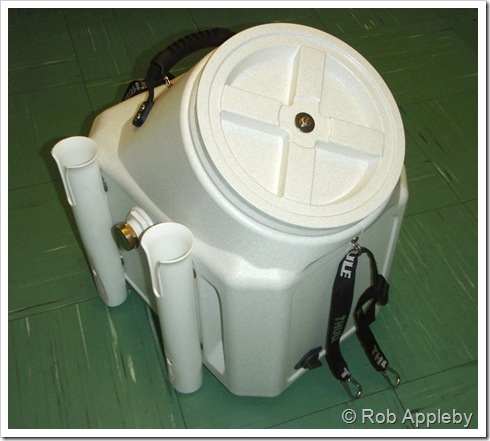 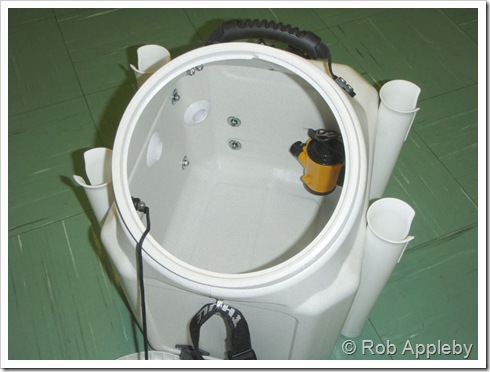 The internal aerator pump is visible in the above photo

I used a Thule roof strap for the securing strap. Stainless carbine hooks were added to each end. The straps are two piece and joined with a heavy duty plastic buckle, similar to what you’ve find on a good quality backpack. This allows the container to be securely fitted to the kayak in seconds. The connection points are existing half round deck fittings located at either corner of the tankwell. 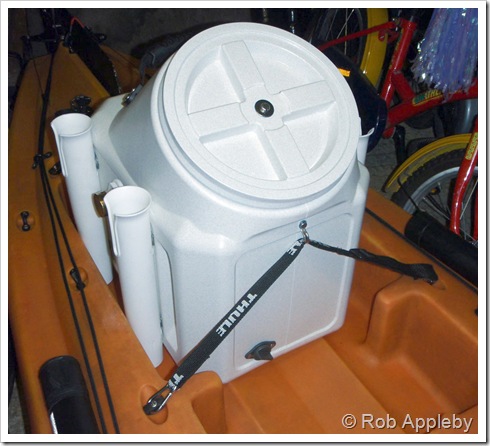 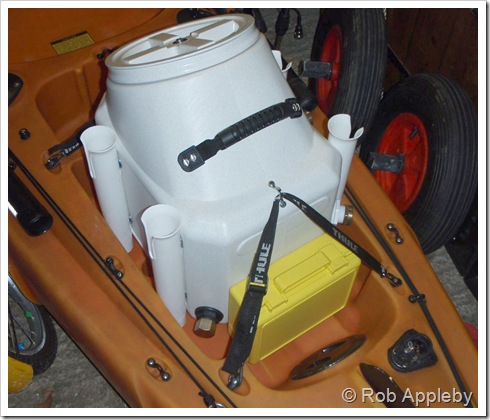 The above photos were taken early in the build as brass blanking caps are visible. As mentioned earlier, these were later change to plastic models with O-ring seals.

The container has a volume of approximately 35 litres. I’d imagine that when sealed it’s also an effective buoyancy aid should you be unfortunate enough to capsize. Should that happen with the lid open the access is so large as to allow very rapid training as the kayak is turned towards the upright.

As it stands, the container pictured above is both lightweight and watertight. It fits very securely to the kayak and can be fitted and removed in seconds. To this point I was very happy in the build. There were several headaches and obstacles to overcome when converting it to a fully functional livewell, though this was eventually achieved and will be covered in Part 2.

To add to this original post I’ve now had the opportunity to use the box afloat. As a dry box, access proved to be incredibly quick and easy, everything that I’d hoped for. 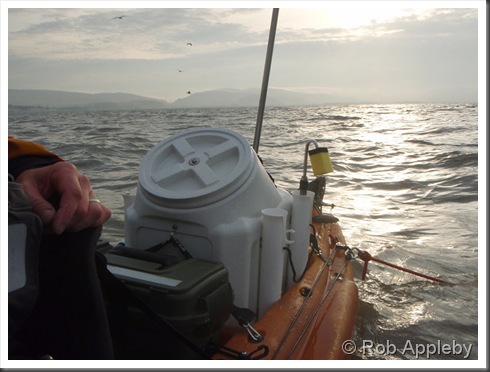 However, I was originally concerned about it being a disorganised mess as it is after all just an empty box. I’d been used to some reasonable organisation when using the Yakmate and a step backwards wasn’t going to be welcome. So was it a disorganised disaster?.. basically, yes.

I couldn’t deal with having to rummage about for gear, especially as I tend to fish at night. I needed to know where my gear was and to be able locate it quickly and easily. The solution was simple enough. Three pieces of exterior grade plywood cut to size and suitably slotted. These can by slid into the box and assembled in seconds. 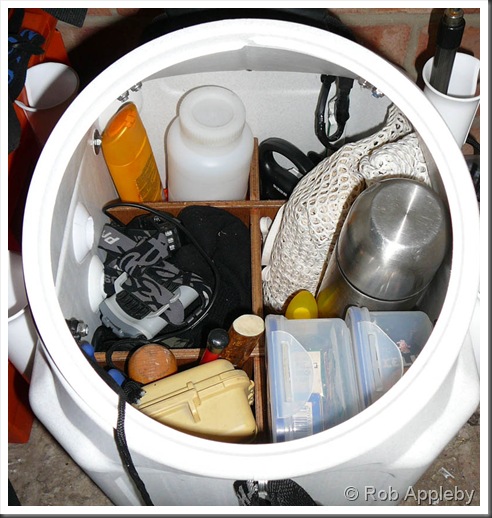 One compartment effectively houses and protects the pump, though I still managed to slip my scales and a couple of snap lights in there. The other compartments allow my gear to be suitably organised, just what I needed!. The dividers can be removed in seconds and I’m left with a ready to go livewell.

Love the look of it, seems to be just what I'm after myself. Thanks for taking the time to put together such a good article.

What a cracking bit of kit, I want one !

verry nice job,
Where can I buy such a pet food container?
You have adresses in the uk or maybe even in the Netherlands?

Stefan,
I bought it from
http://www.rlpetproducts.co.uk/store/cats/brands/vittlesvault/

Hi Stefan,
I ordered another one for myself last week. I'm going to make a pure dry box with no battery box or pipework, etc. No real reason, just something for me to fiddle with I guess.

Excellent alternative to a crate. Enjoying your site and appreciating the hours of editing on your filming too. I note these containers are available through Amazon. Vittles Vault.

Bought my Vittles Vault at PetSmart today instore. Can't wait to piece it together.

Fantastic. I'm going to Petco and buy one of these containers for use now, and for a winter project. Thanks.

Hi
I like the idea but I'm from the East coast of South Africa and the surf we have to launch in is scary. I don't know how I would store this on my ski without having it ripped off if i get knocked off the ski while launching. The skis usually go all the way back to the beach where there is usually a heavy shorebreak.
Any ideas?

I just ordered one. very pricey though as I see they sell for between £30 £55's however though. check this site as they are so far cheapest I found http://www.rlpetproducts.co.uk/

That's where I got mine, they've gone up a lot though. I paid £32 for two when I purchased mine.

they are available strangley right near where I live at http://www.rlpetproducts.co.uk/store/cats/accessories/ for £16.33 + £3.15 p&p Total £20.11 Inclusive of VAT. Just don't tell them what you want them for or else they may cotton on to the idea & charge a lot more. Maks sence. Tony

Hi, I used the smaller box

Hi Rob-Great idea on the "Kittles" storage for the yak. Going to make one soon.
If you ever come across the pond to Florida, I live in "The Villages". and we have a couple of thousand British folks who winter here every year. You might even know some that come here. We are the largest golfing community in the world. I am not far from Crystal River,which is on the gulf coast,about a hour and a half north of Tampa Bay. It is known for its oyster beds and mangroves that make for great flats-type fishing. If you ever get over here you can contact me at:
rjcataniajr@gmail.com
take care,
Russ Catania

Amazing! Its truly remarkable piece of writing, I have got much clear idea regarding from
this article.

Hurrah, that's what I was exploring for, what a stuff!
existing here at this webpage, thanks admin of this web
page.

I every time spent my half an hour to read this web site's content
all the time along with a mug of coffee.

I like the helpful info you supply in your articles. I'll bookmark
your weblog and test once more here regularly.
I am slightly sure I will learn many new stuff proper right here!
Best of luck for the following!