I'd hoped to get out a week earlier, though the forecast hadn't been favourable. As it happened the weather that week had been very good, typical!. With my Christmas holidays disappearing rapidly, I decided that I'd make an overnight trip to fish the muddy waters of the Bristol Channel. I was going to fish the waters off the Blue Anchor, located on the north Somerset coast, a place that had previously been my local area for a few years. However, I'd not fished there in 3-4 years, though the important question was whether or not the winter Cod fishing would be as good as I'd enjoyed in previous years.

It's a 3 hour drive westwards for me, though I'd packed the night before to make life a little easier. After quick coffee at 0600 I was on my way. I'd ordered my bait from Steve at Southwest Tackle in Watchet, the quality from there is always excellent. Despite having fished this venue many dozens of times, I couldn't remember how much bait I used to use on an average 5-6 hour session. I can now say that 1/2lb of lugworm and a couple of packets of frozen squid is about enough, yup, I had unwittingly purchased enough for 2 days. I had actually planned to overnight in the car and fish two tides, so if things had gone to plan this actually would have worked out ok. However, things rarely go to plan!

Since swapping to the Hobie Outback several years ago I've really struggled to store frozen bait like I used to on my old Big Game kayak. Back then I used to use a Flambeau box with ice blocks for this and it worked a treat. As much as I love my Dry Box it leaves no room for a suitable container for frozen bait. I don't like those soft coolbags at all, plus when I have used them I've either had to sit it on, or store it inside the front hatch. It's a far from ideal location, especially in a choppy sea.

I recently put together a 'double Flambeau box' setup that permitted dry storage for tackle, clothing and food as well as seperate dry storage for my frozen bait. Most importantly it fits very nicely into the tankwell area of my 2017 model Hobie Outback. Below is how it looked during the build stage. 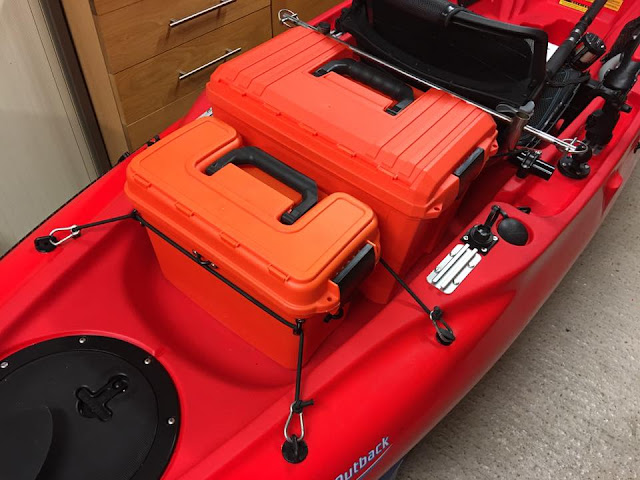 It's very light and secures to existing strong points on the kayak. The boxes are physically joined with spacers, though I'll put a more detailed article up about this setup at a later date. Below is a photo of this combo-box rigged, ready for its maiden voyage. 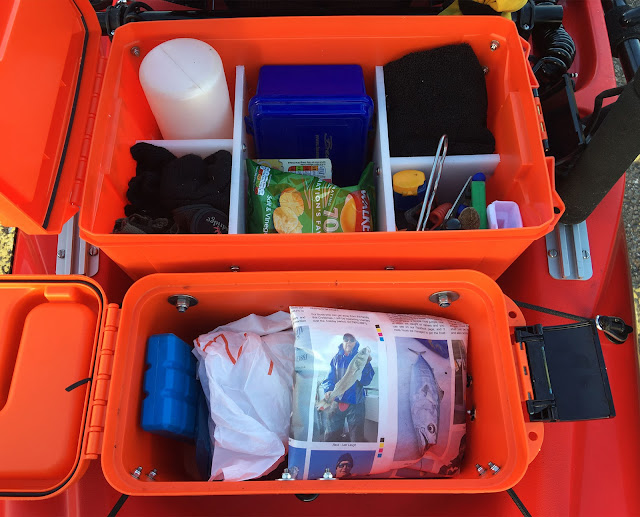 I'm having to use the moulded in rod holders as there's no room to effectively mount rod storage tubes to this new box. Hence I'm effectively limited to two rods for this bait fishing configuration. Hopefully this won't prove too limiting as time progresses.

I'd purchased a rectangular hatch insert and added a divider using a section of nylon chopping board. This is screwed and glued into place, providing two watertight halves, ideally for keeping baits seperate as required. Below is a photo of the modified hatch insert and another of it loaded with bait prior to me launching. I'd previosuly had something very similar, though it had been sold with my old Outback. 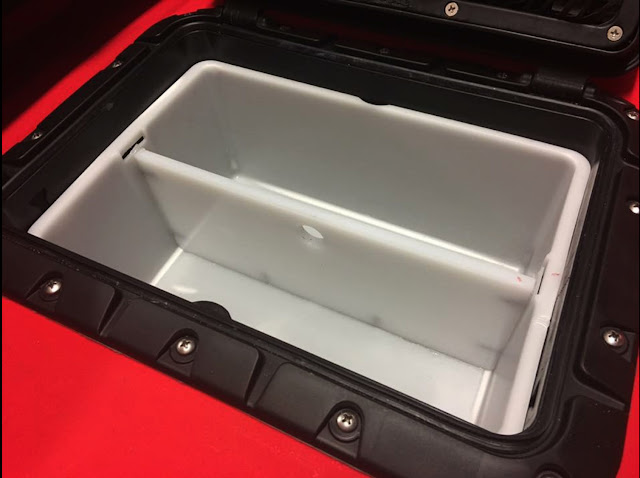 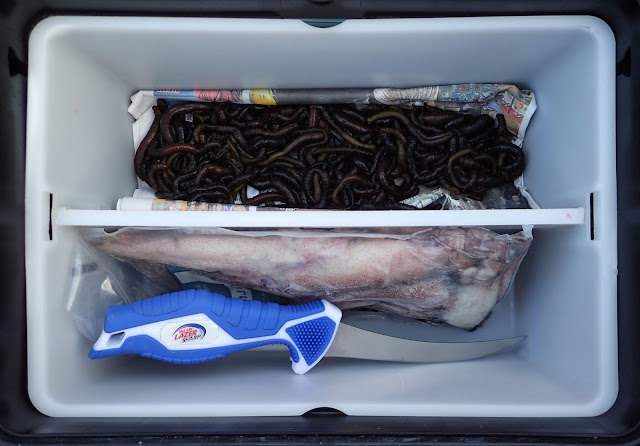 In order to gain an extra 30-40 minutes on the water I decided to drag my kayak over the reef rather than wait for the tide to come over the mud flats. I'd forgotten just what an arduous task it was, though at least I was warm... very warm!

I headed out to my usual Cod fishing mark which put me onto an area of shingle. If you don't know the area well it's highly likely that you'll end up anchoring over mud and this has a dinstict effect on the species that you're likely to catch. Mud will consistently produce Thornback Rays, whereas fishing onto shingle tends to avoid them. The Cod fishing is generally much improved over the shingle, that's certainly my experience of this area over the years. 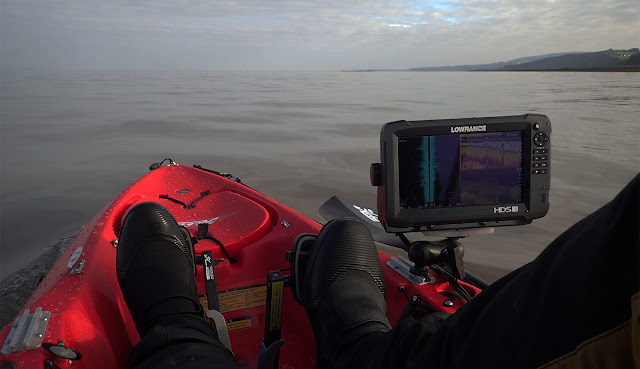 As can be seen in the above photo, the conditions were absolutely perfect!. It was rather cool at 1°C and the temperature never really rose above that throughout the session. After twenty minutes or so I dropped anchor and swung around into the tide. Baits were my standard Cod bait, namely lugworm and squid. I avoid using mackerel as it's way too attractive for the conger eel and rays, that said they will also take the squid, especially the eels. Though it does provide the best chance of hooking into a Cod. My rigs was a 6/0 Pennel using 80lb nylon. The heavy monofilament is fairly resistent to the small Conger that frequent the area. 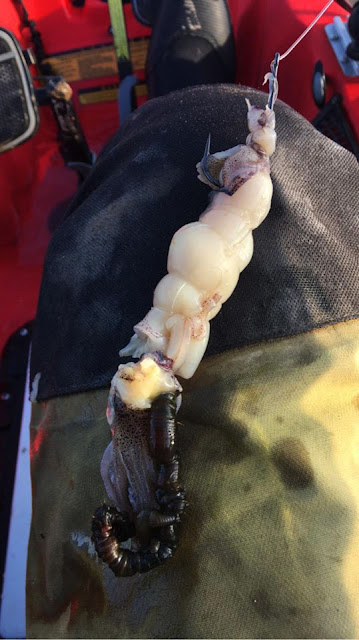 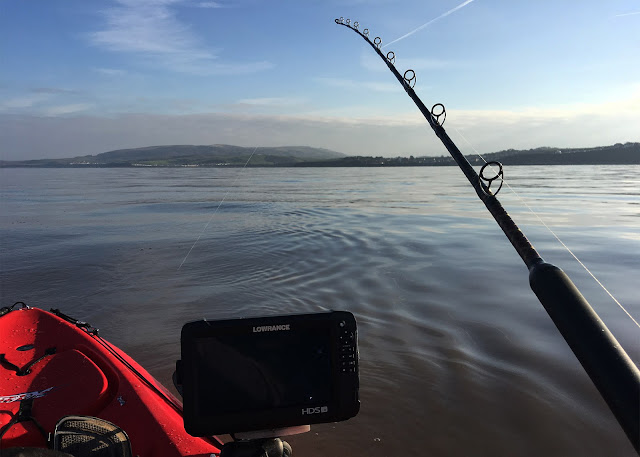 The first half hour was rather quiet, though as the flood tide picked up the fish came onto the feed. The first fish was a strap conger of 6-8lbs,.... as were the next fifteen fish!. They're fun in the tide, though they weren't the target species. I did eventually have a bite that screamed Cod, a steady nod of the rod tip. Like an amateur I grabbed the rod and pulled into it, forgetting to be patient to allow the fish to mouth the bait for a little while. Well if it had indeed been a Cod, I missed it and there were to be no more chances. 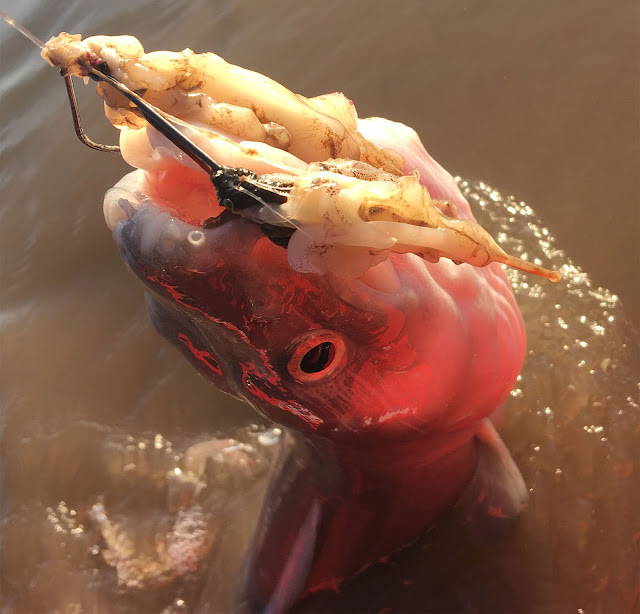 I then hooked into something that felt different, a dogfish perhaps?. I really don't like dogfish, does anyone?. Though much to my surprise a Spotted Ray appeared next to the kayak. I've never caught one in these muddy waters before, the clearer waters further down the Channel can provide many, so this was a first for this mark. 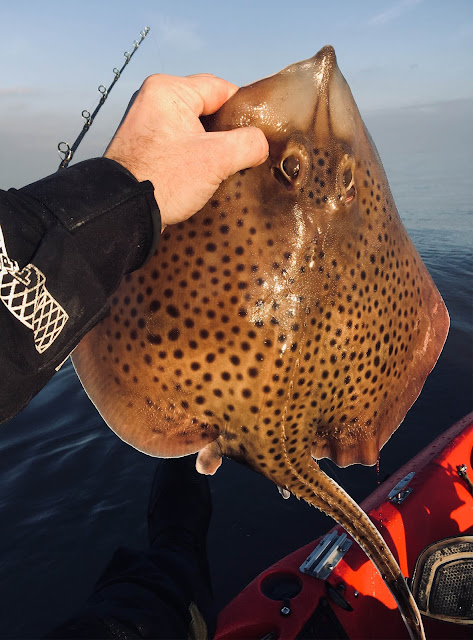 As the tide slackened the fishing died off. I have had the odd big fish over slack water in years gone by, though it wasn't to happen on this session. The Whiting came onto the feed and for 20-30 minutes baits were swiftly removed the the hooks by these ravernous little fish. 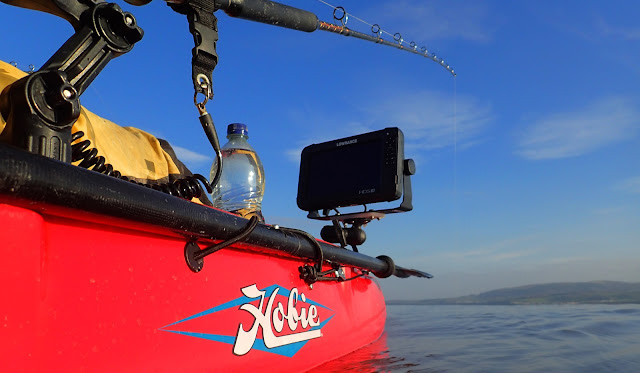 This was my first trip with the new YakAttack Zooka2 rod holders. First impressions are good and I'll report back with a more detailed review in due course. 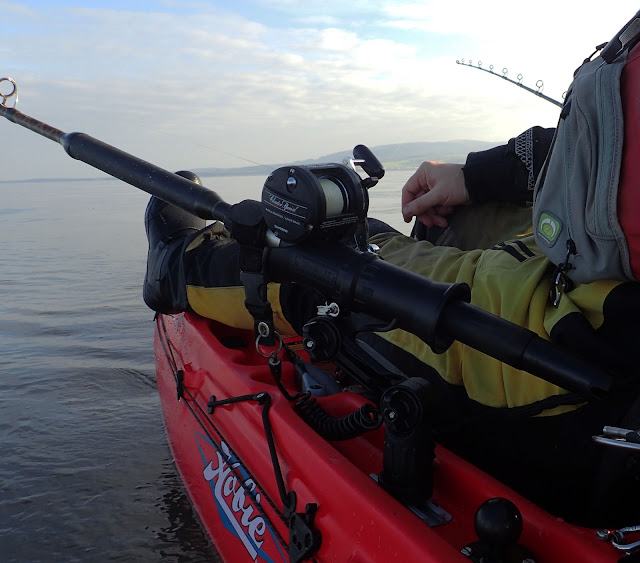 As sun began to set and the tide turned onto the ebb, a brisk wind started blowing from the East. The temperature plummeted and I soon lost the feeling in my feet. As the kayak swung about in the tide it also became ominously dark towards the North West. 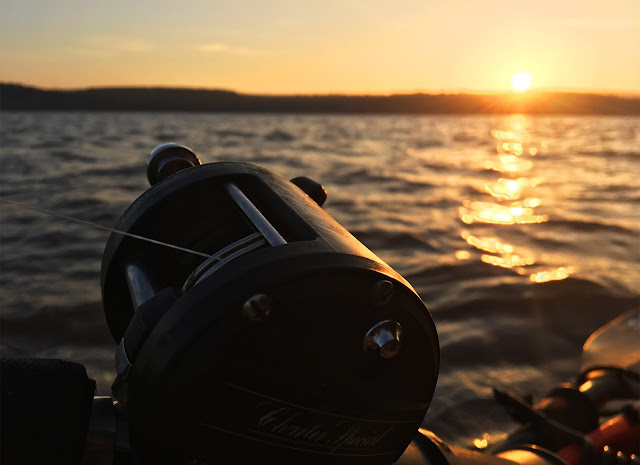 I looked at my Iphone to check the weather. It was showing 60% charge and then the screen went black, it had switched off!. These lithium batteries do not like the cold at all. Without managing to get a weather update I could only go on what was happening around me and it wasn't particularly pleasant nor confidence inspiring. Despite having rigged my anchor light to allow me to fish safely into the dark, I decided to play it safe and headed back to shore.

Ah, the joys off landing back ashore with numb feet, I'd almost forgotten what it felt like!. I had planned to sleep overnight in the car, though it had become apparent during the session that I'd damaged my back whilst dragging the kayak across the reef. I certainly wasn't going to have a comfortable night in the car and it was highly unlikely that I'd be fit enough to fish the next day neither. I had some difficultly in de-rigging and loading the kayak back onto the car, so deciding to call it a day was a wise choice, a fact that was confirmed when I tried to get out of bed the next morning!.

I had a good chance to use my new YakAttack Zooka2's and Eagle Claw filleting knife, though I'll post a review up on both of those items shortly once I've another trip or two under my belt. That said this new filleting knife is a cracker, It's also my go to fish knife in the kitchen.

I'd left at 0600 and arrived back home at 2200, it'd been a long day. I had known in advance on this trip that the Cod were very thin on the ground. The water temperature really needs to fall and for that we need some wintery weather!. Unless the reports improve I'm not in a hurry to repeat this trip, it's a lot of effort. Though it was fun and I caught plenty of fish, no real complaints for my first trip of the year. 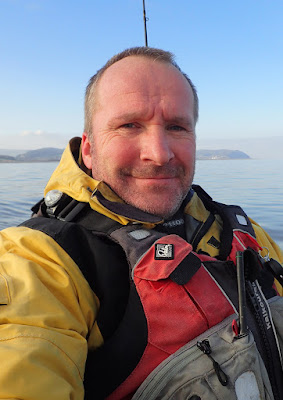