When I purchased my Big Game last year I also purchased a centre hatch from the USA, along with several other items. The kayak was delivered from within the UK and a couple of days post delivery I commenced rigging.

It was immediately obvious that the centre hatch was a fraction too wide, how was this possible?. After some research I became aware of the fact there were TWO hatches designed to fit the Big Game. It appears that at some point in time the kayak mould was changed slightly and the original fitment hatch no longer fitted, this must have been an oversight from Ocean Kayak.
The hatch for this 'tweaked' model was known as the 'Revised Hatch' and one was duly dispatched from KFS in the USA. On arrival it was a disappointment, it was smaller than the original and the quality was poor. It was a hinged lid affair, whereas the original was removable with two toggle latches. There was no seal provided with the hatch so fitment required a good application of sealant (Marine Goop) prior to bolting down, no nuts and bolts were provided with the hatch - not good. 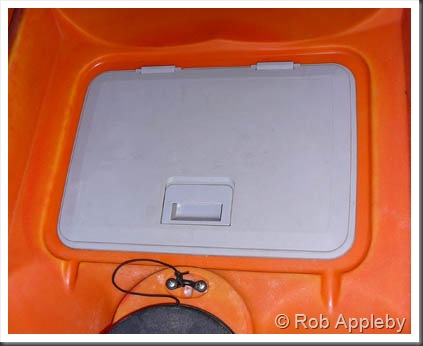 
It didn't take long to realise that this hatch hadn't been designed for the job, in fact it was quite clearly an 'off the shelf' replacement, probably sourced from a marine outlet. The design was quite simply awful, it didn't shut particularly well and as a result wasn't particularly watertight. The seal was recessed and prone to clogging with dirt, as well as being difficult to keep clean. Worst of all was the limited access to the hatch whilst afloat, it could only be opened a fraction which proved to be a total pain. 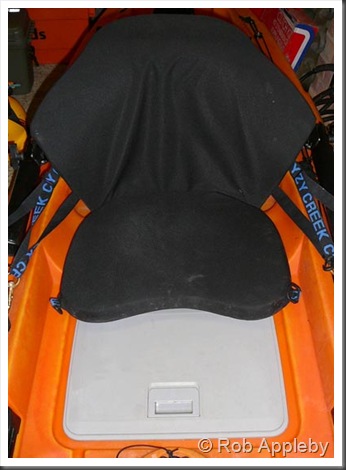 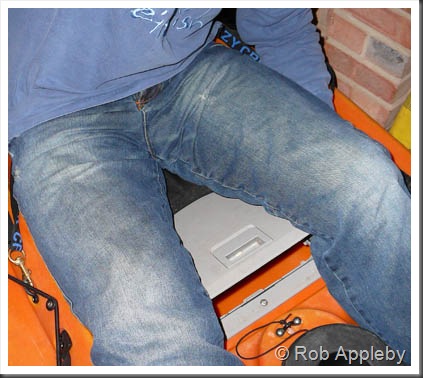 So after a year of enduring this setup, I opted to re-order an original centre hatch (I sold the first one) and make it fit. The original hatch was un-bolted and removed, it was clear at this point that leakage had occurred between the hatch and the yak despite a generous layer of sealant. With the hatch removed work could proceed on fitting the new item. 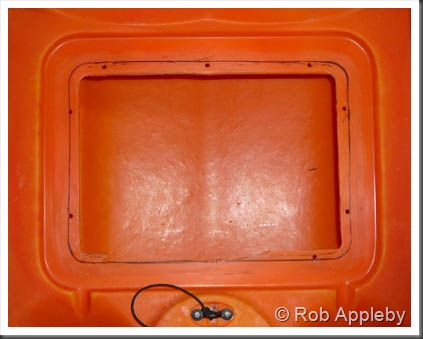 Using the foam seal provided the new hatch dimensions were lifted over to the yak and the excess material was removed. Due to the larger dimensions of the original hatch the bolt holes associated with the 'Revised Hatch' were also removed.


As stated earlier the 'new' hatch didn't quite fit and this required a small amount of material, about 1/8", to removed from each short edge. This was achieved with the used of a circular saw and some wet and dry sandpaper to tidy up the sawn edges. The foam seal remained unchanged and the hatch frame was quickly bolted into place using the supplied stainless fittings. 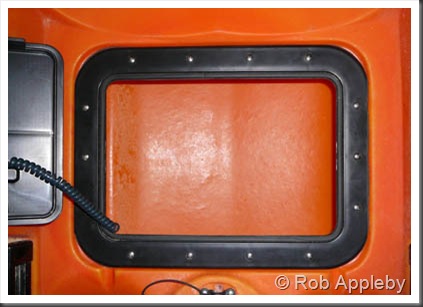 There is one drawback with this hatch design and that is that the hatch itself detaches completely, meaning there's always the chance that the hatch lid could be dropped over the side. That would not only be damned annoying but expensive, as a new centre hatch assembly would have to be purchased!.


A retaining chord was manufactured from and old telephone chord with a circular crimp at each end, with one end being secured to a hatch bolt and the other to the hatch lid, with the aid of a stainless ring through a 3mm hole. 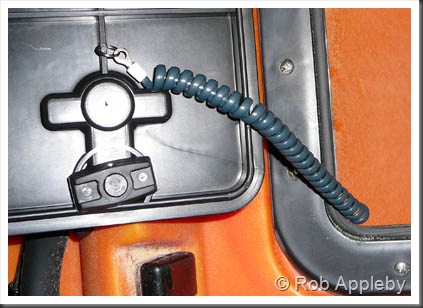 That's the hatch fitted, though I took the opportunity to introduce some internal storage space to make the hatch more usable. A washing bowl was sourced locally, though it turned out a tad large to fit through the hatch opening. No problem, the hatch was removed and the bowl slipped inside the yak. One thing I didn't want was the bowl slipping forwards or aft, nor did I want it fixed in position, hence preventing access to the inners of the yak. I decided to 'fix' the bowl using rubber strip and the type of clips that can be found on a rucksack.

One fitted, the bowl can either be locked directly below the hatch, or un-clipped, allowing the bowl to slide forwards or aft as required. 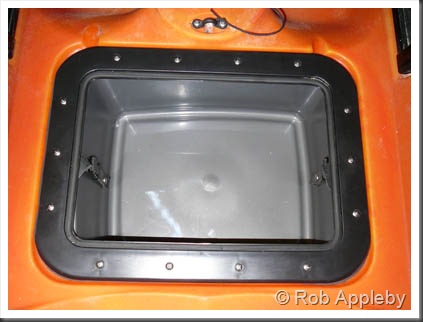 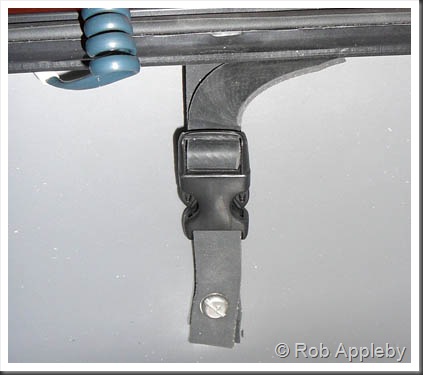 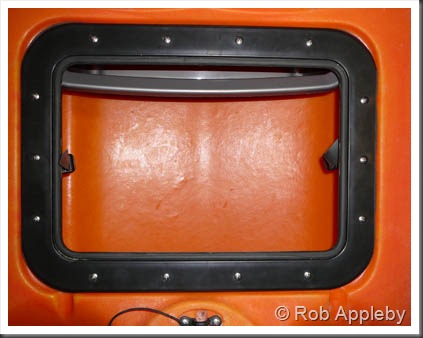 The job took a good couple of hours to complete, though the final result is really pleasing. The original hatch with its poor design and access is now a thing of the past, the new hatch is a far better fit as well as being larger. I've since drilled a 5mm hole in each corner of the base on the bowl to remove any water that may enter the hatch area. 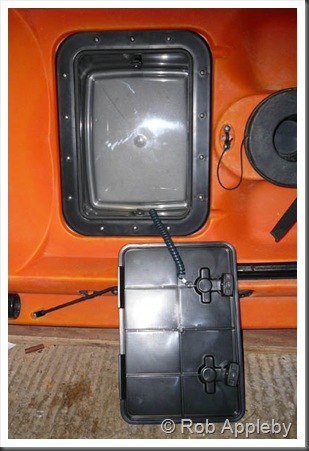 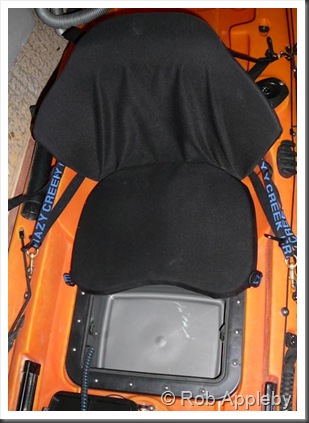 With the addition of the chord to the hatch and the bowl for storage, it should now prove to be a real asset. 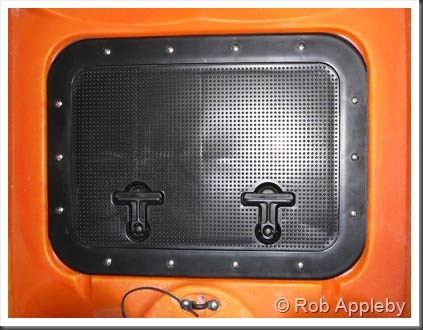 I'm considering fitting a hand-operated bilge pump inside the yak, attached to clips ahead of the bowl, thus allowing the bowl to be slid aft and the bilge pump to be removed and operated if required. Just a thought - watch this space.
Please feel free to comment.
Email ThisBlogThis!Share to TwitterShare to FacebookShare to Pinterest

Ever any thoughts on using this space as a livewell??

I have given it some thought. There's a company in the US that produces the 'Kaya Tank', specifically made to fit the centre hatch of the Big Game, amongst others. It's a great idea, though it means cutting holes into the yak below the water line. That may lead to potential failure in the longer term which doesn't excite me too much.

That all said I would like the option of a livewell tank of some description. I tried one idea and it failed miserably, though it was perhaps a little ambitious. I might come up with something next year. There's an article on the Hook1 website reference making a tankwell from a perfood container, looks pretty good!

I looked all over for a bowl or container like you used in your center hatch any idea where i can find one?

Hi, it's just a washing up bowl, I purchased that one from the 'Range' store.