I've mentioned this dry suit earlier in my blog, though as I've used it for over a year, now is probably a good time to give it a fair review.


It wasn't purchased on a whim, quite the opposite. I've read so many forum articles about various dry suits that people have purchased, and the problems they've encountered and endured as a result. This made me in no rush to part with my hard earned cash.
Like it or not the Americans are way ahead of us in this sport so trawling their many forums was where I found some inspiration and good advice. Bottom line seemed to be:
There were a couple of potential contenders, though the Kokatat range stood out above the rest. I did have a limited budget which made the choice somewhat easier and I eventually settled on the 'Super Nova Paddle Suit'. 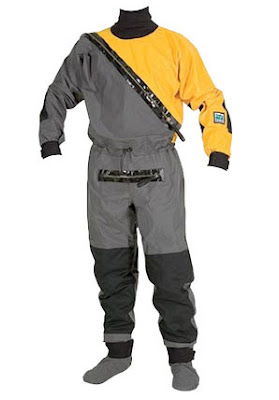 I had it imported from KFS in the United States which resulted in me being stung for some VAT and import duties, though it still worked out at a reasonable £250. Having spoken to the helpful folk at KFS I ordered the next size up in order to accommodate various layers of clothing as required, and to ensure it didn't end up a little too tight in general use.

The suit duly arrived and it was given a test run. I'd purchased some thermal gear including a pair of snowboarding pants. Once fully layered up the suit was donned and it proved very easy slip into. The front zipper making it especially simple, and pushing through the neoprene neck seal was straightforward. There's a Velcro tab so the neck seal can be tightened to suit once on. 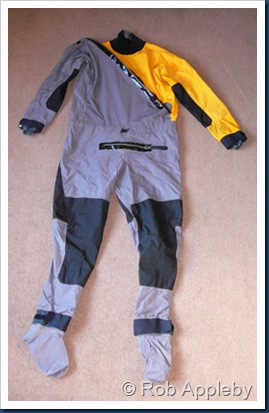 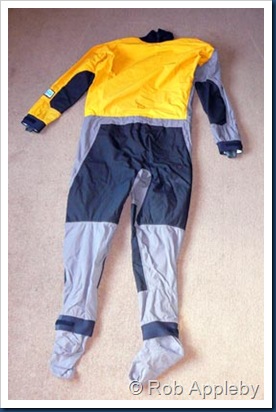 The wrist seals are latex and have proved comfortable, requiring no trimming prior to fit, a year down the line they've not loosened at all. Again, there's Velcro on the wrists so all can be tightened up once the suit is on. A drawing is fitted around the waist allowing the suit to be pulled in once you've expelled the air making is far less baggy than one without. 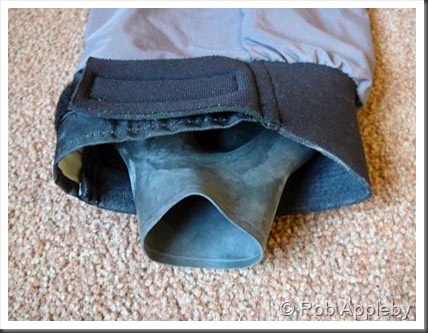 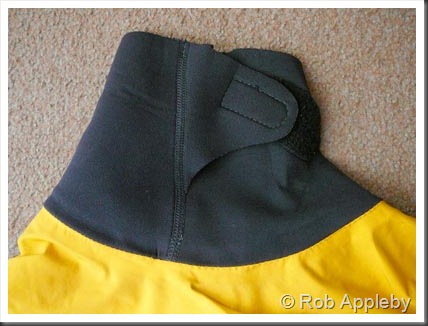 A relief zip is fitted which in my eyes is an absolute must, fitting one as an aftermarket conversion will cost a drysuit owner upwards of £60, not cheap!! 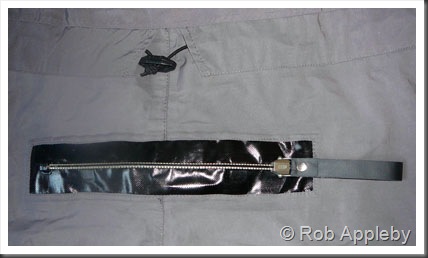 Here in England the summers are short and the winters seem never ending. I've spoken to people who've purchased dry suit with latex ankle seals (no socks) and they all tend to agree that they do not suit a cold climate!. The Kokatat has sewn in dry socks and they are extremely effective!!, I've worn anything up to 3 pairs of thick socks on at any one time under the suit, with wetsuit boots being over the dry socks. Quite simply it's brilliant and my feet rarely begin to cool off even when the temperature drops below freezing, they're certainly never cold and for me that's a big thing!. 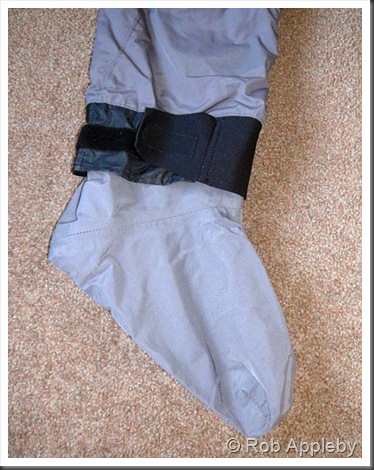 How does it perform in the water?, well as my kayak is a Prowler Big Game its stability means I've yet to capsize whilst actually fishing or paddling, though it has been tested for a few hours whilst doing capsize/recovery drills in my local swimming pool. No leaks whatsoever and it's comfortable, even submerging in the suit (only achievable without my PFD) resulted in a tablespoon or two of water penetrating the neck seal. When wearing a PFD my shoulders are well above the water so water penetration into the neck seal is rather unlikely.

The material is proving to be very hard wearing and it has additional layering around the elbows, seat and knees where the most abuse is to be expected. After a year consisting of 70+ trips it still looks like new.

The manufacturers state that the Tropos fabric is also breathable so your perspiration will go out through the membrane even though liquid water won't come in. I don't sweat inside the suit, though I generally have a couple of layers on at any time which will tend to wick any sweat away from the body. It doesn't soak with condensation internally so it seems to live up to the hype.

So, after a year how do I rate it?.. Well is extremely comfortable being easy to slip into or remove. The front zip makes life a pleasure, I’ve tried rear entry zips and they are difficult at the best of times. The neoprene neck seal is preferable to a latex item, especially when spending several hours afloat. It’s sufficiently watertight to keep water intake to a bare minimum when capsizing. The high risk area for water ingress are the wrist seals, though being latex these are very effective. It'll eventually be replaced with another or something very similar when I do eventually manage to wear it out, and that wont be for a long time.

Hi Rob !
My name is Frode Reppe, and I live on and island on the midwest coast of Norway. The main island is surrounded by 5400 smaller islands and islettes, and the area is fantastic for cayakking and fishing. My wife and I thereby bought ourselves two cayakes, and suddenly we discovered that we needed drysuits also. Unfortunately they are very expencive in Norway, and I wonder if you know a deasant dealer in the UK from where we can buy them?

Hi Frode
the Kokotat can be purchased in the UK from http://www.knoydart.co.uk/

It's worth giving them a call as they recently had the Kokotat at a sale price, well below their listed price.

Another good outlet is http://www.wetsuitoutlet.co.uk/

Please feel free to email me some photos of kayak fishing action from Norway!

Hi Rob !
Thank you so much for your help. If you want any photos from Kayak fishing in Norway, you have to come and make them yourself I think :) Kayaking in areas where you can catch a deasent fish is not common in Norway. These areas are mainly north of Aalesund. My wife and I are amongst the first in our area to buy Kayaks, and we are certainly not going to fish from them, at least not in the beginning. We have a boat for such an activity :)We live 5 m from the sea in a narrow sound, in an area "created" for Kayaking, and we have maybe seen 10 kayakers in 7 years! If you have a look at the google map of Norway and Froya, you will also find a big nature reserve in the N/NE. This area is called Froan. Froan is the largest area at sea in Norway guarded by the Ramsar convention. The area is overcrovded with islettes and islands, and the wildlife is astonishing, and our plan is to paddle out there one day. (The oceaneagle broght to the UK and Irland comes from this area)

You can have a look on our homepage. Bad english in there, but nevertheless http://familienreppe.piczo.com

Norway has always been somewhere I've fancied going, not just for the fishing, but for the amazing scenery.

Thanks for the link to your website, it's confirmed that a visit to Norway is a must, preferably with the kayak strapped to the roof! :)

Absolutely stunning, thanks for sharing.