I can hardly believe it, it's been three weeks since I was last out fishing!. It was time to make amends so a trip down to Somerset to fish the Bristol Channel was hastily organised. There had been a couple of encouraging catch reports during the last months with strap conger and a few codling being caught. The other option was to fish locally in the Solent and fill the freezer with pouting... so, Bristol Channel here I come.

The weather forecast was just about perfect, a light southerly breeze that would provide near millpond conditions. Having not fished the area before, the first session was to be a day session, fishing into the dark if required. The tide was around nine metres!, so I didn't know quite was to expect with regards to tidal flow and the ability to anchor comfortably. My local yak fishing partner joined me for the day.


I have a bundle of conger rigs ready to go at any time, though they're 50-80lb wire with heavy 6/0-8/0 forged hooks. I decided to make a somewhat lighter rig using 30lb wire with a 6/0 Kamazan uptide hook. These hooks are extremely sharp and would hook and handle small conger with ease.

The near three hour journey went smoothly and we were soon by the beach rigging up. 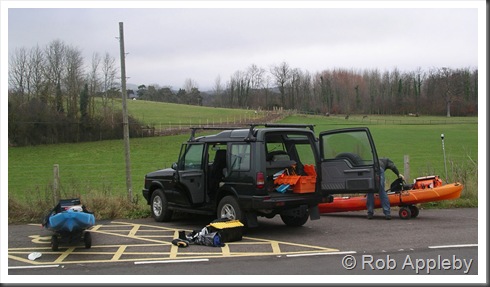 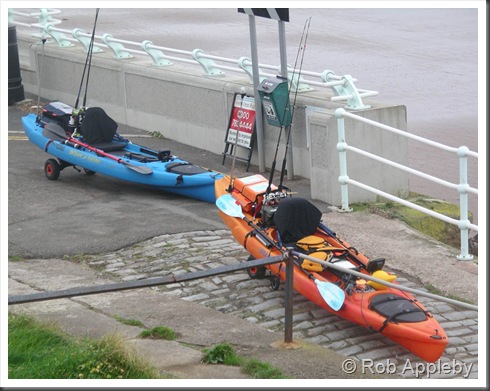 The mark we were fishing was a reef very close inshore, literally within a couple of hundred metres of the shore, and the paddle to the mark was a short one. I'd taken a selection of bait, mackerel, crab and squid. A full side of mackerel is very versatile and can catch a variety of species such as conger, bass, cod, rays, etc. The wires traces were used at all times because of the chance of a conger.

We fished the first 3 hours of the flood and into the ebb. The fish seemed to come onto the feed within half and hour of being there, with the first fish being a strap conger which was dropped right at the side of the yak. However, I didn't have to wait too long for the next one, only small but a good start to the session. 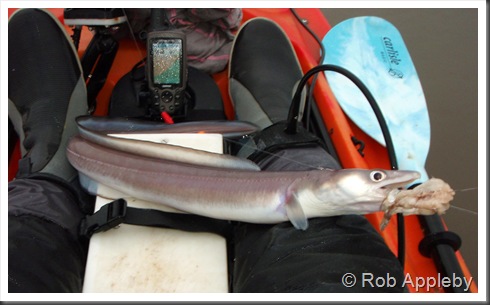 The tide was running quite hard though the water depth, initially around 6 metres, meant lighter weights of around 4oz were sufficient to hold bottom. The mackerel bait was getting constant attention and it wasn't long before I hooked into another conger, and this was definitely a better fish. After a few minutes it was alongside and in the yak for a quick photo before removing the hook and returning it. 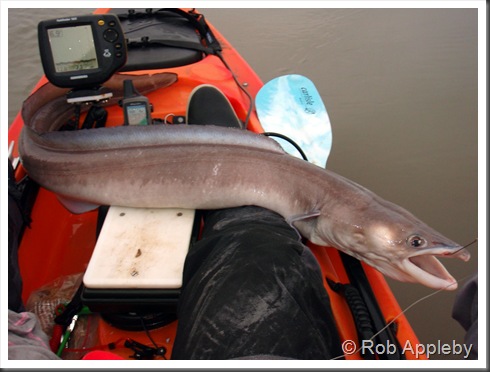 The T-bar disgorger was earning its keep, keeping my fingers well clear of those teeth!. I varied the baits on the other rod, using crab and squid, though it was getting very little interest.

A gentle tapping showed that a conger was messing with the mackerel and it wasn't long before yet another conger was stripping line from the reel. I try to fish as light as possible and it was cracking fun with my 6lb rod and small ABU reel. This fish was fighting hard and it was quite some time before it made an appearance. A few dives were made for the bottom though it finally came close enough for me to grab the leader. These fish have a lot of power and can dive hard without warning so it's wise to have a rag wrapped around your hand whilst handling the line. 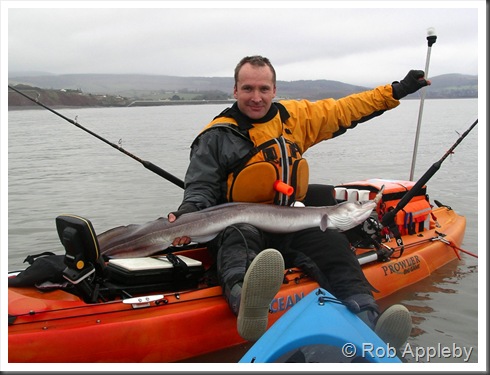 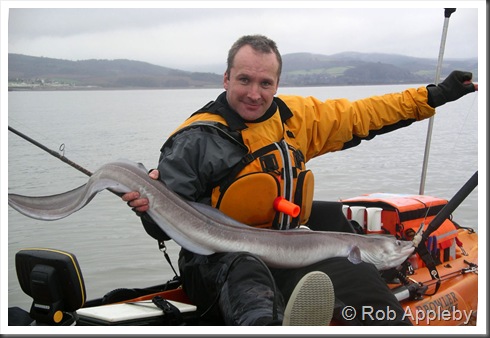 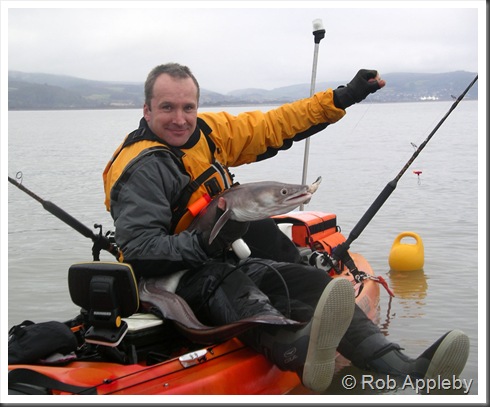 The eel came aboard and a couple of photos were taken before being returned to the water, the hook being removed at the side of the yak. 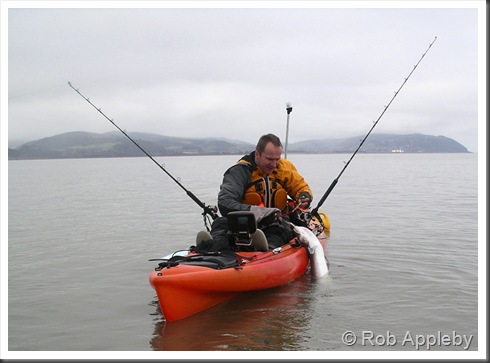 I almost paid the penalty for switching to a lighter conger rig when one particular fish fought very hard in the tide and I probably applied a little too much leverage at times. The fish wasn't lost, though as can be seen from the photo below it was a little too close!. Also, the cost of only using one swivel whereas I normally use two - line twist! 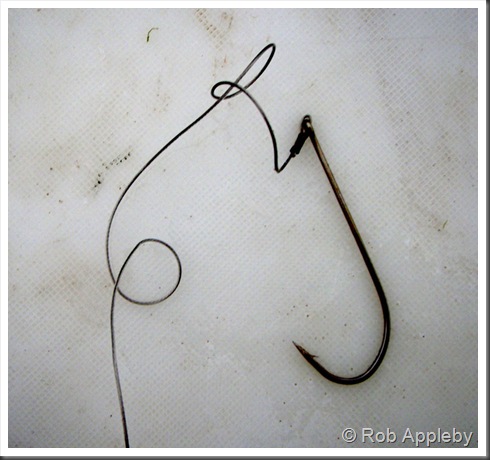 A few more smaller conger were taken with a dogfish making an appearance, thankfully just the one. There was cracking THUMP, THUMP, THUMP on the squid,crab combo, though I missed the bite and it didn't come back for a second look. Possibly a cod or a bass, i'll never know! 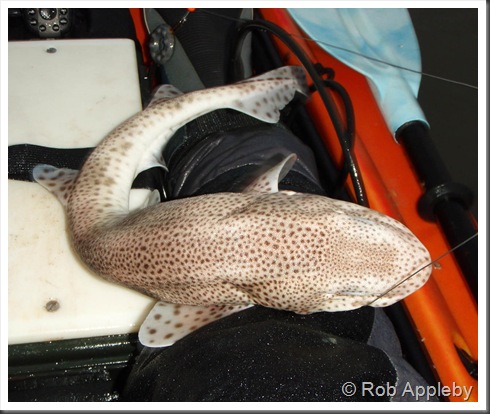 My yakking partner was fishing slightly further out was suffered from a slow start to the session, though he soon found some decent sized conger with a few dogfish thrown in for good measure.

We fished into the dark as the tide ebbed and the fishing action soon tailed off. There was however some shouts of joy from the other yak so I released my anchor and paddled over. At first I thought I could see the head of a large conger, but no, it was a big cod! 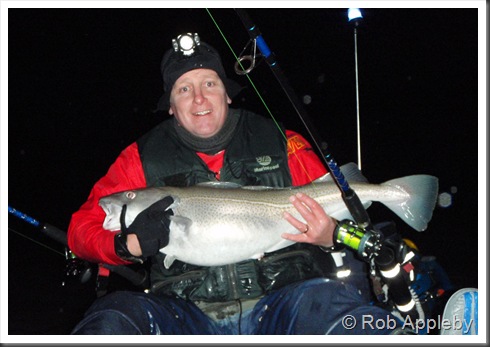 We weighed it back at the car a couple of hours later and it was bang on 16lb, a cracking fish by any standards! 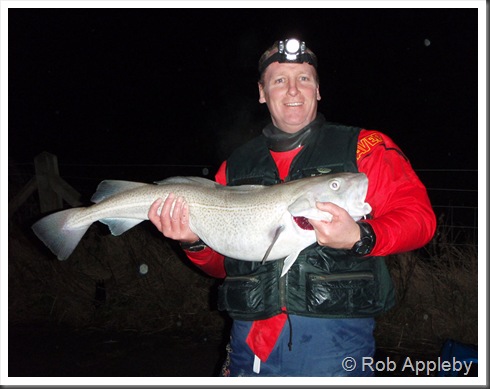 After six hours of fishing we called it a day and headed home, but what a cracking session!