Esthwaite Water – A weekend in the Lake District

I’d never fished the Esthwaite Grand Slam kayak competition before, though I finally got around to correcting that this weekend. Esthwaite Water is one of the smaller and lesser known lakes in the Lake District national park in northern England. It is situated between the much larger lakes of Windermere and Coniston Water.

I picked up a couple of friends en-route before heading north on a journey that took a good six hours, it was quite a slog!. I wasn’t in the best of moods prior to setting off after having being literally drenched in a monsoon-like downpour as I was trying to load the car.

The location was utterly superb, a rough camping ground at the edge of the lake with the luxury of very basic amenities (a toilet) a couple of minutes walk away. Though that view!,… brilliant.

We arrived on the Friday night and it was a case of pitch the tent and head down to the local pub in Hawkshead for some light refreshments. Apart from live music emanating from a couple of bars, it was quiet, typical for such seasonal villages. After a couple of pints we headed back, I barely remember getting into my sleeping bag.

I certainly slept well, it’s been a while since I’ve been under canvas and I enjoyed it, slept like a log in fact. Not strictly true, nature called at around 2am so I popped outside to water the plants. It was a full moon and surprisingly bright, with clear views across the lake, it was so tempting just to launch!

It was a leisurely start in the morning with the competition not due to start til 10am. Plenty of  time to grab some food, rig the yaks and chat to the multitude of anglers who had made varying journeys to fish Esthwaite Water. 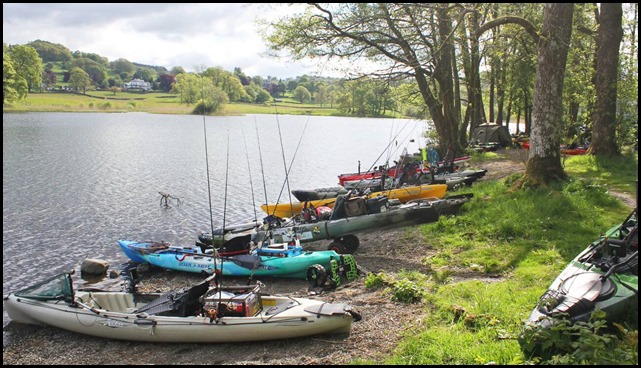 Target species were pike, trout and perch, fish being photographed/measured and returned with the highest overall length being the winner (1 fish of each species). With the sound of a horn at 10am we were off!. It was sunny, the scenery stunning, you couldn’t have really asked for too much more… fish perhaps!

It was also an excellent opportunity to test out the Structure Scan on the Lowrance HDS7, I was hoping that the new mount would produce some very useable images and that it’d really come into its own over the weekend. I’ll write up an article shortly on how I made the retractable mount for the large LSS2 transducer, but here’s a photo for the moment. 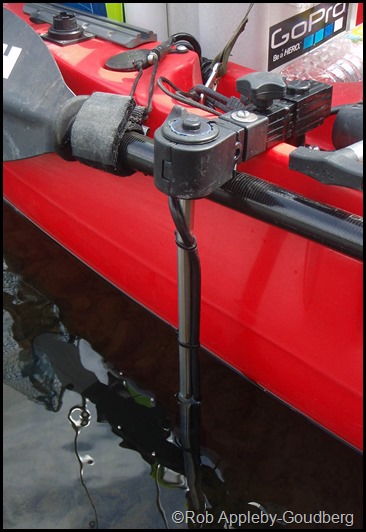 Anyway, it’s a fairly large piece of water, though easily circumnavigated in a couple of hours. The depth varied considerably offering shallows, deeps, interesting drop offs, reed beds, etc… lots to choose from!. I set of trolling, heading towards to the top of the lake hoping to find some pike before the water was disturbed by the other anglers. I fished along the drop offs in 2-4m of water, rod in hand, hoping for a big hit. That didn’t materialise, though I wasn’t exactly bothered as I found myself just enjoying the scenery and wildlife, geese, divers, swallows and house martins, it was lovely out there. 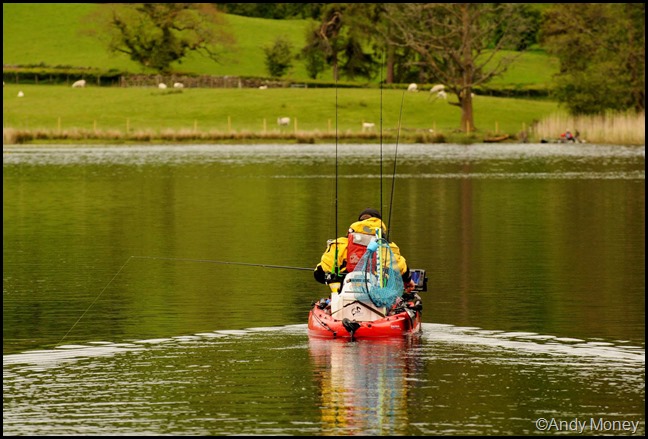 I positioned myself very close to the shore in a quiet bay, casting into an area of deep water, retrieving a twin paddle tail lure back up the drop off. The lure was hit hard twice, though I failed to hook up. There was no other activity so I moved on, targeting Pike for the remainder of the morning. The inactivity continued and I just couldn’t connect with a Pike, it was starting to get a little frustrating as the hours ticked by. 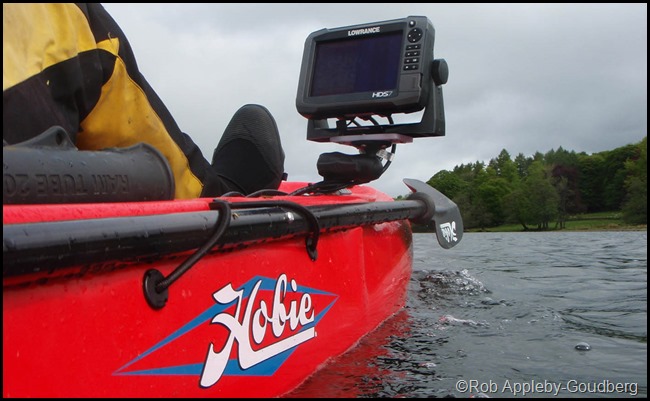 I reluctantly switched over to a dropshot rig baited with a small worm. I located a few small fish in some deeper water of around 10m and targeted them. On the second drift I hooked up with a lively fish which I assumed to be a small Perch. Wrong!, it was a brown trout, a new species for me from the kayak.

It wasn’t large at only 37cm, though it was my first fish of the day and it certainly boosted my morale.

We’d heard before the launch that the lake had been stocked a day or two earlier with 500lb of trout. It was expected that this may have affected the pike fishing and that the trout at least should prove easy to catch. One species down, two left to go!. 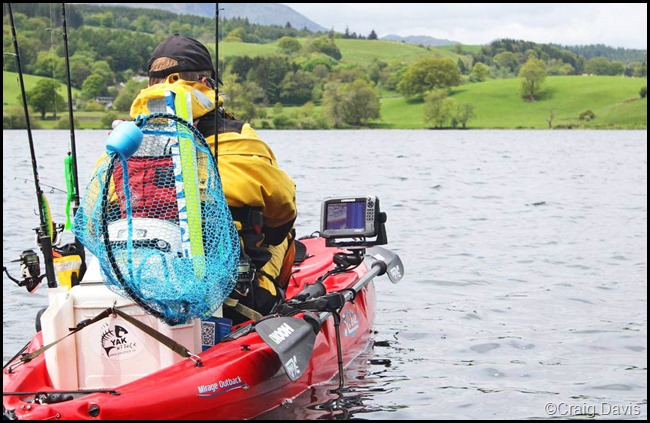 The fishing then went quiet, very quiet in fact!. I moved around a lot, looking for fish and trying various methods. I spent quite some time trying for a Perch without so much as a bite. It was becoming frustrating and the afternoon was fading fast.

At one end of the lake there was a couple of large shoals swimming around in around 5-8m of water. The general consensus is that they were likely to have been the trout released earlier that had yet to venture off into the lake. They weren’t interested in any offerings. It was difficult!

Below is a screenshot off my Lowrance HDS7 taken as a shoal of fish passed beneath and to the left of the kayak. Its interesting to see how a shoal appears on the broadband sonar (centre) as opposed to the Structure Scan (sidescan) on the right. Note the sonar shadows on the Structure Scan created by the shoaling fish. The mapping on the left hand sight was downloaded free of charge from the Insight Genesis website. 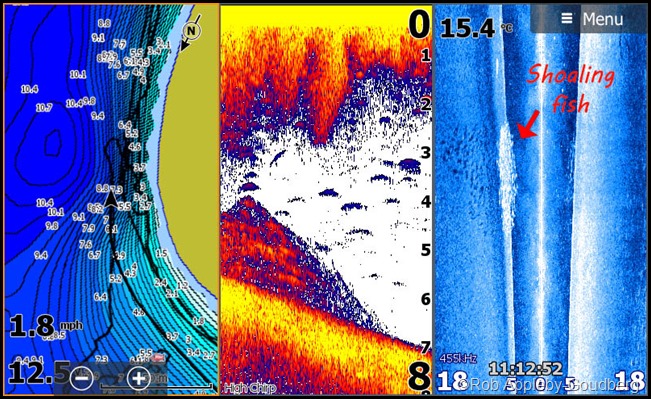 Below is another shot taken using the split screen format showing broadband and down imaging sonar side by side. The down imaging has far better resolution and the shoaling fish are more easily discerned. That said, if you’re looking for individual fish the broadband is far better suited to the task. I much prefer to use the down imaging for identifying structure. 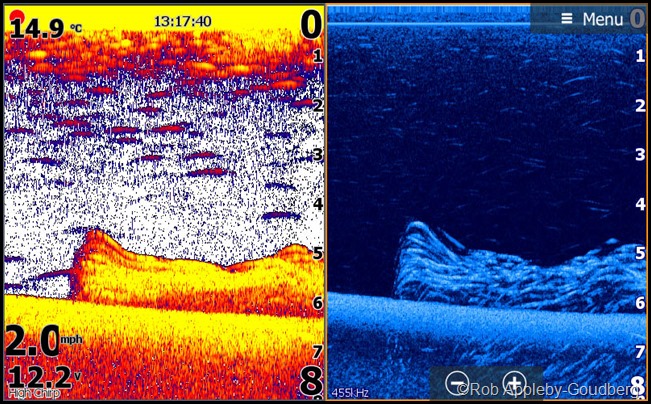 I fished til around 8pm I think, I’d grown rather frustrated and rather tired, the long journey from the previous day was catching up with me. The competition was due to commence at first light the following morning, though I decided that I’d fish when I woke up, there was to be no alarm clocks.

Sure, I could have got up at the crack of dawn, that would have been the logical thing to do, it would have really increased my chances of finding some decent fish. Though I had to remember that I had a six hour drive home at the end of the day. My passengers had the luxury of falling asleep if required, I did not.

I woke to the sound of rain battering the tent, so I lay there for quite a long time. Eventually it eased so I ventured out, rigged the kayak and launched. The forecast had been for gusting winds, though it was actually pretty good out there. I trolled a lure the long way around to the spot where I’d had two hard pike hits the day before. The trolling produced nothing whatsoever so I put my hope in some spinning and started to work the target area. Nothing, not even a tap. I tried a couple of different lures and covered the whole bay quite methodically. Another kayak angler was sat on the outer edge.

I eventually moved on and trolled and spun my way around the lake. It turned out when chatting to him later that after I moved on he moved in and had a pike of 80cm… typical! 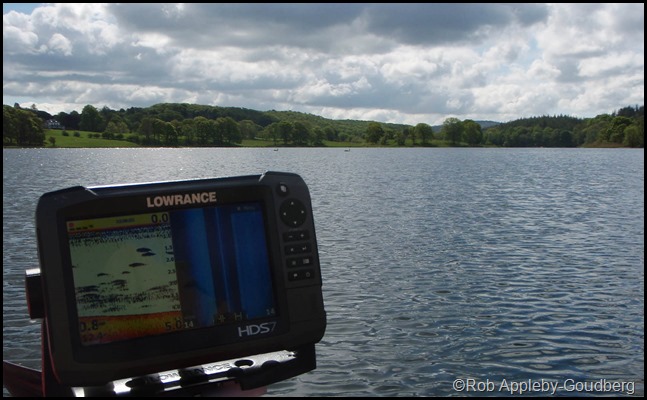 I eventually relented and swapped over to my dropshot rig, threading a thin work onto the size 12 hook. I located a shoal of fish and dropped straight into it. The bait was hit immediately, though no hook up. After a couple of drifts into ever deepening water I picked up two more trout, though not what I was after. That said, catching fish was enough to boost morale no end!

After a couple more drifts I was into another fish, a perch perhaps?!. It was neither a trout not a perch, rather surprisingly it was the smallest pike that I’ve ever caught!. It was only 40cm!, though it was a pike, which allowed me to concentrate my efforts in finding the highly elusive perch.

I took a break in a moment of decent weather and pulled the yak up onto the shore to stretch my legs and enjoy a spot of food. 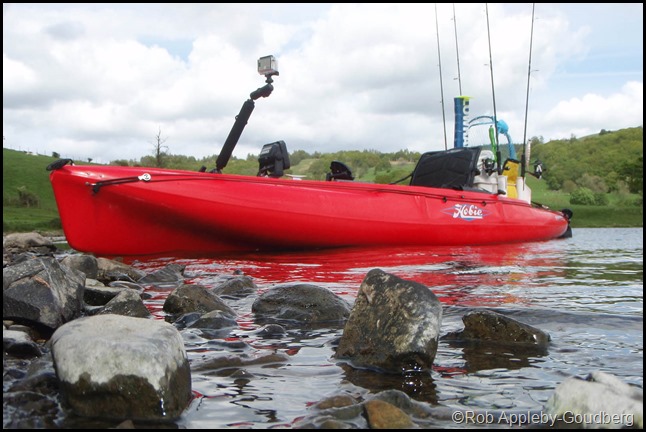 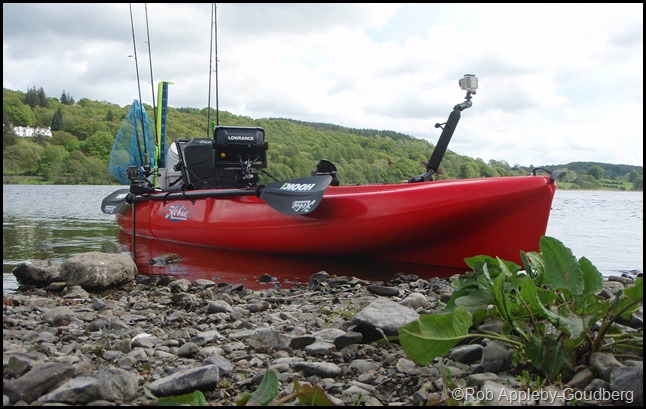 I trolled my way back down the lake to fish an area that I’d heard had produced numerous perch a day earlier. I have to admit, I was really enjoying the location and scenery, definitely somewhere that I’d return to again, perhaps with the kids for a fish and camp week.

I was soon back into the zone and fishing hard for perch. I located two shoals and had two hard rattles at my worm, though frustratingly I couldn’t hook up. That said I was given the opportunity to have a good play with the Structure Scan. I was a novelty not to see fish on the standard sonar, the screen was clear.. though I could watch shoaling and individual fishing moving around either side of the kayak up to 30m away on the Structure Scan. I’m really liking the setup and the quality of the images and the sensitivity of the HDS7 is proving to be superb.

Below is a good example of what I’m talking about. The sonar was clear, though the Structure Scan was showing a shoal of fish off to the right with a large fish following, most likely a predator. Again, note the shadows created by fish clear of the bottom. The shadow also helps the user judge the height of the fish within the water column.

Those holes off to the left are rather bizarre!. Some of them are perhaps 2m across, I’ve no idea what created them. There’s some light weed to the top left, I find this imagery quite fascinating. 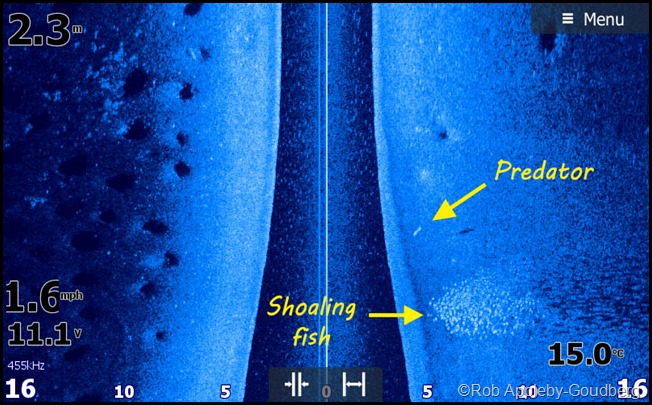 I persevered almost to the end, though despite another rattle at the worm I decided to call it a day and to get my tent dismantled and the car packed ready for the return journey.

It was really enjoyable competition, though the fishing was most definitely pretty tough. The whole event was well organised and well sponsored. I’d certainly recommend it to anymore who fancies a weekend away in 2016. Mike Redding took first prize in the shape on a Lowrance Elite 5 CHIRP, well done that man! 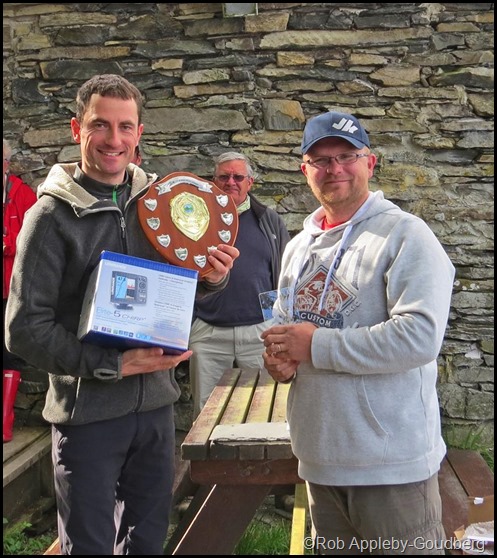 Perhaps there are those who would say my blog used to be all the Big Game and Garmin, etc... And quite frankly it was!

That's because that's what I used back then, now I use an Outback, an Adventure Island and Lowrance equipment, so guess what???, that's what you'll read about now!.

Last I checked, bloggers are allowed to write about whatever they want. It's their blog, after all.

Anyhow, I still thoroughly enjoy your posts. Thanks for sharing.

Anonymous said...
This comment has been removed by a blog administrator.
July 30, 2015