Well what to do ?, the family is currently enjoying a vacation in the Dutch Antilles, unfortunately some of us have to work. However, last weekend presented an opportunity for a few days away and I wasn’t going to let it go by.

Last year I’d fished the reef at Tywyn in the hope of a Tope, only to catch everything else but a Tope!. I’d tried to get there the previous two weekends, though a poor weather forecast kept dashing my plans for a few days fishing. However, it looked good for the weekend just gone, so I promptly packed my gear and headed off on the 250 mile trip to Tywyn. The last hour or so of this trip is very scenic, though the winding roads makes the going quite slow.

I arrived late on Friday and considered the possibility of an evening session. Though I decided to make camp and settle down with a couple of drinks in front of the camp fire. 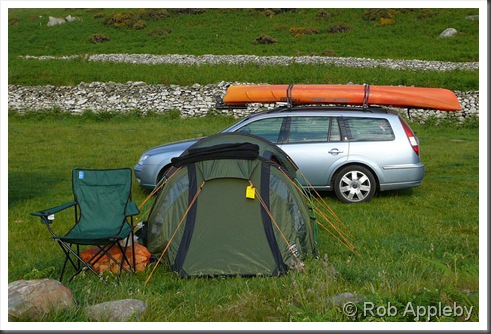 The sunsets here are generally stunning and the first night proved to be no exception, a great way to relax after a long drive. 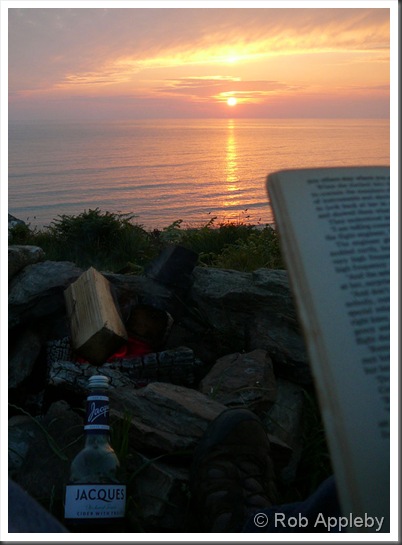 This time last year there were sufficient mackerel to catch a steady supply of bait, on that assumption I grabbed two packets of frozen Ammo mackerel and headed off to rig and launch. The surf was light and the weather fantastic. I paddled the mile or so to my mark for the day, dropped anchor and lines were soon in the water. 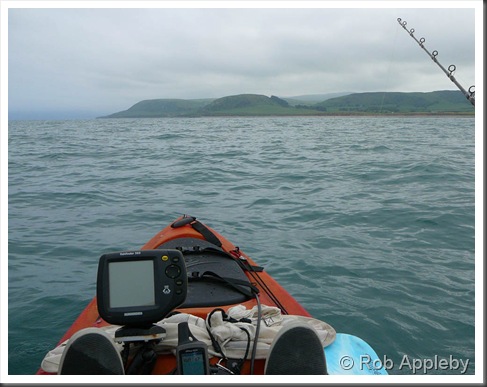 I didn’t have to wait too long for bites and there were soon several bullhuss and dogfish coming to the kayak. However, the mackerel were very noticeable in their absence.

After an hour or so I had my first tope run of the day, an absolute screamer, though it was over almost as quick as it had begun. I was getting through my bait very quickly and I was forced to use fillets of mackerel by the time I’d opened my second packet of bait.

This attracted yet more dogfish and small bullhuss. 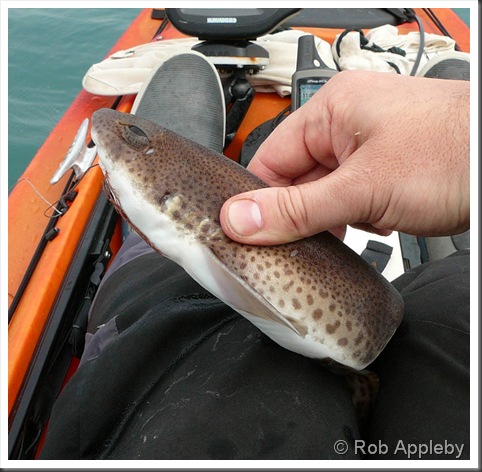 Some of the bullhuss were a good size, the odd one pushing double figures. 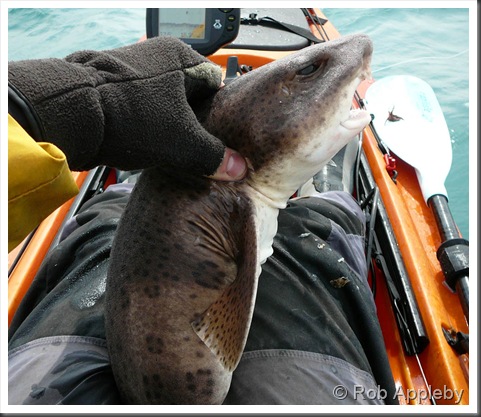 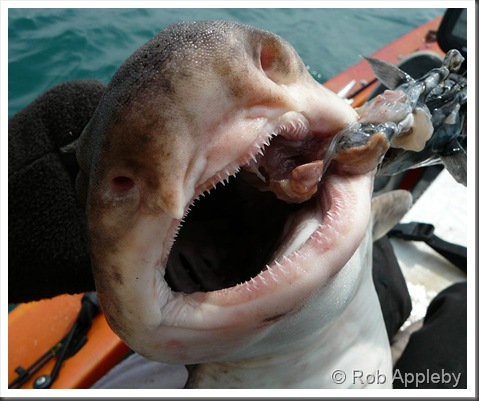 I had another two tope runs, the last one I managed to hook up to for about ten seconds, then it was off.. very frustrating. Within three hours I’d used up all of my bait. I did catch a small codling on some baited hokkais early in the day, though for some reason I popped it straight back, only realising it would have been top live bait about two seconds after it left my hand.. oh well. 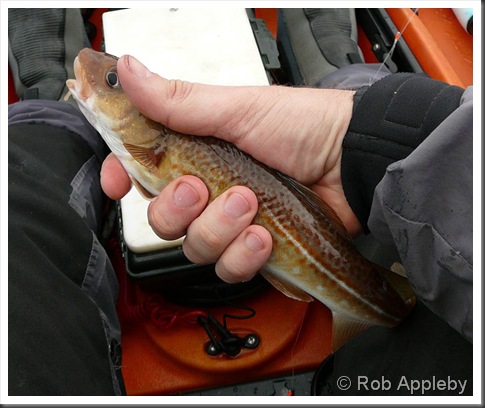 So what was supposed to be a session lasting 6-8 hours, was all over within three hours, definitely not good. I tried for a wee while to catch some live bait, though it clearly wasn’t going to happen, so I decided to call it a day and to come better prepared for the next session.

I wasn’t the only one on the water that day, it’s a tad annoying when you’re sat there, anchored up quietly when a charter boat with a throbbing diesel engine decides to fish close by. 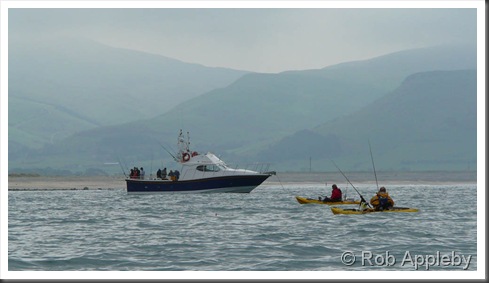 There was noticeably more surf when I returned to the beach. When riding one wave in I saw all to late out of the corner of my eye a reflected set of waves coming side on to me. The nose of the kayak was pushed around and I found myself side on to a breaking wave. Despite the yak being up at 45 degrees with me leaning out into the wave, I somehow managed to stay upright!. Pure luck, but at least I stayed dry and avoided my first dunking.

Back at camp I cooked up a meal and took a stroll along the beach. I could see a couple of kayaks out over the reef, massively frustrating!! 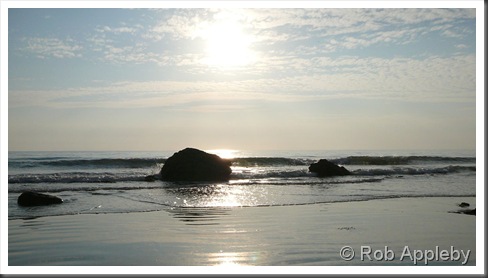 It was another night of refreshments whilst watching the sun go down, life is hard at times!. 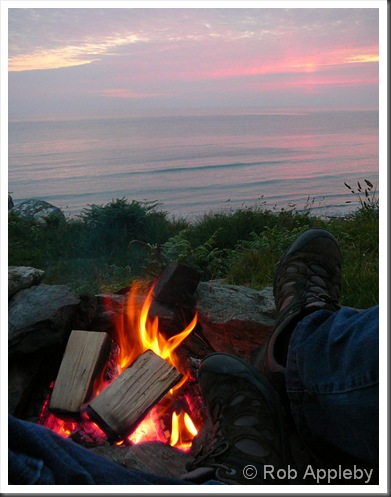 The following morning saw yet another ridiculously early start, 0430 to be exact, the joys of camping in the summer months. I wonder if they’ll invent a tent that keeps the suns rays out ?, no I’m not buying a caravan!!
No mistakes today, straight into the tackle shop and purchased six packets of frozen mackerel. The day was noticeably breezier, a light onshore blow that was creating the odd white horse here and there.

I paddled out with dolphins swimming under and jumping around the kayak, what a brilliant start to the day. I navigated back to the same mark as the day before, the sea was quite choppy, though still quite fishable. The last couple of times I’ve fished for tope I’ve hooked the mackerel through the nose. I’ve noticed that it’s all to easy to loose a bait by being ripped off the hook, at times you don't even realise, only to be presented with a bare hook when checking your bait. I’ve tried small squares of bicycle inner tube over the hook point, etc, though it’s not made a huge difference. I decided to hook the mackerel through the back, weaving the wire trace through the nose to provide a solid hook hold.

I was also hopeful that it’d provide a better hook up ratio as the tope tend to pick up the bait and run prior to swallowing it down, well at least that’s what all the books say.

Within an hour I’d had a couple of large bullhuss onto the kayak, they really are a nasty fish, doing their best to bite a hole into your dry suit!. Again the bait was being knocked around, another bullhuss I thought. However, the baited started to be pulled off at quite a rate so I tightened up into the fish. The reel screamed and line poured off the reel, perhaps as much as 100 yards. The slight down side was the fact it swam up-tide, right past my anchor warp. I slipped anchor and went with the fish. After a fight of a few minutes the tope came to the kayak and was carefully lifted aboard to be unhooked, plus a couple of photos of course! 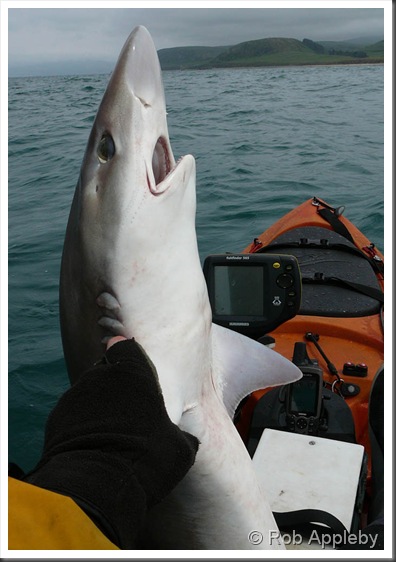 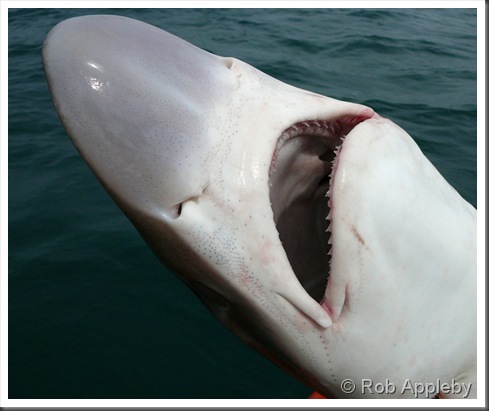 The same charter boat from the previous day came chugging by and dropped anchor less than 100 yards away, I wasn’t too impressed, but what can you do?. There were about ten anglers on board, chatting away and making jolly. In the next hour I managed to catch another two nice sized tope, much to the dismay of the charter boat which was having a very quiet session.

By this time the wind had picked up considerably, as had the sea. Waves were regularly breaking over the side of the kayak, they were steep sided and close together making fishing rather uncomfortable. I decided to pull anchor and head back in, yet again I’d only been on the water three hours. Once paddling back with the winds and the waves I realised it was actually better being anchored!. Without paddling I was being pushed along at 3mph, hitting 6mph as I went down the waves. This should have been a lot of fun, though I needed to concentrate in order to stop being turned going down a wave and ultimately being dumped overboard, something that came a bit too close on a couple of occasions.

Fortunately the waves were quite light at the beach making landing straightforward. Back to camp to de-rig and head home. It was disappointing to have only managed 6 hours on the water as opposed to the planned fifteen hours or more. However, I did manage three tope as well as countless bullhuss. Interesting, the first day say me have three tope runs with one brief hook-up. Day two say me have fours runs resulting in three tope being bought onto the kayak, the other being hooked but lost early on.

I’m putting the much better hook-up ratio down to mounting the mackerel bait differently, I certainly wasn’t having mackerel pulled off the hook, chewed up?.. yes.

Here’s the view from above the cliff at the campsite. I’m not so sure the picture does the sea conditions any justice, though I was rather nasty out there! 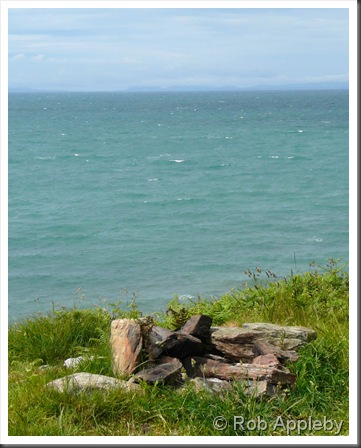 I took some video footage so I’ll hopefully get a short clip put together sometime soon.
Email ThisBlogThis!Share to TwitterShare to FacebookShare to Pinterest

Cracking report Rob and interesting stuff on the mackerel presentation.

Well done Rob, i know how i'll be rigging a mackerel next time i'm out :)