You never know what you’ll catch!

The forecast was for light northerly winds, continuing to rise as the day progressed. With this I decided to fish a mark on the south coast. I finally settled on a mark near Exmouth in Devon. I collected a little fresh lugworm from the tackle shop in Exmouth centre, I wasn’t expecting much though the quality turned out to be excellent.

I arrived at the local car park and that provided the first shock of the day. Car parking was £1/hour with no potential discount until you reached an 11 hour duration!. This resulted in me putting £7 into the meter, not impressed!

I pulled the kayak along the top of a shingle bank and launched into a small river, a few hundred yards from the sea. The tide was out so the river was flowing freely into the sea. There was a shoal of mullet working the surface, fins out of the water. They only took to the depths when my bow pushed into the shoal itself. A heron was fishing on the bank, a really pleasant way to start a trip. 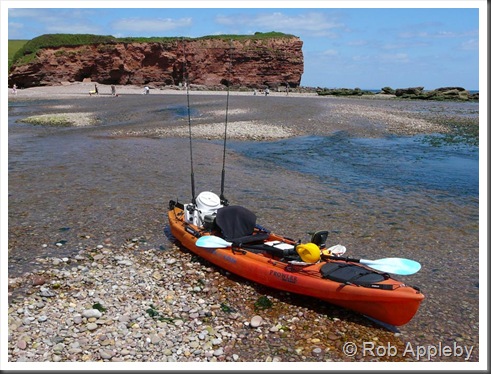 I paddled out and hooked up to a pot buoy close to the edge of the reef. One rod was baited with a fillet of mackerel, the other with fresh lugworm, both mounted onto running ledger rigs.

The action was slow, very slow. There was eventually a rattle on the lugworm baited rod that resulted in a small ballan wrasse coming to the kayak. 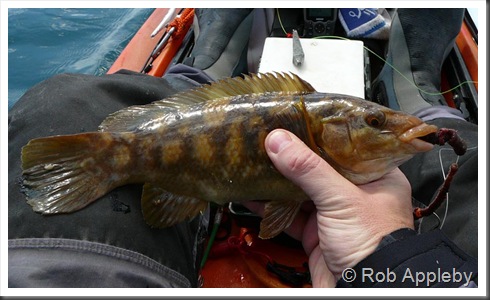 A while later a tourist boat sailed past the front of the kayak, only about 20m in front of me. He passed me by and headed towards two small boats fishing close together, perhaps 30m apart. To my amazement he sailed between them!, incredibly inconsiderate and potentially very dangerous. 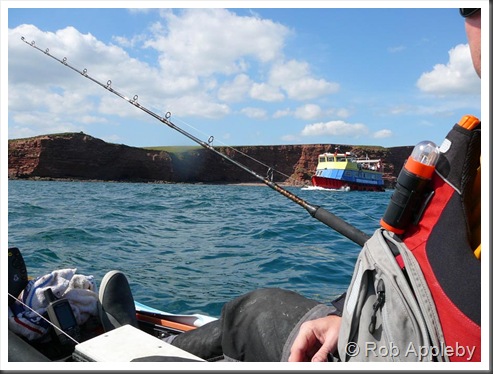 Every 30-40 minutes I moved onto another pot buoy in the hope of finding some action, though it wasn’t to be. The forecasted light northerly wind for the day quite quickly turned into a fairly stiff westerly wind which soon turned the sea into rather a choppy state. I decided to call it a day, though paused to drift over the reef a couple of times. I was drifting very fast, though I managed several very small pollack. 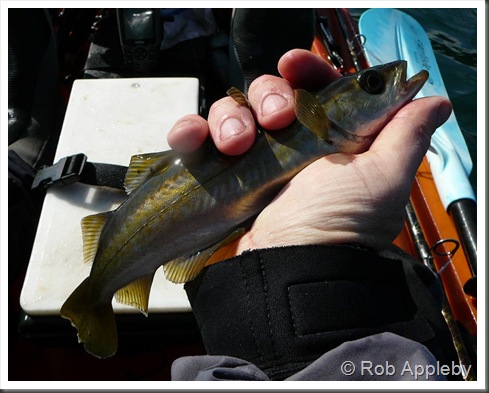 Whilst paddling back along the coast I noticed two men fishing off the rocks. It was clear to me from my vantage point that they’d already been cut off by the tide, so I paddled in and warned them. They made there way back, at times chest deep in water. 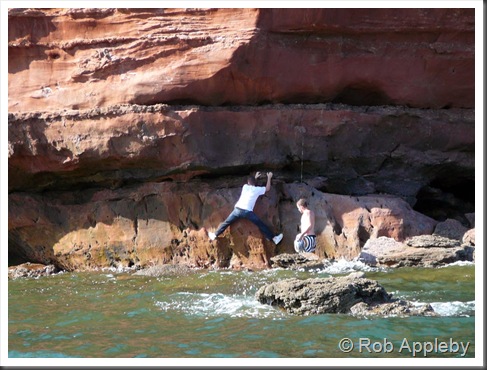 I stayed close by until I was happy that they’d made it back to safety before paddling back to the river entrance. I paddled into the mouth and soon realised that the tide was flooding into the river rather rapidly. I drifted in, without  having to paddle at a steady 8mph.. who said the Prowler Big Games are slow!!

I broke out of the flow and nosed around at the surroundings, bird life and a few other bits. One of the chaps I’d been watching earlier appeared at the edge of the river, clutching his rod and tackle bag. He decided to cross the river, something I knew was not only running fast, but was rather deep!.

He was quickly swept of his feet and headed in my direction at quite a rate of knots. 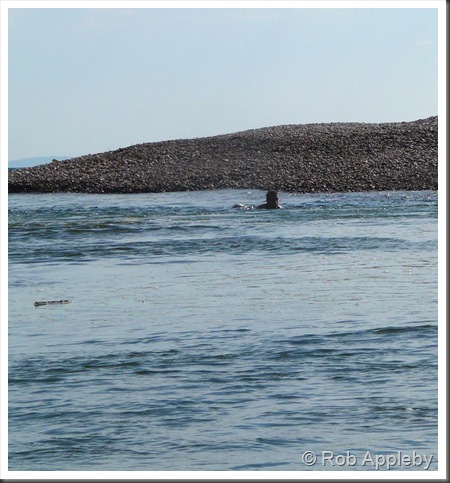 I paddled over, allowing him to grab hold of the kayak. I broke out of the current, towing him back to the shore. He thought I was the Coastguard and was going to give him a piece of my mind!. He was still clutching his fishing gear, I reckon that his gear will require a good wash and service!
Email ThisBlogThis!Share to TwitterShare to FacebookShare to Pinterest

whoa! what's the limit on brilliant bankies? Cheers for keeping your eye on them. I'm not sure I would have thought to do the same.

Cracking report and a good day out by the sounds of it. N there were at least 3 people that I counted there that were lucky you made it out also!

Speaking as a long time shore angler looking at doing KF next year, this blog will be a godsend. Ta.

You should do it. There's no looking back once you've started. I'm off to Scotland for a weeks kayak fishing this weekend, cant wait !