Review of the C-Tug Trolley

When I purchased my Big Game a year ago I also purchased a C-Tug trolley at the same time. I knew the yak wasn't a light model and I had no intention of putting my back out, plus the majority of my launch sites see me parking the car far enough away to justify a trolley.

There are a few models to choose from out there, either the type that mount through the scupper holes or the 'cradle type' mount. The 'scupper hole' type trolley seems to produce quite some negative feedback with regards to cracking the scupper holes, that along was enough to put me off.

The C-Tug seemed was well spoken off both here in the UK and abroad so I parted with my £70 and duly took delivery of one. 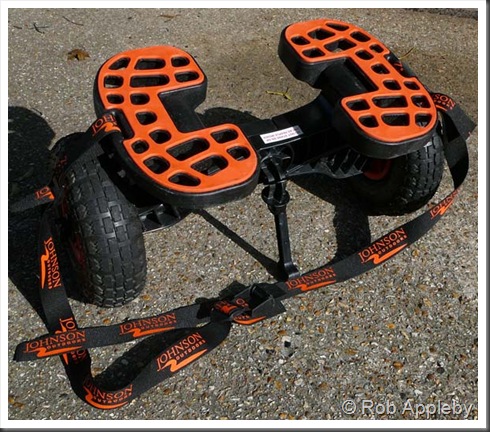 Initial impressions were good, sturdy and simple with 2 straps allowing the yak to be secured to the trolley. Where to position the trolley?, I'm not too convinced on this at all. Positioning in the centre balances the yak nicely on the trolley meaning a light weight at the yak toggle when lifting it up to pull. However, perhaps due to the weight of the Big Game, the trolley pushes the base of the yak upwards by a good couple of inches where is sits against the trolley pads. I don't like this too much at all...

Mounting it further back around the seat scupper hole area, the base of the kayak is much stiffer due to the presence of the scupper holes and it sits far better as a result. However, when picking the front toggle up ready for moving the yak there is quite some weight on the toggle, not so pleasant. 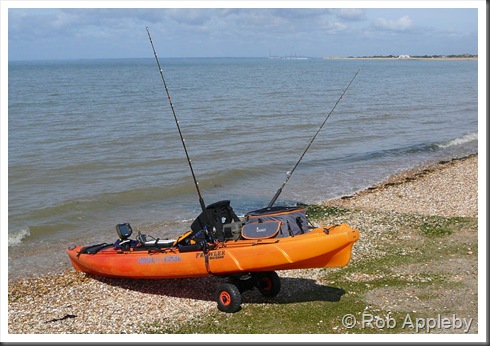 The strap assembly is flimsy with the locking mechanism manufactured from plastic, it didn't take too long to snap, though I've managed to modify it back to a working condition. A stainless mechanism would far better. The strap also has a tendency to slip causing the trolley to be dragged rearwards and ultimately tip over whilst going over soft terrain.

There is a steady leg to position the trolley prior to lowering the yak onto it, a great idea, though this will fall out at an early opportunity and is highly likely to be lost. Top tip, glue it in when you purchase it and then forget about it. 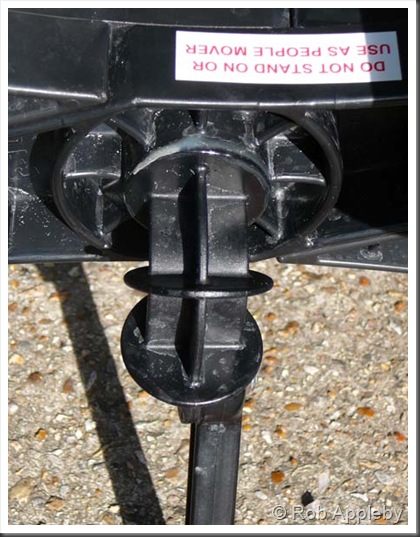 The wheels can be removed in seconds, as can the pad pieces which enables the C-Tug to be quickly dismantled and stored in the forward hatch of the yak. This is a great feature as there's no need to return a trolley to the car before launching, and it enables you to recover to a different location with ease. As said, the wheels remove from the stub axles', though the nature of this design allows sand, etc to penetrate this area which is a great recipe for wear and tear.

You'll hear a lot of squeaky C-Tugs, mostly down to this flaw in the design. The best you can do it to strip and thoroughly freshwater wash the trolley after each trip. 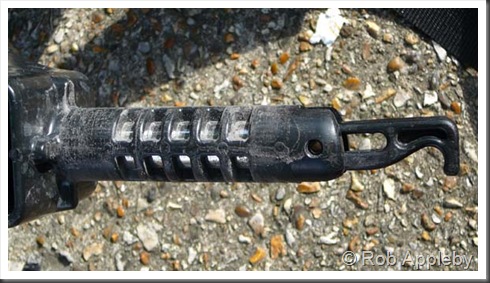 The tyres are quite small and narrow, this is fine for surfaces such as concrete, hard wet sand, etc, though it causes a lot of problems over soft sand and shingle when the wheels simply dig in resulting in a lack of forward progress. As previously mentioned, in heavier conditions the yak can even 'roll' forward off the trolley causing the trolley to tip forward, very annoying!.

It’s quite unstable with my Big Game kayak on top, to the point where the trolley has tipped over on several occasions whilst navigating slightly uneven terrain, causing frustration and damage to fishing tackle. This is possibly partly down to the extra width of my Big Game compared to other kayaks, a wider track on the C-Tug would ultimately lead to improved stability.

So after a years use how do I rate it?.. to be honest it could be a lot better. I manage with it, though at times I could throw it in the bin. The fittings are poor quality considering the selling price and the design requires improvement. The 'pads' that support the yak need to be non-slip, the strap mechanism needs upgrading and it'd greatly benefit from wider tyres for floatation over soft sand and shingle.

There often seems to be confusion over setting up the straps on the C-Tug, below is the link to the official guide.

The Official Guide to Lacing the C-Tug

Good review. As you said it's the best of a bad bunch that would benefit from several improvements. Hopefully the improved Mk2 will be along soon.

My inner tubes perished after a year and they're a b*tch to replace. I replaced the strap with a ratchet type and it's a better item as a result. Oh, I lost the leg, not the first I'm sure.

Great review, and right on the nail. I bought mine with a new kayak last week. Just come back from christening the boat at Cheltenham Beach in Auckland. Had a shocker of a time trying to keep the C-Tug from coming loose and dragging behind the boat. I have the new wheels that look like golf trolley wheels. Same problem with the sand though. Got into the hubs straight away. so much so, I couldn't take the wheels off to put in the kayak. I'll see how it goes. At the moment, I'm not too impressed. The strapping needs some work and the wheels need to be wider.

Hi Terry
I've seen people stick non-slip padding to the C-Tug 'pads' to help stop the kayak slipping. It's always going to slide back to a certain extent when pulling the kayak hard over sand or loose stone. Though when it turns over on itself it's infuriating.

I still use mine most of the time, just living with its faults. I have another homemade trolley which I use for rough terrain and long walks. It's bulkier, but a far better piece of kit. If you want some photos contact me via my email link on the front page and i'll mail some to you.

I don't really see any advantage to the new C-Tug wheels, bar a weight saving perhaps?.

Soft sand, shingle is a killer, it wiill be interesting to see how you get on... keep me posted.

Thanks for the article. Was interested to read it as I have moved away from the C-Tug to a Native Smart Cart.
Soft ground as reported was an issue. Straps as reported were an issue. Visibility to the straps under the kayak was not as easy I would have liked.
Surprisingly wet hull would slip around on tug and straps did not prevent this.
After some time to think about this I think that the issues I experienced may have been due at least in part to hull size and weight.