Yet again it seems like ages since I’ve been on the water. I looked at the forecast on Sunday evening and it looked great, with like winds forecast for several days. I was sat at work on Monday morning planning how best to tackle a spot of fishing... no pun intended. High water was around 8pm and the tide was over 12.1m.

I collected some squid and black lug from West Coast Tackle in Watchet and headed over to the Blue Anchor. As I drove along the cliff top road there was what I initially thought to be smoke blowing over the road, I was wrong, it was fog. I wasn’t too concerned as the skies were blue and there was a cool westerly breeze. I can’t remember what time I arrived, perhaps an hour after low water. As expected with a big spring tide the water was a long way out, further than I’d anticipated.

I rigged up and looking out to sea, it was clear I’d have to wait an hour at least to have a chance of launching. I’d made the decision earlier to take the ‘BucketBoy trolley’. This trolley was designed by an innovative chap off Anglers Afloat. I’ve tweaked the design slightly to suit my own needs, it really is a good piece of kit. What this did give me was the option of dragging the kayak across the reef, something I’d not contemplate with a C-Tug. 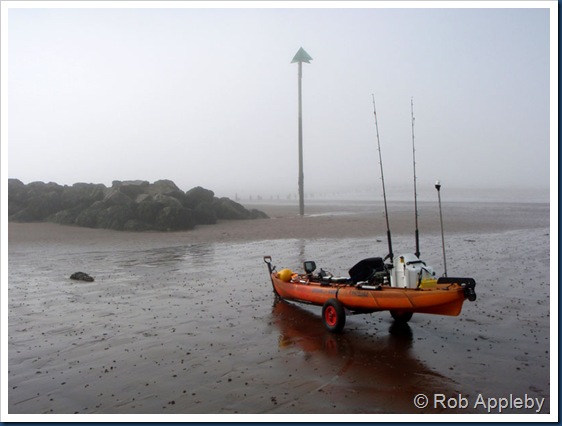 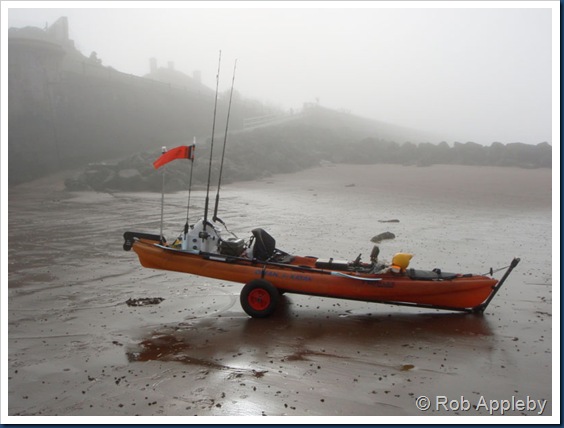 As I pulled the kayak east across the beach the fog thickened towards the point. I was unable to make out the sea hence it made picking a suitable route a little tricky. The Trolley bounced its way across the reef with relative ease, only struggling with the odd larger rock. 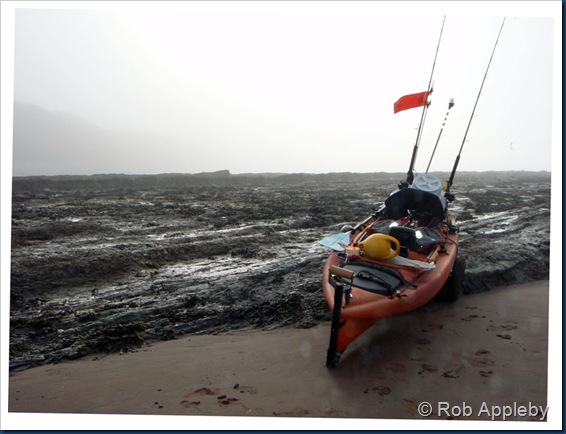 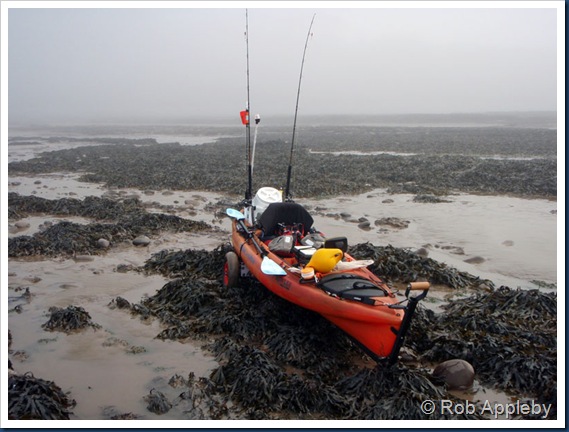 I paddled out with the tide and was soon heading east as around 6mph. The fog wasn’t so bad once on the water, visibility was half a mile or so and the skies were still blue. The mark I fish is just over a mile and a half from the launch site and I was soon anchored up. The expected high water depth was 15-16m so once the anchor hit the sea floor I let out an extra 60m of anchor warp. The tide was running hard. I normally hold bottom on the flood tide with 8oz of lead, however, I was straight onto 12oz. Baits were twin squid mounted onto a 6/0 pennel rig, with one bait tipped one bait off with black lug.

I only had to wait about ten minutes before one rod nodded over with a typical cod bite. The fish wasn’t large, though with the tide running hard the sport was pretty good. I didn’t take many photos this trip as was using my GoPro HD head cam.To be honest taking photos didn’t really cross my mind, that’s unusual for me. There was a steady run of codling between 2-4lb, perhaps a dozen or more were taken during the session. Despite the fierce tide the thornbacks made a bit of a show. These were quite hard work due to the current, the best fish was perhaps 10-11lb with a total of three coming to the kayak on the latter part of the flood tide. There were a handful of conger eel, all small fish that came to the surface quickly. 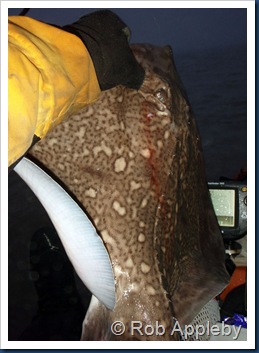 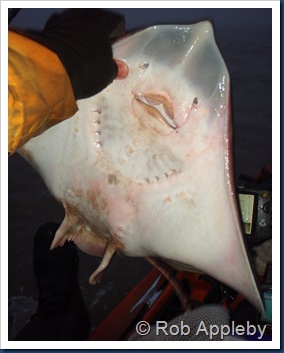 As the light faded the fog started to thicken quite quickly. Visibility was still three to four hundred metres about thirty minutes before high water. However, at high water visibility had collapsed!. I could see perhaps a metre past the nose of the kayak and two to three metres either side, it wasn’t good. I fished though slack water and pulled anchor as soon as the ebb began to flow. I set the GPS to take me back to the slipway and started on the paddle back. I really was quite eerie and very disorientating and the chop on the water made it a little uncomfortable.. bar that it was all good!. Without a GPS or compass you’d soon be paddling in circles, I even put this to the test for a chuckle. You literally have no sense of direction whatsoever.

As I came within half a mile of the slipway the fog actually thickened a little more and I could no longer see past the nose of the kayak. Paddling on, albeit rather slowly, I made steady progress towards the slipway. Fortunately the there was no surf whatsoever so I ambled up towards the slip. The first thing to appear was the vertical wall 20-30m east of the slipway. The slipway finally came into view and I was quite relieved to be back on firm ground. 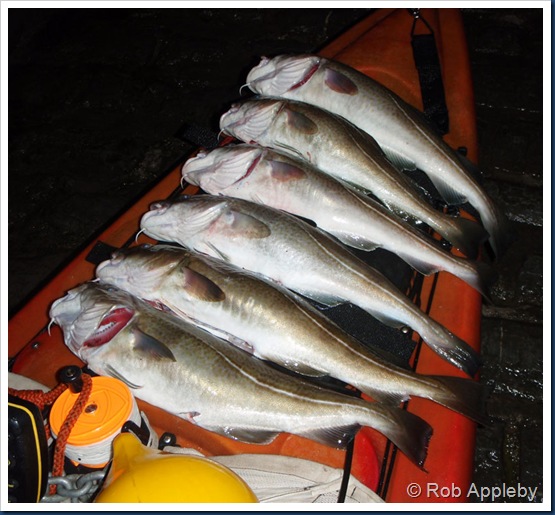 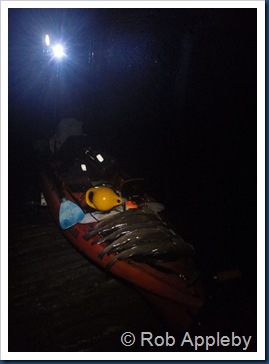 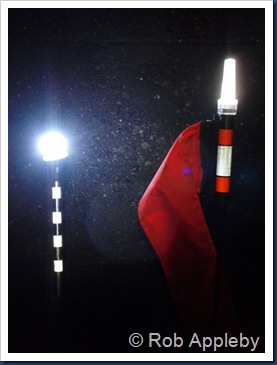 With the kayak back on the ‘BB’ trolley I set about cleaning the catch. The trolley made light work of the slipway, I cant lie, pulling the C-tug up the slipway at the end of a session is a struggle. The fog was a little lighter once off the sea with visibility up to 10-15m. There were two anglers opposite my car so I chatted on to them for half an hour. They’d not had any luck and were definitely taken with a rigged kayak with a sack of codling aboard.

I Took the VISICarbon kayak light afloat and it performed well. I really like having a flag on the kayak, something I didn’t expect. Perhaps it’ll prevent some of these yachts getting too close when fishing busier waters. As expected you cannot compare it to my current light with regards to light output. I fished for a while with only the VISICarbon switched one and it’s performance is more than adequate.

No complaints with the evenings fishing. The fog was unexpected and made the trip back rather interesting. Hopefully the good weather will hang around as forecast, I quite fancy another trip before the weekend.

Nice report again Rob - interesting in the fog by the sounds of it and codling to boot.

Great report - total respect to you for your winter / spring kayaking trips! Could you link to the BucketBoy trolley thing? I have a C-tug and have to pull it up steep slipways too!