Over the past few months I’ve seen video footage become far more common place within the sport of kayak fishing. When I post a report on a forum, or here on my blog, I’m a great believer in populating that report with a few photos to back up the written text. In my opinion it makes for a far more interesting read, though can it be improved on ever further?. That takes me back to the increasing amounts of video footage that’s started to appear over the past months. One website that springs to mind is Yakass, an Australian kayak fishing blog that is incidentally well worth a visit. I thoroughly enjoy watching some of these video clips and I just had to give it a go.

There a few waterproof video cams on the market, though I was really struggling to find a product that I was prepared to commit to. What I didn’t want was a cam mounted up that required you to move forward to operate. Also in that position it would only be offering a view of myself. As much as I’m undoubtedly incredibly handsome, it’s probably not what avid kayak fishers wish to view!. The other problem with all of these cams was the limited field of view, ally that with the cam mounted up forward, facing aft, the result I felt was going to be rather disappointing.

What I wanted, due to the close up action on the kayak, was a cam that I could position in such a manner as to capture the best of the fishing action.

Basically, I was looking for the following features:

I’m not too sure how exactly I stumbled onto the GoPro cam, no doubt after way too many hours of surfing and research. After reading a couple of reviews and viewing the video footage on the GoPro website I made the decision that the GoPro Hero Wide helmet mounted cam would fulfil my requirements. After a bit of price checking an order was eagerly placed.

After several days a disappointingly small package arrived, could this really be it ?. Sure enough it was, beautifully packaged in a perspex case.. good start.

On laying it all out there was actually quite a bit of stuff crammed into the small package. 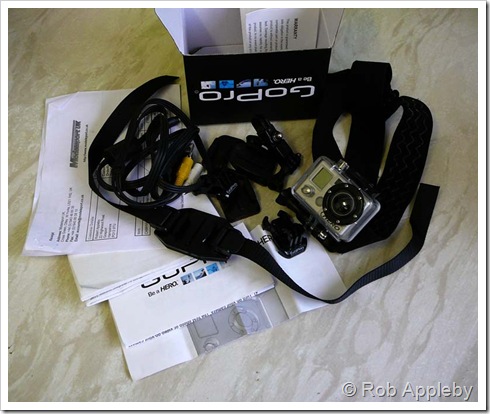 Once spread out the contents became far clearer, comprising of a the cam, a head strap, electrical leads, additional mounts as well as various instructions. 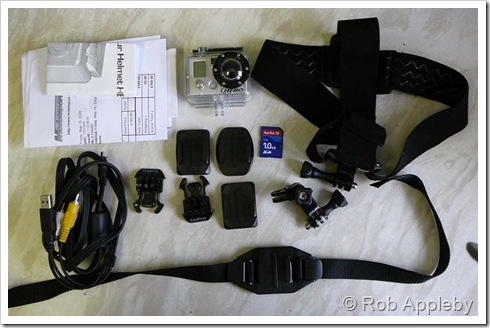 The SD memory card shown above wasn’t included and was purchased separately. The cam itself comes already fitted to it’s waterproof housing. 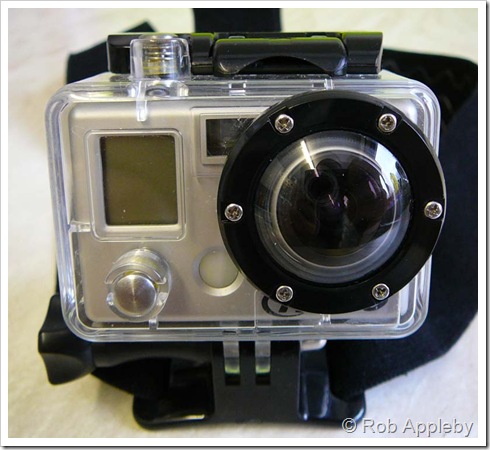 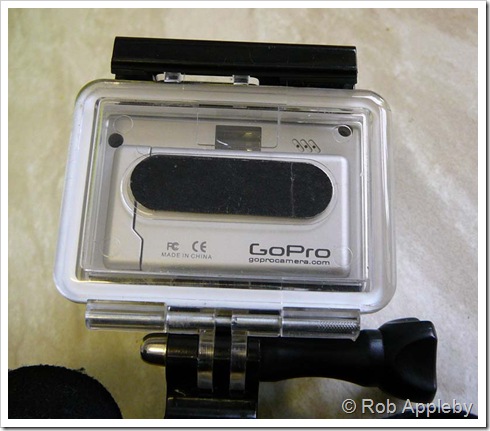 So getting down the the specs of the cam. The best bit for me is the 170 degree wide angle lens. I’m not aware of another cam that achieves this (bar the newer HD model) and it fitted my most important requirement perfectly. The earlier Hero cam was around 3 megapixel, the Wide sports a 5 megapixel sensor (512x384 resolution video). I’d already decided that a head mounted cam was the way to go, hence why I order the ‘Helmet’ version. What with its wide angle lens and improved resolution it seemed ideally suited to my needs.

There was one more vitally important requirement, it had to be waterproof, splash proof just wouldn’t do. Again the Hero cam impresses, mounted within its housing it’s waterproof down to a maximum depth of 30 metres. Not only it is suitable for the kayak, it has the potential for scuba use, etc.

Once removed from the waterproof housing, something that it achieved in seconds, the cam itself is even smaller than I’d originally thought. 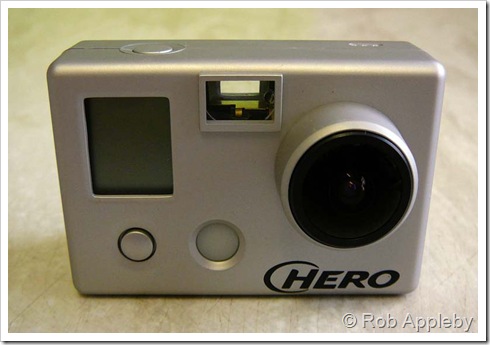 There is a small viewfinder which to be honest I find rather pointless. Due to the wind angle lens, point and shoot doesn’t need to be accurate, and after playing with it once or twice I didn’t find the framing when using the viewfinder to be particularly effective.  However, that being said, it’s unlikely to be a feature that you’ll use.

The SD memory card slides into the right hand side of the cam, it fits easily enough, though it requires a good set of fingernails to push it fully home in order to achieve a positive lock. A 2GB card give almost an hour of video recording and almost 2000 photos. A later software upgrade via the GoPro website allows the use of a 4GB SD card. 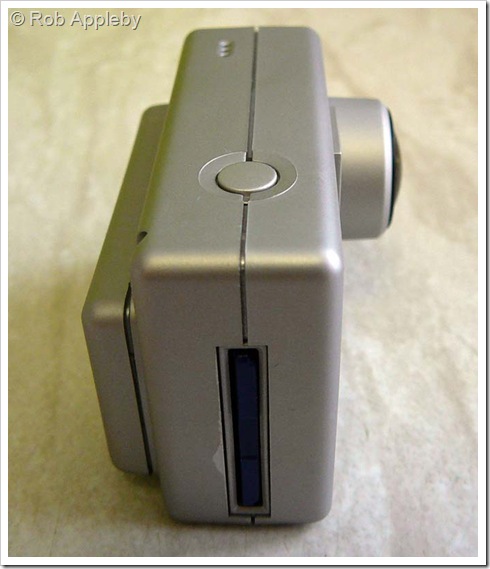 As can be seen above, the shutter release/cam button in mounted on the top of the unit. There’s a USB connection on the left hand side which gives access to the SD card should you choose not to remove it. Personally, I found it far easier to remove the SD card and read it direct from the PC. 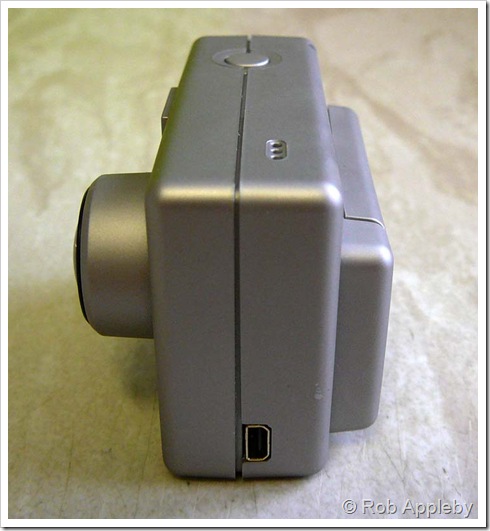 The opening for the microphone can also be seen on the top side in the above photo. I’ve only used the cam within the waterproof housing and I’ve found the microphone somewhat ineffective in this configuration, despite setting it to ‘Hi’ in the settings menu.

The rear of the cam provides access to the battery compartment. This houses two AAA batteries with NiMH items providing up to two hours recording time, this can be increased towards three hours if lithium batteries are used. These factory quoted figures have proved quite accurate in use. I’ve only used lithium batteries once, though due to the cost I’ve used 2500mA NiMH on all other occasions. 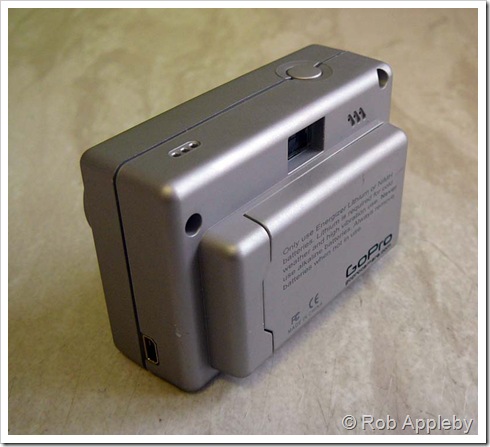 A point to note is that initially the LCD display is upside down. The result of this is you cant make sense of what you’re looking at until you realise the problem. However, this can be changed within the settings menu. The instructions are very good at helping the new user navigate their way through the menu. 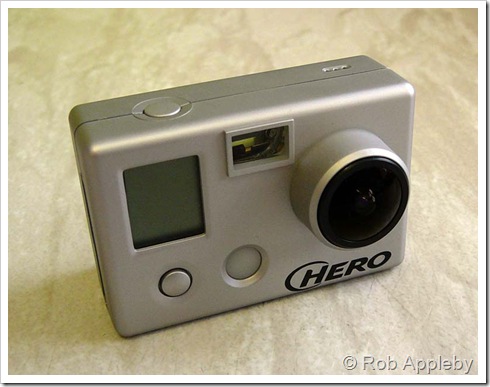 The cam is really very easy to operate, and once settings are fully understood, the camera can be quickly configured or reconfigured for any specific situation or set of conditions.

There’s also a small circular light on the front that flashes whilst video is being recorded.

The waterproof housing itself is wonderfully simple. A two piece polycarbonate design with a simple clasp lock. The seal itself it a single O-ring type seal which is easy to keep clean and to replace should the need arise. Attention should be paid to the cleanliness of this seal, a small piece of dirt, or a hair, could cause the seal to fail. 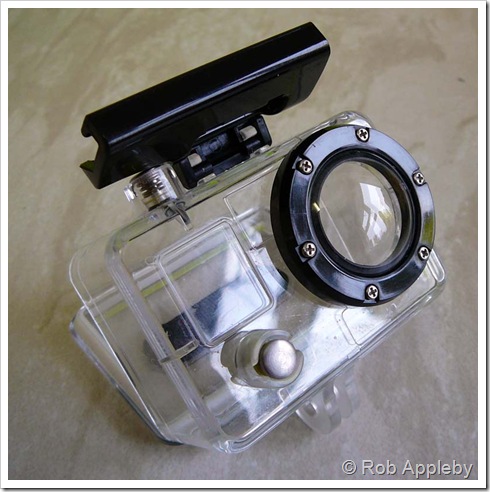 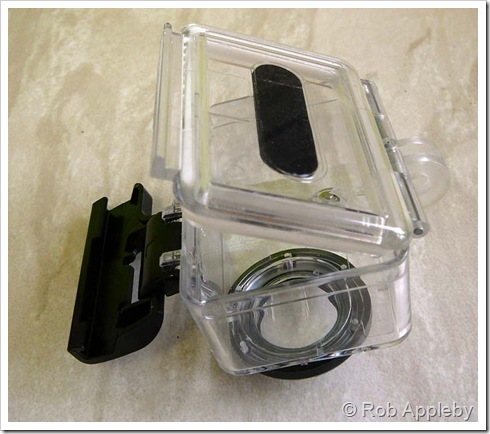 The Hero Wide is not just a video cam, it can also be used to take still photographs(2592x1944 resolution), either a single shot, continual shots every three or five seconds, or three photo bursts. There is also a self timer function, another feature I’ve not found a use for in my environment.

Well to get the minor negatives out of the way first. There’s no protective cover for the lens whether in the housing or out of it. This is in my eyes quite an oversight.

When it’s head mounted there’s no audio confirmation of the unit having powered up or down. This has resulted in me missing a couple of potentially great video scenes, something that at the time was highly frustrating. To overcome this I find myself removing the unit from my head to check it’s recording before popping it back on, again, not ideal!. This problem has been addressed on the newer HD model.

The cam/camera isn’t very effective in low light conditions and direct exposure to the sun results in the sun appearing as a black disc. The latter problem is allegedly fixed by the latest software upload from the GoPro website.

The audio recording when utilising the waterproof housing is also rather poor.

It’s very simple to use, once you’re familiar with the menu it’s easy enough to navigate yourself through the various functions. The video quality is quite acceptable considering its size and wide angle lens.

The battery life is good when used with quality batteries. The waterproof housing makes the Hero far more versatile than video cams within the same price bracket. For the potentially extremely wet environment in which I operate this feature is invaluable, especially when you consider the cost of of these units. It’s not an item you want to be replacing.

It’s versatility through it’s mounting options and rugged build is outstanding, and in overall performance it leaves its competitors standing.

I use Pinnacle Studio 12 as my video editor, something whilst easy to use, is still packed with useful features. I’ve taken some trial photos with the Hero cam, though the quality is acceptable it doesn’t begin to compare with my Olympus 795SW. That being said, I didn’t purchase it with a view to using it as a camera, it’s use for me was purely as a video cam. I say was because I’ve recently upgraded to a Hero Wide HD. Why?, well I was that impressed with the standard Wide that when the HD made an appearance I just had to treat myself. I’ve yet to use it in anger, though a review will follow in the coming weeks, initial impressions are very favourable.

Below are some sample edited video that I’ve uploaded to Utube. The quality has been reduced as a result of video compression on both my own editing software and the Utube website itself. 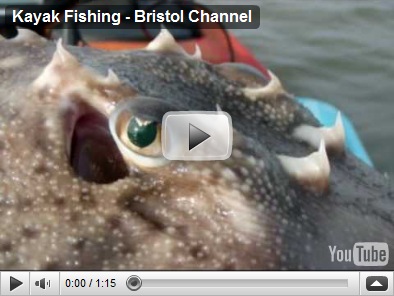 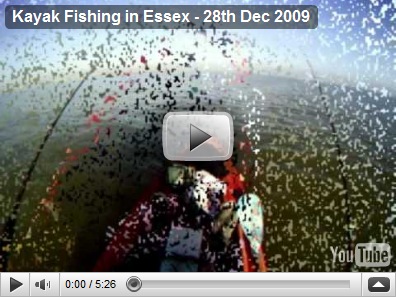 If You have a small mirror, You can check if the circular light is working, isntead of take the camera from Your head.

I mean everything is ok, the light can reflect on: mobile, some smooth plastic, etc.

Yeah, I know what you mean. Though if I switch it on when I hook up into a fish, it's not ideal to be trying to check if it's actually switched on or not. The newer HD version has two different audio tones to confirm that it's either switched on or off, something that I much prefer.

Nice review, from the post date I understand that this a previous GoPro model. I'm looking for a new 2012 GoPro 3 review. I'm waiting for your review.