Sharkatag 2010 takes place between the 18th-20th of June, with Tope being the main target species. No doubt many other species will feature during the event, though its main aim is to tag as many fish as possible from the shore and boat; to highlight the urgent need for shark, ray and skate conservation in Scottish waters. 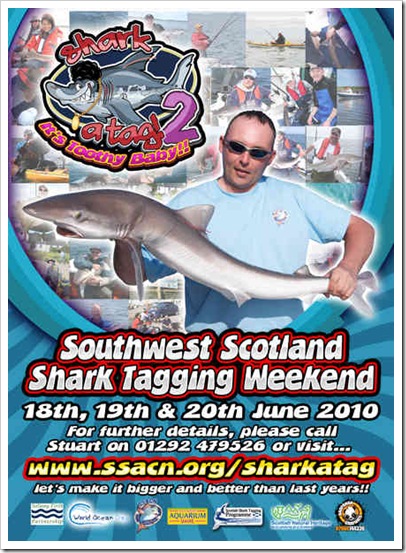 Over the past two decades shark species around the UK have been in severe decline. As data is gathered these statements can be backed up with solid facts and figures that’ll hopefully ensure that the government will take suitable rectification action.

Sharkatag 2009 attracted over 200 anglers from around the UK resulting in over five hundred fish being caught to rod and line. From this number over 200 fish were tagged. 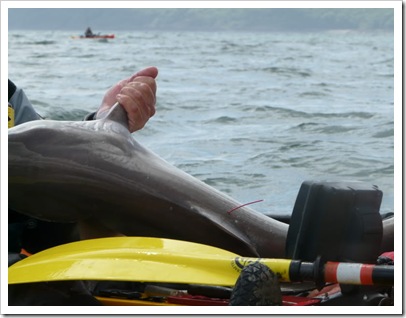 The results aren’t staggering, though this is no doubt a realistic reflection of current fish stocks. As a teenager during the 1980’s I was a regular visitor to the Solway area. As well as Tope, Spurdog were a common catch in the area. Tope numbers have dropped quite severely, however, Spurdog are all but absent in the area.. a sign of the times for sure.

For decades, decisions affecting commercial interests have been made without full knowledge of the state of fish stocks and the marine environment; however, when recreational stocks are in danger, there has always been a total lack of action due to ‘an insufficiency of data’.

Sharkatag is part of SSACN’s Scottish Shark Tagging Programme which has been introduced to help overcome that ‘insufficiency’ and fight for the regeneration of shark, skate and ray stocks in Scottish waters.

Sharkatag 2010 is expected to draw yet more anglers compared to the previous year, I for one intend to make the journey the year. As well as highlighting the problem with declining fish stocks, it goes a long way to raising the profile of sea angling within the UK. Hopefully this will lead to a meaningful involvement in helping manage and regenerate the fish stocks of interest to sea anglers.

For more information please click on the link below: