When I knew I was going to be spending a month in Cornwall all I could think of was clocking up as many hours as possible on the water. I lived near Helston for several years, though sadly kayak fishing was an unknown at that time, certainly to me.

The fishing in the South West can be excellent at times, and despite it being March I was still hopeful of a little action. The first day I arrived the weather was good and fishing would have been a real possibility. However, I was recovering from the worst 24 hour bug that I’ve experienced in my life. I spent the best part of those 24 hours talking to God down the ‘big white telephone’ and my voice and general well being suffered for several days as a result. 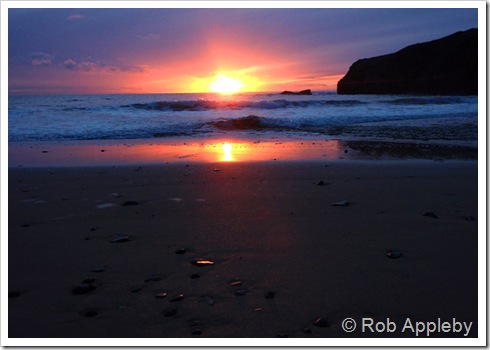 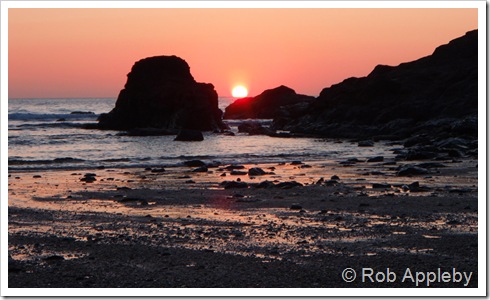 I sat at the top of Poldhu Cove for a couple of hours, sipping on some juice and nibbling at a piece of bread feeling rather sorry for myself. If that wasn’t bad enough the weather was to deteriorate very rapidly resulting in the following week being a complete right off, with winds of 20-30mph being the norm.

After chatting to a couple of the locals I was told you can catch conger, bass and bullhuss up the Fal estuary, by the end of the month there'll be Gilthead Bream as well. Trying to find a launch spot where I wanted to launch wasn't easy, in fact the best I could manage was three miles downstream on my intended venue. Ah well, it was cold, but it was as also sunny, so I rigged up and had paddled off by mid-afternoon. 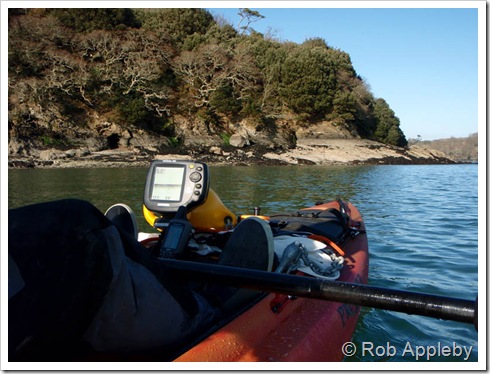 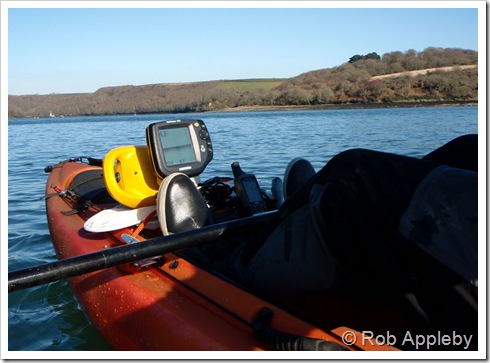 Lovely spot for a paddle, and despite being 5-6 miles from the estuary mouth there was still 18-20m of water in the main channel!. Lots of wildlife, seals, herons, etc, etc. I parked up next to this chap working on a mussel farm, interesting stuff. He was steadily lifting the colonies and bagging them up as the afternoon progressed. 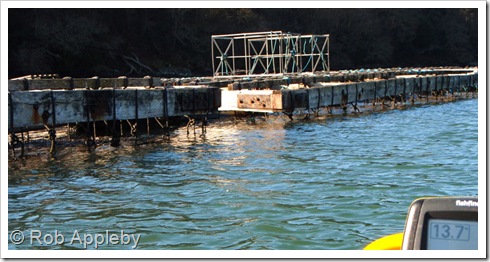 At the end of the day he loaded his boat and headed up river. He was also an angler and confirmed reports about the fishing, but he also reckoned the water was too cold at the moment. The fish finder was showing less than seven degrees.

I eventually wet a line for an hour, no action whatsover, though to be honest I wasn't in the mood, I was more interested in looking up and down the various inlets and features along the estuary. 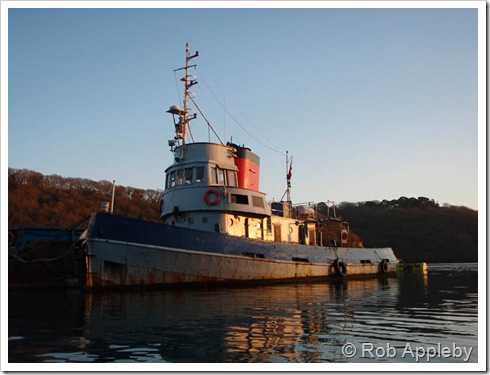 The tide was running hard in the main channels, at least 6oz was needed to hold bottom. If you dropped anchor from the rear you swung downstream. The top two metres of water was always running downstream, below it's howling upstream on the flood. Tricky as you cant get your anchor to bite and it just bumps its merry way upstream with the tide.

As the sun dropped towards the horizon I turned and headed back towards my launch point. Despite the lack of time spent fishing the scenery and great weather compensated completely, no complaints. 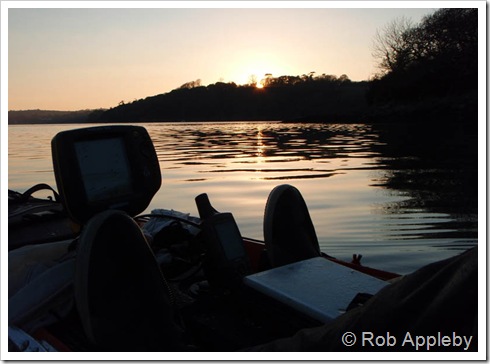 I paddled about 3.5 miles upstream before I decided to turn back, what with zig-zagging from one inlet and another I probably clocked up 8-9 miles. Hopefully the weather will soon improve and I can get out to sea. Estuary fishing doesn't really do it for me, it just doesn't feel right. I guess I just like being out at sea, each to his own.