Getting back into it - Fishing the Solent

It seems like forever since I’ve been out fishing on the yak. In fact due to work commitments I’ve not wet a line since returning from Scotland. Two months of not being afloat, it’s unheard of!

The pressure was finally off early this week and a short notice trip was put together to fish a locally in the estuary in the hope of some autumn bass. This time last year the estuary was producing some good, if not sporadic, fishing. The mark is a short paddle which allows for some close in fishing to heavy structure. There are several marks in the local estuary that scream bass, though anchoring is tricky to say the least. Fishing in between large structures with tide flowing in and around, tends to produce large eddy areas. The current rotates causing the yak to swing slowly in the tide like a pendulum. Get it wrong and you’ll swing into the main tidal stream breaking anchor. 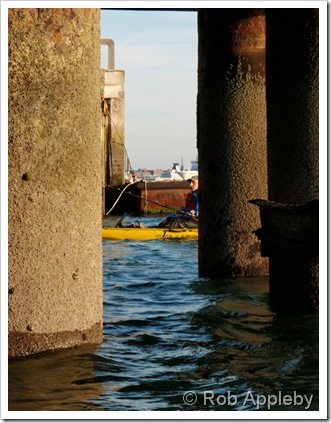 The session lead into dusk where the ‘witching’ hour failed to materialise. Quite often, once the sun drops down there’s a manic hour when the bass come onto the feed, sadly it didn’t happen, though it was a stunning evening all the same. There are definitely worse way to spend your evenings... 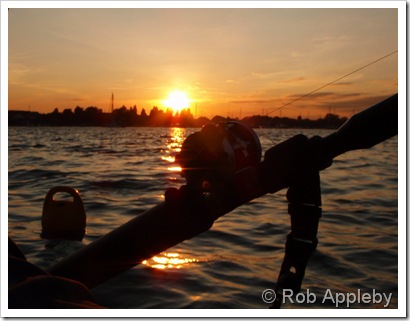 As darkness came we called an end to the session, bar one small pout it was a fishless evening, no real complaints though.

The following day the decision was made to paddle out in the hope of catching the last few mackerel of the season. I didn’t believe that they’d still be about, though my yakking mate had been told different so we headed out, hopes high. Amazingly there were indeed some mackerel about, we managed a bag full between us which will see us good for a few sessions during the winter months.

Another yak fishing buddy told me he’d been catching thornback locally, so after a short break for dinner we headed off to Hillhead for a spot of night fishing. 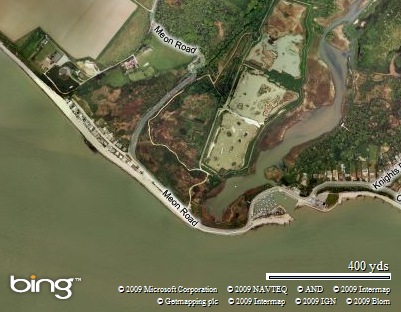 The weatherman lied once more, the forecast was for a very light NW wind, though it sat as a light SW blow all evening and into the night. No great shakes, though it meant a light chop instead of glassy calm.

My targets were bass and thornback ray, hence I was rigged with a large mackerel strip rigged on a pennel rig. The other rod was rigged with sandeel on a single hook running ledger. I didn’t have to wait too long for the first bite of the night, good firm pull.. a thornack? 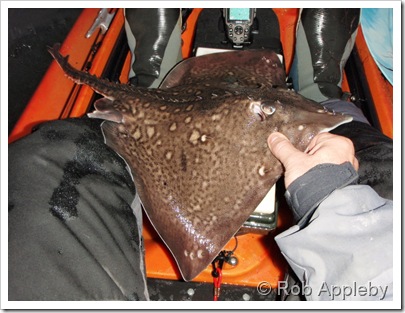 Nothing huge, perhaps 5-6lb, though against the current it gave a decent account of itself of light gear. Close up, they’re quite a pretty fish don't you think? 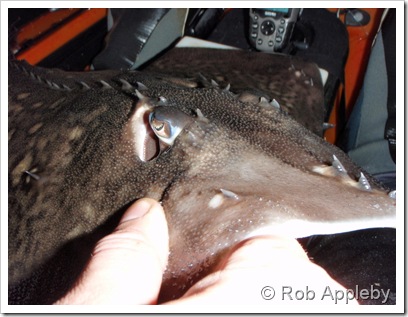 Sadly that was the last of the action for me, Andy picked up a small thornback, his first off the yak though so it’s still all good stuff. We fished on for a couple more hours though the action was painfully slow. 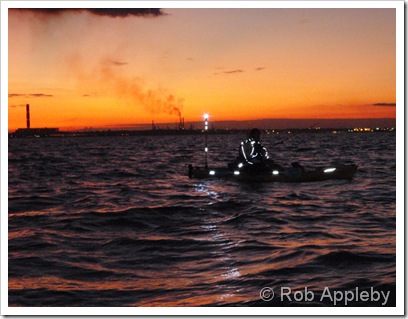 Though again, it was a cracking evening, another stunning sunset, geese circling over the adjacent nature reserve.. life was good. 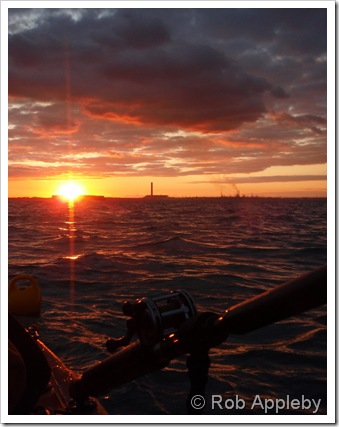 I’m back to regular fishing, though I’m working further afield for the foreseeable future. I foresee my fishing trips being concentrated in and around the Bristol Channel, perhaps on the southern coastal beach of Chesil and its surrounding area.

It’ll be good to fish some new areas.