Well now that the work load has eased somewhat I’ve been able to dust off the kayak. The weather this week has been stunning for the time of year, though it was only today that I managed to get out onto the water.

I fished the Bristol Channel a couple of times last year, plenty of conger eel plus my yakfishing buddy caught himself a cod of nearly 16lb!. I’ve relocated during the week due to work commitments which puts me under an hour from the mark.

I took a steady drive up, passing by a local tackle shop only to find he’s closed on a Wednesday, typical!. Still, I tracked down some mackerel and squid and was soon rigging up ready for the off.

The water here is brown with sediment, visibility is probably only 3-4”. The reef here has a couple of channels running through it, and with the aid of the fishfinder I was soon anchored up in what I was hoping would prove to be a plum location.

I commenced fishing on the last couple of hours of the flood tide, though bar a couple of whiting it was all rather quiet. However, once the tide switched to the ebb the fish came onto the feed. The first bite was a stonker, almost pulling the rod tip into the water, sadly, I missed it. I didn’t have to wait long before the first conger started coming to the yak. The first one was a tiddler of 2-3lb, though each one seemed to be progressively bigger. 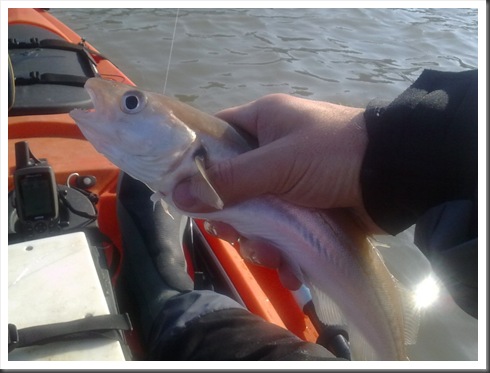 I dropped a couple of good fish within the first few seconds of hooking up, this may have been down to using barbless hooks, or perhaps the fish were just mouthing the bait. I ended up loosing four fish in total.

Whilst retrieving one decent eel it decided to take a sharp left turn half way in, taking my other line with it. If that wasn’t bad enough five seconds later the other rod hooked up with another conger. It came off after a minute though the damage was done, the resulting monster tangle was cut off and I ended up having to re-rig both rods. 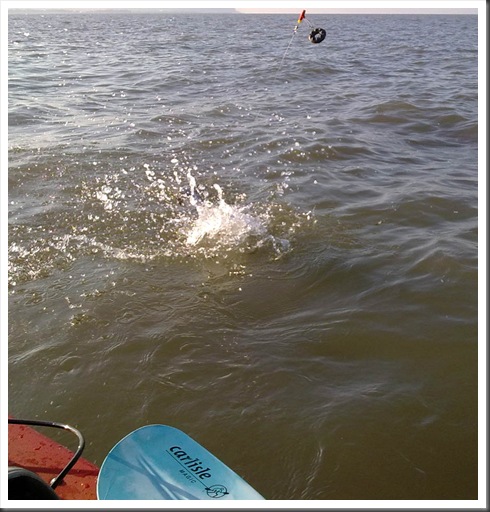 The eels were small, a few around double figures, the biggest maybe 13lb?. Though that wasn’t the point, I was fishing with 6lb rods and these fish were giving a cracking account of themselves, providing some thoroughly enjoyable sport.

I ended up running out of bait which ultimately put and end to the fishing. My last bait was the head and backbone of a mackerel, the backbone folded over on itself to get a bit more bulk, before whipping it onto the hook. It might have been rather desperate, but it resulted in a hook up with a couple of minutes! 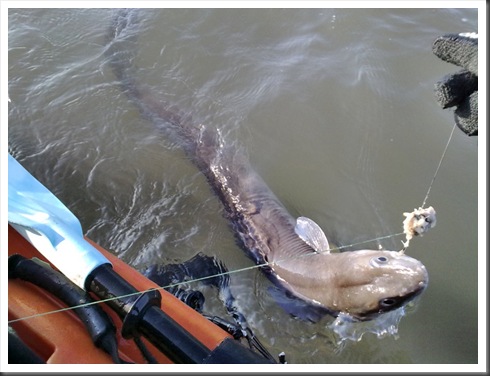 So with the sun going down and the bait supply exhausted, I raised anchor and paddled back in. What little breeze had been present earlier in the afternoon was now down to a whisper, a perfect end to a thoroughly enjoyable session. Hopefully, to be repeated tomorrow.

I’d also managed to forget my camera, so the photos in this blog entry are from my new Nokia 5800, not brilliant by any means, but respectable and better than nothing at all. 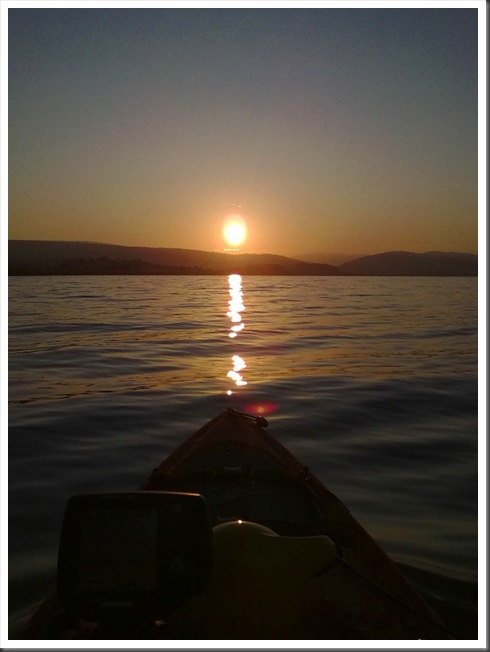