Well this trip was meant to happen yesterday when the wind was nil and the sea as flat as a pancake… however, it didn’t due to work commitments. Somehow I managed to wangle to today off today and I was on the road by 9am, heading in the direction of the Bristol Channel. The last two trips here have been truly awesome and I was hoping for some similar action.

I took a slight detour and had a full English breakfast, and it was just the ticket. The weather on the other hand wasn’t so good. A blustery wind blowing from the south east, though the headlands offered some protection, I didn’t hold too much hope once I was a few hundred metres out.

I was rigged and ready to launch just before midday. The sea looked perfect, how deceiving an offshore blow can be! 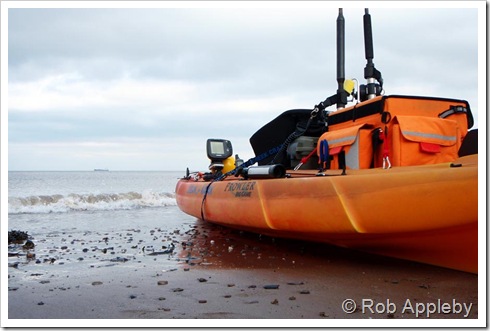 I paddled to my mark and watched the wind pick up as I left the shelter of the headlands. It was a little worse than I’d hoped for, blowing a steady 15 knots, gusting towards 20 knots. Being wind over tide during the flood period caused the yak to swing almost ninety degrees to the tide flow, not ideal. I was wishing I’d bought my drogue along, next time!.

The baits were big, pennel rigs using 6/0 Sakuma 545 hooks. A cracking hook which I highly recommend, strong whilst being extremely sharp.

I only took squid and mackerel as it’d proved so successful on my pervious trips. I was assured that it was still a bit early for the cod to be about in any numbers so I held back on purchasing any lugworm.

The first 15-20 minutes were quiet, though the conger soon started to show themselves. They remained quite small throughout the day varying between about 6-15lb, the average being around 10lb. Though I'm hardly knocking that, on my 6lb rod these are still cracking sport. 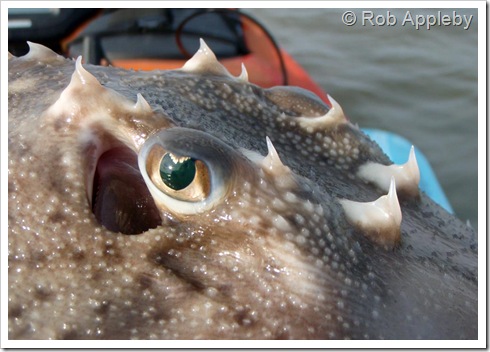 I also took along my 20lb Ugly Stik rod in the hope that’d attach myself to a cracking eel as I’d managed the previous week. Despite being a 20lb class rod it still retains quite some flexibility whilst giving very clear bite indications. 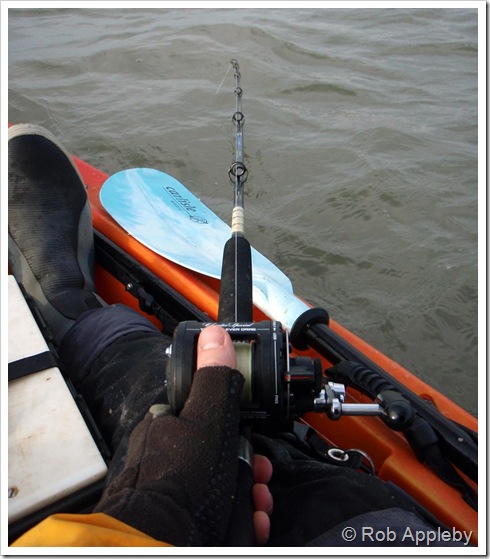 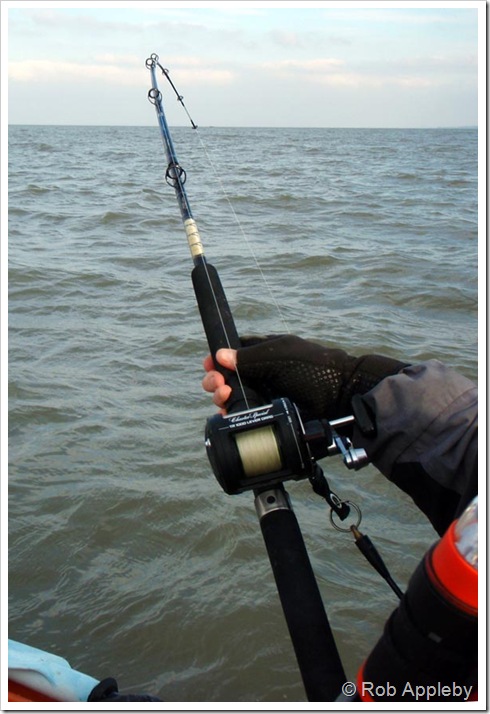 The reel in the above photo is a Shimano Charter Special, a small lever drag which I’m hoping will be used in anger next year against some tope, to date it’s proved to be an excellent piece of kit.

The 6lb Shimano rod was getting good workout throughout the day, coping with the smaller conger with ease, as well as the bigger rays that were proving to be plentiful. 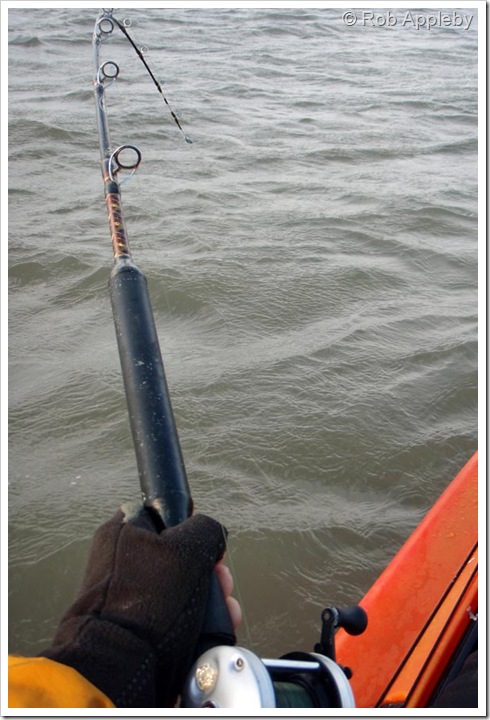 The fishing never really let up for the 3 hours of the flood, slack water and into the ebb tide. The ebbs tides runs strongly here and I’m assured that the ebb tide is the better part of the tide to fish.

The tide was quite small today, though it still produced a good 2 knots+ on the ebb. On the flood I was getting away with 4oz of lead to hold bottom. On the ebb I quickly moved to 6oz, though I was eventually forced to use 8oz despite being in only 8-10m of water. This is where the 6lb rod struggles, anything more than 6oz of lead (2-4oz is ideal) and the pleasure disappears, there’s no feel to the rod and the tip is pulled over. Still, it’s a good excuse to purchase a couple of 12lb rods in the near future!.

The rays were a good size today, rarely dropping below double figures. There were a couple of crackers amongst them, I didn’t bother weighing them though they were clearly heavier than the 11lb ray I caught on the previous trip. 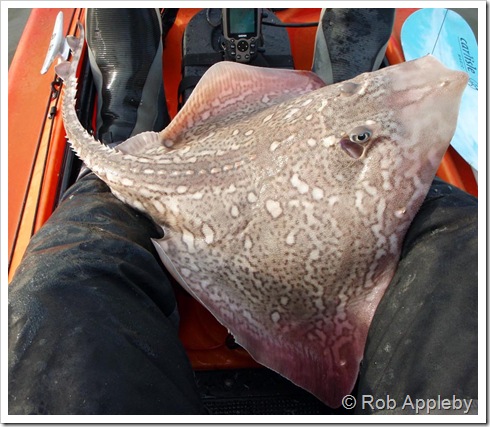 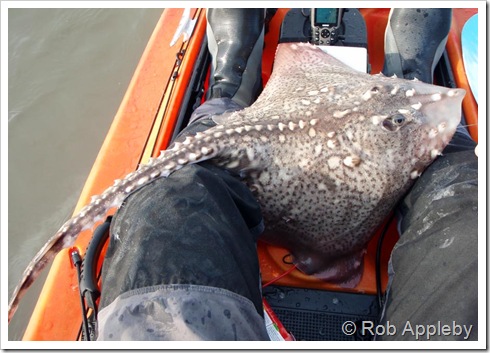 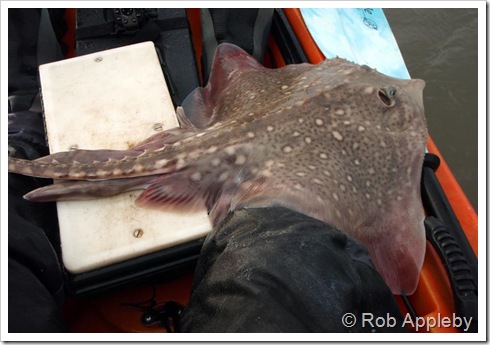 In a running tide on the 6lb rods these are fantastic fun. Taking line, hanging in the tide, getting them back to the yak can take quite some effort at times. Below is my best ray of the day. 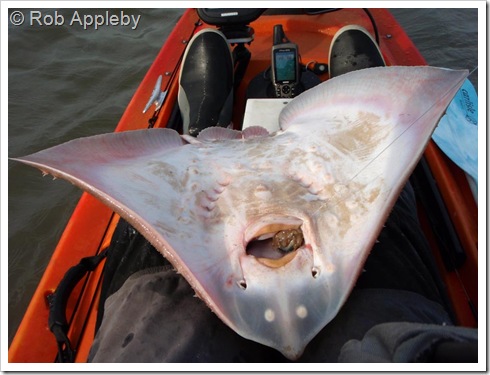 Now when it came to capturing some images of the conger I had a cunning plan. A while ago I purchased a Hero Go Pro video/still camera. It’s a cracking piece of kit, waterproof with a near 180 degree view. I reckon it’s ideal for the yak. However, I experienced ‘technical difficulties’ today, all due to user error!. Basically is comes down to being more familiar with the unit. With it head mounted, you’ve no indication as to whether you’ve correctly switched it on, or selected record. 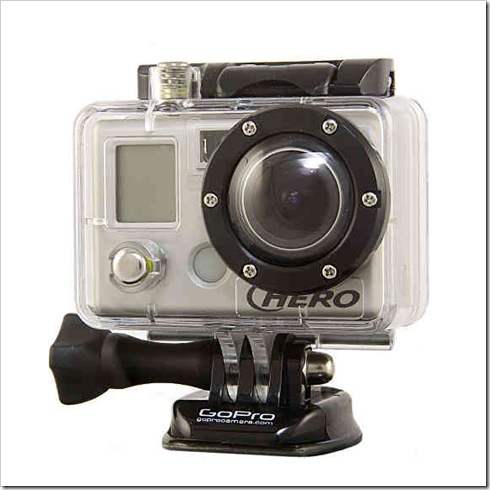 On a couple of occasions I failed to depress the record button sufficiently, meaning some great scenes weren’t recorded. However, I did manage a great what I thought would be a great bit of congering footage, alas, I neglected to remove the lens cap!!!!.

I did eventually manage a couple of pieces of film which I’ll endeavour to edit and post over the next couple of days, again, it’ll be a learning process.

Here’s what little I did manage to salvage…

To conclude, the day produced another cracking session. I ended up with 15 conger eels and 6 thornback rays averaging around 10lb a piece, that’s a whole lot of fish. Chatting to the locals I was told not to expect too much as the tides were small, the best fishing would be over the weekend as the tides headed towards the springs. If that’s the case there’s hopefully better to come. I know that there are some big eels down there, and what with the cod due to show in numbers over the next few weeks the area promises some cracking sport.

Very cool report! Looks a bit chilly out there!

Nah, it's still above freezing :)

Prefer fishing for Roker from a boat wiht a warm cabin and kettle!! Well dont though! Recently fishing just outside the River Crouch. 2 double figure Thornies and 7 others!! (March '10) great day, you can read about
Thornback Ray Fishing here. Good luck though Rob, I bet Mullet fishing would be great in a Kayak!