Well it’s been over a month since my last report and that’s down to one factor alone, the atrocious weather!. I’ve never known such prolonged periods of high winds. That being said, once you’re into kayak fishing in a big way you become an avid watcher of the weather forecast, more so the wind predictions, far more than I ever did as a shore fisherman. Once the wind passes much over 10mph a fishing trip soon becomes questionable.

So after a month of depression, a short weather window presented an opportunity to wet a line. The Bristol Channel was again the chosen venue. after the great success of the previous two trips it was difficult to consider another venue. I’m still chasing a large conger, and after dropping a fish next to the yak that was around 35/40lb, my appetite has been well and truly wet.

Despite the tides not being ideal (they were neaps) the weather for this time of year was quite simply stunning. Temperatures of 12 degrees and wind of 5-6 mph made for a cracking day. 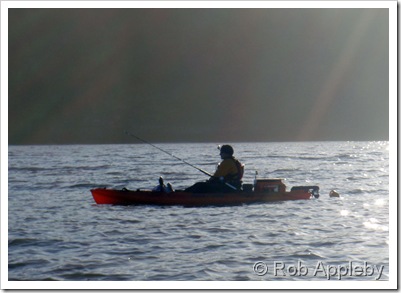 I chose not to paddle too far and fished a mark relatively close inshore, a mark that has produced before. It’s not necessarily about paddling miles to reach a productive mark, many good marks are close inshore so why paddle excessive distances?. I was soon anchored up in around 10m of water fishing the last couple of hours of the flood tide. 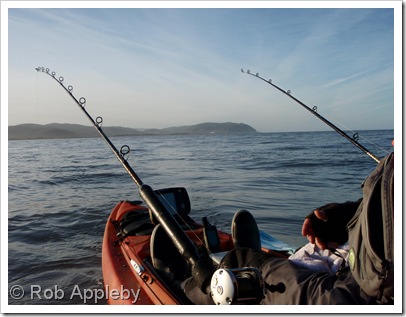 As mentioned in previous reports, the flood seems to run considerably lighter than the ebb allowing me to initially get away with using a 4oz weight. Baits were fillets of mackerel and double squid on 6/0 pennel rigs. Target species were conger and ray with the outside chance of a decent cod.

It was a quiet 30 minutes before the first bite appeared. 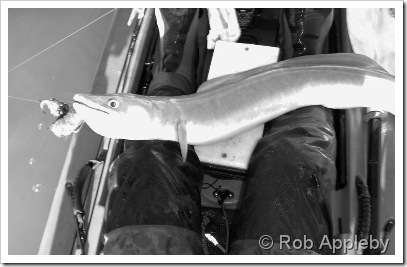 A reasonable conger for the first fish of the day. The squid was seeing very little action compared to the previous trips and the Thornback rays were very thin on the ground. That being said the sport was steady throughout the day with Conger Eel making up the majority of the catch with a handful of Dogfish thrown in for good measure.The eels were generally around the 4-8lb mark with the odd bigger fish thrown in for good measure. 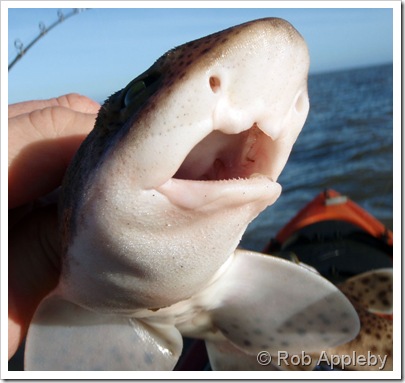 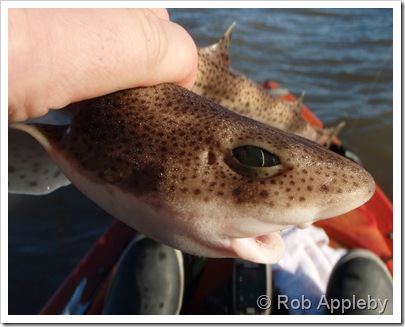 The Conger Eels provided good sport on both rod setups (6/8lb and 20lb). Though as the tide ebbed the current increased considerably and the lighter rod struggled with larger fish in the strong current. Neither was it such a pleasure to use with weights of 6-8oz. I’m looking to purchase two new rods this month. Again they will be Shimano Beastmasters, though I'm totally undecided as whether to go for the 10-15lb or the 16-20lb models….. 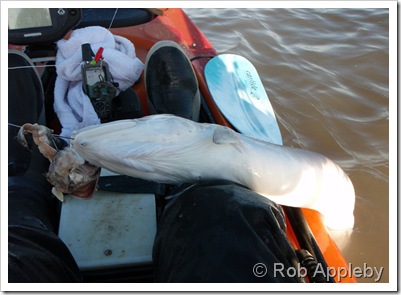 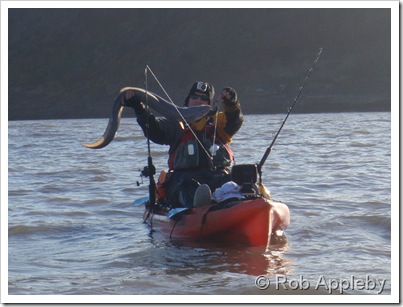 Sadly there were no large eels caught, nor large Rays or Cod for that matter. Though it didn’t really matter, after such a long spell off the water all that mattered was actually getting out, good fishing is just a great bonus.

The best fish of the day is below. I didn’t get the opportunity to lift it out of the water as it managed a lightning escape. 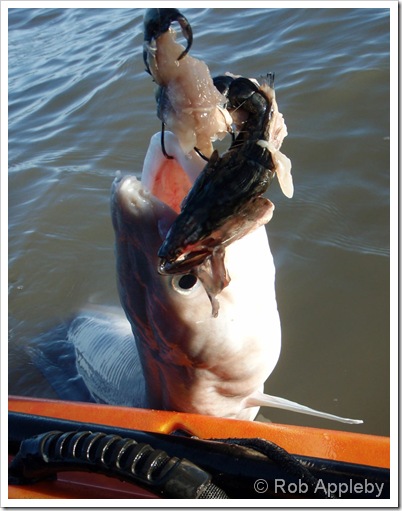 After watching the sunset I fished on for another thirty minutes before calling it a night. 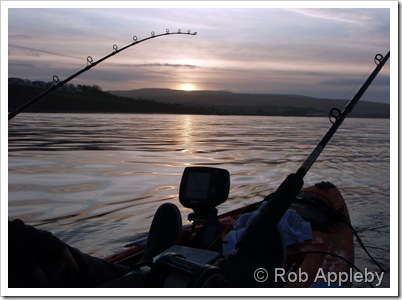 I played around with my Helmet Hero head mounted camera again throughout the day, this time with a bit more success. The only real downside is the lack on a confirmation sound when selecting the unit ON/OFF. This sadly leads to the occasional missed video clip, which no doubt will prove infuriating at some point in time !

Some video footage of the day

Hopefully I’ll be out again within the week, watch this space.

Glad to see you got out! Winter here means 3-6m swells, so not much saltwater fishing to be had. There WAS a break yesterday at 1.5m swells, but, of course, I was forced into making a paycheck, so I missed out. Hopefully I'll have another chance before summer. At least I still have great freshwater fishing!

I dont mind big lazy swells spread over longer distances, though sharp choppy swells over a metre or two make fishing rather unpleasant at times.

Yes, that freshwater fishing does look great!.. how much to pitch a tent on your lawn ? :)

Hi Rob!
What was the reason to buy the Helmet Hero? The Olympus camera is able to record video or not? The wide-angle? Easier to fix somewhere to making movie?
The kayakangler from Hungary

Hi
I purchased the Helmet Hero for two reasons. As you stated it's very wide angle is ideal for getting a good view of the action on the yak. Secondly it allows easy hands free head-mounted operation as well as other mounting options if required.

The trouble with mounting the video facing you is that I reckon most of the action will be missed. Ok, the picture quality isn't stunning, though it captions the scenes fairly well. It also came in a housing that is submersible to 30m so it's unlikely to get damaged in the kayak environment.

I'll keep on using it for the foreseeable future in order to get a good feel for it, perhaps I'll stick with it or give up on the idea. I do like the extra dimension it gives on the reports though.