It’s ages since I’ve fished, mid-October to be exact. Work’s being keeping me way too busy for my liking. so I was hopeful that the Christmas break was hopefully going to provide a much needed opportunity to wet a line. Things weren’t going well with blankets of snow covering most of the country and temperatures well below freezing. Needless to say I stayed indoors and enjoyed the Christmas festivities with my family.

Post boxing day the weather was improving rapidly, the snow was either gone or disappearing fast and the temperatures were forecast do be a dizzy 8°C !

Plans were made for a two day trip to fish the Bristol Channel with my fishing mate Jim, overnighting locally at my place of work. The venue was the Blue Anchor which has produced so many good fish for me over the past two years.

We arrived about 7am and were soon rigged up for a 8am launch. The weather was great for this time of year, with little wind and relatively ‘warm’. The spring tides had peaked 3-4 days earlier though there was still plenty of water coming through the Channel.
We paddled out and fished the area in and around the reef, first baits hitting the bottom at 8:30am. 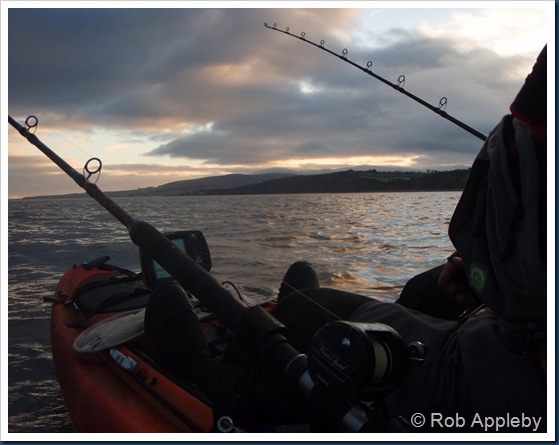 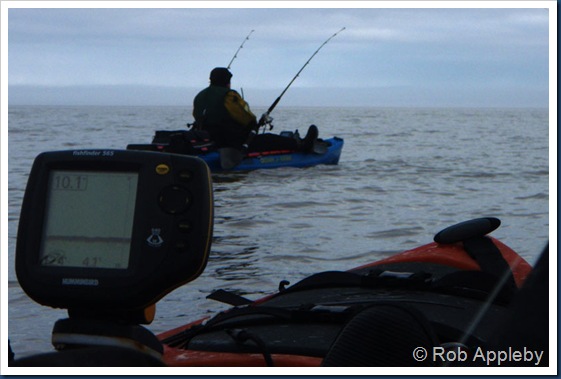 Baits were a mixture of squid, ragworm and mackerel mounted onto 6/0 pennel rigs. The fishing was pretty slow to say the least, though there was the occasional bite on each rod, nothing solid though.

The water temperature was the coldest I’ve experienced here, measuring a rather chilly 3.8°C. The cold water has certainly pushed the rays and conger into deeper water, though we persevered in the hope of a decent sized Cod. 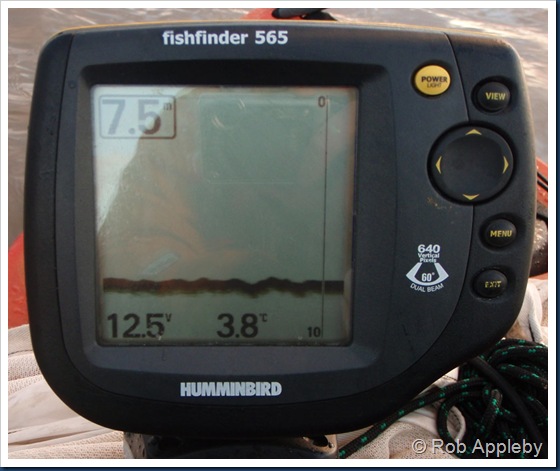 I eventually hooked into a fish, nothing large though it saved a blank!. It turned out to be a plump codling of around 2 ½ lb. It wasn’t really worth keeping so it was released to fight another day. I was soon into another fish of a similar size, though it came off at the surface. 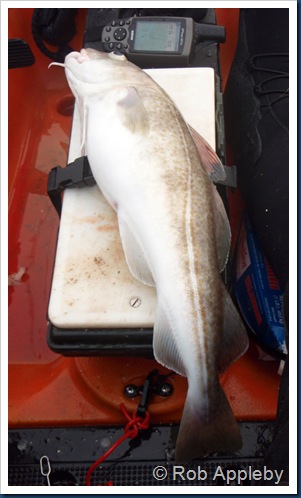 Slack water was uneventful, not a single bite until the tide turned onto the ebb and the current picked up. Despite the odd knock I failed to connect into any more fish. Though I was hardly complaining, it was a great day to be out on the water. 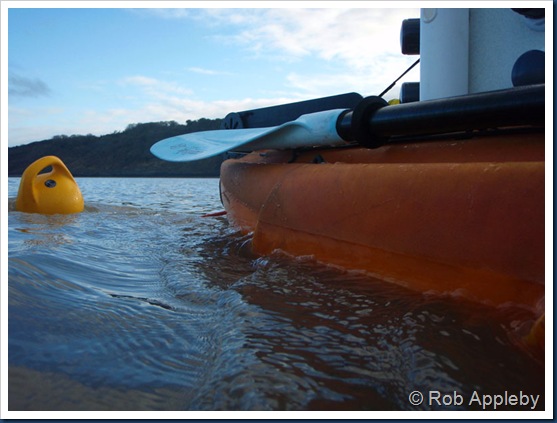 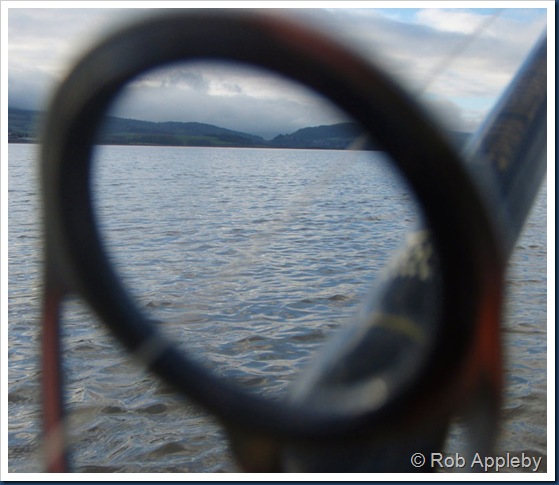 We fished three hours on the flood and about three into the ebb with four fish between us. A lazy tide-assisted paddle back to the beach bought a close to the days session, no complaints whatsoever.

DAY 2
It was another early start, up around 5am for a spot of breakfast prior to driving the hour or so to the Blue Anchor once more. Again, it was another misty morning, though thankfully it didn’t slow our progress too much.
We decided to fish further offshore in the hope of getting into some warmer water which would hopefully prove to be more productive. We paddled a couple of miles and dropped anchor. The water was deeper and as expected the current was considerably stronger, but more importantly the water was warmer, a heady 6.6°C ! 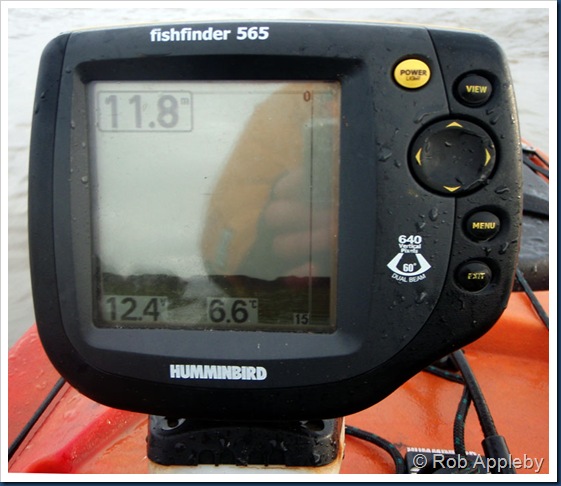 Watchet harbour is tidal and the charter/private boats can’t launch until about 2 ½ hours before high water. As we’d launched at the Blue Anchor we were on location over and hour before a boat appeared from the harbour mouth. On the reef you can generally use 4oz of weight on the flood, here in the deeper water 8oz was required.

It was about three hours into the trip that something happened, something that’s never happened in my three years of kayak fishing..  I needed the toilet, badly.. and it wasn’t for a pee. This wasn’t good and situation became unbearable. I unclipped my anchor and paddled the mile to shore in record time.

On reaching the shoreline I now fully understood why I’d been listening to waves crashing against the cliffs all morning. It wasn’t good with 3-4’ swells crashing onto a steep shingle beach. I had little choice and managed to make an exciting landing, though I was dry so it was all good. 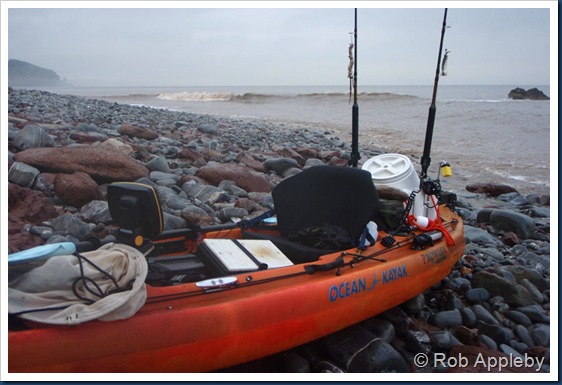 Whatever the record was my getting out of a drysuit and multiple layers of clothing, I smashed it!. It was an emotional moment… say no more. Toilet paper was lacking, though there was plenty of seaweed.. again, emotional.

The launch was nasty, the waves and heavy swell causing me a lot of problems. I was stood thigh deep in water struggling to hold the kayak in the water, though I brief respite in the wave action gave me the chance to make a launch, albeit somewhat wet as I caught a set of waves once I’d started paddling. A paddled the mile back to my buoy, hooked back up and started fishing once more. 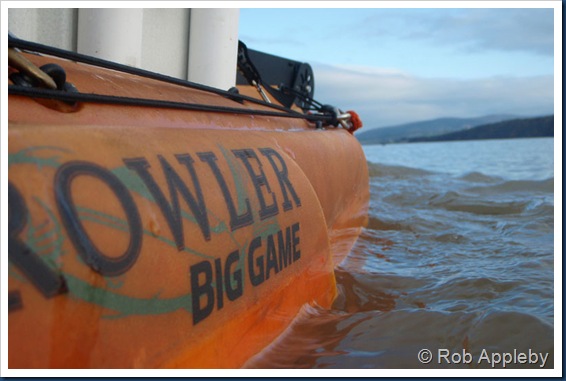 The fishing was slow, though I did manage a couple of small codling around the 2lb mark. I pulled anchor and moved down tide back towards Jim and anchored up. Trouble was that I didn’t anchor successfully, the weak link had snapped and I was heading down tide at around three knots. I tied on another link and dropped anchor. That weak link broke instantly and clearly couldn’t cope with the tide run. I had no more link so tried a length of 100lb line… that snapped. Somehow I managed to tangle my loose anchor warp during the last drop so I called it quits for the day.

I called up Jim on the radio to let him know that I was heading back in. He was ecstatic, apparently he’d landed a Cod that he estimated at around 28lb!

The paddle back to shore was a rapid one, for a time I was travelling at 6.7mph with little effort!, who said that Big Games are slow ?. I arrived back at the beach and met ‘Oggy Bong’ and ‘Dizzyfish’ from the Anglers Afloat forum. Nice guys, hope to see them on the water again soon.

Jim returned to the shore a short time later sporting a huge grin. He dragged his beast out of the centre hatch, what a fish!! 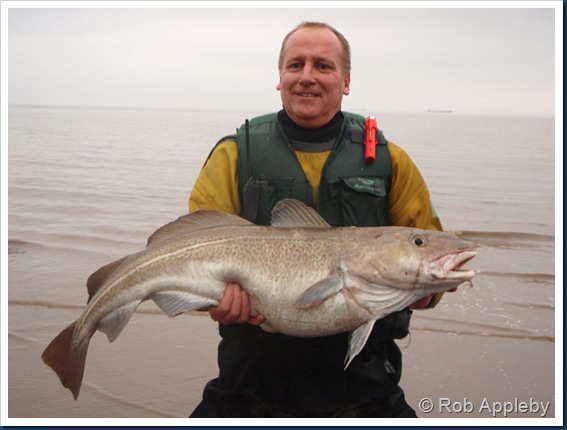 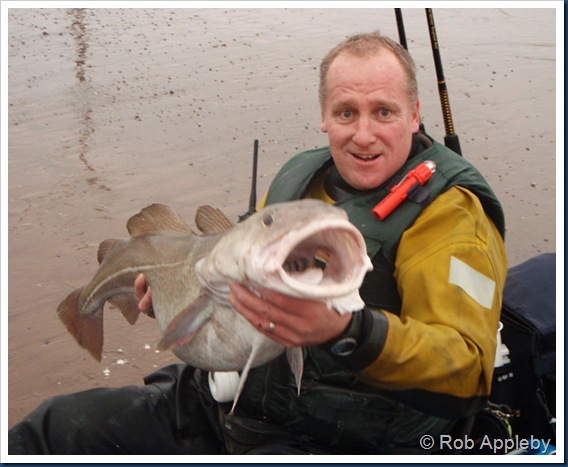 It weighed in at a heady 26lb 3oz, and I thought my fish last year of 21lb 2oz would take a lot of beating!. Guess I’d better get back on the water and start putting some serious time in !!
I finally managed to try out my new Chota Mukluks, and they are simply fantastic. Easy to put on and take off, and they kept my feet warm enough during both days (even the drysuit legs and socks within were bone dry).

Previously, my feet would get so cold that it would stop me fishing, and walking on them would be like walking on two huge puddings. Those days are long gone, money very well spent!. 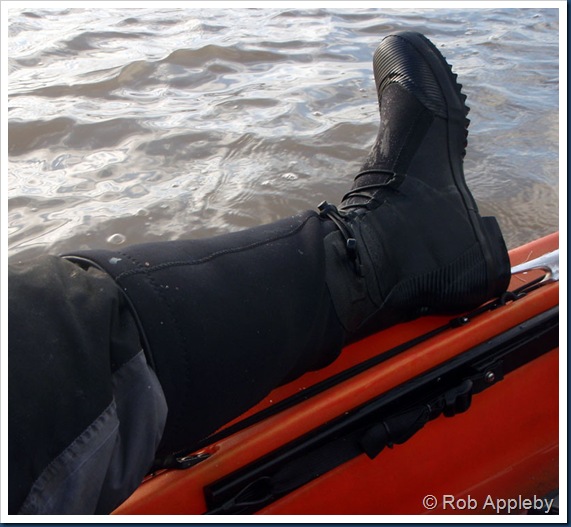 The overhauled Shimano Charter reels were back in action and working well, the new drag washers being smooth and progressive.

What a great couple of days on the water, the weather was great for this time of year. I’m happy with my new gear and I was there to witness the capture of a truly cracking fish. Well done Jim !

Blue Anchor – Getting there 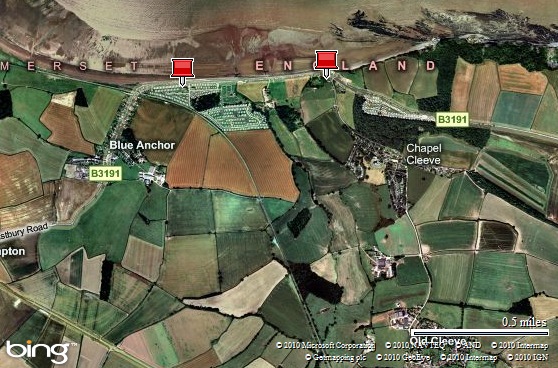 Great report Rob and what a fish for Jim!

Cheers Andy. Yup, it was certainly the fish of a lifetime.

A very interesting and, amusing story.

Nice Report Rob i look forward to trying the area out myself in the near future as i have a Prowler on order but need to learn the ropes in an easier venue for a while.And Jims Cod has the WOW factor!...Regards....Tony..

Hi Tony. Lots of practice in a calmer area is the way to go. Once you're very confident with anchoring and recovering your anchor, you can safely venture into more turbulent waters.

Would you describe the 6/0 pennel rig to us Yanks? Probably make a great post in and of itself. Have y'all (that means all of you) tried out circle hooks yet?

When I get home for R&R, I'm getting a 'Yak for my son Blake, I know he will get a ton of use out of one!

Great read Rob, well done on the emergency. What a briiliant fish your mate landed, bet he`ll never forget it.