The last couple of weeks has been pretty poor weather wise with firm north easterly winds being the norm. They finally swung about to a lighter south westerly breeze on Sunday. I was unable to hit the water that day, though I made plans for the Monday and a day off was duly booked.

I’d managed to book a pound of fresh lugworm from the tackle shop in Watchet. High water was 5pm and despite running a little late, I was on the beach ready to launch shortly after 1pm. 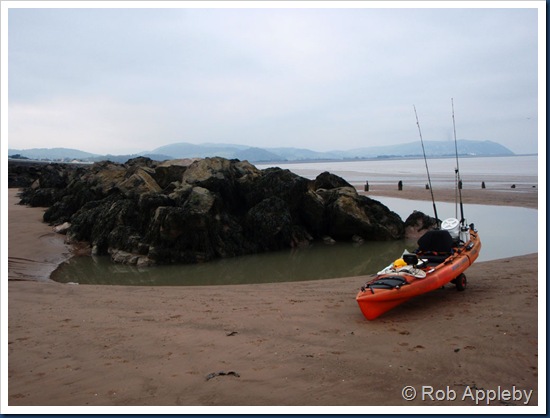 Conditions were just about ideal, not too far from millpond conditions, though these were actually achieved later in the day. I paddled straight out into deeper water until I found a good run of tide before turning and paddling eastwards for almost two miles. I was anchored up about a mile offshore with baits in the water by 2pm. Baits for the day were either lugworm and squid or mackerel and squid, both mounted on a 6/0 pennel rig. 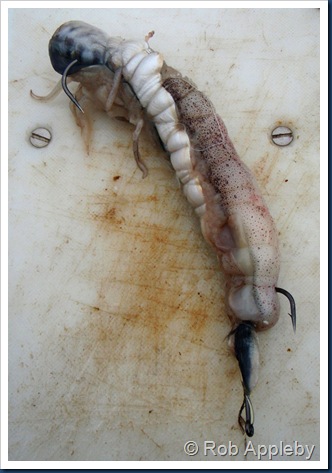 The first 20-30 minutes were fairly quiet with only the odd knock here and there. The codling finally started to appear, all a reasonable size, and with a running tide it was good sport. 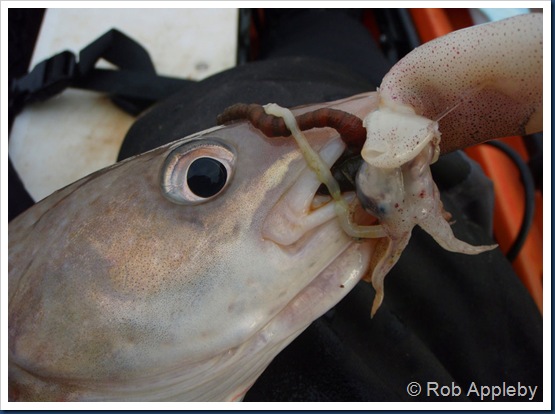 The sport continued through the flood and the action was pretty much non-stop. At times there were bites on both rods which made for pretty exciting fishing ! 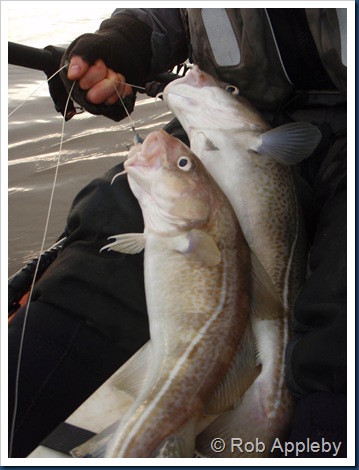 The mackeral/squid combo was working well and resulted in four thornback rays coming being picked up during the flood tide. They were a decent size, the best fishing pushing double figures. They fought well in the running tide, at one point I was convinced I was into a double figure cod, though this hope was quashed when the fish surfaced. 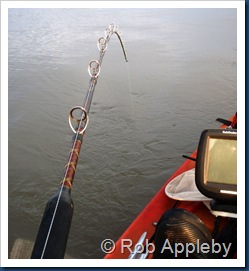 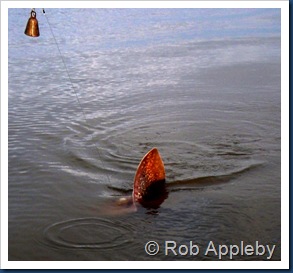 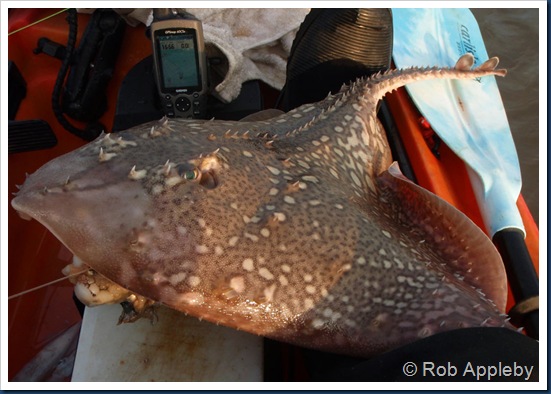 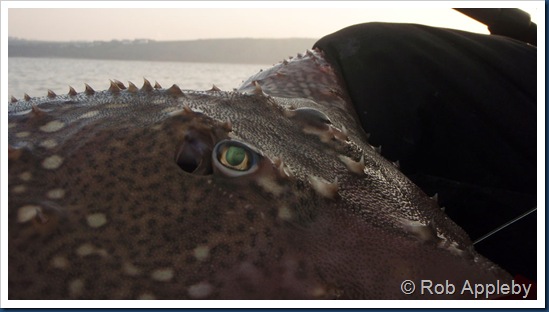 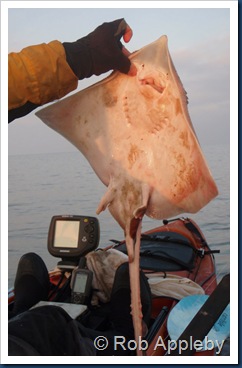 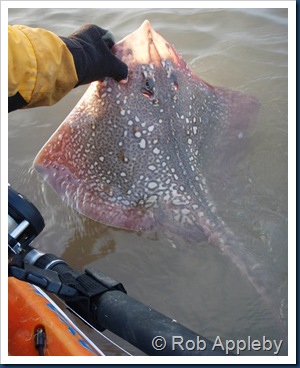 It was pretty chilly despite the sun making a show from time to time. The prevailing wind eased off completely at times giving an oil slick appearance to the water surface. When I launched the air temperature was 1˚C and it never got above that throughout the session. In fact it dropped well below zero as the sun dropped behind the hills. 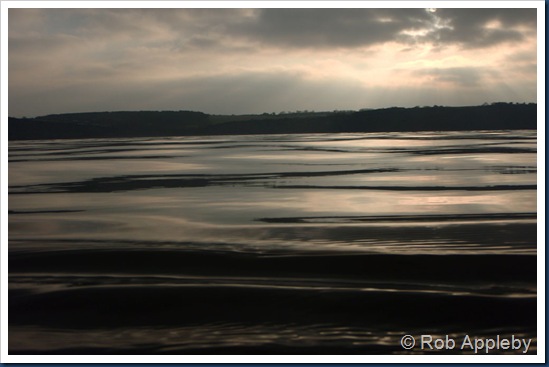 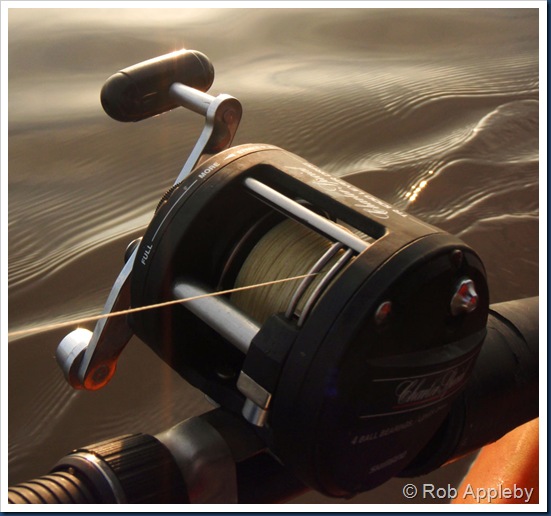 As high water neared the sport eased off, no real surprises there. I was still picking up the odd fish even at slack water which was a little surprising, though I was hardly complaining. 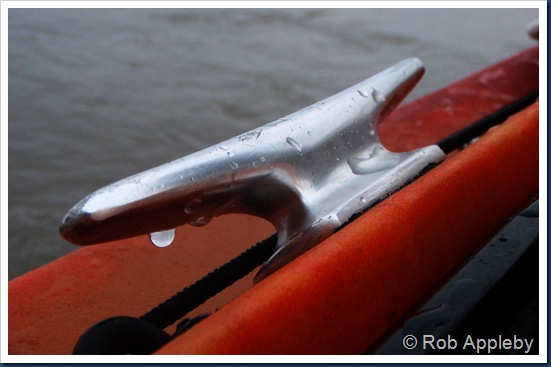 As the sun set the tide turned, it was a time to enjoy the best that mother nature has to offer. I do love a good sunset..  it was also time to light up as dusk approached rapidly. 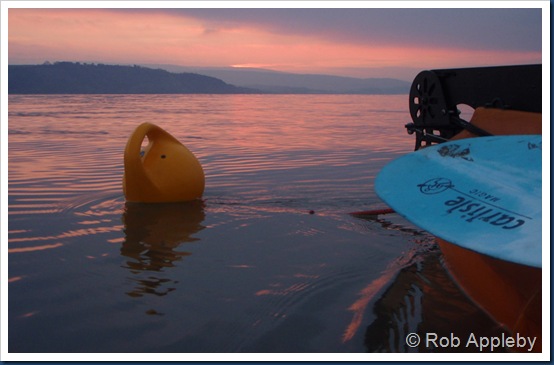 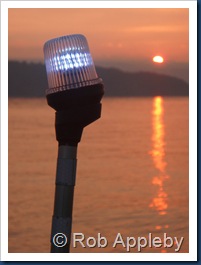 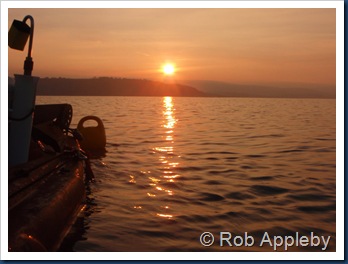 Once the tide tuned onto the ebb the fishing picked up once more, though the codling were taking a back seat as the whiting were hitting the baits hard. I took five fish within ten minutes, though as soon as they’d appeared they were gone. 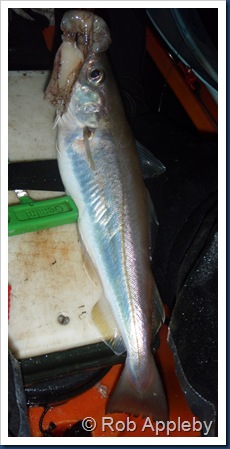 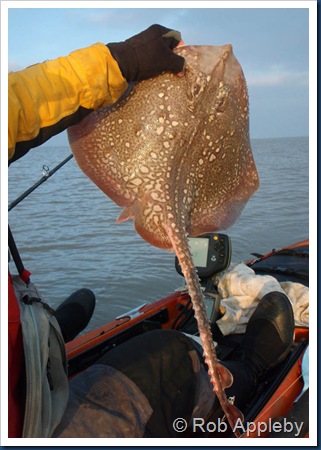 The tide was ebbing hard, for a time there was standing waves next to the kayak. On the flood I was using 8oz of weight to hold bottom, though the ebb saw me going to 12oz, though I was soon onto a 1lb of lead. The tide was quite fierce, debris on the surface of the water was taking roughly two seconds to pass by the length of the kayak. The anchor was holding and I was happy to stay put !. 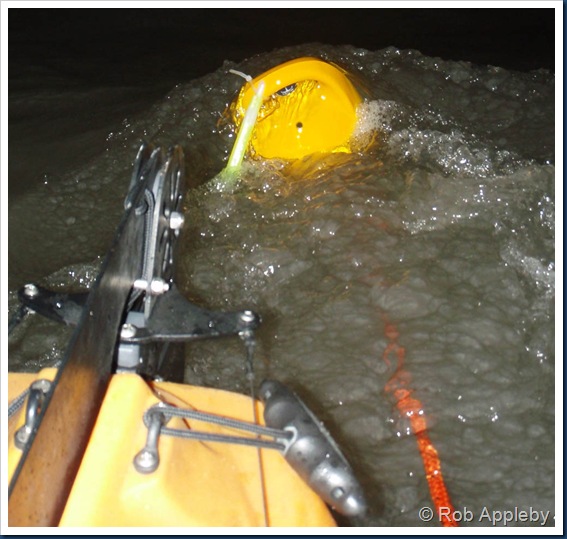 The fishing didn’t amount to much on the ebb. I was getting the odd hard bite, though it rarely developed into anything. I did manage three codling post the whiting fest, though they was smaller fish than what I picked up on the flood tide.

I fished three hours of the ebb tide, finally raising anchor at 8pm, paddled back with the tide. Despite a very leisurely paddle I was still averaging over 5mph. I hit the beach around 8:30pm and cleaned my catch. The codling contained small edible crab which seems to be the norm for these parts, though one codling was stuffed with whitebait. When I reached the car it was showing –3˚C… and it felt it ! 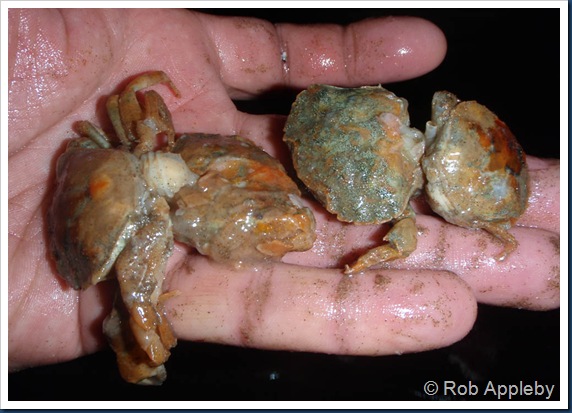 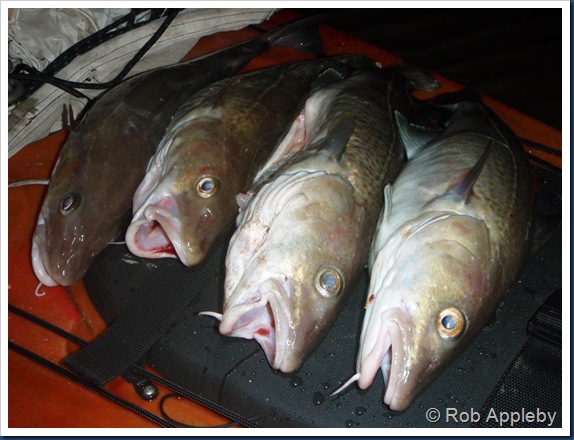 It really was a cracking session, one of the most enjoyable in a long time. The fishing was excellent, I managed around twenty codling from 2-5lb, four rays and a few whiting. Though it wasn’t the fishing, it was the weather, the time of day and the atmosphere out there that made the session so enjoyable. I’d like to hit the water again tomorrow, perhaps I will, though the weather is due to pick up.. I’ll have to wait and see what the morning brings.

Great trip Rob , some really good fishing , fished on sunday at sully on the kayak , had a couple of codling ,it sure is fishing a lot better at blue anchor and watchet must have a trip over there before the scallywags push off , again well done

Hi Greg, where are you based ??

Howdy from Texas, Rob.
Came across your blog for the first time today. Great report and awesome nice pictures that you have posted here.
Rays are exactly what I hate getting on the hook. Since I have seen some pictures of people they got hurt by getting stung by a ray, I handle them with least 20 times more careful than ever before. LOL

Based in cardiff Rob, fished a few times over at blue anchor in the comps , always fished with the golf links behind me. some great shore fishing to be had there. have a boat as well but to fight fight a fish off the kayak is some thing else , kind of levels the playing field out a bit.

Wow, a session and a half I would say. I will have to brave the elements and get out soon. An inspirational report

Good to see you GOT SOME!