Plans had been hatched for myself and Matt Boast to meet up and fish Llangorse Lake in southern Wales along with a couple of other fishing enthusiasts. They would be fishing from a Skeeter boat with plans to shoot some video of the weekends fishing. Myself and Matt were on kayaks, me on my new Hobie Outback and Matt on a PA12 that had previously seen action in the Hobie Fishing Worlds in the Netherlands last year. 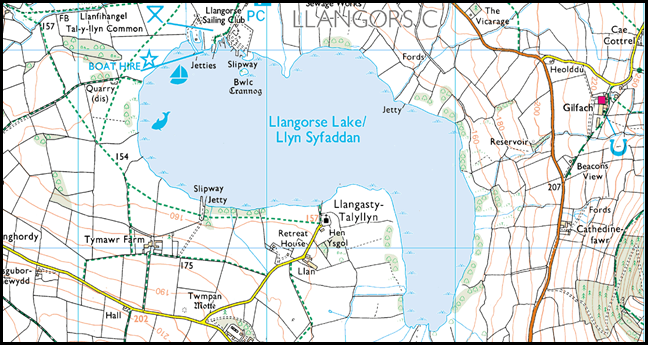 I’d looked at the forecast earlier in the week and well, lets just say that it was grim. Brisk winds, rain and low temperatures were forecast, not exactly the sort of weather that gets you excited about getting afloat. However, as the week progressed the outlook brightened somewhat, with the Saturday at least looking quite fishable.

The plan was to camp out on Saturday night, however, I really didn’t fancy sorting out a tent in what was likely to be rainy weather. Plus I’ve recently moved house and I’m still having difficulty in finding everything!. So the decision was made to sleep in the back of the car… I’ve done worse.

It was going to be a good opportunity to check the recent rigging of my new 2015 Hobie Outback. It’s still not finished as there’s RAM rod holders and a rectangular hatch upgrade to carry out, but it was good enough to get me out there fishing. I’ve also fitted a Lowrance HDS7 Gen 3 to the Outback and this trip was going to provide the chance to give the new setup a good shakedown whilst checking out some of the capabilities offered by the new electronics unit. I say some, as I’m still awaiting the Structure Scan transducer.

I’ve fished Llangorse lake before at this time of year and I was expecting the fishing to be difficult and the weather somewhat unpredictable. Anyway, I was on the road for 0500, rendezvousing with Matt for breakfast at McDonalds, not too far from the Lake. We weren’t in any rush and hit the water at around 1000. 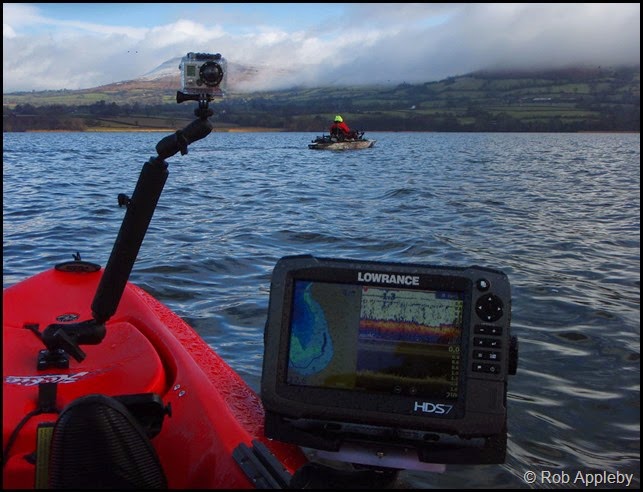 As much as the priority was to fish, I was also looking to record my sonar log which would be uploaded later to the Insight Genesis website. This would permit the existing map of Llangorse Lake to be updated with my own sonar log data, thus improving the map that’s available for many Navionics users to utilise. It was also extremely handy as most freshwater venues, Llangorse included, are not featured on my Navionics Gold card. So to stop me fishing blind, I downloaded the Insight Genesis chart for the area and loaded it into my HDS7 on a micro SD card. The image below shows the chart that was available for the Lake. It wasn’t fully logged, but more than sufficient to give me some great direction. 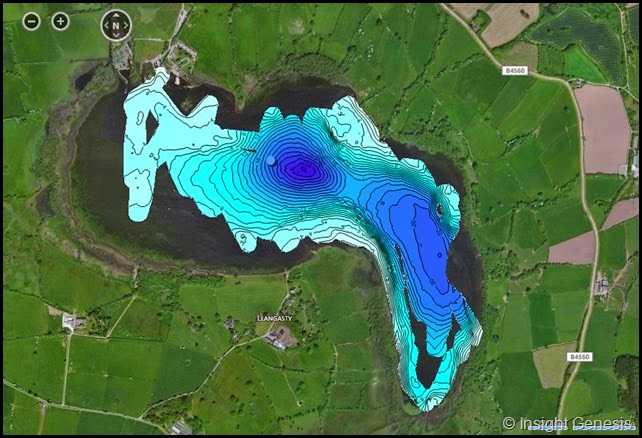 Selecting that chart was easier than expected, a single tap on the screen (yup, touch screen!) provided me with chart options. Tapping that gave me the option of Navionics or Lowrance. It had defaulted to Navionics and the 7” display was blank, though a tap onto the ‘Lowrance’ option resulted in the Insight Genesis map filling the screen… brilliant!.

The plan was to troll the drop offs and shallower areas of the Lake, heading to the deeper areas if required. I’ve enjoyed some success at Llangorse previously using dead baits, however, lures were the chosen fishing method for the weekend.

The scenery here is stunning and a little sunshine allied with some low cloud over the hills produced a lovely backdrop. The sides of the Lake are bordered by reed beds in most areas, the whole place does scream fish. However, the fishing was proving to be difficult! 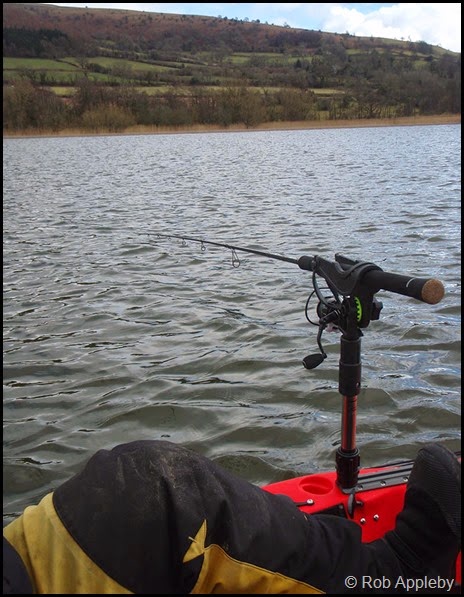 I’d previously fitted Scotty rod holders and extenders to the GearTrac on my old Outback and I carried that design over to the new model. It’s the first time that I’ve used them for any real length of time, they were in non-stop action over the whole weekend. I like to hold a rod when trolling, though when the action is slow (and the temperature freezing!) it’s nice to be able to place them in a convenient rod holder that’s nicely angled for trolling.

There was very little fish activity with me only managing three hits throughout the day, one of which resulted in a brief hook-up for a few seconds. Matt on the other hand shouted over and I could see him holding the landing net in the water so I knew he had a fish. It was a nice fish as well, lovely condition and beautifully marked. 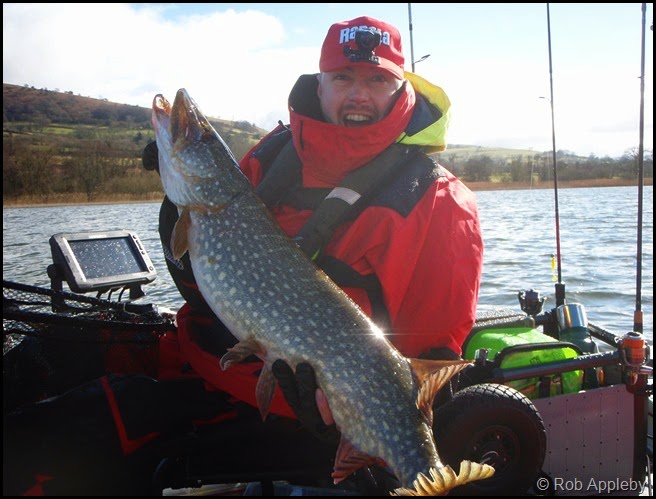 The guys on the Skeeter had managed a jack pike, it was tough fishing. I did see some good sized fish returns hard on the bottom from time to time, most likely Pike, though I had no success in provoking any further strikes. However, the quiet fishing permitted me to start experiment more with my new HDS7 Gen 3 combo unit. I’d set into in split screen mode, three screens to display mapping, broadband sonar and down view. I do love the structure detail offered by down view, though I like to have the broadband next to it to highlight fish returns. Down view (down imaging) isn’t great for showing fish returns, though the shallow the water the more prominent those returns can become.

On previous FF/GPS units if I’ve wanted to get a picture of something on the screen I have to grab my camera quickly before it disappears off the display, something that was alleviated somewhat with the TrackBack feature on the Elite 7 HDI. Though screens are reflective and I always get my reflection showing on the screen, not good. The HDS has a feature where you can press two buttons together and it stores a screen shot which can be removed from the unit via the micro SD card. For me, this is a lovely feature to have. Here’s an example below. 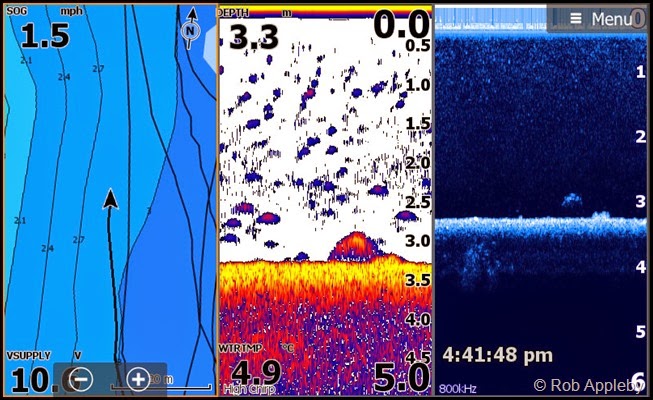 There appears to be a pretty good fish return on the broadband sonar (set to High Chirp) with a corresponding return on the down view. I’d guess that it’s a Pike sitting close to a piece of structure.

I tried the multiple modes that are available with the standard 75/200Khz transducer, though I’ll look at these in more detail in a later article one I have the structure scan up and running.

The new Vantage seat that features on the 2015 Hobie kayak range is very comfortable and a real step forward in seat technology. Again, I’ll look to review the new Outback in great detail very soon, though I’d like to clock up a few more trips before I do so. 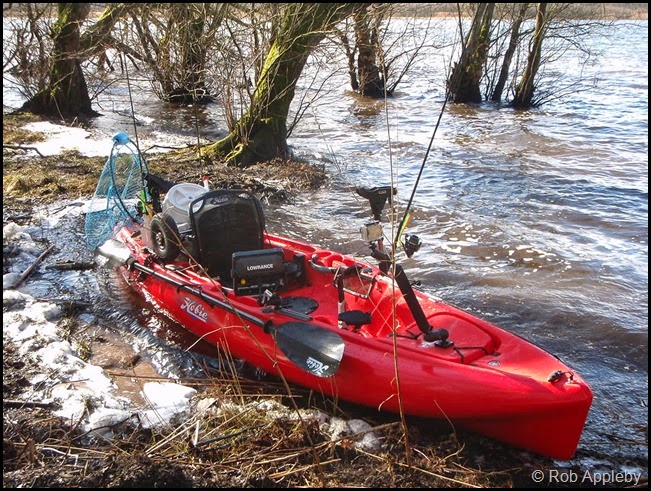 That pretty much wrapped up the Saturday so I watched the guys rig their tents in the dark, sleeping in the car had seemed to be the logical choice. The rest of the evening was spent enjoying some lovely food and a couple of drinks the the local pub before retiring for the evening. Ok, so it was a little compact in the back of the car, sleeping next to all my gear, though with the seat down I was able to lie flat. With a roll mat to keep me off the floor I slipped into my military artic sleeping bag. I’d taken the liberty to slip into my Weezel Extreme under suit first… yup, the night was a warm one!. That said, I woke to the car rocking from side to side, Matt was up early and keen to get afloat!. I could barely make him out through the window, though I soon realised why, all the windows were frozen solid on the inside!. I’d left the windows open slightly to keep condensation to a minimum… FAIL

The Skeeter boat behind had a nice layer of ice all over, deep joy! 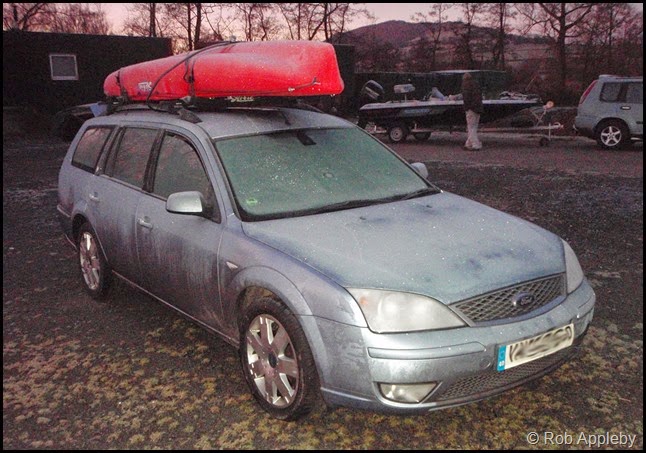 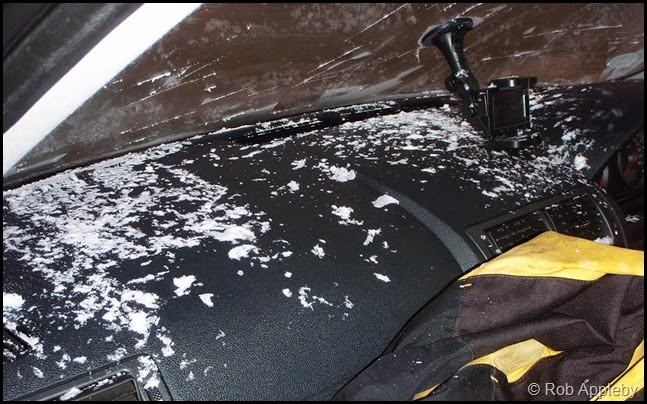 So with the windows scraped clean of ice on both sides it was time for breakfast followed by some fishing.

Sunday was a lot colder and it was keenly felt  once afloat. The wind and rain picked up as the morning progressed and conditions become rather miserable. I continued to troll, going with the wind was pleasant enough, the hood of my PS220 drysuit keeping the elements at bay. However, there came a time when I was forced to turn around and had to take the brunt of the weather face on. 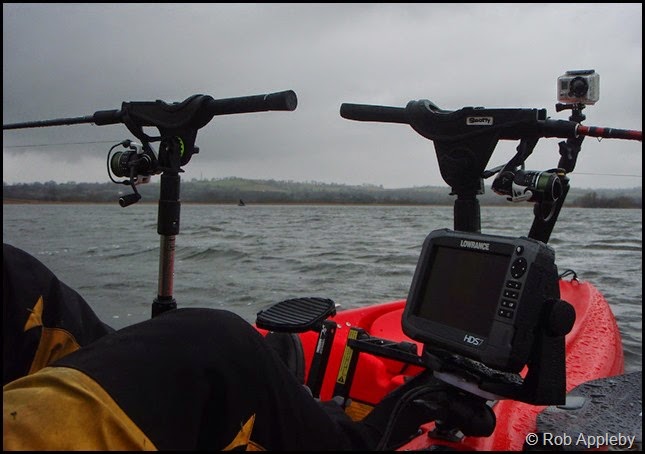 I could happily drift downwind at around 2mph, steering with the rudder,, trolling few a few hundred meters with zero effort, though it was a different story going into the wind!. I tried several lures, weighting them carefully to ensure that I was fishing very close to the bottom. Though the pike proved elusive for me. The chaps on the skeeter managed a couple of small jacks, the fishing and conditions were rather difficult!

That said it was a very enjoyable weekend with a great social. Meeting new anglers is always good, as was spending some time afloat with my Hobie Team mate Matt Boast. It also proved a successful opportunity to shakedown my new 2015 Outback, testing out my recent rigging whilst getting to grips with the HDS7.

Over the next week or so I hope to complete the rigging of the new Outback and to start familiarising myself with Lowrance’s Structure Scan. Though there’ll be no time to take a break as I’ve just heard that my 2015 Hobie Adventure Island has reached the Netherlands and will be with me very shortly. More rigging and lots of sea trials will be needed!