For over a year now I've been using a Stohlquist Fisherman PFD, purchased along with my kayak and other associated gear. I've had no problems with the Stohlquist, though as I've purchased additional kit over these past few months I've found the Stohlquist lacking in storage space. This came to a head a few weeks ago when I purchased a handheld VHF radio, only then did the search start in earnest for a replacement PFD that would fulfil my requirements.

I was looking for something comfortable to wear whilst seated in the kayak, lots of storage space, plenty of buoyancy and it had to provide a good amount of visibility. For a change I wasn't particularly limited by my budget.

The more I looked, the more despondent I became as nothing out there seemed appealing to me. I considered the Extrasport Osprey which had been a consideration prior to be purchasing the Stohlquist. Another option was the Extrasport Striper Angler. After much research and reading of online reviews I finally decided on the Palm Kaikoura Tour. This is my review. 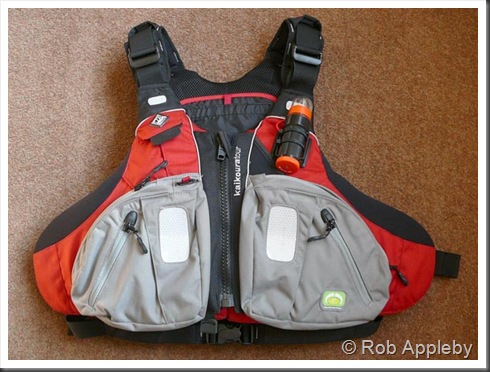 This PFD utilises Palm's Flex Formed Foam system which is supposed to offer excellent comfort. There are seven pockets in total with the provision for a hydration bladder and a handheld VHF radio. It was available in red or blue, red being the obvious choice for visibility at sea.

I purchased the XL size to allow for my drysuit plus multiple layers of clothing beneath. In this size it provides 70N of flotation as opposed to the Stohlquist's 50N. This does however make the Palm a little bulkier, though I haven't found this noticeable whilst on the kayak. The material is Cordura 550D Ripstop which should prove to be extremely durable.

Adjustment comes in the form of a waist and midriff straps as well as shoulder adjustment. Further adjustment whilst actually wearing the PFD is simple enough. A front zip design allows the Kaikoura to me removed on the water, to remove a layer of clothing for example. The remaining loose from the front straps even tucks away into small recesses so there's less clutter of the front of the PFD. 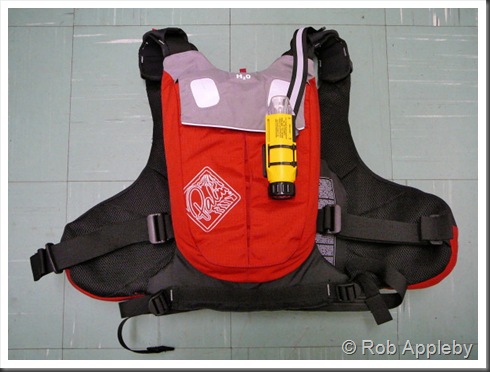 On the rear of the Kaikoura is a large pocket, designed for a hydration bladder, with the shoulder straps containing loops to keep the drinking tube organised. There's also an accessory mount to which I have mounted a strobe light. 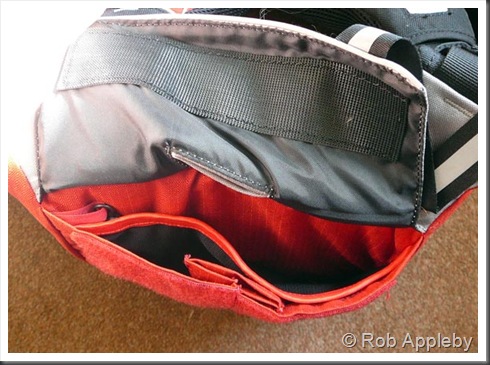 The rear pocket is also sub-divided to allow for alternative storage, perhaps for flares, etc. This pocket has an over the shoulder opening strap which proved simple enough to operate. I have doubts as to how accessible this pocket actually is on the water, no problems if your flares are laying upright, though if they were lying flat retrieval would prove rather difficult!

Storage on the Kaikoura is superb and is one of features that has led to the praise within the sea kayaking community. The front of the Kaikoura has four pockets along with fleece lined hand warmers and a whistle pocket. The two main pockets contain pouches and key clips. The smaller front bellows pockets also contain key clips, whilst allowing the storage of smaller items. 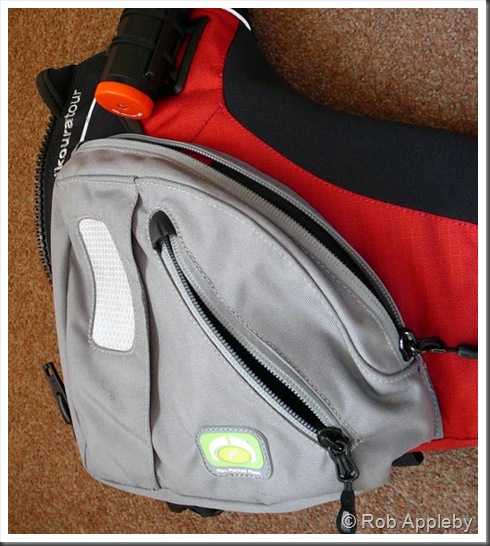 What is difficult to see is the hand warmer pockets, the two main pockets can be clearly seen unzipped in the above photograph. the hand warmer pockets actually lie behind the rear most pocket, the complete upper side of the pocket assembly is un-stitched allowing access to a fleece-lined pocket. I've used them over the winter period and they are indeed effective, getting your hands out of the wind, allowing them a chance to warm up. 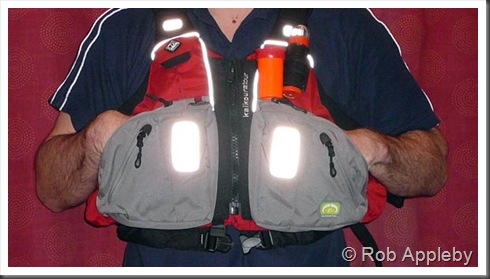 For these hand warmer pockets to remain effective it's well worthwhile drying your hands prior to using them. I've even kept a solid fuel hand warmer in each pocket for the ultimate warming experience!!

Left, right and rear pockets had a reflective SOLAS patch on them - an increasingly common addition to paddling kit and useful for dawn/dusk and night paddlers.

The right hand pocket has an antenna hole in the large rear pocket allowing storage of a handheld VHF radio within. The hole on mine was partially obscured due to an excess of material when purchased, though careful trimming and a few re-enforcing stitches made it fully effective. It can prove fiddly to fit the VHF in the pocket, though with a little practice it becomes quick and easy. 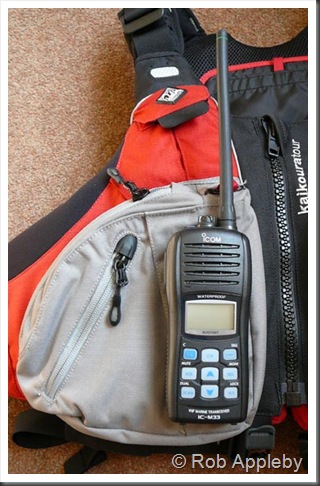 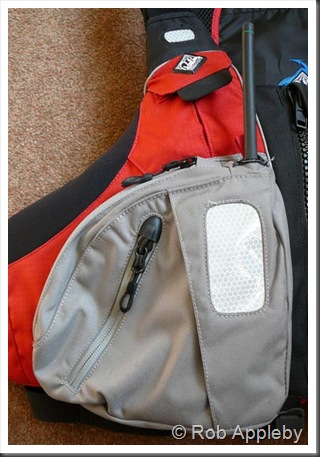 If you are unfortunate to capsize the radio is certainly not going to fall out, once on the water access and retrieval would be easy. Obviously a waterproof/floating VHF is advised. I'm currently using the ICOM IC-M33, review to follow sometime soon.

The Kaikoura has an flat, inside back pocket, which on the face of it has very limited use due to its position and size. However it could be used to located a £20 note, a little loose change and some handy phone numbers in a heat-sealed packet, should such an emergency arise. 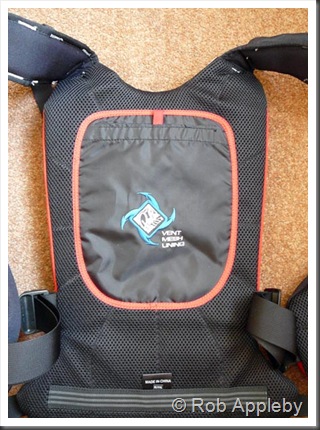 The last pocket is located on the right shoulder. It's a small pocket with D-ring and whistle already attached. I've also fitted a safety knife and lanyard into this pocket, though it could also be used to house a smaller torch/strobe for night time or emergency situations. 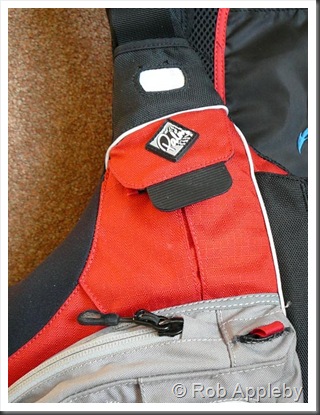 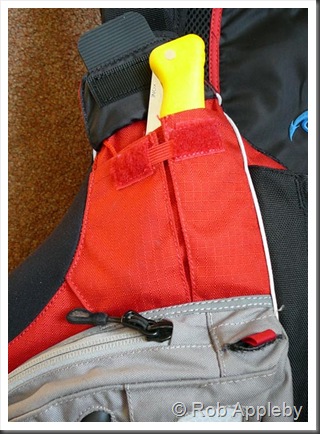 Above the left pocket is a plastic accessory mount to which I have attached a strobe light. 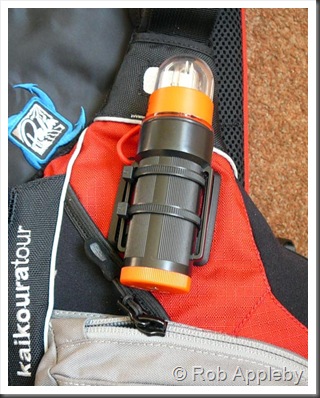 There have been issues regarding the Kaikoura’s zip and corrosion, though the design has been updated with a plastic zip and this problem addressed. If purchasing this PFD ensure it is of the more recent design with plastic zips and not part of an old batch.

I've been using the Palm for a few weeks now and early impressions are very pleasing. It's comfortable to wear and the storage solutions are proving to be excellent. Despite my initial concerns over its apparent bulk, it's proved not to be an issue on the water. The corrosion issues appear to have been put to bed.

Overall, an excellent piece of kit. At the time of writing this review the Palm could be purchased for approximately £100. Certainly not cheap, though considering the design and workmanship I believe it's worth it.

Most comprehensive review I found I may buy one of these, thanks for the info.

Thanks for review. been thinking about one of these.

Had been thinking of this model Thanks for very thorough review :) Orderd one today Thanks

Thanks for your comprehensive review I took on board your comments regarding colour, size and plastic zip.
Ordered one today.

Fantastic review. I saw one of these in a local canoe shop and it looked really. It may have been the old version because the price was well under £100

Nice review. Like the storage pockets. May buy one to use with the Sevylor Yukon I have.

i think the only choice is blue or red,i have being looking around for an up-grade,this seems to be the best on the market that i have seen for value for money.m

Nice review, saw them at REI and just love the lined pockets and radio features.

Nice review. How will this PDF fit with typicall tall back SOT kayak seat?

Have a plain NRS padling vest, thought not much room for gear, also the vest against the seat is not very comfy...

I personally dont have any problems and the PFD is now quite popular with SOT kayak anglers. I've heard no negative feedback to speak of. There are quite the array of seats out there, it's worth posting that question on a forum quoting your seat type. It's highly likely that someone is using that exact combination and is a good position to provide some useful feedback.

Thanks for your review and on the basis of your comments, I purchased a Blue version. I really like it

Since reading this review Ive had to find one to purchase and its everything you say it is, I have the red and black one and its a cracking bit of kit!!

I purchased one of these recently in a M/L size and it sits nicely just above the seat on my ocean scrambler 11. A relief after spending the summer with my previous entry level palm PFD digging in my back and riding up on the seat. Mini flares easily fit in the front left pocket. Can only be described as a great bit of kit but not cheap in the UK at around the £150 mark.

Great review, thankyou. This is the PFD for me !

Great reveiw Rob. Got one of these some time ago now one of the best things I've bought for the yak. confortable and easy to store most of your tackle needs, flares and lights.

Good review. Where did you purchase it for £100?