I'd still not fully recovered from the cod fishing trip last Sunday, though the weather for today was looking good. I'd organised my gear the night before and had a leisurely start to the morning, not hitting the water until around 0930.

Disappointingly it was far breezier than forecast and on arrival it put me in a wind over tide tide situation, something which I find a real pain!.


Plaice were the target species so two baited wishbones were flicked out 30m in front of the yak. Within fifteen minutes I was rewarded with a small plaice of around 1lb, very encouraging I thought.


However, this turned out to be pretty much the highlight of the day, I connected with another fish though it came off halfway back to the yak, frustrating.


The tide eventually turned putting the wind behind me, though the somewhat confused water resulted in me being pushed from left to right like a pendulum on a clock, the neap tide provided little tidal flow so the lines were constantly going slack, then back to taught, far from ideal.


The fishfinder showed a bit of activity on the bottom from time to time, might have been weed, though it provided some encouragement. 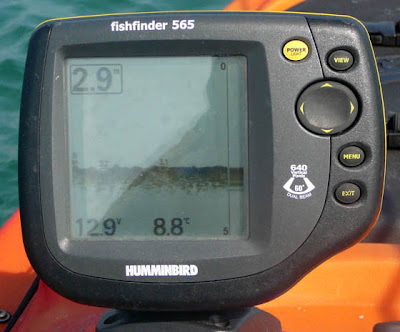 I removed one wishbone and swapped it over to a basic running ledger in the hope of picking up perhaps a school bass, or anything for that matter. This however proved totally fruitless.


As the morning went of the breeze picked up and it became positively chilly, resulting in my stripping down and pulling another fleece on. There were no further sings of activity and after about four hours I'd had enough, so I pulled anchor and made back to shore.


There were multiple anglers on the beach with not a single fish between them. I was cornered by a couple of interested chaps for twenty minutes before I made it to the car to de-rig. 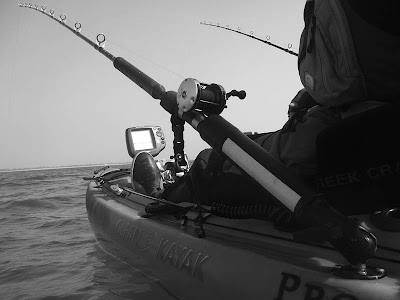 A rather disappointing trip, the weather forecast let me down, as did the fish. But it'd be boring if we bagged up every time, wouldn't it??????? ...
Please feel free to comment.
Email ThisBlogThis!Share to TwitterShare to FacebookShare to Pinterest

I keep telling myself a bad day of kayak fishing is still a good day of kayaking, and both are better than being at work.

Here's to us both getting into some fish soon!