Many months ago I purchased a trailer which I’d hoped would have proved suitable as a kayak trailer. It was never going to be that simple as it has to cater for other requirements such as general household duties, etc.

The trailer that I’d purchased earlier did on the face of it seem fairly suitable. 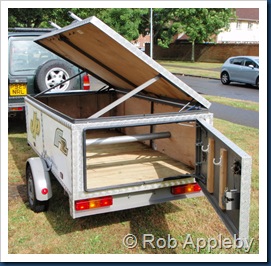 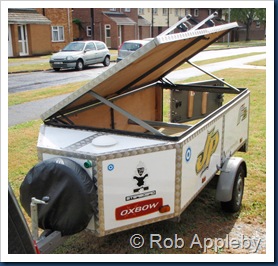 However various problems were evident at a fairly early stage. The lid was a massive one piece affair, though it was the nature of its construction that turned it into some thing rather nasty. The lid has been constructed using a steel frame made from 1” angle. This had no real strength to it and it lacked any rigidity. Two sheets of 3/4” plywood were bolted to this making the whole one piece lid extremely heavy. This was in turn covered with PVC sheeting and aluminium cappings. It was a beast!. On stripping it down it was clearly evident that it was far from watertight with both sheets of plywood suffering from severe water damage.

So the first issue was the lid. A new custom lid manufactured from heavy aluminium angle and covered with aluminium sheet was planned to replace it. This dragged on for months and my planned route of getting this manufactured on the cheap finally fell through. Parts alone for the lid were going to run to well over £100. The drawbar height was way too low so the front frame was going to require a swan neck conversion of some description. As time went by I finally decided that there was too much work involved. It didn’t help that I also work away during the week so I decided to sell the trailer and hunt for a more suitable replacement.

Trailers sell for pretty stupid money at times and finding something suitable was a slow process with many hours spent trawling Ebay.

I did eventually come across a chap selling three steel trailers. These trailers had originally been designed to power temporary traffic signals. They had a separate compartment for an engine and a large space accessible by two hinged lids. Out of the three for sale there was only one that appealed. The other two were constructed differently and lacked potential. It didn’t look too pretty, though it was clear the surface corrosion was fairly superficial and hopefully little repair action was going to be required. 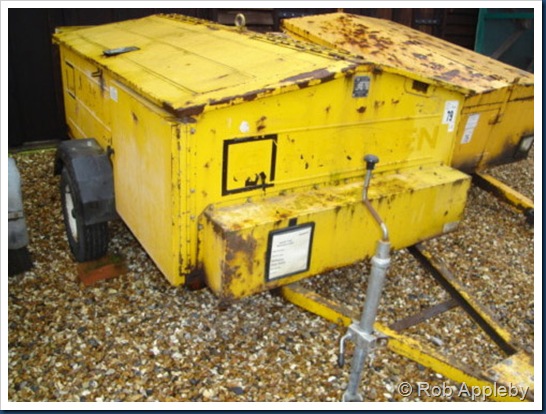 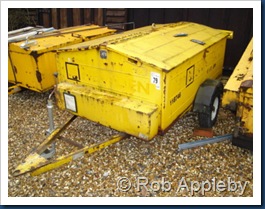 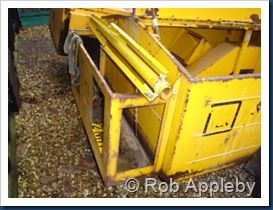 On the plus side the wheels and tyres were in excellent condition with the tyres looking almost new. The seller fitted a new 50mm tow hitch prior to me collecting the trailer. 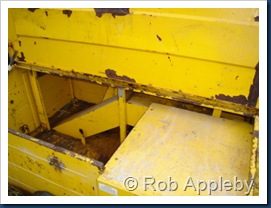 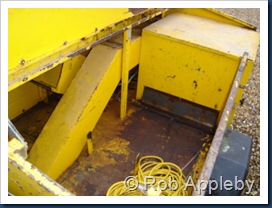 The interior of the trailer sported an array of metalwork bolted and welded to the structure. There was a large central rectangular exhaust duct plus brackets for housing lighting controls, etc. I was curious as to how the trailer has been previously rigged for its intended purpose so I surfed the internet and found a couple of complete trailers for sale from plant hire companies. A trailer in similar condition to mine complete with engine and lights was selling for £1700. Oh, I forgot to mention that I managed to pick mine up for under £130, what a bargain! 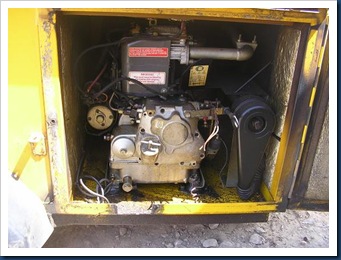 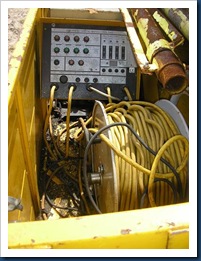 Anyway, mine came without engine, cabling and traffic lights. It was duly collected and towed the 30 miles home. It towed well despite being somewhat nose heavy, though this was something I intended to address during its overhaul. The first thing I did was to strip out what I could, this basically meant removing the exhaust duct (almost a 2 man lift!) plus the various brackets that were no longer required. The lids had a ‘full width/height ‘top hat section’ spot welded to the inside of the lids to provide improved rigidity. These were heavily corroded and had to be removed. The engine compartment was heavily insulated and this was stripped out. The sound deadening foam was soaked in diesel so I was pleased to finally get it all removed. There was a large bracket bolted to the rear of the trailer that had been used to store signs,etc. I finally decided to remove it as I didn’t really want gear stored outside the trailer. It was hellish heavy and the final result was a large pile of scrap metal outside the house, 50-60kg at a guess, perhaps more.

The next problem, and by far the biggest, was to remove the surface rust. I was going to let the local sandblaster do the work, though after a ‘special price’ of £150-200 cash I decided that a day or two of hard graft would achieve a similar result. I wont lie, it was hard and dusty work. I used a heavy gauge wire cup brush mounted into an angle grinder and made an excellent job of removing the surface rust. However, the surface itself was still going to require some suitable treatment to effectively kill the rust. After much searching I was pointed in the direction of a product called Fertan. The product has a tannic acid base and effectively neutralises the rust leaving a hard black top coating which is suitable for painting. Once this was complete a good coat of Galvaroid zinc primer was applied to the trailer lids and other areas that had suffered the worst corrosion.

Removing the corroded ‘top hat’ sections from the underside of the lids had resulted in the lids flexing far more that I would have liked. I fitted 2 full length pieces of 3mm aluminium angle to each lid which restored some rigidity to them. 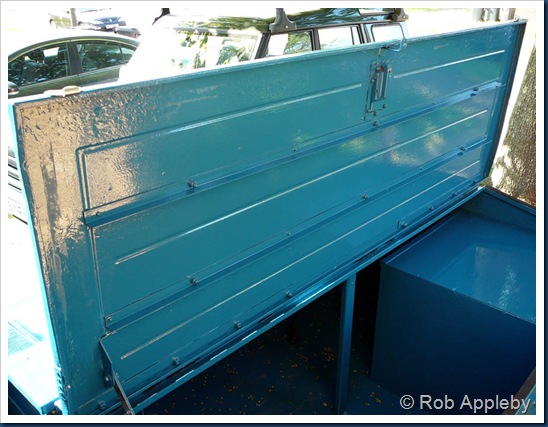 The painting has been a never ending task with most surfaces getting a coat of zinc primer, two coats of red oxide primmer and two coats of blue gloss. With the trailer now stripped of the mountains of metalwork and suitably painted it’s finally starting to look like a usable trailer with plenty of storage space. 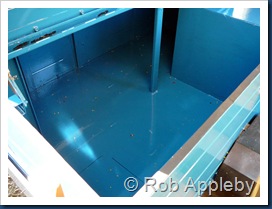 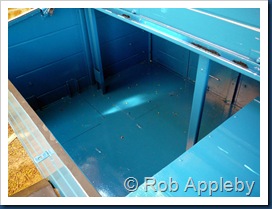 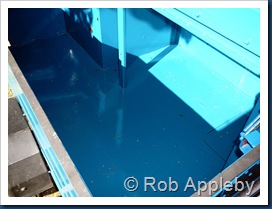 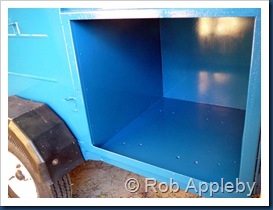 The floor area is to be covered with 3mm rubber sheeting and I may line the sides to a height of 12” with the same material, I’m currently undecided as to whether side protection is worthwhile or not.

Another issue was the length of the drawbar, it was too short. I wanted the trailer sufficiently far away from the car as to still allow the rear door to be opened with kayaks loaded. A longer drawbar would also make reversing the trailer so much easier. A 2m length of 50mm box steel was bolted into position to achieve the desired result. 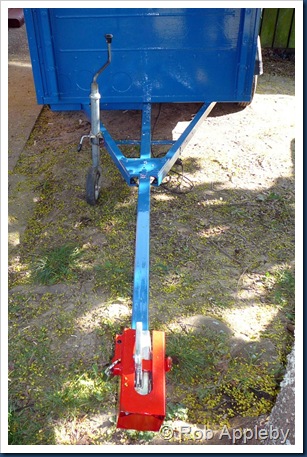 Here’s a few snapshots of the trailer. 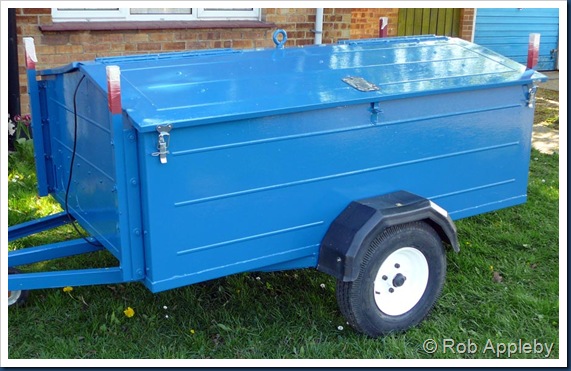 The trailer is still too nose heavy (though I have a simple solution) and there are still other modifications that I want to embody.

I’ve already addressed the kayak bars though the cross bars still need TIG welding in place, so I’ll cover these at a later date. I will be wrapping the bars in foam and covering them in tape, very similar to my car roof bars. I’ll probably incorporate a roller bar into the rear kayak bar. I envisage being able to load/unload a rigged kayak if required when moving from one venue to another. The width of the kayak bars will allow two kayaks to be loaded with ease.. If J-bars, or similar, were used then 3-4 kayaks could be carried if required. 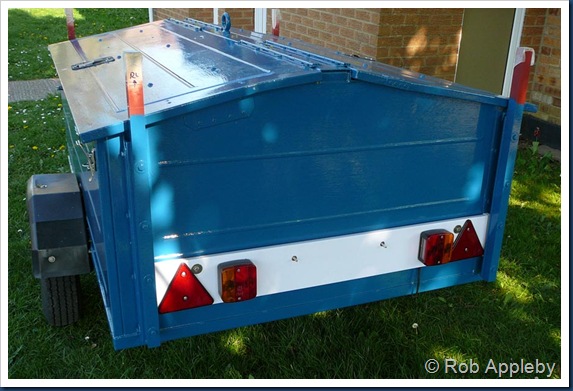 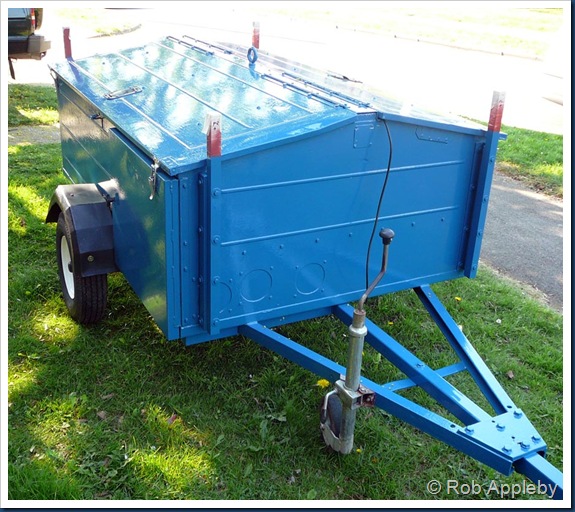 The lids weren’t too straight so I attached latches to the corners of the lids to allow them to be fully tightened against the seals. The R-pins are to be attached to the latch with a short stainless lanyard to prevent them being lost.

I will be swapping the trailer between two vehicles so I incorporated a ‘stud’ mounting affair into the trailer board. This allows plates to be quickly removed and fitted using stainless wing nuts. 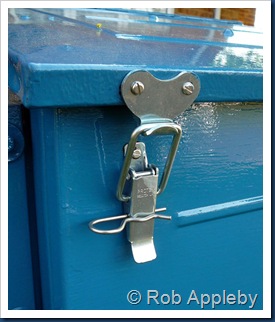 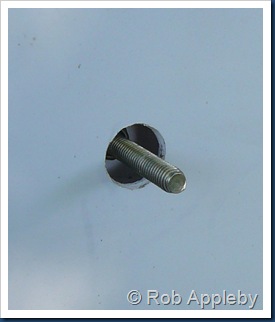 I’ve now started to modify the trailer to make it more camping/expedition friendly. If you’d like to see more take a look at part 2 to view the next stage of the build.

Thought you'd been quiet Rob - now I know why! Looking good - just got to rig it now. Good luck!

Cheers Andy.
I've started rigging it up today. Having to sort out jerry can holders, spare wheel location, rod holders, etc. Looking to fit a cooker in there plus storage containers for food, cooking gear, etc. Sounds a lot, but it isn't really. Should be finished within two weeks tops... then I'll be hitting the road !