I've been after something potentially easier to get the old yak around the place. It's not that difficult to throw it on the roof of my Land Rover Discovery, though it has become a wee bit more difficult since I've fitted the rudder.

I was thinking along the lines of a trailer of sorts. My mate Gary, modified a motorcycle trailer with great effect, easy to move around and a doddle to load/unload the yak. 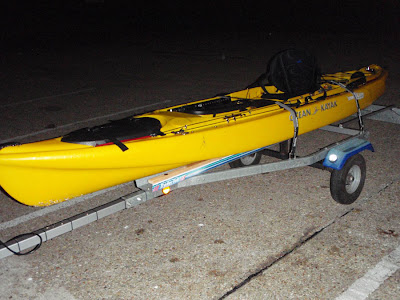 Nice and light, not that cheap generally, most go for £300 on Ebay. I really liked the idea, though I also fancied some storage space. In fact, a lot of storage space would make it double as a camping/yak expedition trailer. Plus it would keep my wife quiet as the garden rubbish could still be easily removed !

I've looked at a few types, basic camping trailers, box trailer, dog trailers.. and of course canoe and kayak trailers. I saw one that fitted the bill though it was a 12 return journey away. New, these kayak trailers go for £1500-2000 and I wasn't prepared to stump up that sort of cash.

Anyway, I've taken the plunge and picked up this custom built surfboard trailer this evening. 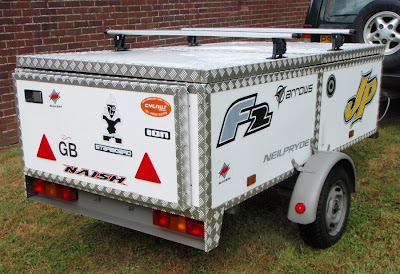 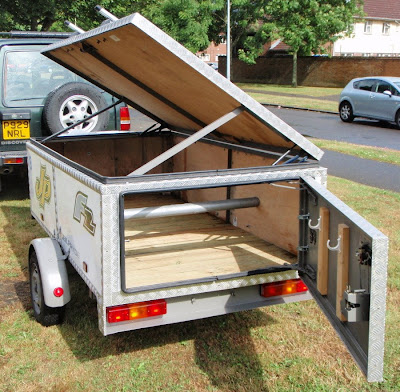 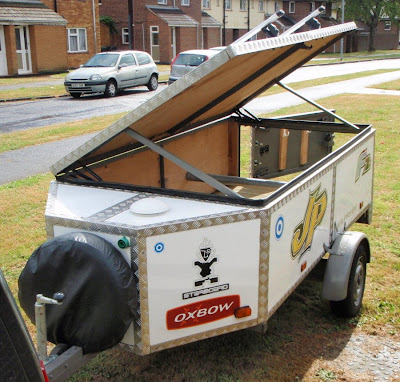 As it stands I can easily throw my yak straight onto the existing Thule bars. However, with some J-bars and could fit 2-3 yaks on top. Inside there's a huge amount of space.

There's a small amount of work initially, a couple of replacement nuts and bolts, hinge re-alignment, all very minor stuff.

I have plans for this trailer, various modifications, etc in order to make it into a top piece of kit. I'm open to suggestions on what might be a good idea..

Current thoughts:
I'm not rushing into anything, there'll be a lot of thought and sketches before any modifying takes place... watch this space.

As a follow up, I decided to sell this trailer for various reasons. I replaced it with something more suitable, see here: Kayak trailer project

That is a great trailer! I can defenitely see the advantages while taking camping/kayaking trips!

Rob, you could make a bed in there. Got myself a trailer but blinking tow hitch is £400 to have fitted. Skoda Octavia VRS apparently need removable hitch due to Reversing sensors. Lovely trailer Rob

Well I'm busy modifying the trailer so it'll be a few weeks until I can really start using it.

The lid was way too heavy so I'm making one out of aluminium, then I'm looking to fabricate some storage space for camping/cooking equipment at one end. Lots of ideas...

Awesome Trailer! I have seen some pretty hokey modifications before but this looks great. Can't wait to see pics with your boats on top!

Very nice and interesting blog. I like it and so much thanks for sharing this nice post with us and keep posting.