Most of my fishing tends to be at night so a decent headlamp is a must. About 2 years ago I researched the internet to see what what getting the better reviews, whilst still being reasonable value for money. This resulted in me purchasing a LED Lenser 'Head Fire Power Chip' headlamp. 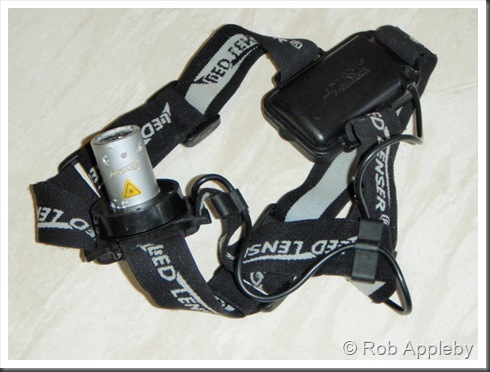 It's quite light at 130g when loaded with three AAA batteries. 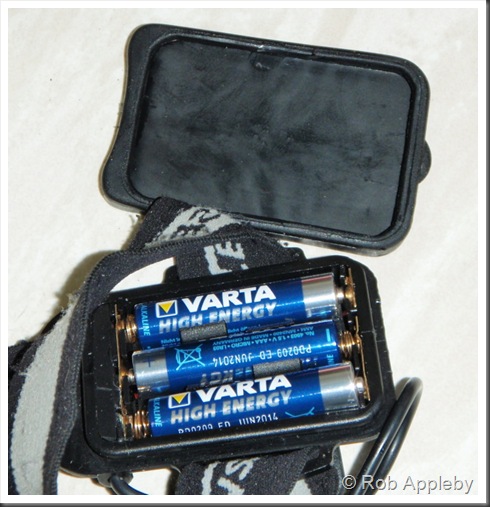 The initial light output was excellent for my needs, though like many LED lights it started to diminish after an hour or so. However, it would still produce very usable light for about 20-30 hours depending on the ambient temperature. The loss of intensity after the initial hour or so of use, would become noticeable when trying to make visual contact with the line leaving your rod tip, or when looking ahead of the kayak when recovering a fish.

Having said all this the lamp has, and still is, functioning as advertised. It's not waterproof, it's advertised a 'splash proof', which had been more than adequate considering I've never taken a dunking during that time!. However, the aluminium light housing is corroding away quite happily due to saltwater exposure. 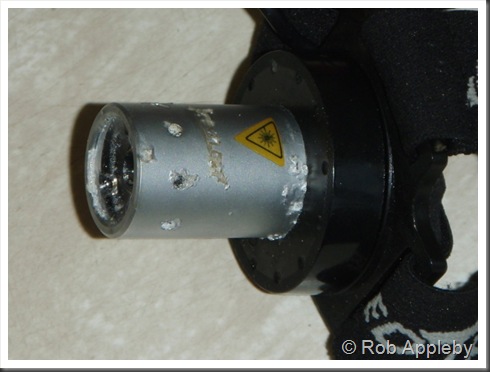 As much as this has not caused the lamp to fail, it's probably only a matter of time until failure does occur. Incidentally, the lamp is covered with a lifetime warranty, though no doubt the small print would ensure that a heavily corroded lamp would invalidate the warranty!.

I still think the light has quite some life remaining, so I made the decision to upgrade my lamp and to retain this one in my 'handy spares box'.

Again, lots of research lead me to the Princeton brand, the Apex in particular. I actually stumbled across this light a year ago, though the price was rather prohibitive at the time, plus my LED Lenser was functioning just fine. Anyway, after hunting hunting around for the best price I had one delivered for just over £50, virtually half the RRP price. 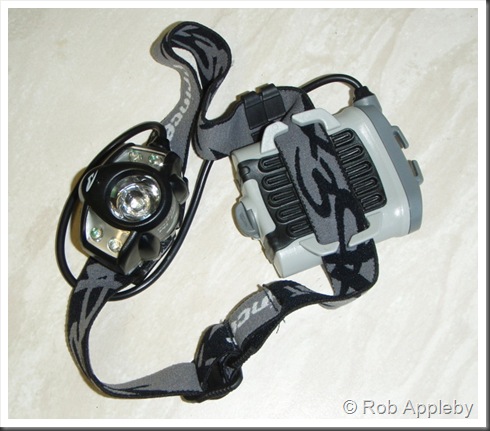 There's many attractive features about this particular headlamp. Firstly it's fully waterproof to a depth of one metre (for 30 minutes), a definite bonus for the kayak fisherman. It'll also make cleaning the saltwater off the lamp at the end of each trip very easy.

The maximum light output is quite staggering for such a compact unit. The LED Lenser quote a maximum of 50 lumens light output, whereas the APEX manages a stunning 130 lumens in its 'Maxbright High' setting. At this setting the quoted useful range is over 90 metres for one hour. After that time the light intensity will fall off. I've yet to try this fully in anger, though it's certainly very impressive.

The headlamp itself has one 'Maxbright' LED in a centre housing with four 'Ultrabright' LEDs in the outer housing. The housing can be adjusted to cast light forward or down (or any angle in between). The battery power meter is the small hole located directly below the Maxbright LED, this is covered in more detail later. 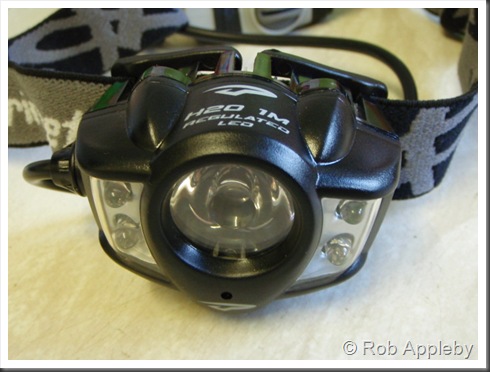 The combination of LEDs provides four light levels as well as a safety flashing mode. The 'Maxbright' and 'Ultrabright' LEDs are selectable separately via separate 'soft push' buttons on the base of the LED housing. 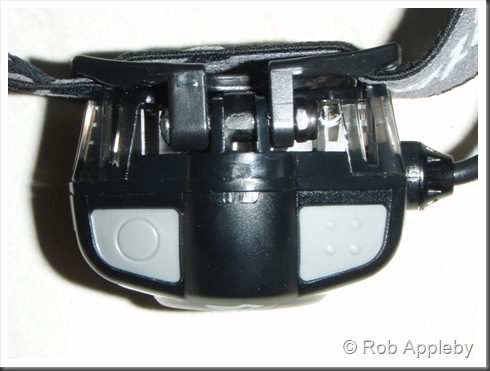 Due to the high power output of the LEDs, especially the 'Maxbright', the LED housing incorporates a heat sink to dissipate heat and prolong the life of the LEDs. 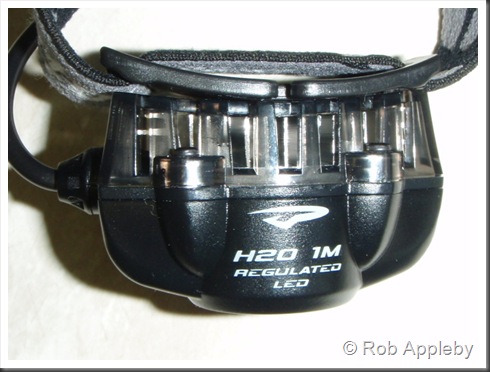 Another nice feature is the presence of a small blinking 'Battery Power Meter LED' which provides a general idea of the reaming battery life, varying between green, yellow and red depending on remaining charge.

Green indicates greater than 40% of battery capacity left, yellow at 40% and red when less than 20 minutes of run time is remaining.The quoted battery life is 150 hours compared to that of the LED Lensers' 50 hours. Obviously this is depending on usage and ambient temperature, though it's clearly a huge improvement over the LED Lenser. 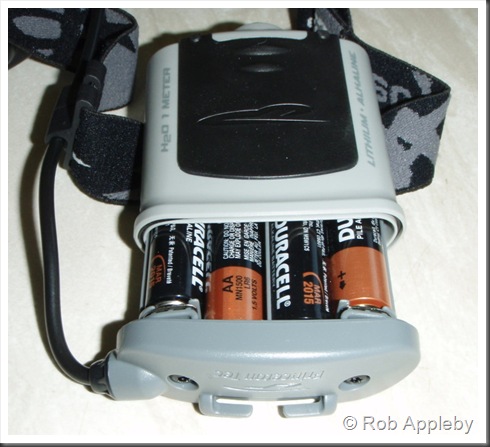 The Apex uses a current controlled circuit that enable the headlamp to maintain a constant light output until a certain battery voltage is reached. This feature makes the performance of the headlamp far superior in usability compared to other headlamps. 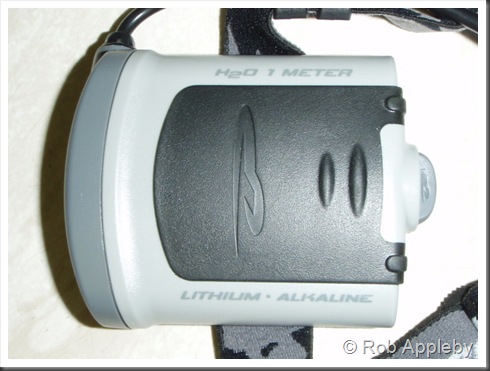 The Apex is compatible with Lithium batteries which as well as holding their charge better in colder temperatures, they are lighter than alkaline and re-chargeable batteries.

The warranty for users with the USA is lifetime, outside the USA it's 10 years. Though I'm certainly not complaining with a 10 year guarantee!. Time will tell how this headlamp performs in the long run, though my initial impressions are extremely favourable. I'll report back in a few months with an update to this early review.

Tom again from waterlooville shame about the weather this week!! Just heading back off to work for another two weeks but hopefully i can catch you when i am home next, Did squeeze in a few hours from the shore next to clarence pier in southsea and was shocked to catch what i believe was a stingray!! only about 2lb but a new one for me!

Good luck on your trips and hope to catch you when im home.

Yup, the weather has been absolutely awful!!. Look at it today though, it's lovely, and you're heading back off to work... typical!

Speak to you when you get back.