It’s a while since I’ve fished, weeks in fact!. I’m leaving the Navy after twenty two years which is in itself a massive change, then there’s job hunting and interviews. Just to add to the pile, we’re moving house, hence fishing has very much taken a back seat. 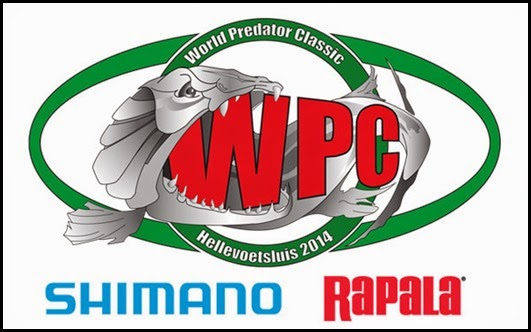 I have to admit that I wasn’t too organised for this trip, in fact I didn’t even look at my gear until the day that I was due to depart, not advisable!. The journey was over 300 miles, travelling via ferry from Dover to Dunkerque, through the night, arriving at Daniel’s house very early in the morning!. The last few miles were driven later that morning, arriving at a campsite that had been booked up for the weekend. Originally I’d planned on doing things on the cheap, sleeping in a tent for the weekend. However, the Dutch guys booked a holiday home and kindly included me in their plans. To be honest, it worked out extremely well, great company as well as a decent bed to sleep in after a long day afloat.

I joined the guys for an evening meal and enjoyed some exceptionally tasty spare ribs, probably the best I’ve ever had. A few drinks and a good social afterwards, what a great start to the weekend competition! 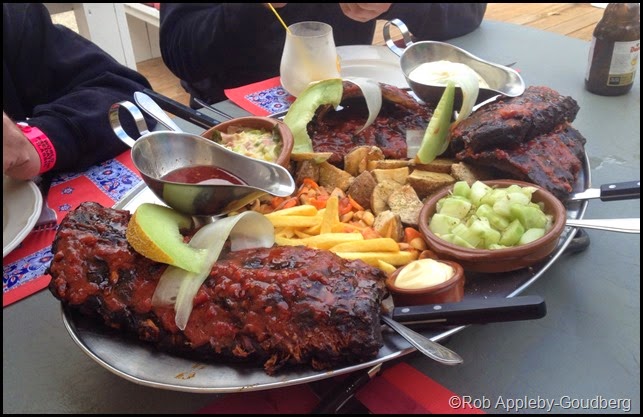 With a slightly baggy head, competition day one commenced with a coffee and very little else. Fortunately I’d packed a carrier bag full of biscuits and other such healthy food to get the sugar levels raised as required.

The most popular Hobie fishing kayak in Europe is the Outback. There’s very good reasons for this, it’s super stable, easy to rig and deceptively quick for such a wide kayak. However, they say that a picture speaks a thousand words, well the photo below shows the vehicles parked outside the house., and that wasn’t all of them! 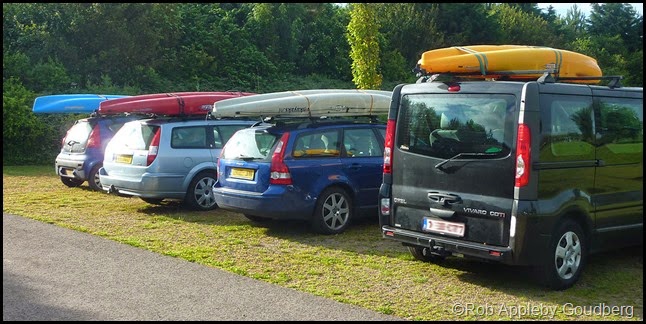 Once all the guys were organised, we drove down to Hellevoetsluis as a group where I met up with David Morris and Ian Harris of Team Hobie GB. It’s always good to see a large group of like-minded folk in one area, as well as having the chance to look over the kayaks to check out the various rigging solutions. I’d decided to keep it simple for this competition. Previously I’ve taken boxes of lures and I’ve learned to my cost that it’s all too easy to chop and change lures to the point that it detracts from the actual fishing. For this trip I packed two boxes of lures with perhaps 8-10 lures to choose from. I rigged three rods, one for vertical jigging, one for spinning and one for drop shot, though the latter never saw any action. 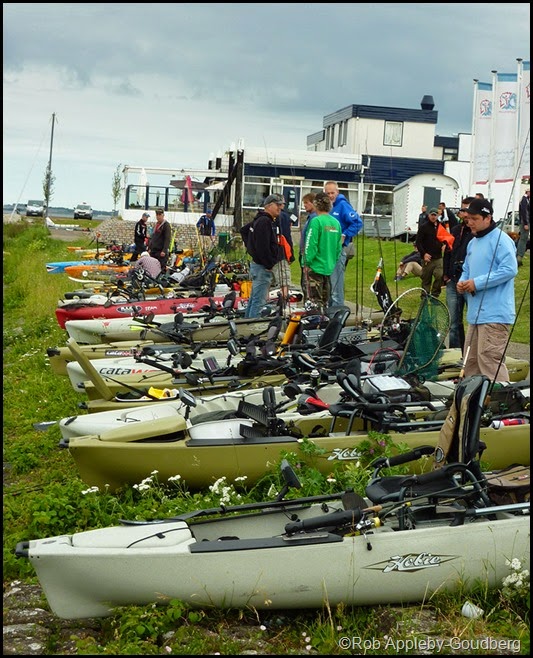 Hobie kayaks dominated the kayak fishing line-up, though there were a handful of paddle kayaks. There was a total of thirty eight competitors, coming from England, Belgium, Holland, Germany, Finland, USA and more. 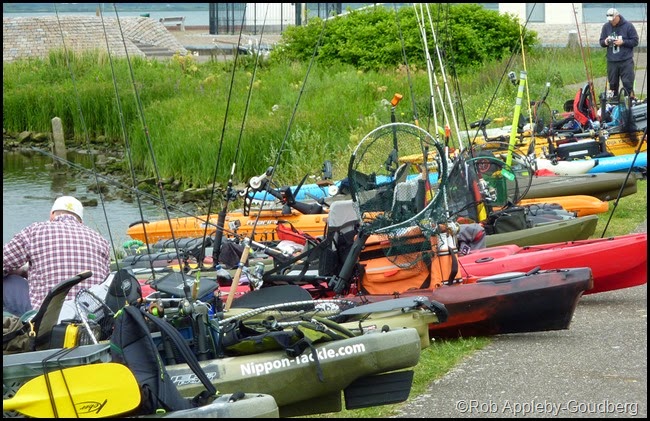 This was a huge water, quite daunting to be honest. There was two potential areas that I decided to fish, the shallows around the edges of the designated fishing zone, or the shallows and drop offs of the main waterways. The WPC also included a boat event, in fact it was the by far the bigger part of the competition and as you’d expect the boat fishing zone was extremely large. At a glance the kayak zone seems quite small, though trust me, it was big enough for a six hour competition. 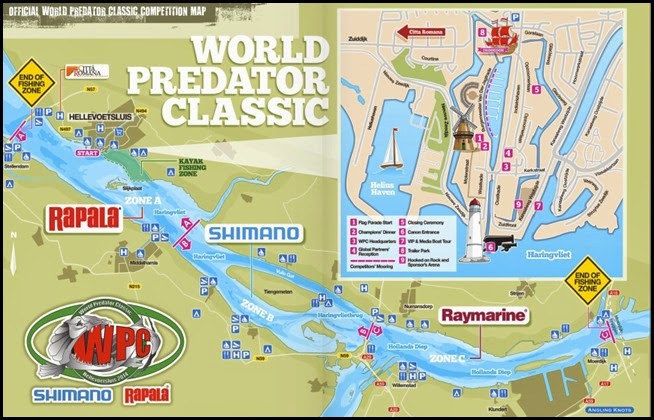 After a short brief which included the issue of an official measuring board, a kayak inspection and a gift of the custom WPC Rapala, we were good to go.

Day one was sunny and a little blustery. This wind which came and went throughout the day seemed to keep the kayak fisherman close to shore. I headed further out into the chop to fish various drop offs, casting into the shallower water and retrieving over the drop off itself. I didn’t have to wait too long to get my first hit of the day, a respectable sized Perch of 38cm. 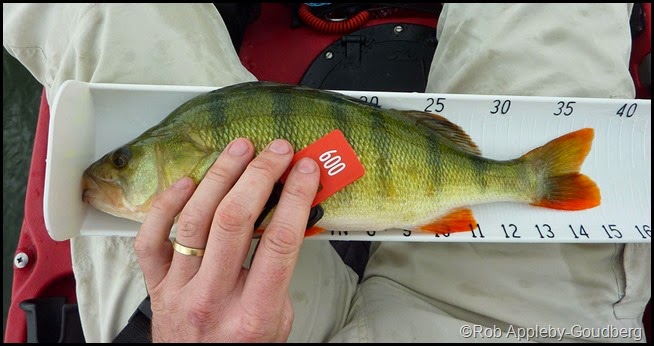 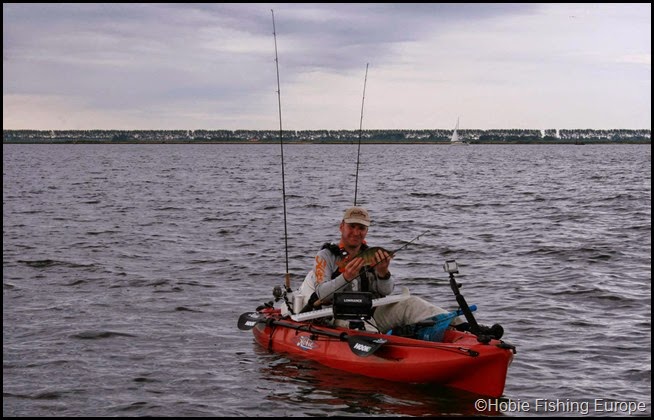 The maximum bag of fish per day was three Perch, three Zander and a single Pike. There were minimum fish sizes and the results were on aggregate length. It then went rather quiet and it was later morning before I managed my next fish, a small Pike of 65cm. There was a spell where the wind dropped off completely and I found myself engulfed by a plague of flies.. in my ears, nose and mouth. Yuk!, there was a moment when I almost packed up and headed back in, though fortunately the breeze returned and the flies disappeared with it. 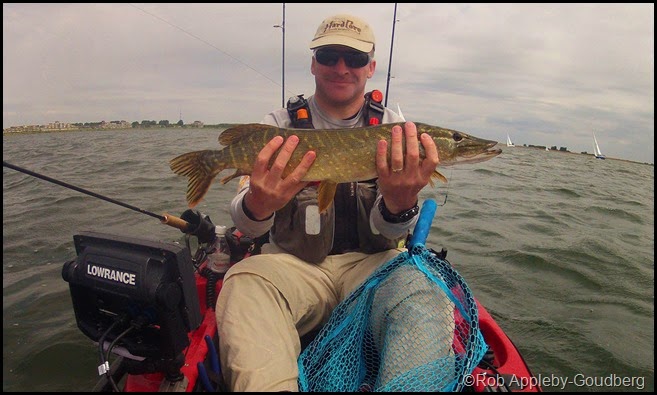 A little later I caught another Pike of 64cm, though being smaller than the first it was released without so much as a photograph. Despite another 2-3 hits to my lures, that was the last fish of the day. It’d been difficult fishing, though as it turned out I’d done rather well all things considered. The wind had picked up and it was a bit of a wet ride pushing through the swell at speed as I returned to check in. 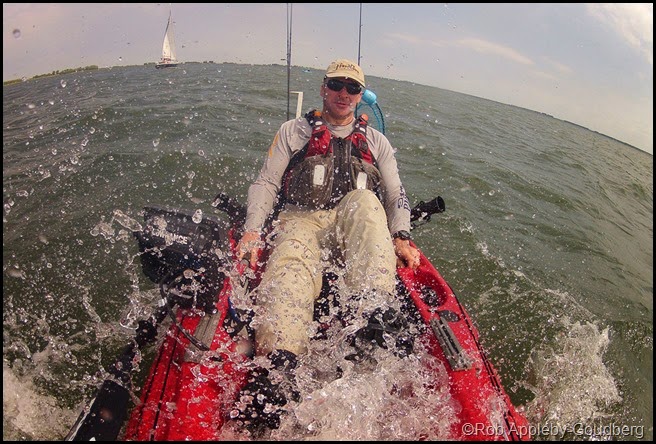 After checking in, we wandered into town to submit our results along with our camera memory cards. I’d managed to secure 4th place at the end of day one, very happy. 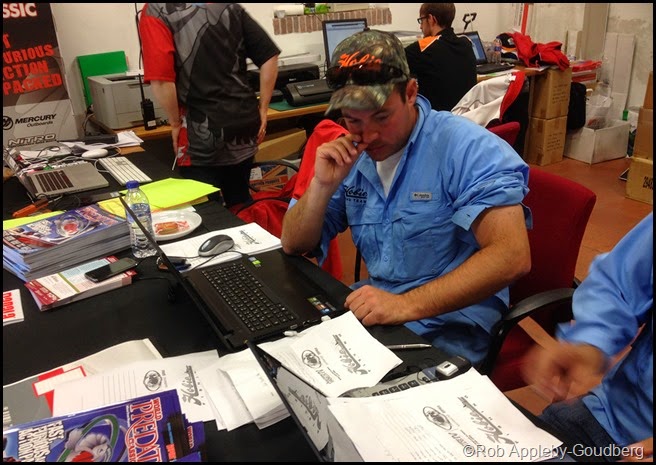 That evening was spent enjoying a social and a few drinks with the Dutch guys, a great end to day 1. 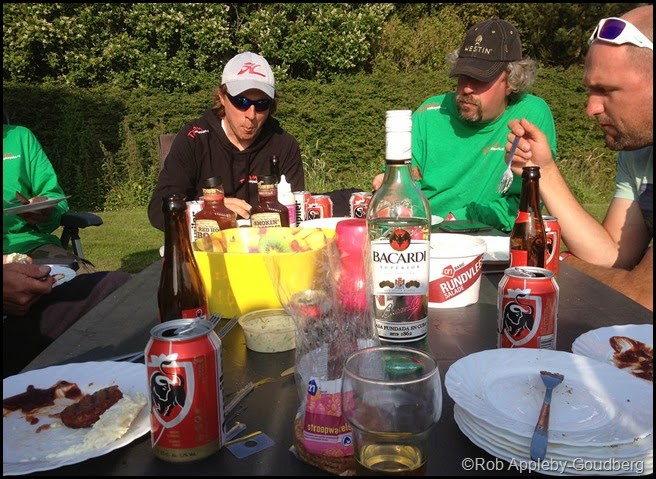 Day 2 started much the same as day 1. The plan was simple, get out there and catch some fish, hopefully a Zander as that would put me in a better position. With the obligatory bottle of coke and packets of biscuit packed, I headed off to the start line to await a blast from the horn… that’s me sat on the starting line!

Day 2 saw the wind swing around as the day progressed and I found myself being pushed onto the shallow area that I was fishing far too quickly. I tried my drogue for a spell, though I wasn’t achieving the results that I wanted. 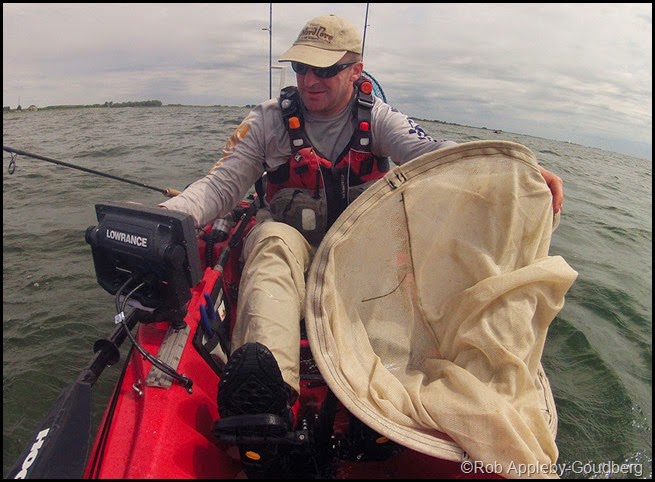 I ended up reversing the Mirage Drive in the foot well to enable me to pedal backwards. This proved to be highly effective as I was able to maintain my position with minimal effort. It only takes seconds to reverse the drive and re-position the pedals. Steering at high steep whilst in reverse is not recommended!

The Lowrance Elite 7 HDI was working hard all weekend. I’m really liking the unit and I find the multi-mode displays extremely useful. I’ve found myself using the broadband/down imaging/map combination is best for general use on a new area, switching over to map/broadband for general use. Also, being able to lay the DI next to the broadband for detailed work is extremely useful. You can overlay the broadband and DI, though I prefer to keep them separate at the moment. Fixing new waypoints requires two clicks of the ENTER button, simple and effective to use. It would be nice to be able to set the depth to permit the DI frequency to automatically swap over, rather than watching the bottom fade in deeper water and having to manually select 455Khz. A minor complaint, but something that I’d like to see in a future upgrade.

Not too much to say about Day 2, it was very slow due to a virtual complete lack of fish!. I managed to register a couple of hits to my lures and that was it. The fish just weren’t feeding, I don’t think that skill came into it that much over the weekend, just a case of being at the right spot at the right time. That said, I’d faired better than most over the two days and the final results saw me in 5th place. Dang, they spelt my name wrong! 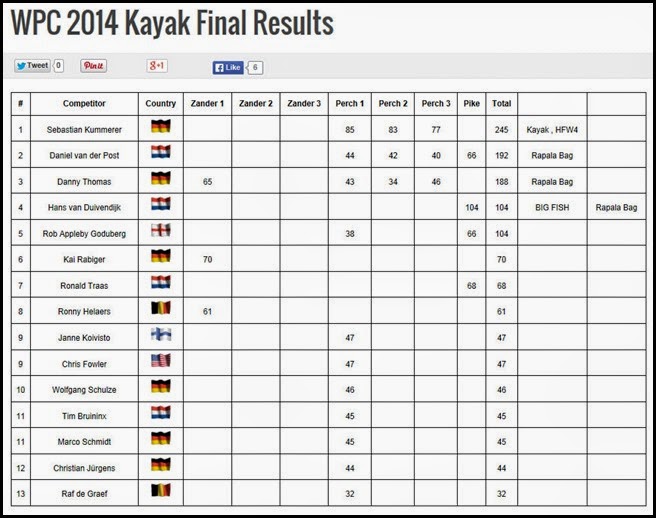 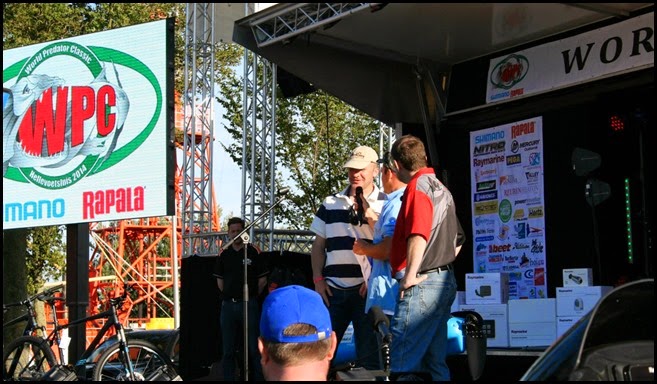 Below is the top 10 line up. As I mentioned earlier, only 13 out of 38 anglers caught over the two days, it was tough fishing. 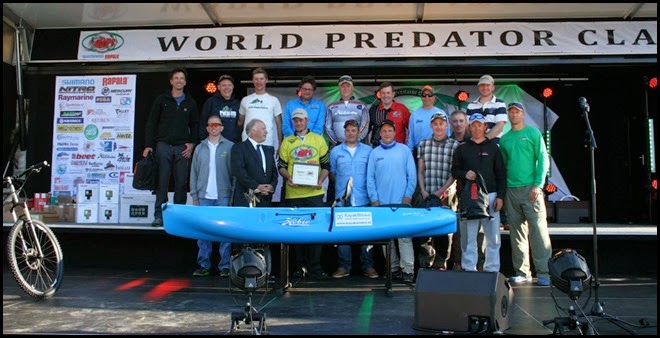 Congratulations to Sebastian Kummerer for taking the yellow jersey (1st place) and to my Dutch friend Daniel van der Post for taking a well earned 2nd place. David and Ian didn’t manage to bag any fish for Team GB, thought that’s very much a reflection on just how tough the fishing was out there.

The next big competition is the Hobie Fishing European Championship in September. Hopefully I’ll be making the journey along with the my Team members, it all depends on when I'm moving house.. watch this space!