September saw an opportunity for a few days fishing at Anglesey, Wales.

Travelling from the Portsmouth area with two Big Games on the roof made the journey around six hours!, though it didn't feel that long.


First stop was Anglesey Bait Centre to collect some pre-ordered bait. £20 worth of rag was collected and a few pounds of squid, we were going to take some macky too but we were assured there was plenty to be caught around the island. Unfortunately there was a distinct lack of mackerel, we caught about 8 over 3 days, all of which were very small indeed. Though that wasn't the worst, on arriving at our digs the worm turned out to be the worst I have ever seen, brown, hardening and all dead within 12 hours.. NOT PLEASED! - BE WARNED


We'd been advised that some tope had been caught during the last week which resulted in us paddling around the Rhoscolyn area. 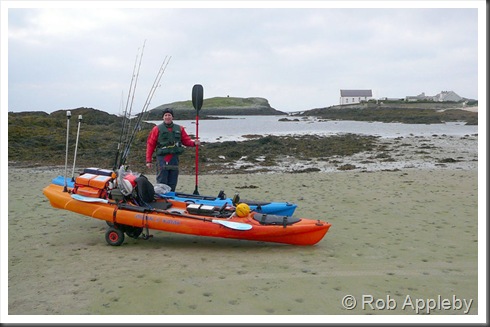 As previously mentioned the mackerel weren't about which screwed up our plans somewhat. However, we resorted to squid and a few dead worms which turned up a multitude of doggies!, probably a few small huss in there too. 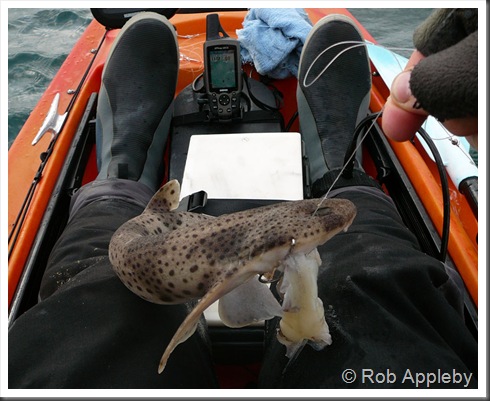 The tide rip around these headlands is very impressive!, something to be respectful off, though it's also great fun!. There's a few small islands about 1/4 mile off the headland where we fished for a wee while. 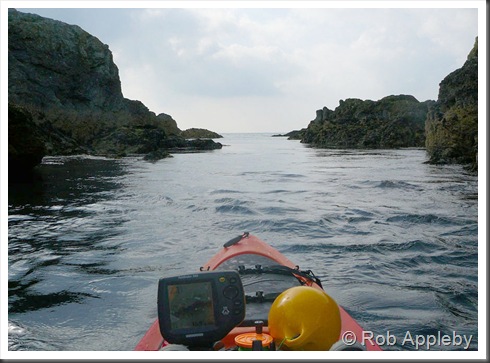 Again the rips between the islands and rocks are very strong indeed, at one stage I was doing an easy 8mph without paddling , not bad for a Big Game!. Despite the tides the yak performed brilliantly, not once did I feel worried... well there was once (come to that later).


That session we paddled around 5 miles, at least half of which was against the strong tides.. nothing like getting paddle fit Again, lots of dogfish around here... not much else.Not a problem though as I enjoyed paddling through the various channels within these small islands.
Now I did have an 'exciting moment'. Jim (fellow yak angler) was anchored around 100m off a small island, I drifted past him and dropped anchor about 40/50m off the island and let out the same depth again as slack. When the warp tightened the whole yak started to vibrate, most odd. It was still very stable though getting buffeted around quite heavily in what appeared to be a strong tide rip. Looking around the anchor buoy wasn't behind the yak... in fact when I spotted it I realised just how dodgy things were!!... it was three foot under water and vibrating quite violently.
The rip was quite hellish and the anchor warp was, well to say tight would be a huge understatement!. I did think about cutting it, as trying to retrieve it normally was not an option. Though leaning back and pulling with both hands, this took several attempts, I managed to unclip the anchor from the trolley. Paddling back uptide I managed to grab hold of the now surfaced buoy and retrieve the anchor. I never felt in danger, though I was surprised how strong these rips can be... and how hard to see at times. 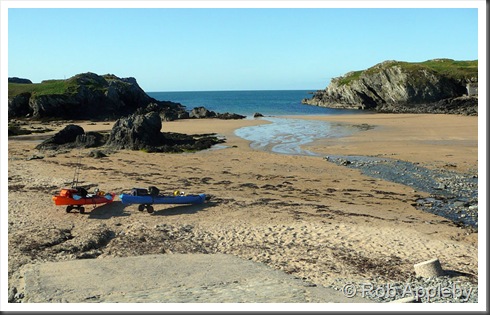 We tried a couple more venues over the next two days though the fishing was difficult, alas, catching doggies all day was not!. Jim managed a couple of strap conger of the final day which was good to see. 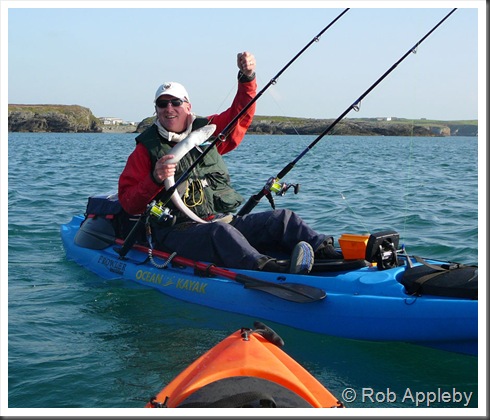 The scenery was awesome which made up for the poor fishing, quite some time was spent exploring a few nooks and crannies,... a few of which produced pollock to around 1.5lb on feathers. 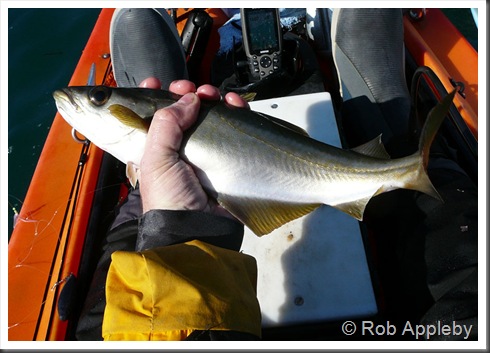 The clarity of the water up there is truly amazing, paddling into some caves was a real treat. 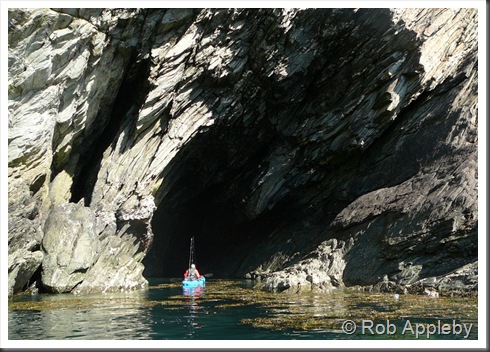 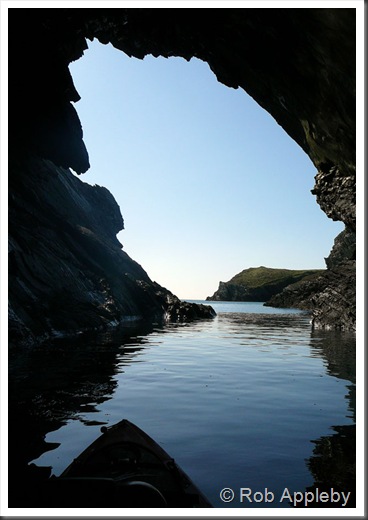 Despite the lack of species and big fish it was a thoroughly enjoyable trip. We came back a couple of days early so we could hit the local waters.
Please feel free to comment.
Email ThisBlogThis!Share to TwitterShare to FacebookShare to Pinterest

Great report and photos Rob, nice to have a few fish too.Bucketboy

Hi Rob,
Am following your blog with interest. A camping holiday in Anglesey rekindled my interest in Sea Angling, your blog is getting me interested in the idea of Kayaking I have to say. Regarding getting bait on Anglesey I was camping near Church Bay and if you hit the beach there at low tide you can dig enough Lug for a few hours fishing in about half an hour. Thought it might be of interest if you go back. I caught my first bass from the shore ever (at the age of 40!) this year which even though a small un has got me into fishing again!
Take care and tight lines!
Paul

Hi Paul, thanks for the comment. I did notice that a couple of the bays I'd launched from had tremendous populations of lugworm, pity I'd forgotten my trusty fork!

Good to hear that you've re-kindled the fishing bug. Yak fishing has transformed my fishing experiences, definitely an avenue worth exploring.

Odd that ABC's rag were sub-par but next time your thinking of having a go on the island give me a yell and I'll put you in touch with a few other like minded kayaking loonies :)

Not for me I'm afraid as me and my wife like our feet on solid ground and Anglesey has a stack load of places to fish from both rocks and sand but well done.

Stuart
Sea Fishing and Walking in the UK

Hi Stu, I'll take you up on that next time I'm up that way.