Fished a newly discovered bass mark local to myself with a fellow yakker. As dusk fell the bites came, small taps followed by bites that bent my 6lb class rod almost double!. The first fish took my mackerel bait and ran like stink for cover, with the drag wound down this fish stripped line from the reel, my only hope of stopping it was to apply more pressure with my thumb... and it was off!. On retrieving my trace the Mustad 4/0 wire hook was bent open at 90 degrees, what a fish!!!... the adrenalin was running.

Next bait down the tapping started again... sliding the rod quietly out of the holding I waited. Sure enough the rod bent hard over and off went the fish, not a big fish but a good initial fight. A bass of around 3lb came into the yak, put back to fight another day.

Yet again the scenario repeated itself though this time it was a better fish. Holding hard I stopped its run for safety and slowly it came to the surface, a cracking bass of around 7lb!. It was swiftly bought onto my lap and unhooked, though I was unsure whether to keep it or not... then the quandary of what to dispatch it with?, something I'd next really given prior though to.

Before a decision could be made it somehow came loose and shot forward. Spiky dorsal fins moving fast are a difficult thing to tame, and it was over the side and gone before I knew what had happened... GUTTED, though thoroughly amused at the same time.

What a night, hopefully to be repeated. 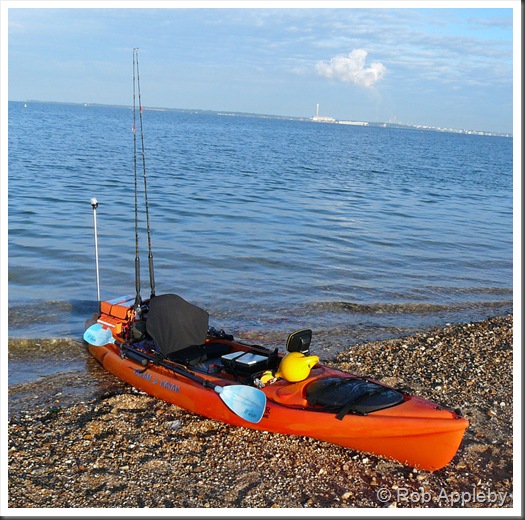