Trying for an early Bream

As per my latest fishing reports there's little to catch in my local area, and it's difficult to motivate yourself to get afloat under those conditions. It was time to travel again, and it was to be somewhere totally new to me.

My destination was Kimmeridge is a small village in the Purbeck district of Dorset. The village stands on 'Jurassic Cliffs', the name given to the area because of the quality and variety of geological landforms and fossils along the coast.


On arrival the scenery proved truly stunning, what a great venue for a days fishing!. The launch site was convenient, close to the car park and straight into the bay itself. It was somewhat breezier than forecast making the morning seem rather chilly. I paddled out after 8am, and after having a quick look around the bay paddled out towards my first mark of the day.


There was a lazy swell running towards the coast, topping out at around 6', making the paddle out quite enjoyable. The first mark was just over a mile offshore and in nearly 20m of water. Now this is where it became a little interesting. I knew the tides were springs, however I hadn't fully appreciated the tide race that was present. Down went to anchor and all became apparent!. 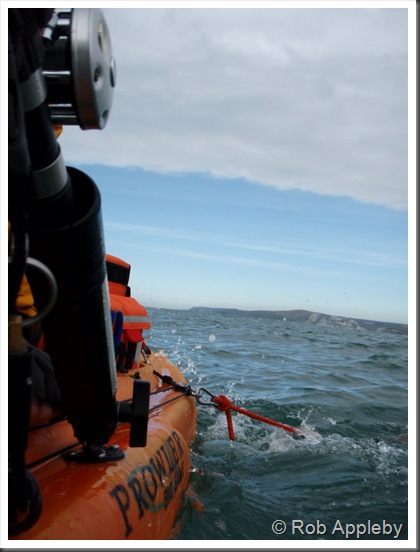 My anchor buoy was around 2' underwater, dragged down by the current, not ideal. This in turn was causing the water to slam against the stern of the yak. However, I was anchored up so fishing commenced.


As I was primarily aiming for an early bream, I dropped a set of mini hokkais over the side, baited with alternate strips of mackerel and squid. The other rod being baited with a generous lash of mackerel on a pennel rig. Due to the strong tide I required 12oz of lead to hold bottom, not too enjoyable considering I rarely use more than 4oz. This allied with my 6lb class boat rod proved far from ideal, though I was fishing! 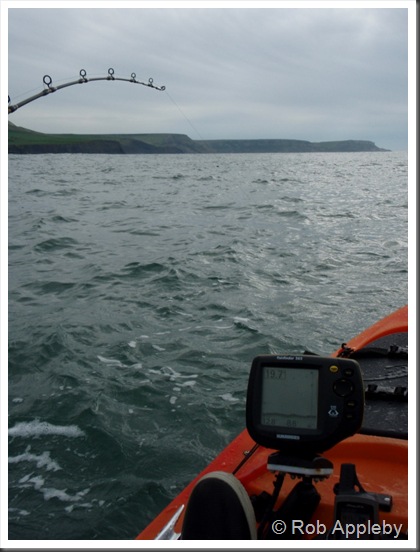 Bites were a little difficult to see due to the movement on the rod tips, however a light rattle resulted in the first fish of the day, the dreaded dogfish, though at least I was off the mark. He wasn't the biggest specimen neither, though he was clearly hungry. 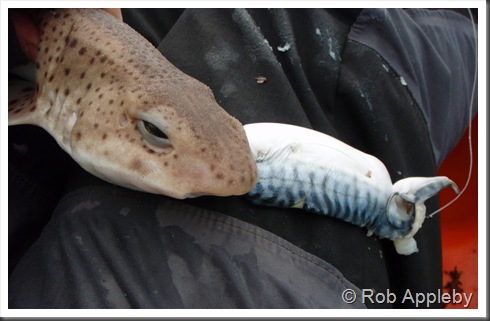 I sat there for around 30-40 minutes until the tide started to ease, it must have eased a little bit as my anchor buoy was now visible, albeit still below the surface! 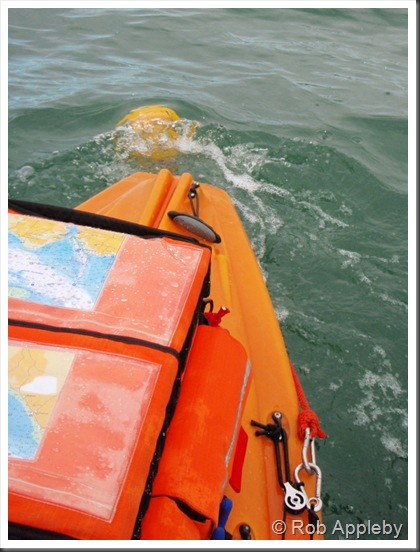 Feeling the urge to relocate to some slightly shallower water in an attempt to get out of the tide, I recovered the anchor warp, only to arrive above the anchor only to find it well and truly stuck. I wasn't too impressed, even less after 30 minutes of pulling before it finally came free. With the anchor in the yak I drifted away at an impressive 3.7 mph. If I'd lost my anchor that would of effectively been the end of my trip.

I must have moved 6 times during the day, bar one time my anchor was stuck every time I tried to recover it. Fortunately the weak link gave each time after a good pull so I managed to retain my anchor.

I moved off into shallower water as planned, into about 16m. The tide flow was less and I could hold bottom with 6oz, far better. Unfortunately the fishing was not, and after an hour I'd not seen another bite.

Though I moved around from spot to spot I only managed another two dogfish. However, the sun made an appearance around midday and the breeze eased off making the day a very pleasant one at that.

There was quite some surf running over an inshore reef, so I paddled in within about 50-100m and watched the surfers ride the waves whilst I rode the swell. I eventually moved back into the bay and retired my bait rods in favour of some lure fishing. 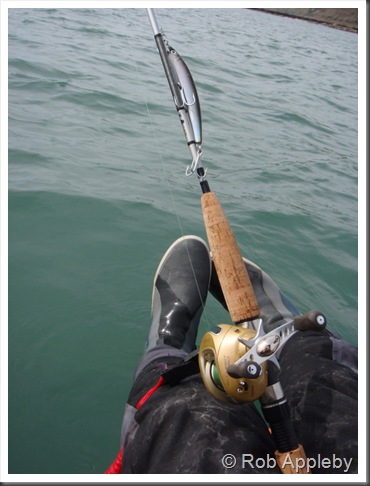 Sadly this proved totally fruitless so I swapped over to a float rig, fishing ragworm and mackerel strips close to the bottom in 4-5m of water, again, no joy.

After seven hours on the water and paddled back to my launch spot. I'd planned to switch the 'track' function on my GPS prior to launching, only remembering at my 2nd mark. The photo below shows the GPS with tracks enabled, possibly not that clear as they're faint dotted line on the GPS, but uploading them to the PC once home the function really comes into its own. 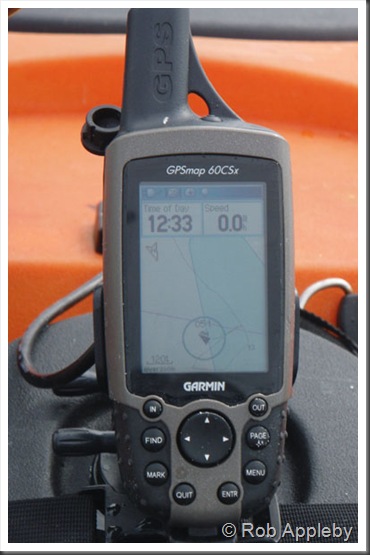 Allowing for not enabling the track function at launch, I'd paddled six miles or more throughout the session, not too bad for my big old yak in the tide. 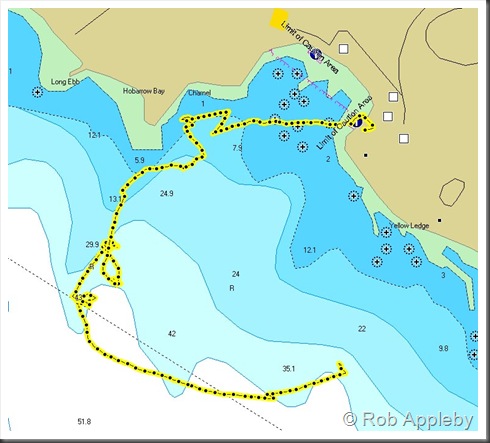 I'd be lying if I said it wasn't a disappointing session from a fishing perspective, though the weather and the surrounding landscape made my first visit to this venue an enjoyable one. It was a bit optimistic hoping for a bream in early April, though I'll be returning in a month when hopefully the bream will be there in force.

Didn't you fear that at any time the stern might go under the water?, I don't think I would ever have the confidence to anchor in a tide so fast !!

Hi Peter
I've actually accidentally anchored in far worse. I think that's one advantage on the stability that the Big Game offers, it just seems to sit rock steady in whatever gets thrown at it.

I'm sure the weak link would go long before the yak got into trouble. I normally half snip through my weak link (small tywrap), to the extent that it has broken whilst an anchor before, in lesser tides.

I think the issue when anchored in a tide like that is more the recovery of the anchor, hence why I waited a short time for the tide to ease slightly before attempting it.

Worst comes to worst I'd unclip the anchor from the trolley, or in an extreme case cut it loose.

Dude, Rob, You should disassociate from me. My bad luck is rubbing off on you! I'm like a no fish plague!

Hi Jason,
have you been blanking again?, haha. Seems I'm going to have to check out your blog for a blanking update :)