I've fished the last two weekends with little to show for it. Last weekend the wind was a fresh north easterly, and the thought of sitting in that for several hours fishing for plaice wasn't too appealing. My other favoured venues were either potentially un-fishable due to the wind, or still a bit too early in the season to be producing.


The solution was to find a new venue, somewhere relatively close, and it needed to be sheltered. The answer?, Portland harbour!. 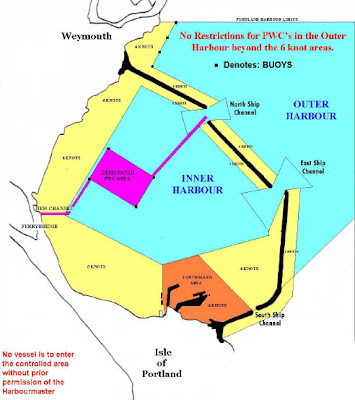 Portland Harbour is located beside the Isle of Portland, off Dorset, on the south coast of England, one of the largest man made harbours in the world. Looking at my GPS, the harbour is two and a half miles across at its widest point. Previously a naval harbour, The port is used by all nature of vessels from commercial ships such as bulkers, tankers, container carriers car carriers, survey and Reefers etc to British and foreign naval vessels.


It took just over an hour to travel down to the chosen launch point, close to Sandsfoot Castle. The launch was very easy, trolleying the yak down a short concrete ramp onto a sandy beach. With so much real estate to potentially fish we picked a couple of likely fish holding locations to try on our visit. There are three entrances into the harbour, located in between the long breakwaters. 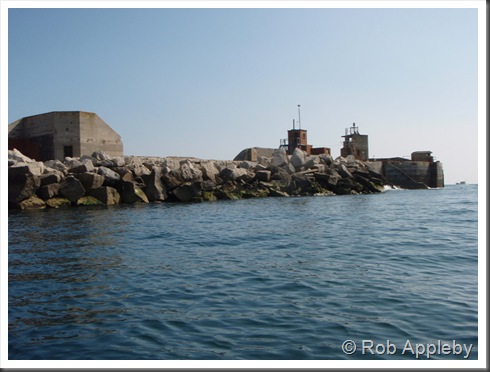 Clearly these are going to allow fish in and out of the harbour so it seemed logical to fish these locations. 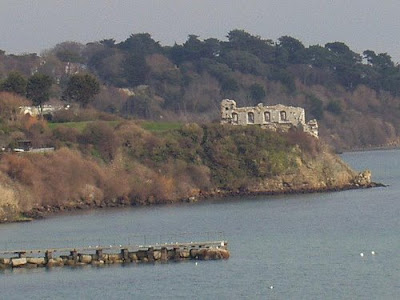 The first mark was a gentle paddle of just over a mile, though what a lovely paddle it was, very scenic. The water clarity was excellent, probably 6-7m before the bottom faded away. I found it interesting to see how well the fishfinder reproduced the weed beds as I paddled over them, providing me with a better understanding of what you're actually seeing on the fishfinder.

Anyway, we reached the chosen mark and hooks were baited. I'd originally planned to go conger conger fishing in the Bristol Channel and the rods were rigged accordingly with wires traces and 6/0 hooks. I've caught plenty of conger in daylight before and the venue screamed conger so I decided to stick with the conger rigs, one baited with mackerel, the other with either bluey or squid.

After a couple of hours I'd not had so much as a bite so I paddled off to another spot, frustratingly it also proved totally fruitless. My yakfishing partner, Jim, paddled off to fish a bit of structure further midway down one breakwater, though being stubborn I sat it out for a wee while longer.

Jim radioed in a short while later informing me he was getting bites, then another call to say he'd landed a decent wrasse. Lines were retrieved and anchor hoisted. Not wanting to waste the paddle to his location I attached a Rapala to one rod and trolled it close into the breakwater. Bar a fleeting moment of hope as the ratchet screamed (I'd snagged a shallow rock!) the trolling produced a big fat blank. As I closed in on Jim he called in again to say he'd landed a bass, after a couple of photos I dropped anchor and re-commenced fishing. 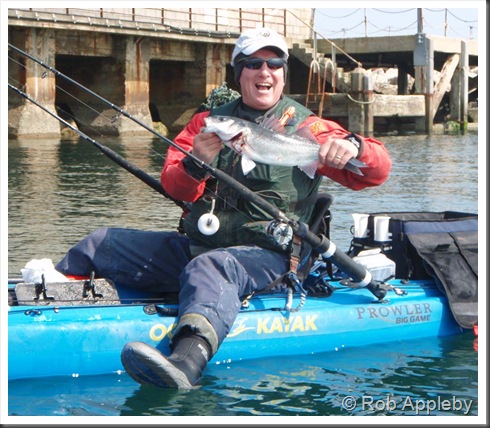 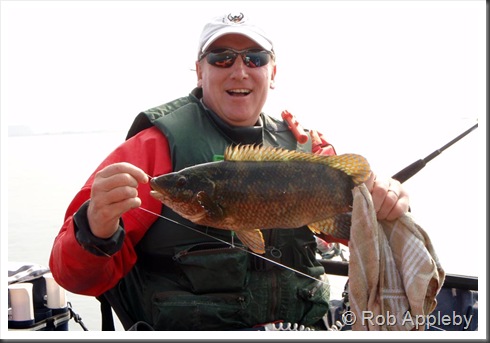 It turned out to be one of those days when the other bloke next to you was catching away whilst you just sit there getting a suntan. It transpired that Jim had a handful of ragworm that he'd been gifted whilst chatting to a local bait digger, it being the worm that was catching the fish. Sadly I had no worm, hence no fish. That's the trouble with fishing, you just cant cater for every possible bait option.

I tried a couple more fishy looking marks without any joy. 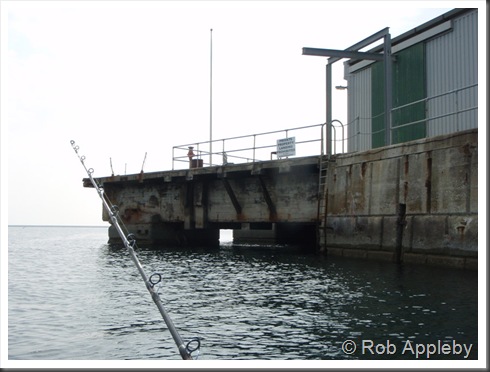 Finally a small wrasse in the dying moment of the session saved the dreaded blank. All said and done though, what with the shelter from the wind, the fantastic sunshine allied with the lovely scenery, the session was a cracking one. I'm sure the venue is capable of producing some good fish, though I suspect it'd fish far better from dusk going into dark, something to try in the future.

Another pleasant paddle returned us to our launch point, checking the track log later that evening I'd clocked up just over 5 miles yet I'd actually covered only a small area of the harbour. Clearly it's going to take several trips to get a feel for the various marks around the harbour.

Apparently the harbour fills up with mackerel in the summer months and the bass fishing can be quite prolific. There are also several wrecks along the harbour walls, one wreck is actually situated in one of the harbour entrances (HMS Hood).

Despite the fact I just saved the blank, I'm quite looking forward to my next visit there.

Hi Rob
Where did you park as I intend to travel down from the Midlands in the near future and have a go. I have not fished Portland harbour before so it will ne a new experience!!

Hi Chris,
find Old Castle Road on the north side of the Harbour. Funnily enough there's an old castle halfway along it!. Drive down the hill and you'll find a boatyard at the bottom. Less than 100yards before the boatyard, there's parking and a steep slipway on your left hand side. From there you can trolley the kayak a short distance down to the beach and lauch. Good luck!

HiRob, Do you need a permit to paddle and fish in the harbour?

Hi Phil
you have to pay 'harbour dues' which I believe are currently £3.50

The best thing to do it take some money afloat with you and if you're approached by the Harbour RIB you can pay them. If you don't get bothered, well you've saved a few quid!. There are rules as to where you can and cannot fish, the main one is that you are not supposed to fish within 150m of the breakwaters...