I lived in Cornwall for about five years, moving away in about 2001. For various reasons I didn't fish too much during those years, though the shore fishing that I did experience was at times quite good.

An opportunity arose to visit the Helston area last week, so it seemed quite logical to take the yak in the hope of some fishing. Though the weather was looking rather gloomy with fresh winds and heavy rain forecast for the duration of my visit. Being pretty familiar with the area I'd chosen a handful of launch points that'd cover most wind directions, to a point.

That evening I arrived at the first 'sheltered' venue. The wind was blowing offshore at steady 20mph, gusting to 30mph, and it was raining steadily, not ideal!. Relaxed in a local fish n'chip restaurant for an hour in the hope that the weather would improve, needless to say it didn't which ended any hope of getting out that evening.

Sadly work kept me busy the following day till around 6pm, though the weather had improved somewhat and it was no longer raining. The wind direction had swung around by almost 180 degrees so an alternative launch venue on the south coast was chosen. 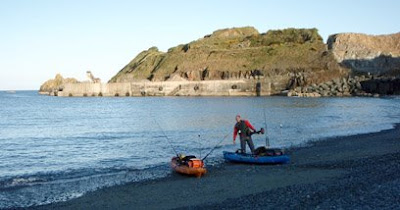 The area is well known for its reef, the Manacles, which stretches out over a mile. A popular dive area, it can also produce some excellent fishing. It was my first experience fishing here on the yak and it was going to be dark within an hour, so the plan was to within 1/2 mile in the hope of some conger and bullhuss, with the chance of several other species too. 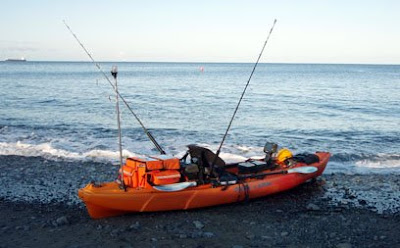 The ground is incredibly rough, well suited to trolling lures and jellies, float fishing etc. The various drop-offs are populated with lobster pots which allow a convenient point to tie off and bottom fish. However, I'd neglected to pack my buoy rope so I paddled around looking for a sandy patch to drop anchor. Once achieved, fishing commenced and the dogfish quickly made an appearance.

Several dogfish later I moved on looking for another spot, again dogfish kept making an appearance. I wasn't fishing alone, fortunately for Jim he'd remembered his buoy rope and was tied off on a drop off which was producing conger eel, some a decent size though the better ones bit him off. By the time he'd upgraded his traces the sized dwindled as the top of the tide was reached.

It was only a matter of time before I lost my anchor, and I did. I was carrying a spare, though whilst looking through my spares box I came across my 'emergency' rod leash, basically a length of bungee cord with a clip at each end... a makeshift pot buoy leash if I ever saw one!

Once anchored over a reef edge I started catching conger, though the ones I managed to get to the surface were quite small, the best being 6-7lb. 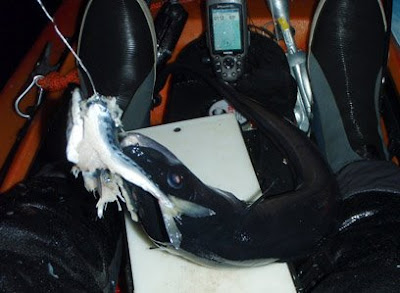 There we no doubt some big eels down there, though I wasn't fortunate enough to hook up with one. We fished until 2am, making the trip over six hours, my final tally being eight conger and seven dogfish.

Being anchored up there at night though was a fantastic experience. The water clarity is excellent, glancing down would reveal objects several metres deep.

At about 11pm I was sat in the large circle of light be produced from the stern light. About twenty metres ahead of me I noticed four white marks in a tight diamond shape coming towards me, just below the surface. As they drew close I realised they were fish, four school bass around 2-3lb that passed right along the side of the yak less than a foot under the water, simply awesome. A couple of hours later they passed right by the yak again heading out to sea, you don't need to be catching to be enjoying yourself at times like that.

The were countless Pipe fish up to a foot long drifting in the water, only inches under the surface. On several occasions I touched the back of one as it came close which promptly caused them to shoot off like the proverbial bat out of hell!

As we fished close in, the evening consisted of about 3 miles paddling, with me trying four different marks. 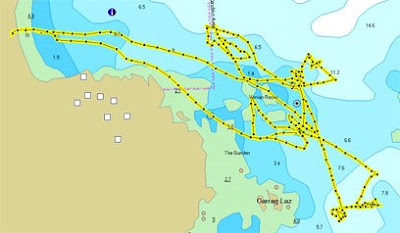 Disappointingly the weather blew up again the next day, the day we'd hoped would produce a long day session allowing us the opportunity to explore the reef, trying a few different tactics. However, it was not to be.

There are plenty of fishing opportunities in the area, definitely somewhere I'll be visiting again, great scenery and great fishing, what more could you ask for... well, maybe a 40lb conger!!

Hi Rob, great blog stacked with information for anyone wanting to try this aspect of the sport and it certainly looks and intersting and exciting way to fish

i leave for Heleston Cornwall today Jul 6th 2012 for two weeks yak fishing and beer drinking today blog most helpful look out for a yellow trident 13 and the Mrs on a Tarpon 100 do say hello if you see us!