A glimpse of summer !

It was around this time last year that the first mackerel started to show. I just hate buying the blast frozen AMMO bait, it's small and tends to go mushy when thawed, expensive and disappointing. Last year I made the mistake of not catching them in quantity when they arrived in May/June and departed soon after, something I intend to repeat this year.


I've heard of the odd mackerel being caught here and there, not in any quantity though. I decided to carry out a recce mission of sorts to see what, if anything, was out there.


I was joined by a couple of new yak fisherman, both called Andy. They've both purchased new Ocean Trident 13's, one of which I've spent many hours rigging and the results were very pleasing, well Andy was certainly pleased and that's the main thing. I'll probably put a post up at a later date reference the rigging of his Trident 13. 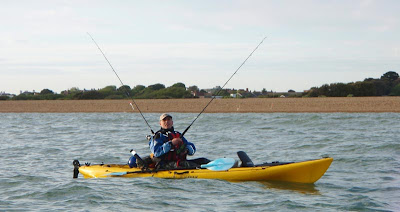 We paddled out early evening into water that varied from 5-20m, drifting around various spots in an attempt to locate some mackerel. I was in almost immediately, only a single fish but nevertheless it was a good start. We all started to catch, albeit very slowly, all single fish here and there. The fish seems very close to the surface, with the best result coming from trolling feathers behind the yak.


At one stage my rod tip bent over nicely and on feeling the weight I was convinced I had a full string of mackerel. However, that wasn't the case, a single mackerel and a nice bass, cracking! 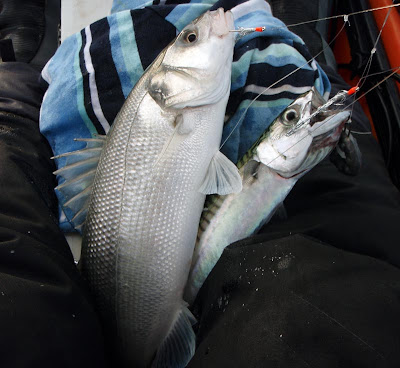 As the sun dropped so did our chances of picking up anymore mackerel. I ended up with half a dozen, with us taking around 20 between us. Hard work for sure, though hopefully the numbers will increase quickly and my bait freezer will start to fill up. 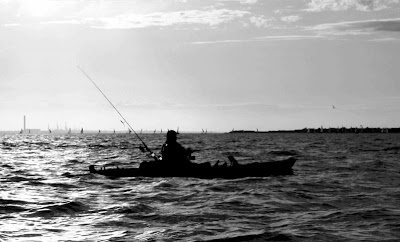 I paddled ashore, de-rigged and headed further along the coast in search of some early smoothounds. They were certainly out there as I had several good takes to peeler crab. However, I failed to hook into anything for more than a few seconds, very frustrating!. I fished until midnight before calling it a night. I have since made amends with a recent night trip producing my first smoothounds of the season - see my previous report.
Email ThisBlogThis!Share to TwitterShare to FacebookShare to Pinterest