Due to the recent poor weather I haven't accrued much time on the water, very frustrating I'll tell you. I managed a brief trip out early in the week where I had half a dozen hits of smoothounds and failed to stay connected with one for more than a few seconds, maddening.

However, the Bank Holiday weekend has been blessed with some decent weather so a fishing trip was on the cards. I've spent the last couple of days fitting a rudder to my yak so I was still disorganised from my last trip out, gear was hanging from everywhere in the garage.

I decided on an evening session, arriving at the beach around 8pm. I took a chap totally new to the sport along, though not new to kayaks. We fished quite close in and immediately the weed was proving to be a real headache. We persevered for a couple of hours and were about to move further offshore when I had an aggressive take, and I was hooked up!

I cant do these fish justice, they really are cracking sport on light tackle. Not a big specimen, but a lot of fun, more importantly it was my first Starry Smoothound of the year. 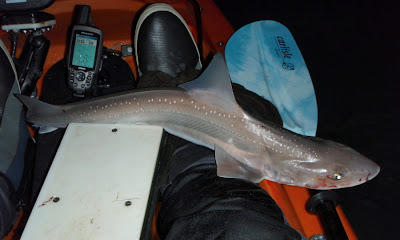 The weed was getting worse making it almost un-fishable, so the decision was made to head offshore. As I'd managed to forget my anchor I was restricted to tying off to buoys. Navigated to a marker buoy 1/2 a mile away, my GPS earning its keep. It certainly impressed the new chap, paddling off into the night, with me finally calling out that it should be coming up. There it was, directly in front of me, a 3' high un-illuminated buoy. Yup, a GPS loaded with charts is a cracking piece of kit.

The new mark wasn't proving too productive, well, not for smoothounds anyway. However, there was little weed plenty of dogfish!. The new chap was dragging anchor and heading downtide a bit too rapidly for my liking so I retrieved my gear and headed off after him.

We took a chance and headed back inshore to another mark in the hunt for another smoothound. The tide was much less and this was reflected in the fishing, it was slow. Patience paid off though as line was stripped from the reel, smoothound on!. This was clearly a better fish and it really came alive as it neared the yak. Some hard runs and even some acrobatics, totally airborne at was stage, absolutely brilliant!!!. Apologies for the fuzzy photo, it'll teach me for only taking one... 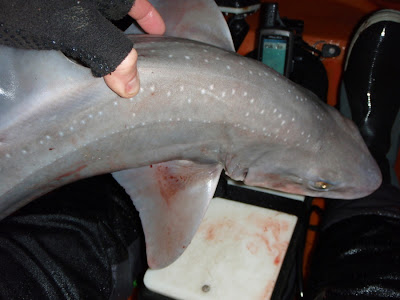 We fished til around 2:30am before calling it a day. The new chap managed a handful of dogfish, sadly no hounds though the season is just starting. I'm sure he'll hook into one soon enough and then he'll never look back!. I was well impressed with him, first trip out yakfishing and he fished into the dark without so much as batting an eyelid. Admittedly it was a perfect evening and I was always close by, though well done that man!

I've spent the last couple of days fitting an anchor to my yak. What a difference, I'm most impressed. Not only does the yak track brilliantly now, the ability to tweak your course makes the paddling experience so much better. As the fitting instructions supplied with the rudder were simply rubbish, I'll post a 'how to' article shortly.