The weather forecast was just about perfect with the temperature forecast to be around seventeen degrees and little or no wind. After a few family tasks during the morning I loaded up and headed to the launch point, arriving around low water.

The air temperature was just nudging past six degrees and the visibility was under half a mile, not quite what the weather man had promised. However the wind was almost non-existent, at least they got that bit correct.


I paddled out a few hundred metres to meet my yakfishing partner who'd been on the water since 0830, it didn't sound to promising as he'd only managed a solitary dogfish. As he headed in for lunch I paddled out into water of around 10m about 3/4 mile offshore. 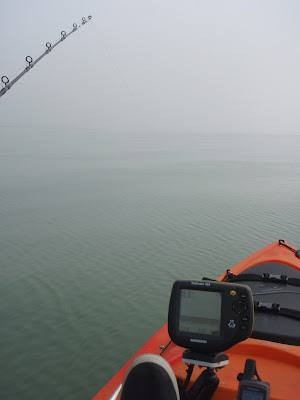 I'd heard the odd report of small smoothounds making an early show, with that in mind I fished one rod baited with crab, the other baited with a lash of mackerel in the hope of a thornback. Visibility wasn't great making me wish I'd brought my stern light with me.


Within minutes I had a rattling bite which produced the first dogfish of the day, quite small but at least I was off the mark. 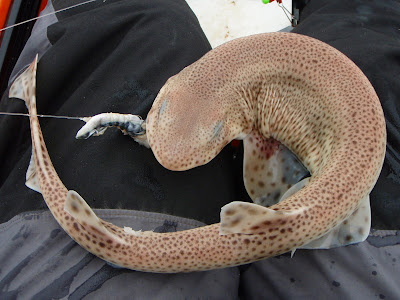 By this time the tide had completely slackened and the fished somewhat died the death. I decided to paddle an extra half mile offshore taking me to a sharp 20m drop off. Again the baits went down and it wasn't long before the dogfish homed in on my mackerel bait. Despite the fact I'm no big fan of dogfish, it beats blanking ! 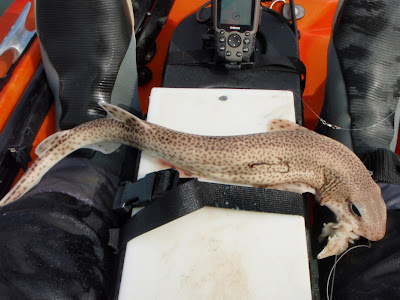 Several vessels came sailing close by, one in particular, a large 'Gin Palace', was smoking heavily and left quite an oil slick drifting past the yak. A while later a larger shape appeared in front of the yak, slowly growing as time went by. It was clearly on a direct course to me which was slightly disconcerting. I was making plans to reel in sharpish and drop anchor in order to make a sharp getaway, however, with about 300m to go the vessel made a course adjustment moving away to one side, excitement over. The other option would have been to call him up on my radio, though I considered that getting out of the way would have been the better option. 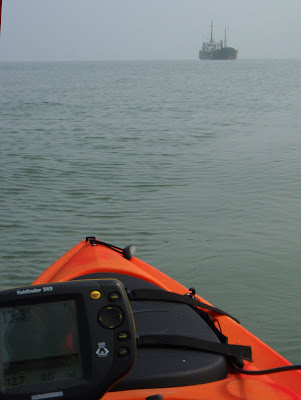 I only fished for around 3 hours, catching around ten dogfish in total. Chatting to a boat angler at my launch point, the party of four had taken about thirty dogfish throughout the day. So it seems it's dogfish season at the moment.


A few shoals of fish passed below the yak during my session, possibly early mackerel ?. The shoals were so few and far between it wasn't worth dropping a set of feathers over the side. The smoothounds should be here by the end of the month, something to look forward to.
Please feel free to comment.
Email ThisBlogThis!Share to TwitterShare to FacebookShare to Pinterest

Nice report Rob. Dogfish can be annoying, but they are pretty! What is a smooth hound anyways?

Smoothounds are small sharks that visit us for the summer months, running from 3-20lb. Once they hit 7lb+ they are a lot of fun on lighter gear, taking runs of up to 30-40 yards. The smaller fish will start to appear in May.

Here's a report from last year:

Ten fish in a session's is something us shore anglers dream of Rob, that's a good haul is that!

Was wondering what sort of visibility you get under the yak with the fish finder? Can you see a shoal of mackeral approach and drop feathers in a hurry if you had a rod at the ready?

All the best,
Paul

Hi Paul
thanks for the comment. Last year I was drifting over deep water watching shoals of mackerel pass through. If I was feathering deep I could retrieve fast and catch a shoal that was towards the top, quite handy!.

You can generally see the feathers on the fishfinder, to a depth of 15 metres of more.