I’ve spent the last three days re-rigging my kayak, incorporating some GearTrac along the way. The positioning on the GearTrac was dependent on several factors. One of those was where to position my PanFish camera/video mounts.

The PanFish comes in two models, the standard PanFish and the PanFish Portrait. The biggest difference between the two mounts is the height, the PanFish coming in at 28” whilst the Portrait is considerably smaller at 6”.

The PanFish was specifically designed for ‘over the shoulder’ video with lightweight cameras. This basically covers most point and shoot cameras up to a maximum weight of 1lb. The PanFish is basically a split mast with the top half able to rotate. The amount of friction experienced at this joint is adjustable, something that will no doubt prove useful after prolonged use and the associated wear and tear. It’s marketed for use with Scotty mounts, MightyMount  and track systems, specifically the Wilderness SlideTrax and the GearTrac, though it’s also compatible with other track systems. Whilst looking over the PanFish I noticed that the MightyBolt (T-bolt) can be removed and replaced with a threaded RAM ball. Out of interest it’s also is a snug fit into most flush mounted rod holders. Clearly it has many mounting possibilities!

At the top of the PanFish is a 1” RAM ball and for a few extra dollars it comes ready equipped with a RAM camera mount, clearly this is the way to go. As much as it’s marketed as an ‘over the shoulder’ camera mount there’s no reason it can’t be mounted ahead of you. I took things one stage further and repositioned a flush mount rod holder (I never use them) so it was effectively positioned 90 degrees to the kayak. The PanFish is a perfect fit into the flush mount, in fact it makes a pleasing ‘popping’ sound when pulled out. So what’s so great about mounting it in that position?. Well it provides yet another camera angle, perhaps a more interesting one in my opinion. 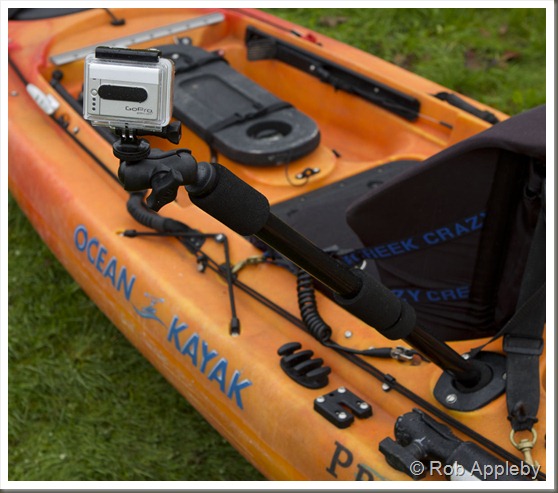 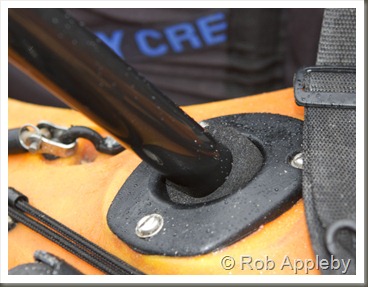 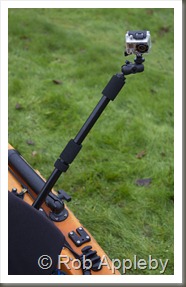 Of course it can be mounted directly into the GearTrac, MightyMount, etc. Fitment to either is quick and easy, taking only a few seconds. 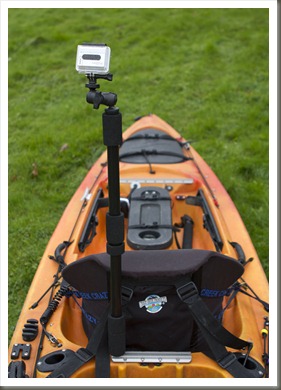 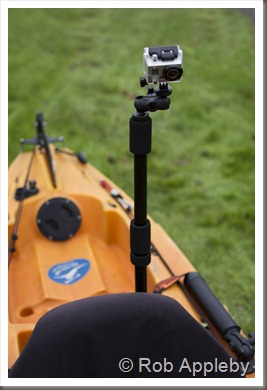 The PanFish has comfortable foam grips to rotate the mount when required. The foam adds buoyancy which enables the PanFish to float. I’ve not tried it with a camera attached, though I’d imagine that it’s still likely to float. The RAM camera mount makes for easy positioning of the camera helping you achieve the best angle for a photo or film.

That pretty much covers the PanFish, which takes me straight on to the PanFish Portrait. This is basically a miniature version of the PanFish and is ideally suited for positioning ahead of the angler/paddler. The camera mount itself is a RAM item, hence positioning and locking the camera into the best position is quick and simple. The whole mount swivels even when fully locked into position (friction can be adjusted), this provides a couple of useful facilities. A mounted camera can be turned around allowing easy access to rear mounted controls, self timer controls, etc. The camera can then be rotated back ready for that ‘Hero’ photo!. 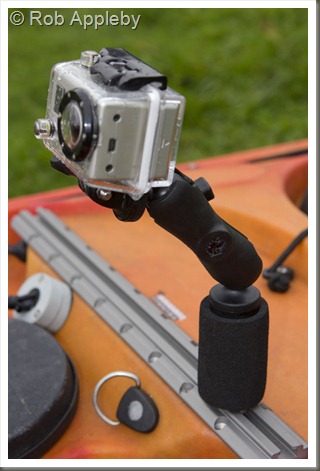 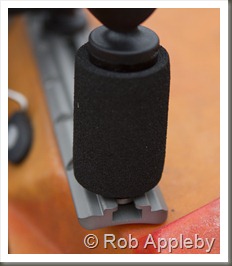 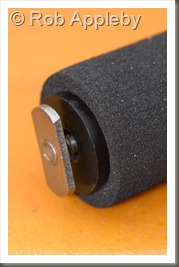 The PanFish Portrait is able to support heavier cameras of up to 2lb in weight. My photos show it mounted in some GearTrac, however, as per the PanFish it has multiple mounting options.. Scotty, SlideTrax, MightyMount, etc. It’s easily swapped from one GearTrac or MightyMount to another so its position can be quickly changed as required.

So, is that the end of YakAttack’s camera mounting options?…. nope!. They sell an item called the ‘Dog Bone’. It’s a foam covered tubular mount with a 1” RAM ball at either end (hence the ‘DogBone’ name!). At a glance it doesn’t appear to be much, but with a little thought it’s an incredibly versatile piece of kit. I swapped the 1” ball for a 1.5” ball at one end, purely as I’d run out of 1” RAM double sockets. I also felt this would potentially increase its rigidity when mounted in certain positions. As much as I used a RAM ball mount, it’s possible to swap the mount to make it compatible with the GearTrac, MightyMount, etc. I know, I said that for the PanFish range as well, ingenious or what!

I decided to have a play using a MightyMount with a 1.5” ScrewBall installed. 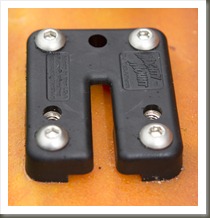 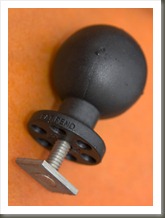 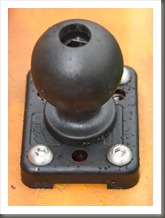 The DogBone was attached to this with the aid of a 1.5” RAM double socket. So how did this all work out?. Great!, hopefully the photos below should explain my setup reasonably well. 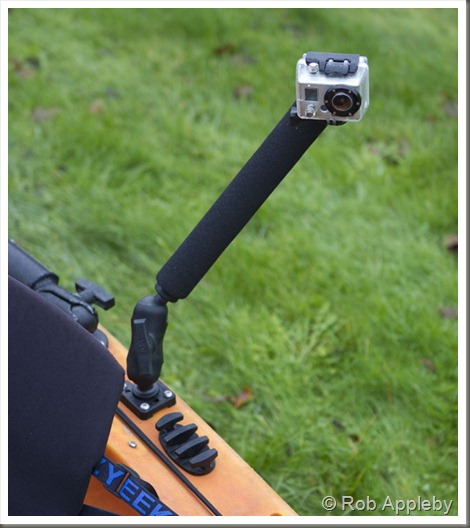 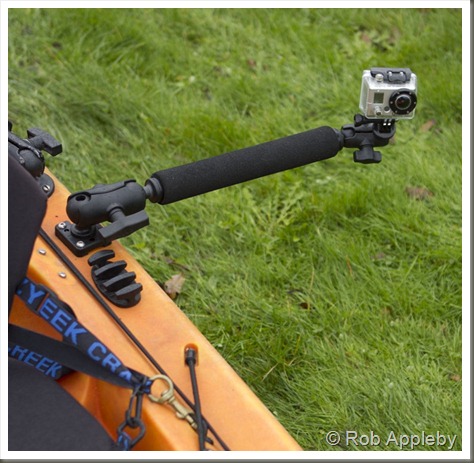 I really love the underwater position shown below!. With the upper RAM mounted loosely tightened the camera is easily rotated to any chosen position, full 360 degree coverage!. 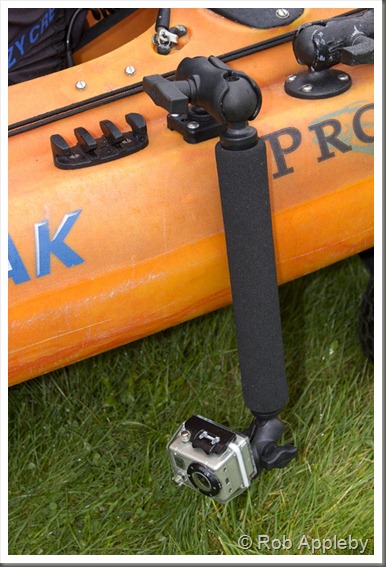 From the photos above it can be seen that with a little thought when positioning it, the DogBone can be cover many potential angles!. I’ve only experimented mounting it in a MightyMount, placing it in the GearTrac will no doubt open up yet more possibilities.

In over four years I’ve struggled to find a particularly versatile camera mount. In one day I’ve now had a play with three!!. These latest camera mounts from YakAttack are well worth a look. Like their other products they are top quality and innovative, keep them coming!

I have a feeling that your Awesome fishing videos are about to transform with all the new camera angles.

Well I should certainly be able to add something a little different now :)

Nice one , Thanks for sharing this im going to get a track for my gopro now.
Excellent site by the way nice to navigate and great content

Great setup. Gave me so good ideas for my yak.