Pain, grief and lots of swearing!

I’ve spent the last couple of days de-rigging the kayak and re-rigging it with some GearTrac. I’ll post more on this later as I’m not finished yet, well my body is, so many aches, pains, cuts and scratches. I’d almost forgotten how much fun rigging can be!

The old aluminium RAM ball mounts were badly corroded ad looking extremely tatty. I took the opportunity to unbolt them and fit some new composite RAM balls in their place. That wasn’t terribly difficult, well not in theory anyway. However, I’d fitted them as far back as possible using nuts and bolts, access to the nuts is via the centre hatch. It’ s a heck of a stretch and highly uncomfortable, it didn’t seem quite so difficult when I fitted them in mid-1997. Yup, it’s official, I’m getting old! 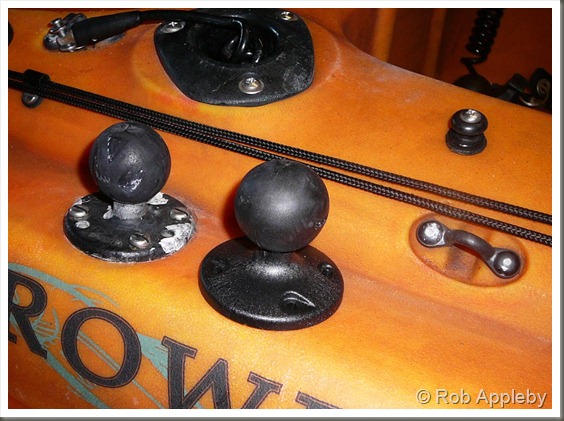 Anyway, with that job out of the way I did some work on the rudder system. It’d been stiff to operate for some time, so it was stripped down, inspected, cleaned and re-assembled. Post that work it was far easier to operate. I took the opportunity to fit a couple of drilled plastic balls onto the operating ropes to give an improved handhold when pulling on the ropes to lower/raise the rudder.

I also moved the zig-zag cleat as I always fold my rod tubes back these days. In the early days I folded them forward so it was placed up on an edge adjacent to its new position (see the bolts). It was subject to getting knocked when loading onto the roof of the car and finally broke last year. At least in this position it should be safe from abuse! 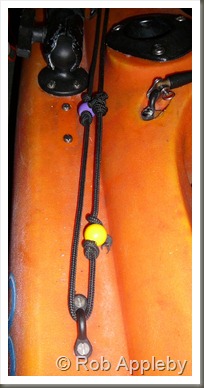 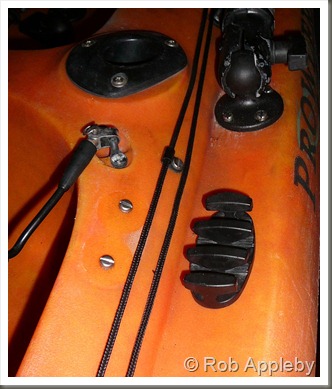 However, all that was simple compared to how the next job turned out!. One of the flush mounts had not been watertight from new. Fill it up with water and it’d drain in down in seconds. It explained how I’d take on a few cups of water in a choppy sea. So the plan was to remove them, seal them up, then to re-fit them. Three screws, how difficult could it be?. The screws fix into well nuts, a fitting that I hate with a vengeance. The first two came out just fine, though the last one was seized and just turned. I was soon back to being a contortionist and managed to get a small pair of mole grips onto the well nut. I’d get a few turns if I was lucky then the moles grips slipped off. I’d struggle to re-attach the mole grips before getting a another turn on the screw.

It eventually came out and the old well nuts were cut out. I considered fitting nuts, bolts and washers though access was clearly a nightmare so I fitted some new well nuts. I managed to break two of them just as I was reaching the desired tightness… not impressed!!!!

I had a hell of a job removing them and once off (about 45 minutes later!) I decided to attempt to fit nuts, bolts and penny washers. It was a rather tricky job, I do believe that I might have sworn… many times. It was a good 90 minutes to finish that job. I still have one left to do, should I leave it??, I feel as though I should give it a wide berth. That said, I know myself, I’ll be swearing again tomorrow, I will win!! 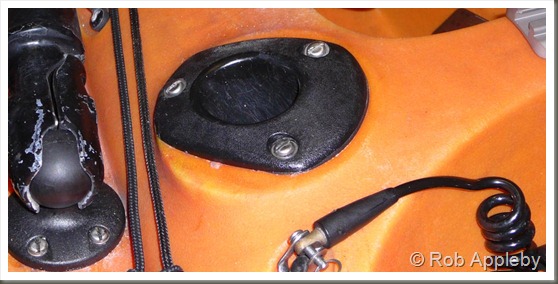 The wiring loom that runs from the front to the rear of the kayak had come adrift so that was suitably secured using plastic P-clips to existing nuts/bolts passing into the hull. I’m sure I’ve tackled other minor jobs as the day progressed. There’s quite a bit of work left to do, though right now I need a hot bath and some liquid refreshment to ease the pain.

I know what you mean Rob. Refitted my flush mounts on the big game and replaced those useless well nuts with nuts and bolts along with a backing plate. Not easy but a worth while job and they are much more solid now.

Hi Juanrra,
thankyou for you kind words. Best of luck fishing from the Tarpon 120, tights lines to you.